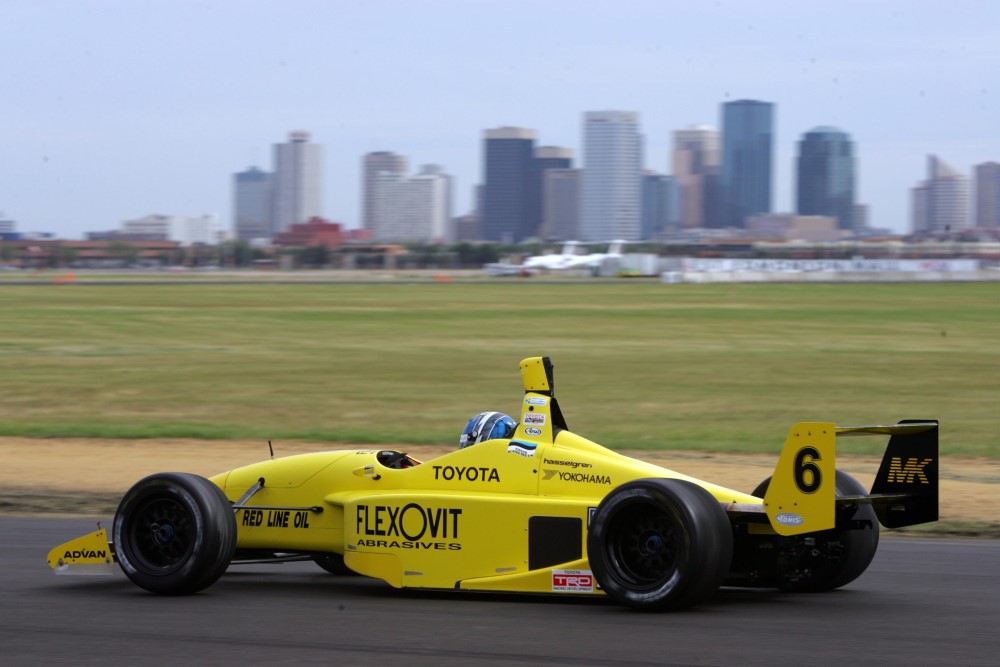 It wasn’t a lot of ground to make up, but every single point counts in a tight title race and Tonis Kasemets (#6 Flexovit Abrasives/MK ind./TMI/Redline Oil) was happy to earn the championship point for leading the first round of qualifying Friday for the Toyota Atlantic Championship Presented by Yokohama race in Edmonton.

Kasemets (pictured right), the second-year native Estonian racer, found his speed at just the right time in the 30-minute qualifying run for Sunday’s Round 8 of the Atlantic championship – the Napa Auto Parts Presents the Toyota Atlantic Challenge (tape-delayed broadcast on SPEED Channel – Saturday, July 23 at 2 p.m. ET). After finishing fourth in the opening practice session of the weekend Friday and sitting middle of the pack for much of qualifying, Kasemets ripped off a lap of 1:07.678 (104.950 mph) on the challenging and fast 1.973-mile Finning International Speedway airport circuit with just two minutes left in the session. The lap represents a new track record at the course, that’s new to the Atlantic schedule this season.

Perhaps most importantly, Kasemets also earned a point for leading today’s session and he now trails series leader Charles Zwolsman (#11 Landtran Systems, Inc.) 186-180 in the tight point standings. Zwolsman owned the fastest time for a good portion of qualifying but suffered suspension damage to his car with about 10 minutes remaining in qualifying and was forced to pull into pit lane while his team made repairs. With rain in the forecast for the final round of qualifying on Saturday, Kasemets also helped his cause by locking up a front-row starting spot for his efforts on Friday.

A capacity crowd of 55,722 Canadian race fans turned out on Friday, welcoming not only Atlantics, but also the cars of the Champ Car World Series and the Trans-Am Series Road Racing Series to Edmonton.

The enthusiastic faithful witnessed Kasemets’ clutch qualifying performance, as well as solid efforts from two more of open-wheel racing’s top up-and-coming stars. British driver Katherine Legge (#12 PKV Racing) had an impressive day for Polestar Racing Group. The 24-year-old racer that made history when she became the first woman to win a major open-wheel race in North America, capturing the checkered flag at Long Beach in April, turned in her best qualifying result of the season on Friday. After carding the second-fastest time in practice this morning, Legge backed it up in qualifying as she earned a top time of 1:07.826 (104.721 mph) on her second-to-last lap of the session. The time left her trailing only Kasemets in the qualifying rundown.