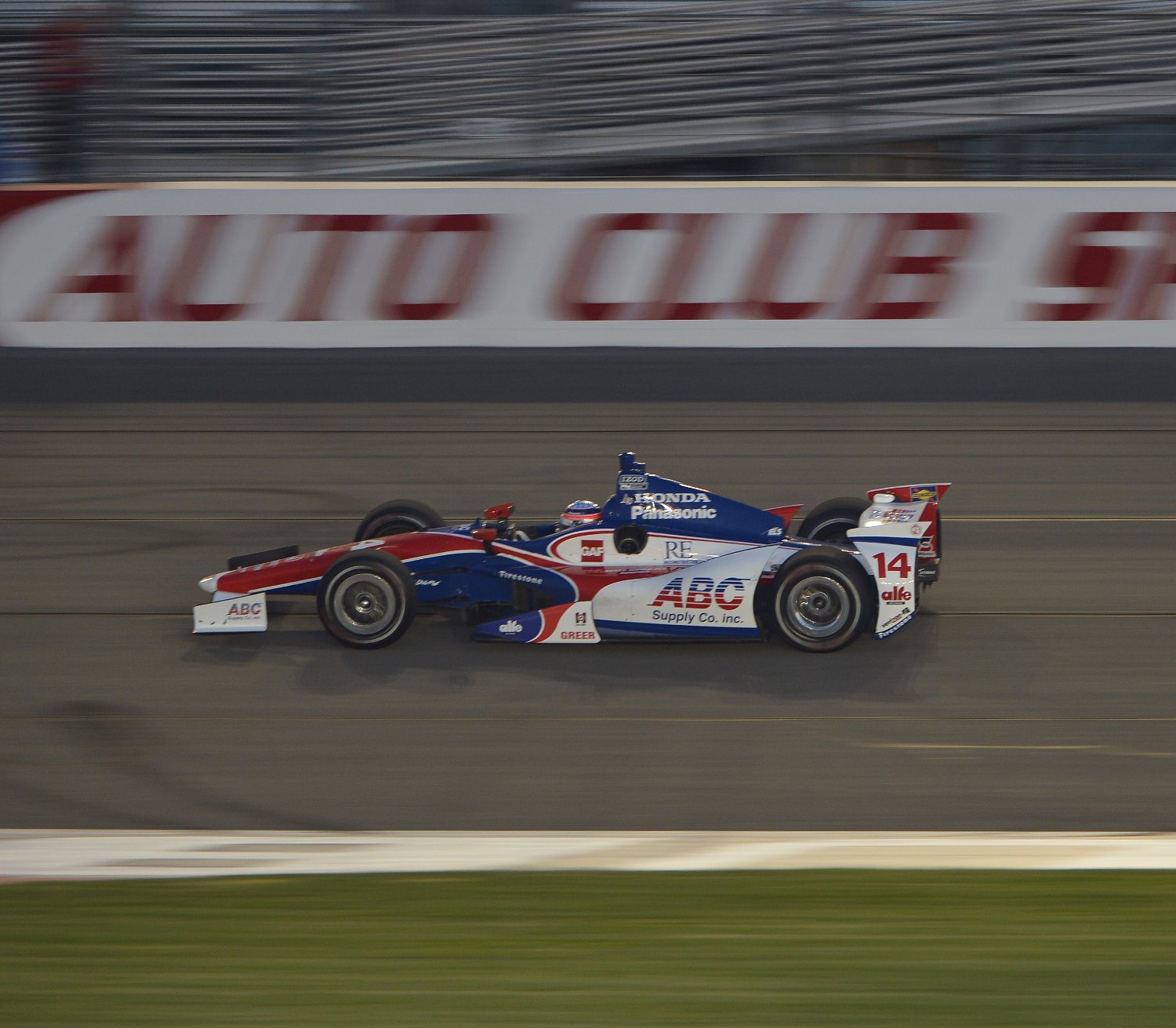 Last week, AutoRacing1 responded to a letter from a reader regarding the track surface at Auto Club Speedway. We addressed specifically, the dust of the bits of the track that came apart and got into the radiators of the Indy cars during the 2013 MAVTV 500. We also looked at the issue of “grinding" that has started as numerous race tracks in the means to speed up the process of the track gaining grip for better racing. We always exposed the potential fallacy in such thinking in that the grinding erodes the surface, and potentially costs tracks money in the long run.

The other issue that arose last year during the IndyCar race at ACS was erosion of the seams. Over the past week, the team here at AutoRacing1 has gathered some info on the issues of the seams, and today we will pass along what we have found.

To begin, seams are the separation of asphalt running longitudinally along the track surface. Many race track designers will tell you seams are the weakest part of the race surface, in part because they are difficult to compact to levels similar to the surrounding pavements. However, if the seams do not compact properly, the damage to the race surface can be significant.

Now, there have been some advances in race track design over the last decade. However, one issue is that when tracks are surfaced they have multiple paving courses, if you will. And we’ve learned there are two scenarios that are not ideal for a racing surface.

1. If the temperature from different paving segments are significantly different that hurts the ability of the surface to compact

2. Second once an initial surface is laid, if there is spillover from the industrial vehicles in subsequent track paving, cleaning or whatever else, the hydraulic fluid leaked is incredibly harmful to the surface. Even more harmful than oil or gasoline.

3. Some tracks (so we are told) do not cut a sufficient path along the seams to lay new paving in a width that can be properly compacted. This usually results in bumps as the new asphalt settles.

Also, seams will naturally widen as they wear, due to the lateral forces of the tires tearing the weaker bitumen/aggregate out along the seam path. The net result is that seams which have started to wear need to be filled and repaired.

Well, are there materials that tracks can use to repair the seams?

To start, there are numerous “sealer" materials on the market. We see sealer on ordinary roads all the time, which often create the unsightly black lines we’ve all seen. Typically, such sealer is adequate for road cars, but for example would potentially cause a motorcycle to lose traction on a hot day the filler might melt. Of course, such products would not be adequate for a racing surface.

Prevailing wisdom in the industry advocates the use of epoxy-based adhesive products. Although, it should be noted there are some that do not support such products due to their inherent slipperiness.

There is an older chemically enhanced concrete mix called Set45, which some designers one designer told me,

“Set 45 has the very valuable ability to actually react with the bitumen in the asphalt and create a firm and long lasting bond. The surface texture is also much closer to that of the asphalt paving so there is virtually no difference in grip when a tire passes over a repaired section."

As for potential problems with Set45?

Apparently, it is often confused with the simple concrete repair materials found at consumer stores like Lowe’s and Home Depot, which are not inadequate. However, because the packs and even the products look the same, track owners choose the much cheaper everyday products, which then fail. Set45 as you might imagine, is the more expensive product.

Are there any options besides sealers?

Well, tracks can entirely repave their surface, but as you might imagine a race track repave isn’t exactly a matter of coming up with a few dollars. In short, because of the costs involved, many tracks simply try to manage the ill-effects of from whatever imperfections there may be in a track surface.

So, what does this mean for the upcoming IndyCar finale at Fontana?

We've received no evidence that the issue has been addressed. For example, to our knowledge the surface at Fontana has not been repaved since last year. Also, NASCAR ran at Fontana in March and the issues with the seams arose.

We likewise know Indy Cars with high downforce ground-effects and speeds 30-40 miles per hour faster than stock cars potentially cause greater wear to the surface. And what effect will the late-August heat in Southern California have on the surface?

These are questions we cannot at this point answer. However, our research over the past few weeks does indicate that if the issue has not been addressed, there is a significant likelihood IndyCar may encounter similar problems to last year.

And we'll be following the story over the next week and a half.

With the season finale upcoming, I am concerned about the race surface at Auto Club Speedway. Remember the IndyCar race at Fontana last year when so many cars suffered overheating due to clogged radiator intakes with the track coming apart? I don’t recall anyone, even the announcers, saying anything about where the grit that filled the radiators came from. Is there any insight you guys can provide?

Brian C. here. Bear with me this is somewhat involved, and not merely an IndyCar issue. But I’ve looked into it, and there seem to be quite a few factors in play.

One, we hear the Fontana track last year had been “treated" prior to the IndyCar finale by an expensive new machine developed by ISC tracks, and used now by many SMI and ISC facilities. This machine is intended to widen the racing line for stock cars through a process of grinding the asphalt. The idea being to widen the racing groove, and reduce the slipperiness inherent in recently paved surfaces. The motivation, of course, for the tracks is they don’t want to get labeled a “boring" or “single-groove" track.

That sounds fine in theory, but our intel suggests it could be something of a total fallacy.

Using Fontana as an example, "treating" the surface seems to have created very fine grinds that slipped into the voids in the asphalt. Such grinds are brought back to the surface by the passage of race cars. In the case of Indy cars which have powerful ground effects, the problem is escalated. And no normal track washing, sweeping or jet blowing can remove grinds from beneath the surface.

There is also the issue of the seams, which is an altogether different matter that I will try to address separately at another time.

However, the consequence of the grinding is that cars suffered from this grit filling their radiators. Here are the issues involved:

1. Track surfaces have a shelf life of somewhere around 10 to 12 years. This means that resurfacing (very expensive) is required about once a decade, and the costs have to be amortized over the length of the surface life.

2. The grip or slip resistance factor of the asphalt is a carefully calculated component of the final top surface “wear course" mix design. While an engineer might want 100 percent grip, this would result in 100% tire wear and the track would not only be extremely abrasive.

Alternately, zero or very low grip would be dangerous, and under some circumstances like rain, cars might actually not move at all.

So the ideal grip quotient has to be somewhere around the 50% mark.

3. A new surface will always start off quite slippery as the asphalt needs a sufficient time to “cure". This is essentially the same as the bitumen reacting with the oxygen in the air to harden sufficiently so as to become completely stable. Very few track owners allow the six months that this really requires, and start operations sometimes even the day after paving, but typically within three weeks.

4. The best way to improve the grip in new tracks is to maximize its use, once the cure period has passed. This allows rubber to be integrated into the voids and adds to the slip resistance of the surface. It also prevents abnormal wear of the grip surface, which would otherwise add to the slipperiness as small bits of aggregate and bitumen are torn off the surface by the high grip tire compounds.

Now, one issue facing the tracks is everyone essentially wants them to pick up the bill when there are issues with the racing surface. Here is a good example.

Of course, the tracks share in some of the expense, and one-groove tracks exacerbate the already dull NASCAR follow the leader racing. But screwing up their race surfaces IS NOT THE ANSWER!

What could be the solution? The lowest cost option is probably to explore the tires, which are the lowest cost to help ‘rubber-in’ a track. NASCAR, however, probably doesn’t want to force Goodyear’s hand and in turn passes some of the costs onto the individual tracks. The tracks, which don’t want to lose a valuable Cup date, go for the quick fix with the track surface.

How will it affect the IndyCar finale this year? It’s a story we will definitely be following, and we have started this thread for it. We don’t know what has been recently to the surface or if there have been specific measures to address the problems IndyCar had in 2013. But with overheating last year in mid-October, one has to imagine it’s going to be an issue again this year with a late August race.

Thanks for reading AR1 and taking the time to write. We hope this helps.