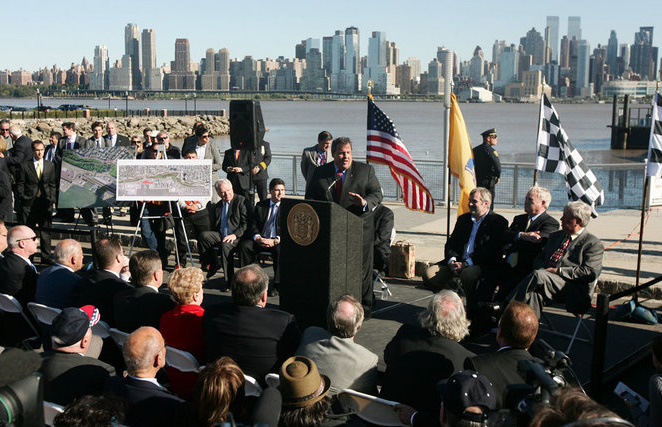 Formula One could lose its chances of hosting a Grand Prix in New Jersey if Leo Hindery junior, the organizer of the proposed race, doesn't get a move on. This is because the boss of the Formula E electric racing series says he too is working with authorities on hosting a street race in New York according to an article in Forbes by Christian Sylt.

Formula E launches in September and will race on ten tracks in city centers such as Los Angeles, Miami and Monte Carlo. "We are working with New York but we are kind of waiting to see what happens with Formula One," said Formula E's chief executive Alejandro Agag.

In 2011 Hindery announced the Grand Prix of America, a race which was due to take place in 2013 on 3.2-miles of public roads in Port Imperial, a district in the New Jersey towns of West New York and Weehawken. Part of the track snakes alongside the Hudson river and has the striking background of the Manhattan skyline.

The race has been beset with problems since it was announced. It has been dropped from the provisional F1 calendar twice, has had multiple management changes and has breached its contract according to F1's chief executive Bernie Ecclestone.

The organizers, Port Imperial Racing Associates (PIRA), are led by Hindery who is understood to have put more than $10m of his own money into the New Jersey race project. It is far from enough.

Last year Pitpass revealed that the race organizers had engaged investment bank UBS to raise $100m needed to complete work on the track. They are still in the funding race as Ecclestone recently said that "somebody has paid some more money for outstanding bills and they are saying they have got more money coming in. If they do what they have to do I'm happy."

Part of the difficulty in getting the race off the grid is the fact that the average annual hosting fee for an F1 race is around $27m and escalator clauses in the contracts usually increase the rate by 10% every year. However, Formula E has come up with an ingenious way of sidestepping this.

Whereas F1 races are organized by independent promoters who pay an annual fee, Formula E is arranging many of the races itself and did not charge the cities for doing so. Agag does not ask for a hosting fee but in return requires cities to provide prime positions for the race as well as assistance with the preparations and introductions to local sponsors.

"In New York the hospitality revenues would be huge so Hindery should put the money forward and he would recover it," says Agag. He adds that although the Formula E calendar is full for its inaugural season, it will increase in future. As Pitpass has revealed, when the FIA gave the green light to Formula E in 2012 it was presented with a summary of terms which reveals that the number of races on the calendar will be "10 in 2014, growing to 20 in 2019."

An event in France could be one of the next additions and it would take over another blank spot in the F1 calendar.

"Paris is ready. A street race in the centre of Paris," says Agag. "We have been looking at every place in Paris but there are really cool places where you have all the monuments in the background."

The Formula E car has a top speed of 150mph and made its first public run in a demonstration run in January on the streets of Las Vegas. It is supported by some of the most famous names in motorsport.

McLaren is making the motors, watch manufacturer TAG Heuer is handling the timing, Michelin provides the tires, Renault is the technical partner and Williams is supplying the batteries.

Last month Formula E announced that the races will be broadcast in the UK on ITV but that may change as Agag recently revealed to broadcast industry title TV Sports Markets that it only has a one-year deal. "We have other interested parties on the pay side but we wanted it to be free to air. So we want to give priority to that but then be able to re-evaluate it." This will depend on whether the series is well-received and we don't have to wait much longer to find out about that. Pitpass.com

F1 has been planning a street race amid the Manhattan skyline, but the event has been repeatedly delayed, with the main problem reportedly being money.

"We are working with New York," Formula E's Agag told F1 business journalist Christian Sylt, "but we are kind of waiting to see what happens with formula one."

Formula E's advantage, according to Sylt, is that while F1 charges promoters a fee of up to $27 million per race, the new electric series is offering its events to cities for free.

"Mr. Agag does not ask for a hosting fee," Sylt said, "but in return requires cities to provide prime positions for the race as well as assistance with the preparations and introductions to local sponsors."

"In New York the hospitality revenues would be huge so Hindery should put the money forward and he would recover it," he said.