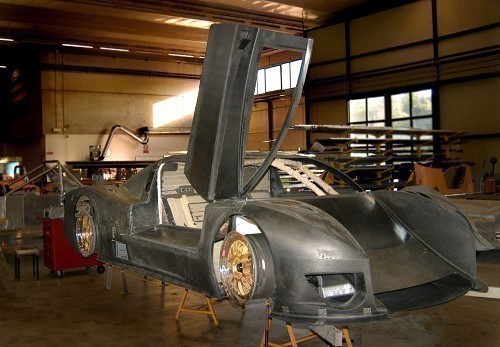 UPDATE #4 The latest word from Italy is that the NASCAR teams are sitting up and taking notice of some of the engine technology which is available now in Modena, Italy, and that High Performance Engineering, a company run by Piero Ferrari (Enzo's son) is to be developing engines for one of the NASCAR teams in 2005. It is not clear which teams are involved but with engine development largely in the hands of the automobile manufacturers Dodge, Chevrolet and Ford it is likely that the work will be done for one of them. The most likely connection is with Chevrolet as there are links between General Motors and Fiat. HPE is independent of FIAT but works for both Ferrari and Maserati, doing high-performance engine development work. HPE is owned by Piero Ferrari but the Ducati company has a 40% share of the business. Grandprix.com 01/04/05 Picchio put out a press release today that stated it would be entering into Grand American competition in conjunction with Rafanelli. No powerplant was announced, nor were any drivers announced. They are heavily modifying the stock DP car to bring up to proper race car standards. Can this be the connection to the rumored Ferrari or Maserati engine? The photo to the right came with the press release.

Press Release (as worded in broken English from Italy): Picchio and Rafanelli concluded an agreement to take part to some competitions of the American series Grand-Am. The car that will hit the track is the evolution of the Daytona Prototype DP2, on whose project several interventions and improvements have been made by the engineering team.

Picchio is appraising different options for power plants and they don't exclude also to get a new propeller, already provided in the list of engines approved by Grand-Am, but that no competitors have ever brought in races. Top Italian drivers will be favorite for driving duties because the program provides the development to be effected in Italy. This way, the great experience of Rafanelli's technicians mixed to Picchio's engineering and design resources, will allow the new cars to reach the best performances.

Differently from the existing cars in America, that Picchio doesn't recognize as its own since they were assembled by G&W, the third sample of the series has entirely been assembled in the factory of Ancarano and more than 70 changes have been realized on this prototype in comparison to the others already built. The front aerodynamics, the air intakes and the airbox are totally new. Picchio also provides power steering as a basic feature and the kinematic behavior of suspensions has been revised and optimized to adapt them to the new Hoosier tires which lately replaced Goodyear in Grand-Am competitions.

November Press Release from the team: Picchio recently announced that they are building another Prototype and will also be making plans to enter the Rolex 24 Hours At Daytona. The Picchio chassis participated in a handful of races in 2004 and campaigned the entire season in 2003. In the Picchio workshop at the moment there is a DP ready for delivery. GM Di Pietrantonio, asked about future 2005 programs in Grand-Am Series, says: "We are actually waiting to decide what engine must be installed in the car. We have many contacts going on and if we have a positive result we'll be in 2005 Rolex 24 Hours at Daytona with our Daytona Prototype and top notch drivers." And what about the rest of the season? "During the season we'll enter the competitions with a second Daytona Prototype. We'd like to create an 'antenna' in the United States and we are currently selecting partners which are able to manage a spare warehouse and assistance during the races."

01/04/05 Other sources tell us that the Ferrari effort is really for their Maserati line of cars and that the engine has been under development for quite some time waiting for a team to adopt it, possibly helping to fund its completion. 01/03/05 AutoRacing1.com sources tell us the Ferrari son is Piero Lardi (now Piero Ferrari) the Vice President at Ferrari. He was the benefactor of the Ferrari 333 Sports Car program and loves sports car racing. The work is not being done at Ferrari but one of their long term contractors. It is a Grand-Am study done for a paying customer. 01/02/05 LMSR reports that they have been told that a son of Enzo Ferrari is working on a NASCAR powerplant….and a NASCAR team has boys in Modena helping with the project…and the source is supposedly 110% reliable. Hmm…..could they really mean Grand-Am as we see no connection between Ferrari and NASCAR. NASCAR fans don't buy Ferraris.