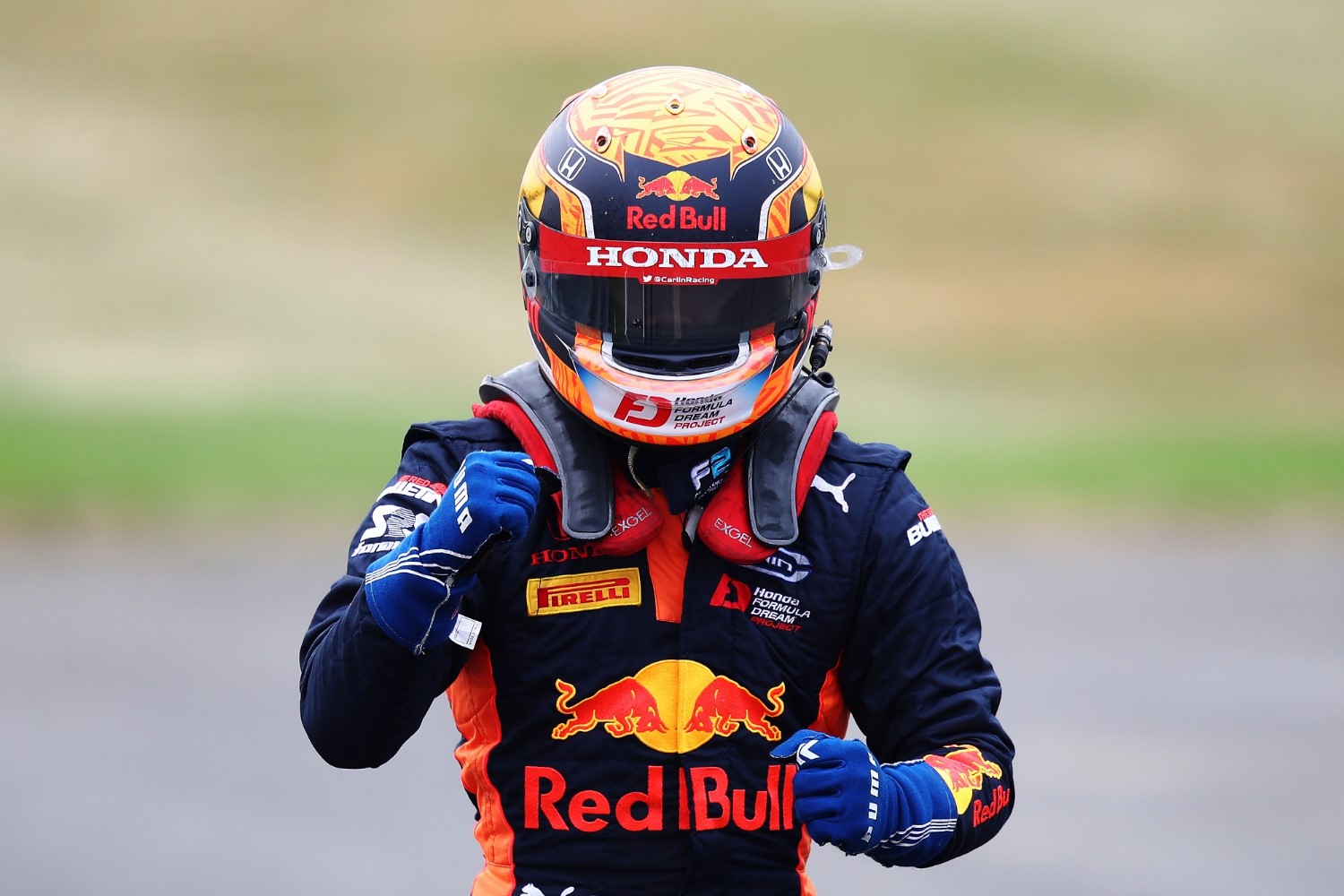 Yuki Tsunoda benefited from a sensational late collision between race leaders, and PREMA teammates, Robert Shwartzman and Mick Schumacher, to take his first ever FIA Formula 2 victory in the Sprint Race at Silverstone.

The Carlin driver patiently sat behind the PREMA duo for the first 19 laps of the race, steering clear of any drama and putting him in the perfect position to benefit from their coming together. He swept into first with two laps to go, and calmly closed out the victory to become the 25th different F2 winner since the Championship began.

Schumacher was able to retain second place at the checkered flag, and avoided a penalty as Race Control deemed the collision to be a racing incident.

Shwartzman suffered damage from their clash and dropped out of the top ten entirely. This promoted Jack Aitken up to third for his second podium of both the weekend, and the season.

Callum Ilott, who took the Championship lead in the Feature Race on Saturday, managed sixth place to stretch his lead at the top of the table by a further four points.

Shwartzman was completely unfazed at the race start, getting away cleanly off the line ahead of teammate Schumacher. The German was equally cool when the lights went out and lined up in tow of the Russian.

Schumacher appeared impatient in his desire to take the race lead, attempting an audacious move at Hangar Straight, but it failed to come off, and he lost momentum, allowing his teammate to open up a bit of a gap.

Behind them, Tsunoda had also started well, but it was Aitken who made the strongest start of all, flinging his Campos down the right to make up two places to fourth.

Louis Deletraz was all over the back of Christian Lundgaard and eventually forced the ART Grand Prix man into a mistake, as he went wide at Copse and allowed the Charouz Racing System driver to snatch fifth. The Dane lost another position to Guanyu Zhou on the following lap, as the

UNI-Virtuosi driver made a delightful dive around the outside.

There was no form of reaction from Lundgaard, whose tires were sporting visible blisters, and he fell into the clutches of the Championship leader, Ilott. Eventually the pressure proved too much. The Dane locked up several times and then ran wide, allowing the Briton past. It didn’t get any better for the Renault junior, as his left-front tire then gave way and he was forced to retire.

Tsunoda had been ticking along nicely in third, building up a 13s gap on fourth placed Aitken. In front of him, Shwartzman and Schumacher had been close throughout the race and eventually came to blows at Turn 6 with just two laps to go – handing Tsunoda the lead.

Schumacher attempted a move around the outside of the Russian, but the two made contact. Shwartzman, having led the race up until that point, suffered damage to his front wing and plummeted out of the top ten. Schumacher escaped any damage and held on to second behind the Carlin at the checkered flag.

Aitken benefited from the chaos to take his second podium in as many races, while Deletraz clinched fourth, ahead of Zhou. Ilott, Dan Ticktum and Nikita Mazepin claimed the final points positions.

Ilott retains first in the Drivers’ Championship on 106 points, with neither of his main challengers finishing in the points. Lundgaard is second on 87, with Shwartzman third on 85. Mazepin and Deletraz sit fourth and fifth. In the Teams’ Championship, UNI-Virtuosi lead with 167 points, 21 ahead of PREMA Racing. ART Grand Prix are third, ahead of Hitech Grand Prix and Carlin.

“I am really happy to take P1 today. Congrats and thanks to Carlin, who did a really great job with the car. It was quite a tough race, and both of the PREMA guys were really fast in the beginning. I could see that they were struggling towards the end, so I saved the tires as much as possible to prepare.

“I was a bit lucky for the overtake at Brooklands, but after that, I had good pace, and I am happy to take a first win."