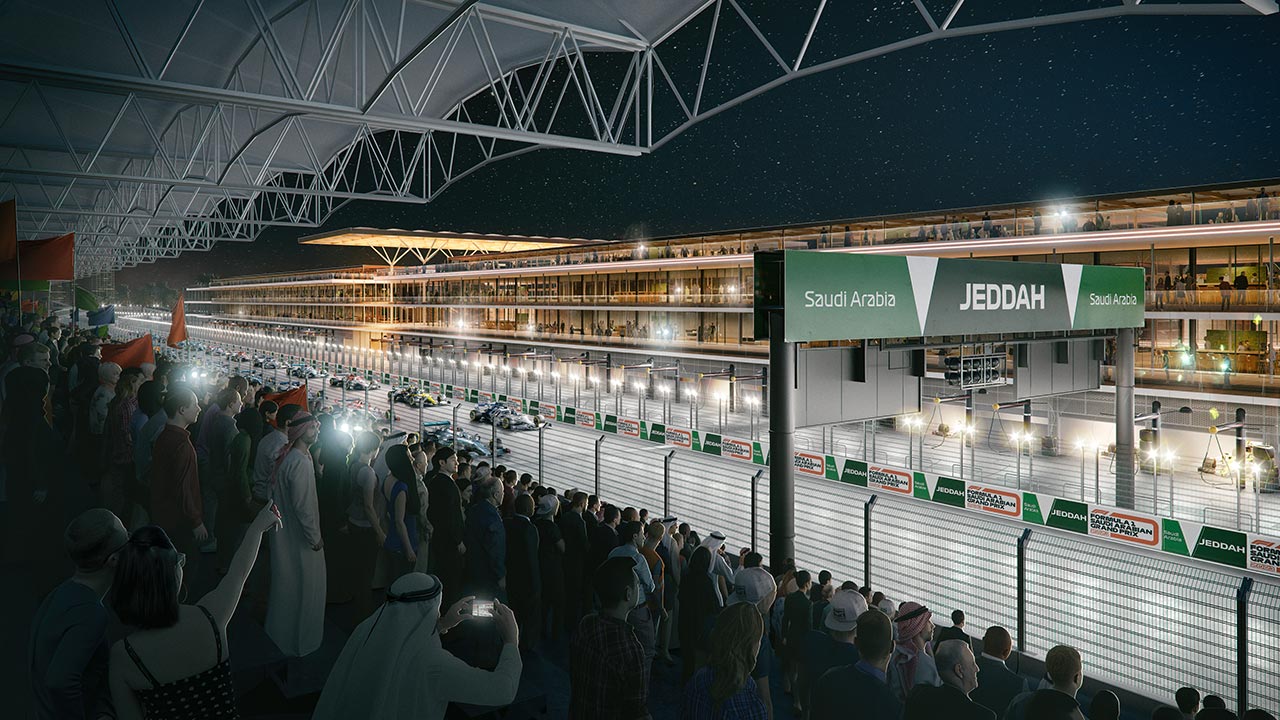 Jeddah, Saudi Arabia – In just 100 days F1 will roar into Jeddah as Saudi Arabia will host its first-ever Grand Prix. In the countdown to the inaugural race weekend, circuit designer Carsten Tilke has revealed the spectacular course will be the fastest street track in F1 history.

Motor sport fans around the world are eagerly anticipating the moment F1 takes to the Jeddah Corniche Circuit for the first time when the Red Sea port city hosts the F1 SAUDI ARABIAN GRAND PRIX 2021 on 3-5 December. 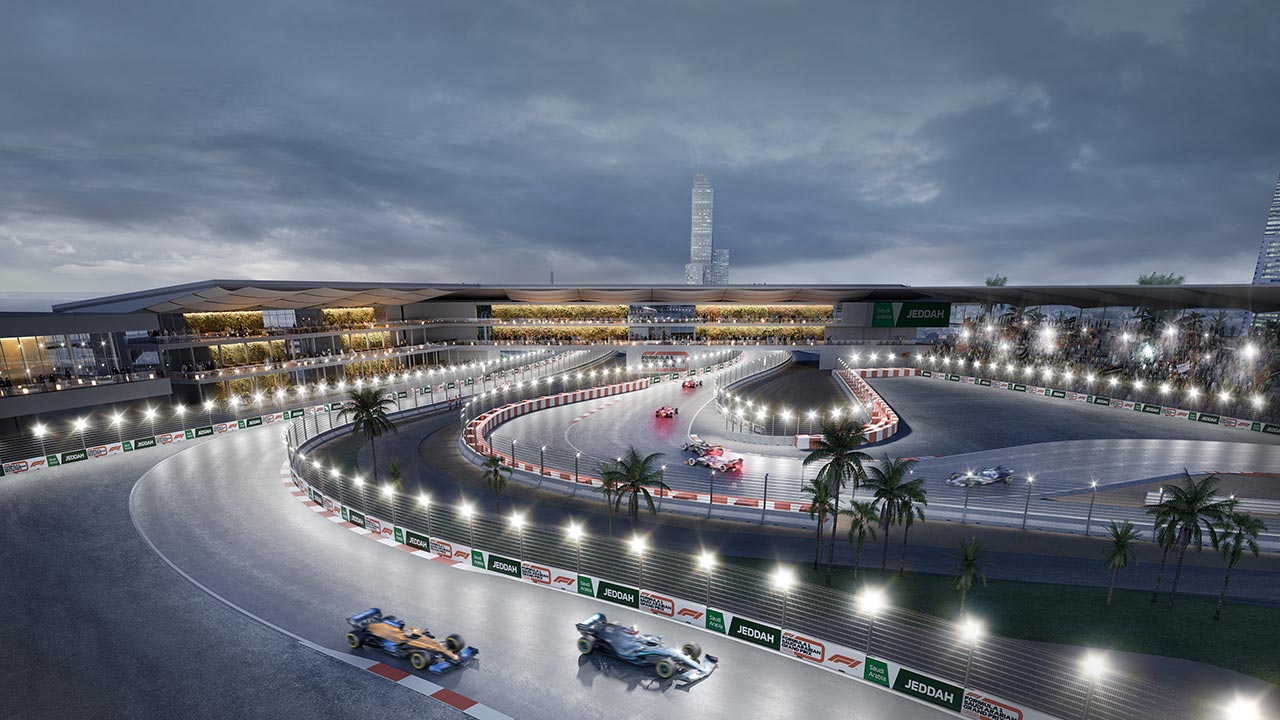 For over 30 years, the business founded by former racer Hermann Tilke has been the pre-eminent circuit design company for some of the greatest tracks in F1. His son Carsten Tilke is Managing Director of the firm with the responsibility of the huge construction project on the Jeddah coastline.

In just under 12 months, Tilke has been working in record time to create the 27 turn, 6.17km circuit that will be the second longest of the 2021 F1 calendar, after Spa-Francorchamps.

The company has joined forces with F1, the sport’s governing body the FIA, and local promoters the Saudi Automobile and Motorcycle Federation, to design a track that will thrill both drivers and spectators alike. Without the usual confines of a downtown city center, what will make the Jeddah Street Circuit unique is that the site’s location has been built from the ground-up, meaning the track has been designed with a free hand.

As a result, long straights and high-speed corners will ensure the Jeddah Corniche Circuit will have the highest average speed of any street track in F1 history, estimated to be 252km/h.

“The circuit in Jeddah will be extraordinary,” says Carsten Tilke, managing director of Tilke GmbH. “It will be a different kind of street track. What we are doing together with Saudi Arabia is amazing, it’s something the world has never seen before.” 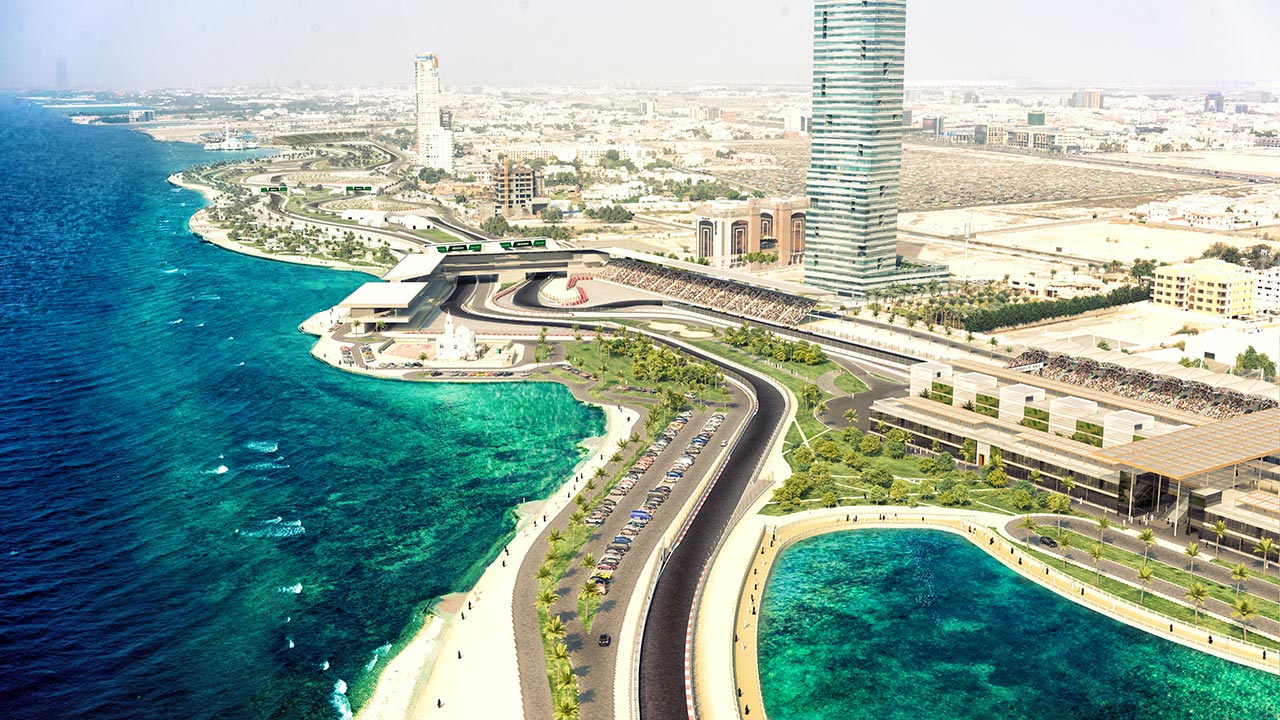 In just 100 days, the new circuit on Jeddah’s idyllic waterfront will wow spectators in both the grandstands and thanks to its stunning floodlights, television viewers around the world.

As the countdown begins to this historic event, we caught up with Carsten Tilke for a more detailed discussion about the spectacular new circuit F1is heading to this December:

How have preparations been for the first-ever F1 Saudi Arabian Grand Prix 2021?

“It has been incredibly busy. Never before have we undertaken a project like this in such a short timeframe. We started last December, and we need to be finished in 100 days and this has included both the planning and construction phases.

“Even though Jeddah will be a street circuit, everything has been built from scratch, including much of the track itself and the buildings, pit garage, royal ‘overlook’ tower and grandstands. The location for the 6.1km circuit is the beautiful corniche, just north of the city center of Jeddah.

“It’s a stunning landscape with the Red Sea on one side and a lagoon on the other, but we’ve had to put in place all the foundations for the buildings, the drainage for the whole area and the track itself. It’s been a huge undertaking and a challenging project, but everything is progressing very well, and I have every confidence everything will be ready on time.”

Can you explain how both F1 and the Saudi Arabian organizers of the race have helped you in creating this new street circuit in Jeddah?

“The story of why this circuit has been fast-tracked into construction is because the Qiddiya venue near Riyadh that was originally slated to host a Grand Prix is a huge undertaking that will take many years to create. The intention was to accelerate Saudi Arabia’s presence on the F1 schedule so F1 made a number of visits to Jeddah to look at sites to create something that would take less time to build.

“We have only been able to achieve what we have done in the timescale because of the amazing work from the local people in Jeddah which includes the promoter and the whole management team at the Ministry of Sports. A project like this can only work if everyone is united. It’s a big undertaking, and it requires a lot of organization to ensure the construction runs smoothly.

“We have the experience of creating a lot of tracks, but this is the first F1 circuit in Saudi Arabia. We have had a good relationship with everyone, both locally and with F1 and the FIA.”

What qualities will this circuit have that will make it different to other F1 tracks?

“We worked closely with the organizers in Saudi Arabia and with F1 to create a circuit that will produce great racing and will be a challenge for the drivers. In addition, it will be spectacular for both the visiting spectators and the TV audience around the world.

“Therefore, we have a very challenging fast section that the drivers will love, a 12-degree banked corner that will help with overtaking and a stadium section surrounded by a number of grandstands. In addition, there will be Drag Reduction System [DRS] zones on the straights to further aid overtaking, while the whole thing is situated in a beautiful location under floodlights. It will look incredible on TV and also from the point of view of the spectators in the grandstands.”

Typically, street circuits are characterized by slow, 90-degree bends, but you have been able to create high-speed corners, how has that been possible?

“The beauty of this location is that we are close to the city and can attract a high number of spectators, but we are not confined to a downtown area which is restrained by the location of buildings. Typically, modern cities are made up of blocks, which when used for a circuit leads to many 90-degree corners one after, another which isn’t particularly exciting for the driver or spectator. 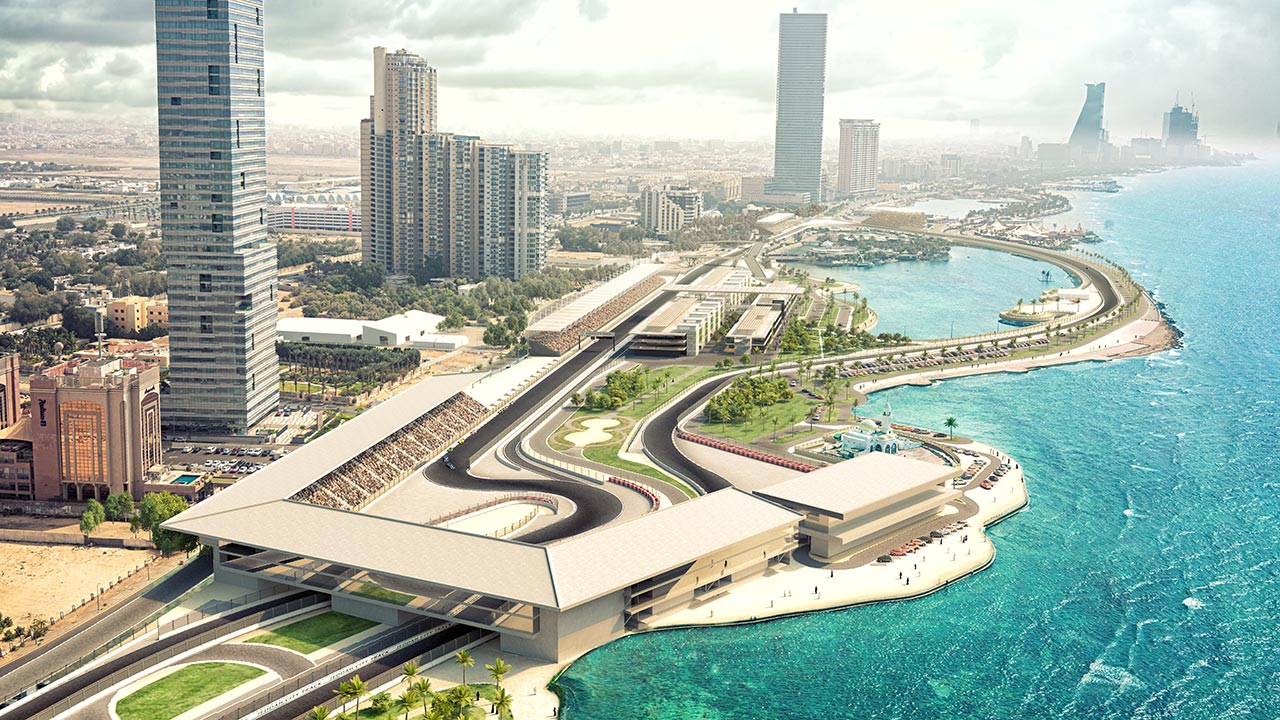 “We don’t have that restriction here as the corniche area north of Jeddah is only just being developed. It means we could create a number of designs in collaboration with F1 which were then run in simulations built by Ross Brawn’s Motorsports team at F1. Using our engineering know-how and their results led to adjustments being made to the layout which were then simulated again to develop a new model. And then of course the FIA needed to consider the safety aspects of the design would lead to further revisions.

“The fast sections we have on the track are only possible if safety is guaranteed, which is closely checked and monitored by the FIA. For me this is why the Jeddah Street Circuit works so well. It’s close to the city, it will draw in the spectators and have the atmosphere of an urban venue, but it has the space so we can increase the speed of the corners which is something you can normally only do at a permanent facility. All of these elements will make this one of the best circuits in the world.”

Looking at an onboard lap from a computer simulation of the track, it looks like drivers will relish the challenge…

“Yes, it will be the fastest street circuit in terms of average speed, estimated to be 252 km/h. And while many of the corners will be at full acceleration, they will still be a challenge for the drivers. I have driven the lap many times on the simulator – right now I’m probably top of the leaderboard in our office with the lap record! – but with the walls close to the edge of the circuit, you really need to concentrate to avoid making a mistake. I find that the character of this track really flows in this landscape and it will be very rewarding for those who can master its 27 corners.”

With 100 days to go what are the biggest challenges that lie ahead?

“Everything is a big challenge. If you visit the site in Jeddah today all you will see is a big construction site. The time schedule is so tight that we cannot make any mistakes, and everything needs to go ahead as planned. It’s a huge logistical exercise, but it’s all going to plan right now.

“What you have to consider is that we can’t build the track and then focus on the buildings, they have to be constructed in unison. But for example, the royal ‘overlook’ tower crosses over the track, so there needs to be co-ordination to finish each stage at the right time.

“You will see from the renderings that the views from the royal tower – as well as the stadium and the grandstands – overlooking the circuit will be incredible. Plus, the whole stadium section will have premium hospitality inside so spectators will be able to see the cars at the start, braking for the first corner sequence, then they’ll drive underneath them on the fast return leg.

“Right now, the foundations have been finished for the pit building and we are focusing on other areas of the track that require completion to the highest quality. Every track we build in every country is different, but we have great partners in Saudi Arabia, and we have a lot of experience by deploying our best people on site to ensure everything runs smoothly. When everything is complete in 100 days from now it will be an amazing spectacle.”