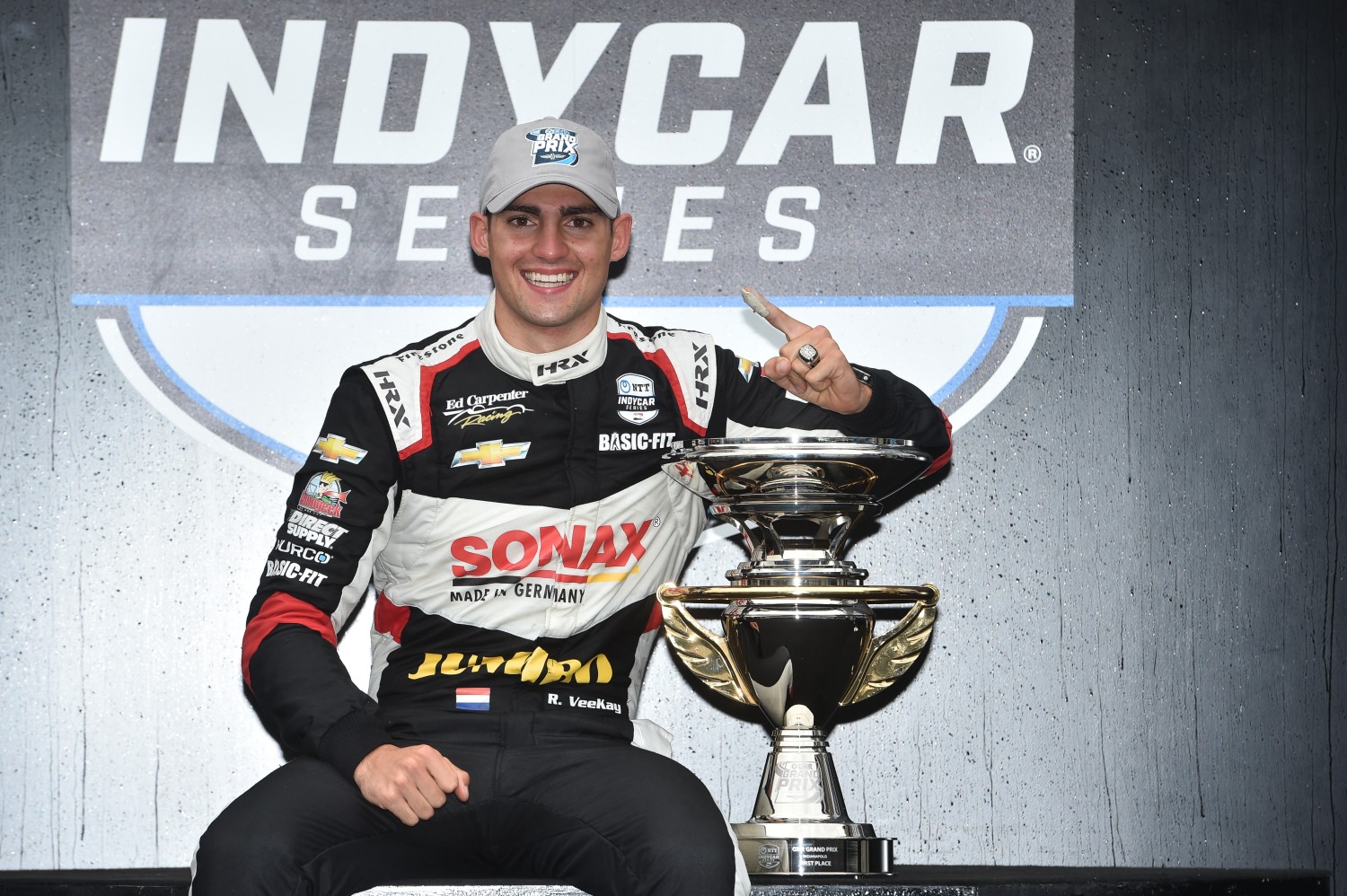 Ed Carpenter Racing announced today that Rinus VeeKay will officially remain with the team for the 2022 NTT INDYCAR SERIES season. The 21-year-old will continue as full-time driver of the No. 21 Chevrolet, a role he will now hold for a third season. When the 2021 season concludes today in the streets of Long Beach, VeeKay’s focus will immediately shift to 2022’s 17-race schedule.

“I am very excited to have another season with Ed Carpenter Racing! We made so much progress this year, I had my first win in IndyCar and made many great memories. Next year, we can be better than we’ve ever been!” stated VeeKay. “We want to be championship contenders, to go for even better results, more frequent wins and podium finishes. The atmosphere at ECR is perfect for that, it feels like a group of friends who are eager to work hard for strong results. I am excited to continue that in 2022 and not having anything change!”

Raised in Hoofddorp, Netherlands, Rinus van Kalmthout began karting in 2009 at the age of 8. With sights set firmly on the pinnacle of North American open wheel racing, he transitioned to the Road to Indy in 2017 and launched his U.S. career driving as Rinus VeeKay. His rapid ascent through the RTI ranks included 16 wins and 36 podiums in 48 races. Those statistics propelled him to second place in the 2017 USF2000 standings, the 2018 Indy Pro 2000 title and a runner-up finish in the 2019 Indy Lights championship. Just four years into his career in the United States, VeeKay not only reached the NTT INDYCAR SERIES, but earned 2020 Rookie of the Year honors.

ECR team owner Ed Carpenter watched VeeKay’s progression through in the Road to Indy and selected the Dutch driver for his team in late 2019. VeeKay has been with ECR ever since and will make his 29th career start this afternoon. “I am very happy that Rinus will be back behind the wheel for ECR in 2022,” said Carpenter. “Rinus has continued to show that he has the talent and work ethic to be a champion and that’s the goal of our team. We look forward to more success next season!”

Though VeeKay is only two years into his NTT INDYCAR SERIES career, he has already built an impressive resume. In addition to his Rookie of the Year title, his debut season included his first pole position and first podium finish. In 2020, he recorded the best qualifying result by a teenager in Indianapolis 500 history by starting 4th; in 2021, he qualified 3rd and became the youngest front row starter in “500” history. In May of this year, VeeKay joined the ranks of NTT INDYCAR SERIES race winners. He earned his first career victory in the GMR Grand Prix at the Indianapolis Motor Speedway road course.

VeeKay is grateful for the support he has received. “I want to thank Ed Carpenter for giving me the opportunity to drive for another season! Ed was the one that gave me the chance to be able to prove myself in IndyCar and I am very grateful to him.”  He continued, “Thank you to Tony George, Stuart Reed and the entire team, every single person who makes this possible. I am the one driving, but there is a whole team behind me working day a night to give me a good, reliable car. I also really appreciate the support of ECR’s partners, including SONAX and Direct Supply, for allowing us to work hard, improve and take a big step forward this offseason.”

A third year with the Indianapolis-based team will make VeeKay the longest-tenured full-time driver in Ed Carpenter Racing’s 10-year history. Since its inception in 2012, ECR has raced exclusively in the NTT INDYCAR SERIES.  The team has shown versatility by earning eight wins on each style of track the series competes on – street and road courses, short ovals and speedways. ECR boasts 36 Top 5s to date, 23 of which have been podium finishes. For nine of their 10 Indianapolis 500s, ECR has had at least one car qualify in the first three rows. An ECR Chevrolet has sat on the front row seven of those years, including three pole positions by Carpenter (2013, 2014 and 2018).