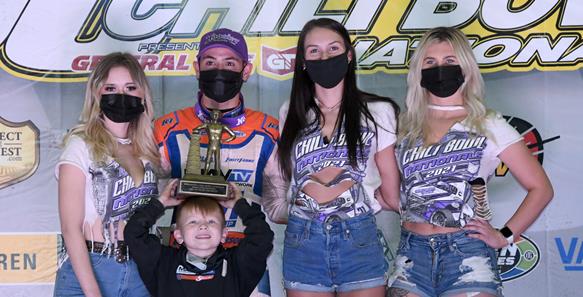 The 2022 Lucas Oil Chili Bowl Nationals presented by General Tire are here. In other words, it’s time for the Super Bowl of midget racing.

Contested annually on the quarter-mile dirt oval known as Tulsa Expo Raceway inside the SageNet Center at Tulsa’s Expo Square in Oklahoma, the Chili Bowl is the hottest auto race in the cold of winter. The event’s prestige has only grown since its inception in 1987.

The 2022 Chili Bowl marks the 36th running of a race that has been dominated by NASCAR national series drivers over the last several years.

If Larson were to win the Chili Bowl in 2022, he would accomplish what fellow NASCAR Cup Series driver Christopher Bell did from 2017-19, when he won three consecutive A-Main events in Tulsa.

Larson and Bell are two of nine NASCAR Cup Series drivers (current or former) who are featured on a record-setting entry list for the 2022 Chili Bowl.

Below is the breakdown of the TV and live streaming schedule for the 2022 Chili Bowl.

Both Larson and Bell, winners of the last five A-Main features in the Chili Bowl, are entered in the 2022 event. They are part of a record-breaking entry list.

Larson and Bell are two of nine NASCAR Cup Series drivers — current or former — included on the 2022 Chili Bowl entry list (more on those later). Chase Elliott, the 2020 Cup Series champion, is among them.

The complete entry list for the 2022 Chili Bowl can be viewed here.

Two drivers — Larson and Bell — have won the last five A-Mains at the Chili Bowl, the week’s feature event.

Swindell’s son Kevin ranks second in Chili Bowl A-Main victories with four (all in a row from 2010-14), though injuries sustained in a 2015 crash ended his driving career.

NASCAR DRIVERS IN THE 2022 CHILI BOWL

A couple former Cup Series drivers in Kasey Kahne and J.J. Yeley are entered in the 2022 Chili Bowl, as well. As is Ryan Newman, who wrapped up what could be his final Cup Series season in 2021.

Also, you have Cody Ware (No. 17D) and Brett Moffitt (No. 45M) joining Elliott in making their Chili Bowl debuts as well.

Briscoe has just one championship feature start; he finished 22nd in 2017. Stenhouse has a pair of top-10 finishes in seven appearances in the A-Main at the Chili Bowl. Both Bowman and Elliott will be looking to reach the championship event for the first time in 2022.

Yeley has three top fives in eight feature races at the Chili Bowl. Kahne has one top 10 in seven such starts. Newman has one E-Main victory (2020) but has never competed in the A-Main feature.

IndyCar Drivers in the 2022 Chili Bowl

Former IndyCar driver, turned NASCAR driver, Santino Ferrucci is entered in the #16. Last year, he, Conor Daly and James Davison went south for the indoor Midget event and had a lot of fun but did not run well.

Also, Conor Daly will drive the #47D for DIAEDGE Racing.

No other IndyCar drivers are entered.  They must be afraid of embarrassing themselves, or prefer to stay home and eat Bom Boms.