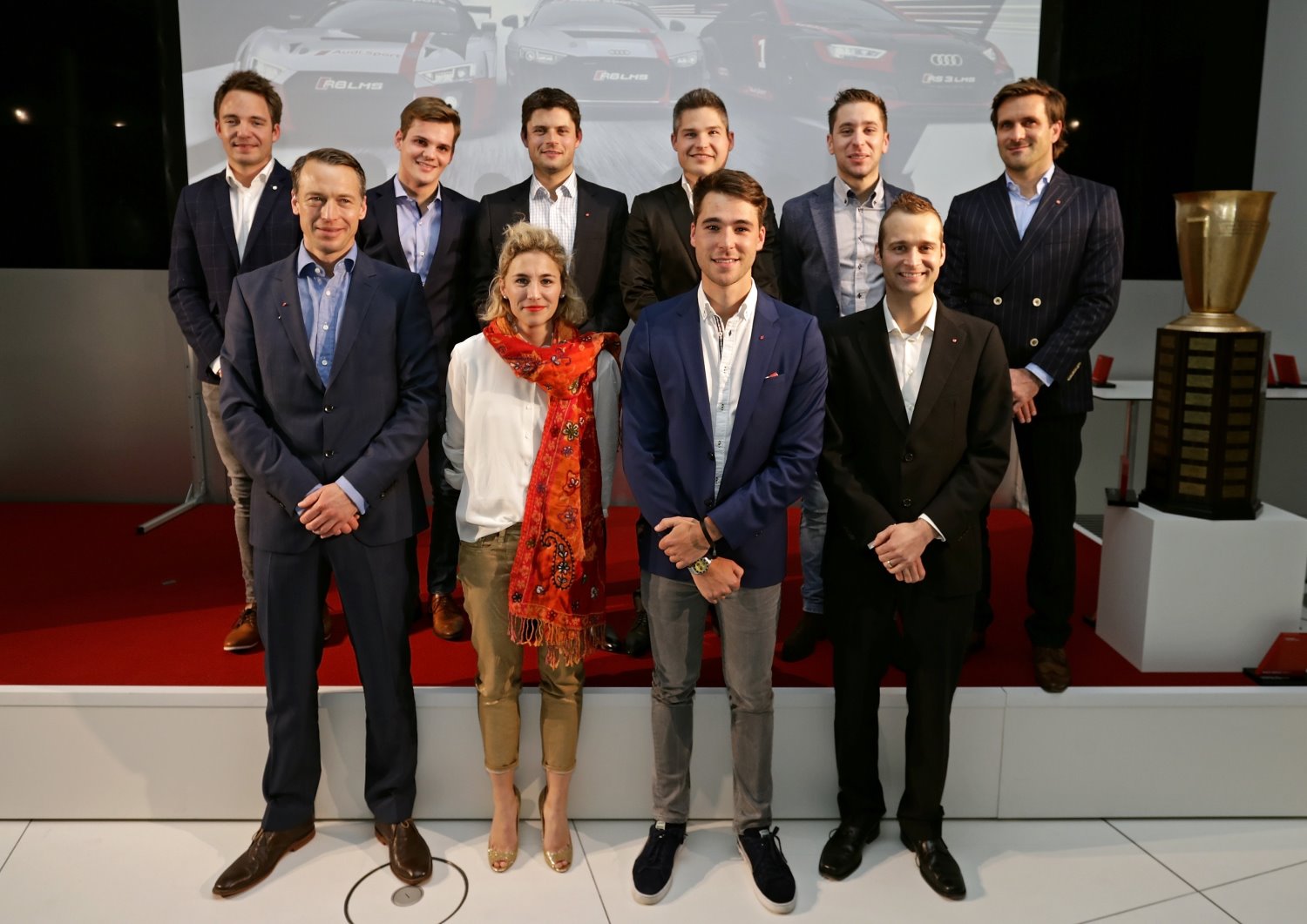 Dries Vanthoor and Frederic Vervisch join driver lineup: In terms of its driver squad, Audi Sport in 2018 will again rely on Rahel Frey (CH), Robin Frijns (NL), Christopher Haase (D), Pierre Kaffer (D), Kelvin van der Linde (ZA), Christopher Mies (D), Frank Stippler (D) and Markus Winkelhock (D). They will be joined by two new race drivers from Belgium. Dries Vanthoor, who is only 19 years old, has been racing for Belgian Audi Club Team WRT for two years and this season clinched GT race victories in Hungary, China, at the NÃ¼rburgring, in the Le Mans 24 Hours and at other events. His 31-year-old Belgian compatriot Frederic Vervisch gathered several years of experience in single-seaters, was 2007 runner-up in the ATS Formula 3 Cup and since 2015 has been active in the Audi R8 LMS in various GT series. Additionally, in the season that just ended, he contested the TCR International Series in the Audi RS 3 LMS. All campaigners are going to compete in various programs worldwide for the brand’s customers.

Initial programs for 2018 confirmed: Audi Sport customer racing in 2018 will again tackle the Intercontinental GT Challenge. Next year, the only global GT racing series will encompass one round each in Australia, Belgium, Japan and the United States. Having clinched drivers’ and manufacturers’ titles in 2016 and 2017, Audi has been unbeaten in this young racing series to date. Audi Sport customer racing also supports teams in the 24-hour races at the NÃ¼rburgring and at Spa.

Three one-make cups under the banner of the four rings: In the 2018 season, race drivers relying on Audi will have the opportunity to confirm their skills in three different one-make cups for the first time. The Audi R8 LMS Cup will be held for the seventh year. In 2018, the Cup will feature a new format permitting only privateer drivers. Besides the GT3 version, the GT4 version of the race car will be seen at rounds in Australia, Germany, China and Malaysia for the first time. The Audi Sport ABT TT Cup will continue the one-make cup commitment for up-and-coming drivers under private direction. New will be the Audi Sport Seyffarth R8 LMS Cup that offers an attractive entry-level platform for GT4 racing in Germany.

A present for Wolfgang Land: Chris Reinke, Head of Audi Sport customer racing, and Dirk Spohr, Head of Customer Management, surprised Wolfgang Land with a pre-Christmas gift. They presented the team principal of Land-Motorsport who won the NÃ¼rburgring 24 Hours for the first time this year with a copy of the winner’s trophy. The original of the challenge cup is on display at Audi Sport customer racing but now Wolfgang Land’s collection of trophies includes a memento of his so far greatest victory on the Nordschleife as well.

Admission ticket for life: Racing organizer SRO (Stephane Ratel Organization) in cooperation with Audi Sport customer racing surprised Audi’s longtime head of sport Dr. Wolfgang Ullrich with a lifelong ticket for the 24-hour race at Spa. On behalf of SRO, Anthony Comas, who is responsible for Marketing and Business Development, presented the retired head of sport with the ticket on the occasion of the Audi Sport customer racing Race Night. Dr. Wolfgang Ullrich has not missed a single edition of the iconic endurance race for many years.

A unique farewell gift: Stephan Winkelmann received a one-of-a-kind gift on being farewelled. Chris Reinke, Head of Audi Sport customer racing, on behalf of all motorsport members of his organization, presented the outgoing CEO of Audi Sport GmbH with a full-face racing helmet sporting a Signature design.

Customer sport annual: Anyone who would like to delve into the world of Audi Sport customer racing can look back on the season once more in an annual. On 208 large-size, 23.5 times 33 centimeter, pages, the volume is dedicated to racing series and single events in America, Asia, Australia and Europe. Fans of the Audi R8 LMS Cup and the Audi Sport TT Cup will get their money’s worth as well. The annual created in collaboration with Audi Sport customer racing is available on the internet at www.adrenalin-verlag.com