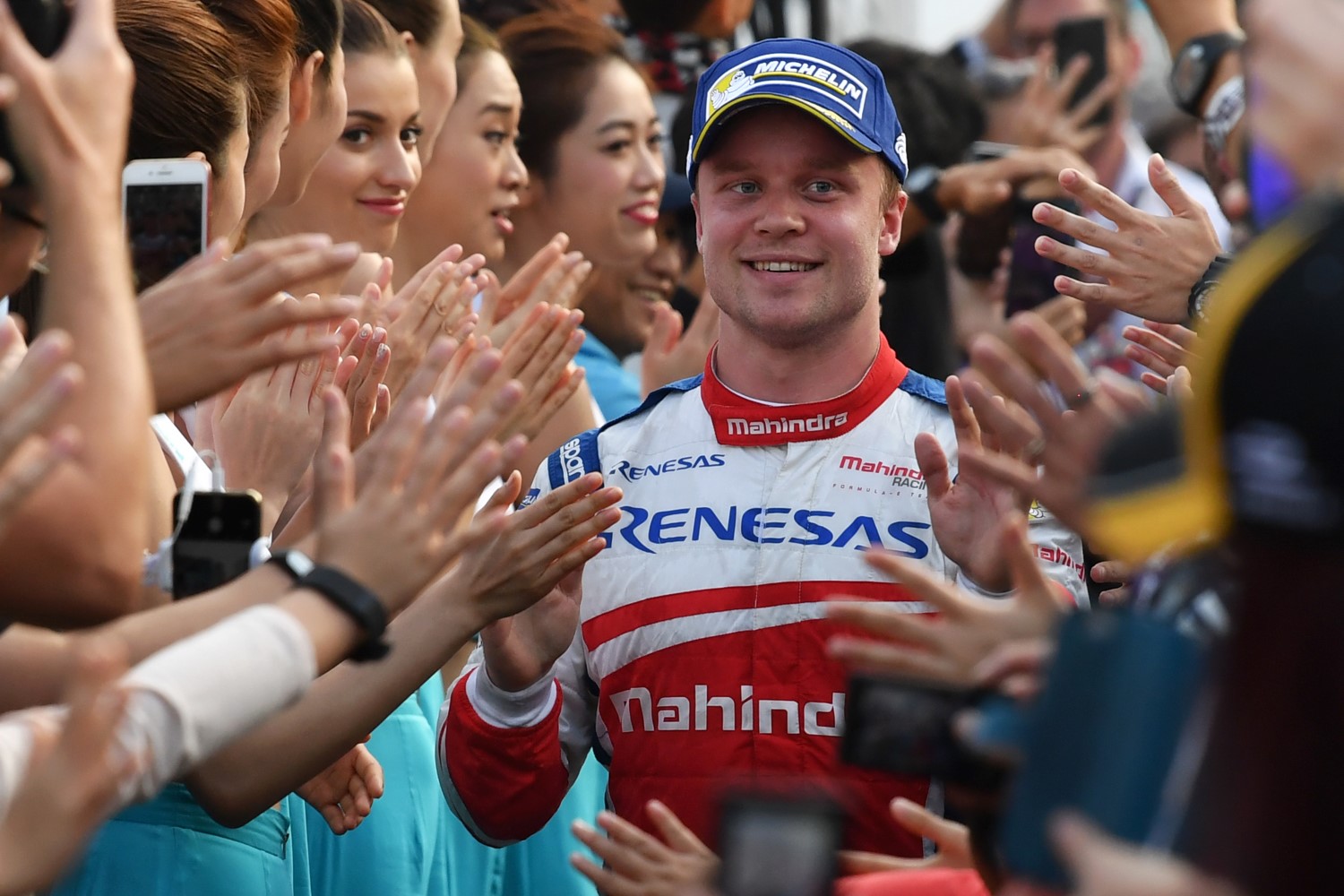 Felix Rosenqvist was elevated to first place in Hong Kong and earned his second victory in the FIA Formula E Championship, after Daniel Abt was disqualified for a technical infringement.

The Audi Sport ABT Schaeffler driver was denied his first-ever win in Formula E on his 25th birthday following a post-race penalty, which found that the FIA security stickers (barcodes) on the inverter and MGU units didn’t correspond with those declared on the technical passport provided by the competitor for the event.
The result remains provisional subject to an appeal to the FIA International Court of Appeal by Audi Sport ABT Schaeffler, against the stewards’ decision to disqualify Abt from the race.
Abt pumped his fist as he crossed the finish-line, only to be stripped of victory hours later. The German chased debutant Edoardo Mortara for the majority of the race and inherited the lead with just two laps to go after the Venturi driver spun at Turn 2.
[adinserter name="GOOGLE AD"]Street circuit specialist Mortara put on an impressive display in only his second-ever E-Prix, but made a mistake pushing too hard to obtain the extra point for Visa Fastest Lap. He quickly recovered after pirouetting into the run-off area and re-joined to finish in a disappointing third – later promoted to second.
Rosenqvist led the field from the start behind the Qualcomm Safety Car as a hardware issue caused the start-lights not to come on. However, the Mahindra Racing driver didn’t utilize his advantage of avoiding a standing start and carried too much speed into the first corner, spinning in the process with the entire field facing him.
Unable to get back on the racing line with a stampede of cars approaching, Rosenqvist had to wait patiently for an opportunity to safely join the queue. The Swede slowly made his way back through the field and benefited from the movers and shakers ahead of him to claim the maximum points on offer – with the additional points for Julius Baer pole position and Visa fastest lap.

Despite not being able to stand on the top step – Rosenqvist will take it as it comes, as will Mitch Evans who made history with a first podium finish in Formula E for Panasonic Jaguar Racing and a return to the podium for Jaguar in motorsport for the first time in 15 years.

A statement from the team stressed that "the parts are identical and all fully correspond to homologation".

"What we are apparently suspected of is an administrative mistake in the car's passport that didn't give us any advantage at all.

"We want the opportunity to be able to clarify all details, that's why we've announced the intent to appeal."

A call on whether to go ahead with the appeal will be made in the coming days, and if Audi decides to do so then the matter will be put forward to the FIA's International Tribunal.

QUOTES
Felix Rosenqvist, Mahindra Racing, said: “There’s been a lot of ups-and-downs all weekend, but I’m happy with taking away 29 points – for pole, winning the race and fastest lap – it’s a lot of points! But I feel sorry for Daniel as well, he won the race on track, but I don’t know the reason. It’s not the way you want to win and I don’t feel like I’ve won the race. But I’m happy with the points. Sometimes you’re happy and then you’re sad, like yesterday we were in P15 and turned it around – getting fastest lap but it got taken away, so there’s been a lot like that but I’ll take maximum points and third in the championship."
Edoardo Mortara, Venturi Formula E, said: “It’s difficult to find the words actually after a race like that. It’s tough to swallow. We had the pace and managed the race from the beginning to the end. I was checking my energy consumption and the gap to Daniel the entire race and I guess at some point I wanted too much. Sometimes you need to admit it – you were too confident and I should’ve focused on bringing home the win. We showed the others today we had the pace, and I’ll improve myself at the next races."
Mitch Evans, Panasonic Jaguar Racing, said: “I’m proud to secure Panasonic Jaguar Racing’s first podium in Formula E. It’s bittersweet as Daniel is a good guy and a mate of mine. After a tough year in our first season, this is a great reward for the hard work of everyone in the team. Tonight we will celebrate this achievement together and then work hard to repeat it."
Revised Results
Original Report
—————————————————–

Round Two of the HKT Hong Kong E-Prix got underway behind the Safety Car, after the starting lights failed, and ended in drama as Venturi Formula E driver Edoardo Mortara choked and handed victory to Audi Sport Abt Schaeffler's Daniel Abt on his 25th Birthday.

After working so hard in Qualifying to start the race on pole, Turn One proved to be a challenge for Mahindra Racing's Felix Rosenqvist who spun on the corner, putting him back to 11th place while giving Venturi Formula E's rookie driver Edoardo Mortara an easy lead.

Abt consequently moved up to second, while front-row starter Edoardo Mortara inherited the lead, and gradually pulled clear of the Audi driver across the rest of the stint.

Mortara, in his first season with Venturi, maintained a three-second buffer after the pitstop phase but erred under braking for Turn 2 on lap 43 of the 45-lap encounter and spun.

Shortly after, more trouble for Mahindra as Rosenqvist's teammate Nick Heidfeld stopped on track due to a technical failure, dropping him to the back of the grid.

Nio Formula E Team driver Luca Filippi took an early pitstop, rejoining at the back of the grid and eventually climbing to finish in 14th.

[adinserter name="GOOGLE AD"]Back at the front, Mortara defended his position, managing his energy well, to lead the race for 23 laps before pitting and switching to his second car, rejoining the race without losing his position.

With the standings looking set, all was about to change as Mortara headed into Turn One, just moments from the end of the race.

Pushing hard to secure the Visa Fastest Lap, Mortara locked up and spun. Facing the other direction, he watched as Daniel Abt take the lead.

With only two laps to complete, the birthday boy sailed to victory, followed by poleman Felix Rosenqvist and Mortara in third.

An emotional Mortara simply said, "I wanted too much," after he pushed too hard in a bid to clinch the Visa Fastest Lap.

Jaguar's Mitch Evans took fourth position, having lost out to Rosenqvist through the pitstop sequence, while Jean-Eric Vergne claimed fifth for Techeetah.

DS Virgin's Sam Bird started from 13th after incurring a 10-place grid penalty for his error in the pits en route to victory in Saturday's season-opener.

Bird gradually made progress to record sixth position, profiting from team-mate Alex Lynn, who ran fifth, slowing on the run to the flag.

Oliver Turvey was seventh, as Maro Engel, Nicolas Prost and the aforementioned Lynn completed the top 10.

Perennial title contenders Sebastien Buemi and Lucas di Grassi suffered another dismal race, with Buemi only 11th, having started from the back, while di Grassi took 15th, after stopping on track due to a battery issue.