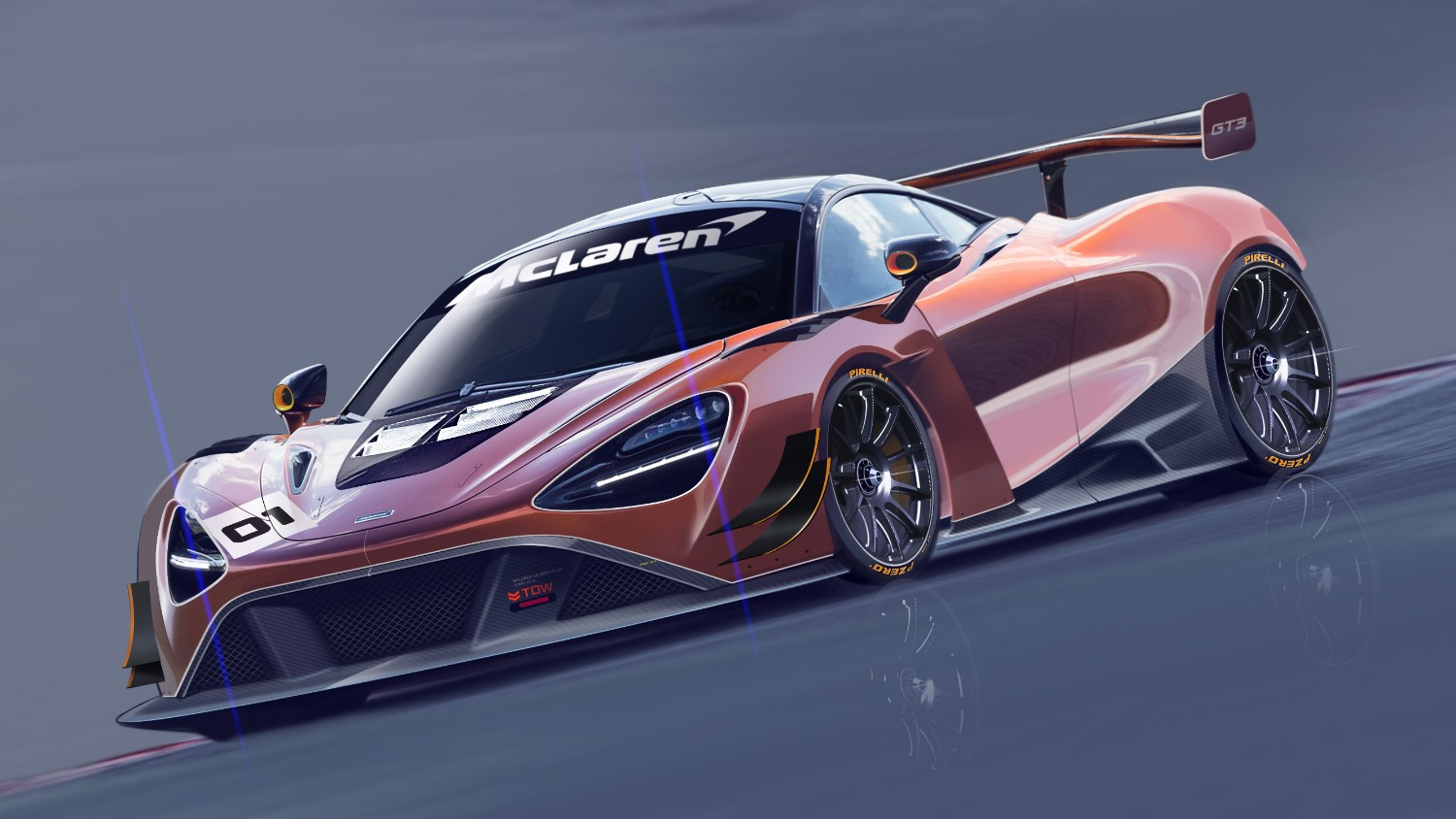 McLaren Automotive, the British creator of luxury sports cars and supercars, is to expand its race-winning activities in GT racing with a number of new initiatives. Headlining these is the announcement that a new 720S GT3 race car will join the successful 570S GT4, and this new model will begin testing next year for launch with customer teams in 2019.

To serve customers engaging with the sport in the best possible way, McLaren Automotive is appointing a network of specialist motorsport retailers who will retail road and track products alongside each other. Also from next year, owners will be able to compete in a one-make GT series. Finally, the company will be helping to nurture young motorsport talent with the launch of a Driver Development Program.

The actions are all designed to bring McLaren’s customers even closer to the action than ever before – crucial for a brand born on the race-track, as McLaren Automotive CEO, Mike Flewitt, explained: “McLaren is built on racing and providing our growing family of customers with unique and exhilarating driving experiences. It therefore makes sense for us to unveil a dedicated, widened motorsport program designed to support and enable more of our customers to focus on enjoying the thrill of pushing our cars on the track. The 720S GT3 will provide a stunning race-going addition to our Super Series product family and drivers will now be able to hone their skills under expert guidance backed-up by our technicians at the circuit and our motorsport retailers away from it."

[adinserter name="GOOGLE AD"]As the first element in the refreshed program, and building on the recent successes with both the 12C GT3 and 650S GT3 cars, McLaren Automotive is to develop and build a GT3 race car based on the award-winning McLaren 720S. Two concept sketches have now been released.

The 720S GT3 will benefit from race and championship-winning experience and knowledge accrued by McLaren during six seasons of motorsport activities. Following an intensive development program in the 2018 season, the 720S GT3 will make its competitive debut with customer teams in the 2019 season and will be fully compliant with GT3 regulations and eligible to compete in all GT3 race series globally.

The MonoCage II carbon fiber structure at the heart of the 720S road car provides the foundation for a mid-engined, rear-wheel-drive car set to appeal to professional and budding drivers alike. A race-prepared version of McLaren’s 4.0-litre, twin-turbocharged V8 M840T engine will provide the power source, through a six-speed, sequential shift motorsport transmission. The aerodynamically-optimized bodywork of the 720S GT3 will be formed from both composite and lightweight carbon fiber, with a bespoke aerodynamic package. The suspension will comprise tried and tested adjustable dampers and coil-over springs, front and rear.

The 720S GT3 race car follows on from the 650S GT3 which has proved itself as a race winner and world-beater on the highest GT stages globally following its launch in 2014. It has scored titles on all four continents on which it has campaigned, including the Asian Le Mans Series, Australian GT championship, the Bathurst 12 Hour, Blancpain Endurance Cup and Pirelli World Challenge. This was a development from the original 12C GT3 which was launched in 2010. After an intense development program throughout the 2011 season, the 12C GT3 debuted with customer teams a year later, winning 19 races, a further 19 podiums and pole position for the legendary Spa 24h race.

To support a further part of the expansion plans for customer racing and track activities across the globe, McLaren Automotive has also confirmed the first details of retailers approved to retail the brand’s motorsport products. Appointed from the existing McLaren retailer network, initially 10 retailers will offer motorsport support and service with the first such retailer to be announced being McLaren Glasgow, the recipient of the brand’s retailer of the year award. Alongside Glasgow in Europe will be Zurich; North America will be represented by Dallas, Newport Beach, Philadelphia, San Francisco, Scottsdale and Toronto, while the Asia-Pacific region will have representation in both Melbourne and the spiritual home of McLaren, New Zealand, with the Auckland retailer.

“Motorsport retailers represent an important milestone for McLaren Automotive – strengthening a core part of the business, and bringing the world of road and track models even closer together," said Jolyon Nash, Executive Director, Global Sales and Marketing, McLaren Automotive. “Motorsport has been, and will continue to be, a core value to the McLaren brand which truly was born on the track, and this runs through the DNA of each and every product that we hand assemble."

The company has also unveiled plans to extend its existing popular Pure McLaren customer track day series by creating the Pure McLaren-GT race series that will race in 2018 at iconic European racing circuits. The new series is aimed at McLaren owners who already have extensive track driving experience and are looking to take their first steps in the racing world in a controlled and familiar environment with the support of McLaren motorsport experts that allows customers to tap into over five decades of racing know-how.

Open exclusively to individual McLaren owners with the minimum of an International D grade license, they will be able to take advantage of a full ‘arrive and drive’ package with all cars maintained and run by McLaren engineers and technicians, freeing owners up to concentrate on their driving. More details, including venues and dates for the new Pure McLaren-GT series, will be announced in due course.

McLaren is as committed as ever to developing future racing talent. Alongside new cars will be a driver development program designed to nurture a new generation of GT racers. To kick-start the McLaren Automotive Driver Development Program, four promising British drivers have been selected from an existing stable of driving talent connected with McLaren who will compete in pairs driving two 570S GT4 cars during 2018.

The Program will identify talent and create a breeding ground for future McLaren Factory Drivers by providing them with motorsport education and driver support. That support includes being assigned a professional mentor from McLaren’s team of drivers, fitness and nutrition assessments and advice and PR, marketing and sponsorship support and guidance.

Drivers will be regularly assessed and evaluated on their performance with a tailored program developed to ensure each delivers their best performance every time they compete. This will include simulator access and working with the engineering teams to better understand telemetry data and race strategy.

Jordan Albert (21), Charlie Fagg (18), Michael O’Brien (22) and Lewis Proctor (21) will each have a driver coach from the roster of Pure McLaren driver coaches and share a driver mentor in Rob Bell who joins McLaren as Factory Driver.

In 2018, a competition will be launched for drivers to participate in a 2019 International Driver Development Program run by McLaren Automotive. More details will be announced next year.

“The McLaren Automotive Driver Development Program has been established to help gifted young drivers realize their motorsport ambitions: if they have the talent, regardless of their background, we want to be there to guide them and foster their racing skills. These drivers will be our future in endurance racing and in the four we have selected this year, we believe that with McLaren’s support all of them are potential GT championship winners. I am also delighted that Rob Bell joins the team as a Factory Driver for the 2018 season, as his knowledge and experience will be of enormous benefit to the Driver Development Program. More than this, he will ensure that the 720S GT3 car builds on the success of our previous models in this class and is capable of competing against – and beating – the best that the GT world has to offer," added McLaren Automotive CEO, Mike Flewitt.

Only in its seventh year, McLaren Automotive now forms the largest part of the newly combined sports and technology-based McLaren Group and has a workforce of around 2,100.

After a successful spell in BRDC F4, winning multiple races, 21-year-old Jordan Albert moved into GT4 competition in the British GT Championship in 2016. In a highly successful debut year, Albert took a class win in only his second race, and took a further podium later in his partial-season campaign. Despite missing the final two rounds, BRDC Rising Star Albert still finished seventh in the class championship.

Charlie Fagg is an up-and-coming teenage British racer, who graduated from the Ginetta Junior ranks in 2016, after multiple podium finishes over three years of competition.

Since then, 18-year-old Fagg has enjoyed a highly successful debut season in the category and is a BRDC Rising Star. In the GT4 European Series Northern Cup he amassed multiple race wins, as well as an impressive pair of GT4 class wins in dominant fashion, on his debut British GT Championship weekend at Spa-Francorchamps.

Twenty-two-year-old Briton Michael O’Brien is still relatively new to motorsport, but in just four years of competition has racing a variety of machinery. O’Brien, who began racing in the Historic Formula Ford back in 2014, quickly climbed into the British Formula Ford Championship after multiple wins during his debut season.

Twenty-one-year-old Lewis Proctor broke onto the McLaren scene this year after competing nationally in saloon championships, the young Brit campaigning a McLaren 570S GT4 in the GTA class of the GT Cup championship in the UK. He, along with his brother Steward finished P9 in the championship standings.

38-year-old Rob Bell, who has been driving McLarens as a Factory Driver since 2012, is one of the most accomplished GT drivers of his generation. Bell has won multiple championships with the Woking-based brand, in multiple categories and series, including the 2016 Blancpain Endurance Cup title, as well as the Asian Le Mans Series GT championship in the same year. More recently, this season he also won the International GT Open Pro/Am title.