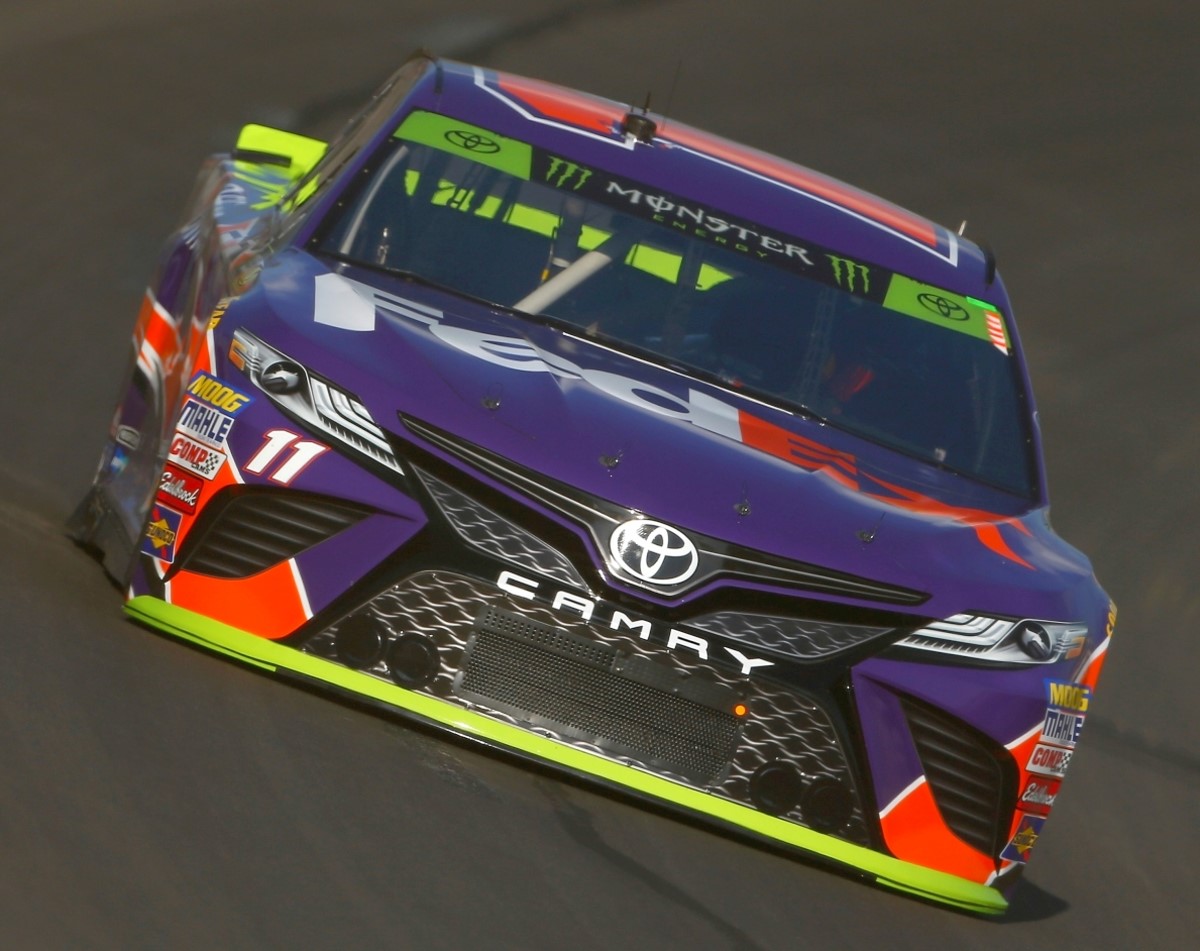 Denny Hamlin’s No. 11 was the final car to take the track during Coors Light Pole qualifying at Homestead-Miami Speedway – and it was also the fastest.

Hamlin propelled his Joe Gibbs Racing Toyota at 173.980 mph to take the top starting position from playoffs driver Martin Truex Jr., who secured the second spot with a fast lap of 173.952 mph in his No. 78 Furniture Row Racing Toyota for Sunday’s Ford EcoBoost 400 season finale.

Truex Jr. and Kyle Busch finished 1-2, respectively, in the opening rounds of qualifying.

Barely missing the second round of qualifying was Danica Patrick (25th), who announced Friday that this year will be her final season as a full-time driver in NASCAR. Patrick will run the 2018 Daytona 500 and IndyCar’s Indianapolis 500.

Dale Earnhardt Jr., who will be making his final full-time start in the Monster Energy Series on Sunday, will start the Ford EcoBoost 400 from the rear after the team changed the engine in his No. 88 Chevrolet following a sputtering incident in opening practice. Earnhardt Jr. and the team made the second round of qualifying, but elected not to run past the first round in order to preserve tires for the race.

The Monster Energy Series is back on track at Miami on Saturday for practice at 10 a.m. ET (CNBC).

How do you feel about your qualifying lap?

“We had them there by a little bit, I messed up three and four a little bit. Honestly, it was a great run and we did great adjustments there. Our FedEx Camry was obviously very fast that last run. I love this race track and wish we would have our chance, but that will be another day, another year for us."

Do you feel you helped your teammate by knocking Martin Truex Jr. off the pole?

“I really don’t care, I want to win and that’s all I care about."

How was the car in practice?

“We had a good practice today. We came here and tested and our FedEx Camry was very fast in the test. We knew that we were going to have a chance as soon as it became nighttime. The track came to us a little bit and we had just enough."

How do you feel about your qualifying effort?

“It was a good day overall, that was a bit dramatic. We missed it a little bit that last round and lost more grip than I anticipated. We made some adjustments and knew it was going to go that way, but just not far enough. I can’t say enough about this group, just a really strong day – five one-thousandths away from it being a perfect day. Just proud of everyone and they did what they needed to do today and we’ll get to work tomorrow."

How has the car felt today through practice?

“So far I’ve been really happy with the feel in the car and the balance has been really close every run. I don’t see it being a lot different tomorrow. We had a really good test here and thought we learned a ton that will help us. Hopefully we’ll pick up where we left off and make some fine adjustments and get comfortable and ready to race on Sunday."

Were you disappointed to just miss the pole for Sunday’s race?

“I don’t know, I think we definitely wanted to be first to get that first pit stall, bit aside from that, we’re all up front, we’re all close to each other and this is a track you can pass on. Just in general I was proud of my team for having a good, solid day. We had a shot there and just missed it a little bit there in round three. Good, solid effort and that’s what we needed to do today and we’ll get to work and see what we can do on Sunday."

Where do you think you might have given up a little bit to miss the pole?

“Definitely touched the apron there in (turn) one. I tried to get in there and get to the bottom quicker so I could get the gas quicker and I just touched the apron a little bit and it kind of shot me off the bottom some so gave up some over there and then tried to make it back up in three and four and kind of overdid three and four. But, still not a bad lap. Definitely was pole worthy though so I hate it that we weren’t able to get the number one pit stall. I felt like that was a great opportunity. I felt like when (Martin) Truex (Jr.) ran the .043 that there was a shot out there for a 90-something. That’s kind of what I was shooting for. I was trying to find that 90 and being able to be number one."

How would you access your weekend so far after today’s practice and qualifying?

“Pretty good. I think we’re farther ahead than where we were in 2015 when we won the whole thing. We weren’t as good in practice than we were today in ’15 and we qualified third so we tied that so we’ll race them out and see what happens here."

What are you feeling from the track?

“Not much difference from last year honestly. I felt like it was pretty close. The lack of downforce on these cars makes it seem worse and makes tire fall off seem worse because it’s not the amount of pressure, not the amount of everything being able to put down the car into the race track and get the load that you need and save the tire. We’re sliding around more so that’s going to hurt the tire more. Overall, though, I feel really good about our M&M’s Caramel Camry. Adam (Stevens, crew chief) and the boys have done a phenomenal job. I just want to thank everybody at Joe Gibbs Racing, Toyota, TRD, M&M’s, Interstate Batteries and we’ll go get them. We’ll go get them tomorrow in practice and then we’ll get a good race car going for Sunday."

Are you concerned at all that you will have to conserve tires on Sunday?

“Yeah I think so. I think there’s going to be some different strategies and varying opportunities because I feel like with the stages we know there’s going to be caution flags flying in those particular moments and we don’t need stage points so we can try to see what we need to get with however things fall."