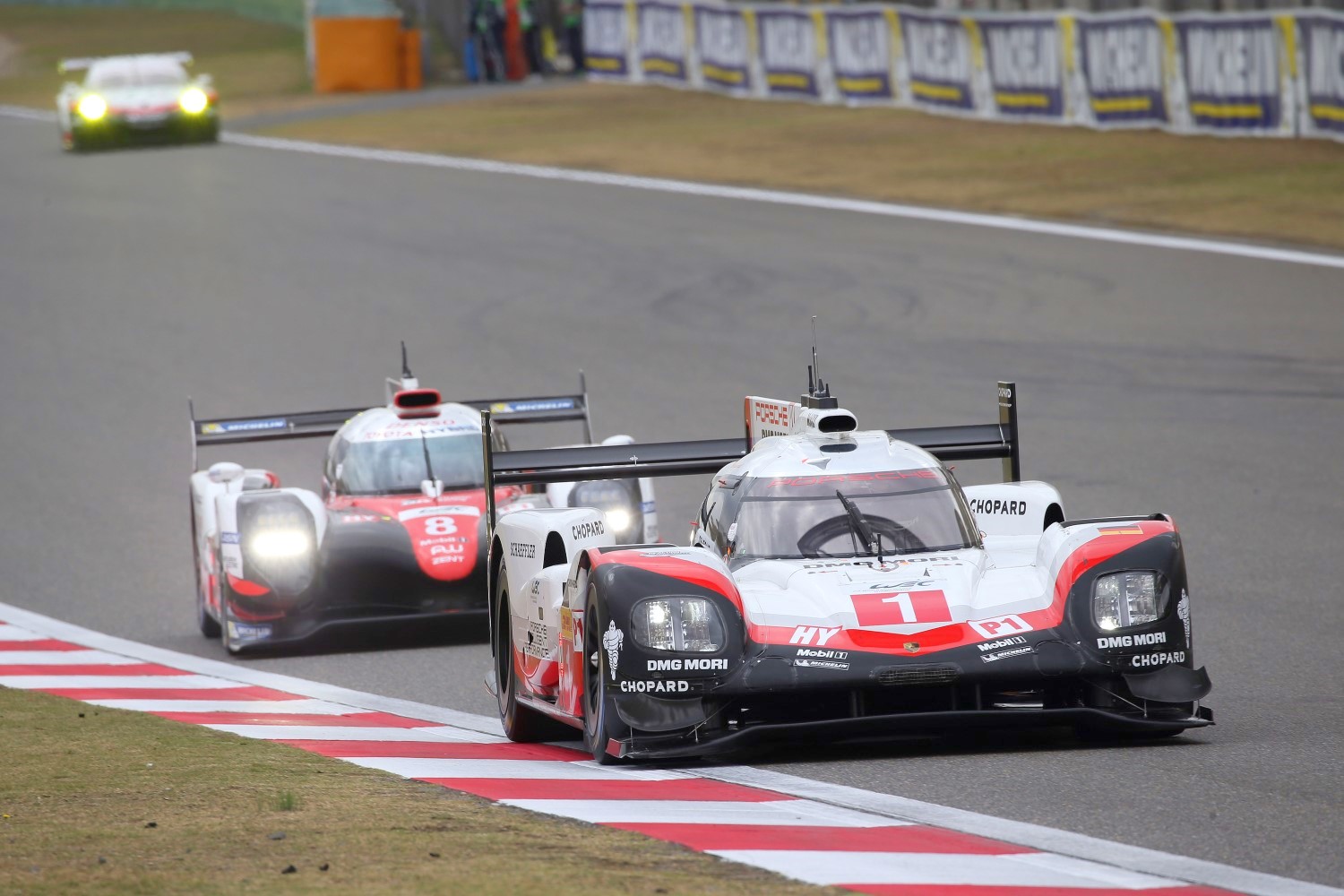 The No. 8 Toyota TS050 Hybrid of Sebastien Buemi took the win by one lap ahead of Bernhard, who inherited the Manufacturers’ Championship-clinching runner-up position following a late-race crash from the lead by Lopez.

The Argentinean overshot the entry into Turn 2, slamming into the No. 91 Porsche 911 RSR and damaging the left-rear suspension and driveshaft. It cost Toyota a sure-fire 1-2 finish.

Lopez, who also spun in the opening hour after contact with a LMP2 car, finished seven laps behind in fourth after a trip to the garage for repairs from the final hour accident.

[adinserter name="GOOGLE AD"]A ten-second post-race time penalty was added to the No. 7 Toyota for Lopez’s collision.

Up front, it marked Buemi and co-drivers Anthony Davidson and Kazuki Nakajima’s fourth win of the season and second straight after taking top honors in last month’s rain-shortened Six Hours of Fuji.

The No. 1 Porsche of Andre Lotterer, Nick Tandy and Neel Jani finished third, despite a throttle issue that saw Tandy nearly stop on track in the opening hour and drop more than 80 seconds behind.

Both Porsches struggled to match the pace of the Toyotas all race, with the No. 2 car falling a lap down by the fourth hour.

Vaillante Rebellion claimed its third class win in the last four races, taking over the LMP2 championship lead as a result of a turbulent race for Jackie Chan DC Racing.

Bruno Senna pedaled the No. 13 Oreca 07 Gibson to a 35.280-second margin over the No. 36 Signatech Alpine A470 Gibson of Nico Lapierre in second, following drama for the No. 38 DC Racing entry, which faded to fourth in the end.

Two costly spins for Ho-Pin Tung, both triggered by other cars that later received penalties, as well as a fuel-only stop in the final 30 minutes, took the Chinese squad out of contention in the race.

The sister No. 13 Rebellion entry completed the class podium on Sunday, thanks to a late charge by Nelson Piquet Jr.

Sebastien Buemi (TS050 HYBRID #8): “It’s an amazing result for our car. We had a great fight with the sister car and it’s just unfortunate we couldn’t bring home a one-two. It’s been a great job from the team to strike back from some difficult races with back-to-back wins. Hopefully we can fight for a fifth win in Bahrain and have more wins than Porsche this season. For now let’s celebrate the win and enjoy the last fight in Bahrain."

Anthony Davidson (TS050 HYBRID #8): “It’s great to get a win again after actually driving the car, unlike in Fuji! I can properly celebrate this one. The car was great. We struggled a bit compared to #7 in qualifying but we had the best car in the race. I want to say thanks to our car crew because we had the right strategy and strong pit stops. That gave us the platform to win today."

Kazuki Nakajima (TS050 HYBRID #8): “Many thanks to the team for giving us such a good car and well to the pit stop crew. My team-mates did a great job but I suffered a lot in the car, with the traffic and all the rubber on track. I lost a bit of time but managed to survive and we had the speed to win by a lap. I am happy with the race result and now the target is to win again in Bahrain."