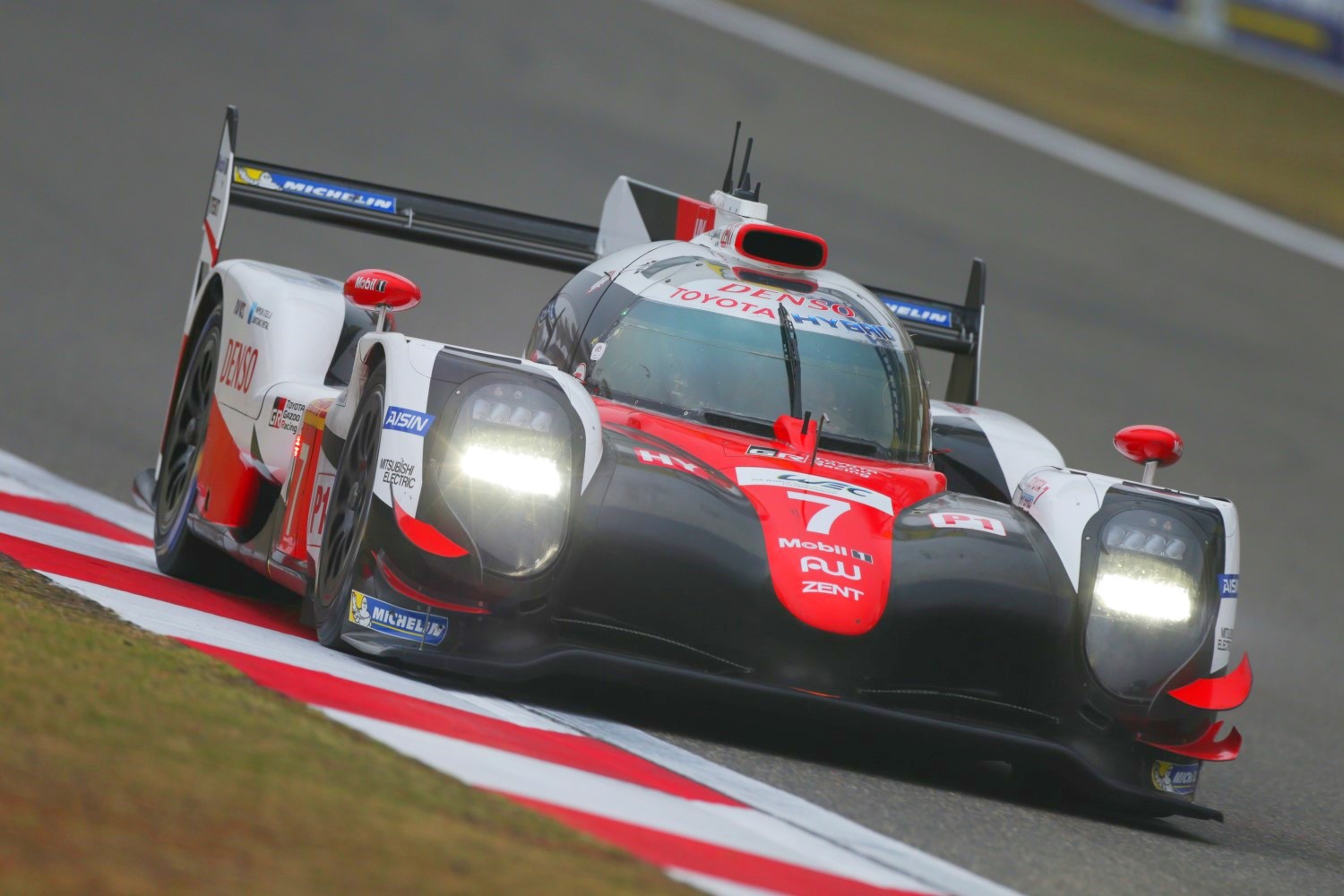 Toyota took pole position for the 6 Hours of Shanghai in qualifying for the penultimate round of the FIA World Endurance Championship (WEC) in China today.

The #7 TS050 HYBRID of Mike Conway, Kamui Kobayashi and Jose Maria Lopez had been fastest in all three practice sessions and kept up the pace in qualifying, earning their fourth pole of the season by 0.440secs.

After a difficult qualifying session the two Porsche 919 Hybrids will start from positions two and four on the grid.

[adinserter name="GOOGLE AD"]Championship leaders Earl Bamber (NZ), Timo Bernhard (DE) and Brendon Hartley (NZ) had to be satisfied with qualifying fourth. At the end of the 20-minute qualifying session, a puncture prevented Bamber from a further attempt to improve.

Saturday saw Shanghai in bright sunshine with an ambient temperature of around 16 degrees Celsius. Race day is also expected to be dry. The six-hour race will start at 11:00 hrs local time (04:00 hrs in Central Europe)

LMP2 pole went to Bruno Senna and Julien Canal in the Rebellion ORECA-Gibson 07.

That put them a whopping two seconds up on the G-Drive ORECA qualified by Nico Muller and Leo Roussel.

The second Rebellion car driven by Nelson Piquet Jr and David Heinemeier Hansson was third, while the championship-leading Jackie Chan DC Racing ORECA ended up fourth in the hands of Oliver Jarvis and Thomas Laurent.

The two Ganassi Ford GTs ended up in a disappointing fourth and fifth position.

“Qualifying didn't quite go to plan," said Dave Pericak, global director, Ford Performance. “I thought we had a better run in us. The Ferrari got in front of the #67 when it was on fresh tires, which didn’t help but it’s going to be a long race tomorrow. We have strong cars and we’ll be ready for the race."

“That was a disappointing session for us as I came across a Ferrari parked in the middle of the first corner on my flying lap," Priaulx said. “That took the peak out of my lap so I managed a reasonable time but obviously not a pole position time. Harry then went out and did a great job to get us up to fourth place, which really saved us. We’ve got a lot of work to do tomorrow but as always we’ll give it everything we’ve got.

The focus for the #66 Ford GT during the practice sessions was to work towards the perfect set up for the race. Fifth place in qualifying sets Mucke and Pla up for an assault on the podium tomorrow.

“We have been concentrating on race strategy so we only used one set of tires and did the minimum number of laps in qualifying," Mucke said. “I’m sure we could have sneaked out a quicker time but our focus is on the race as tire drop off is a significant factor here. We need to be on the best rubber to maximize our potential and we should also remember that anything can happen at the start of this race."

“Our long race simulation runs have been strong so we’re looking forward to the race," said WEC Team Principal, George Howard-Chappell. “It’s interesting that some of the cars ahead of us chose to use two sets of tires in qualifying, which may have an effect in the race."

Pedro Lamy and Paul Dalla Lana took a sixth pole of the year aboard their Aston Martin in GTE AM.

Mike Conway (Toyota TS050 #7): “We have topped every session so far this weekend so I’m really happy. My lap was okay but I felt I could have been a little quicker because there was a lot of grip. I was expecting Kamui to go quicker and he did. It’s a great start; hopefully we can stay at the front through the race."

Kamui Kobayashi (Toyota TS050 #7): “I’m really pleased even if the lap itself wasn’t perfect. I didn’t try new tires before qualifying so it was tricky to adjust. But overall the car was really good and I was 100% confident in it. We have been strong all week; the team has done a great job so far."

Andre Lotterer (Porsche 919 #1): “To start second on the grid is good for tomorrow’s race. Initially we wanted to fight for pole position, but the Toyota was really strong. Nick did a good lap before I jumped into the car. My first lap was deleted because of track limits. On my second attempt I had less traffic and could improve, despite the tires not being in ideal conditions anymore."

Nick Tandy (Porsche 919 #1): “It is obviously good to be on the front row and have a clear look at turn one at the start. We don’t like the fact that we are behind one Toyota but the good thing is we are in front of the other. It is clear that it will be a big fight and a tough race between the four LMP1-H cars. We look forward to it and congratulations to Toyota for today."