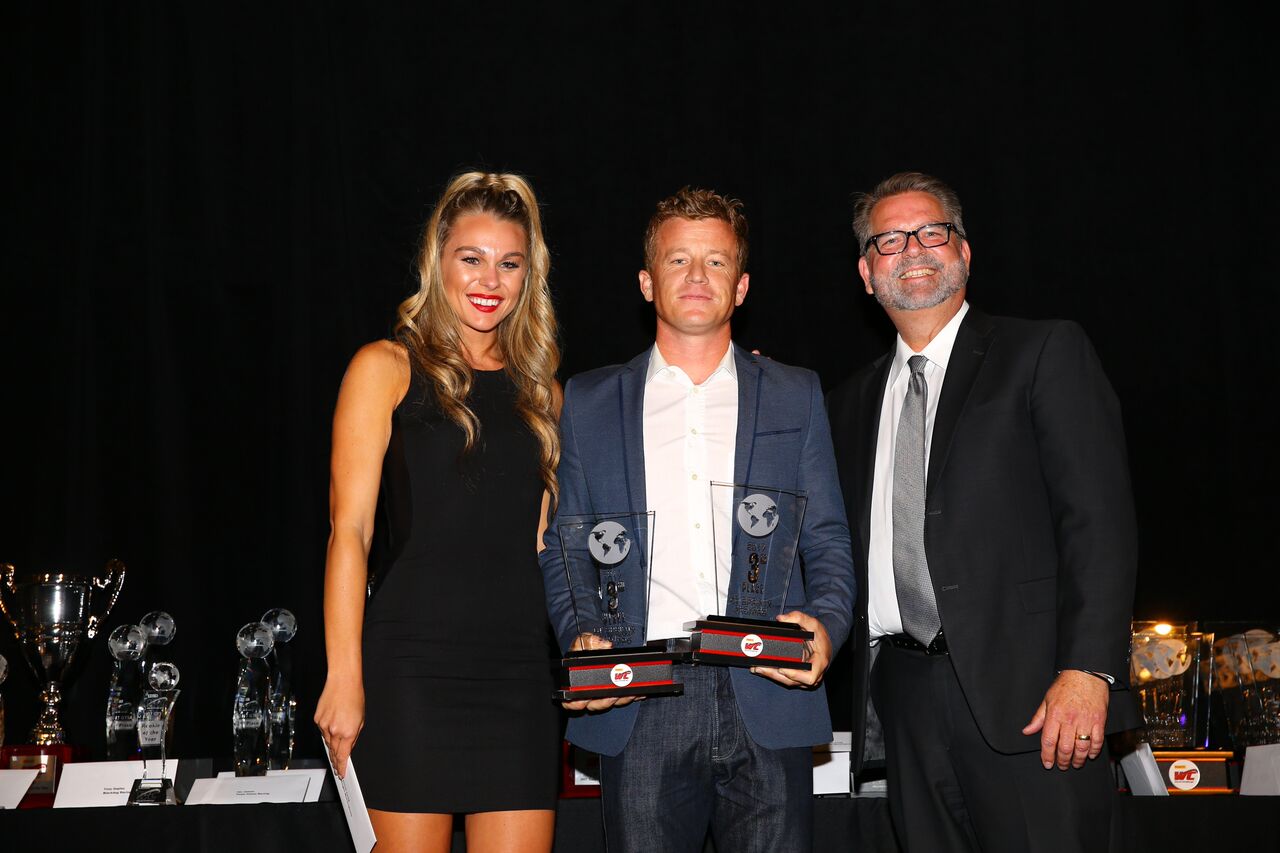 ROHNERT PARK, Calif. — Patrick Long and his Wright Motorsports team (GT) as well as Lawson Aschenbach and his Blackdog Speed Shop squad (GTS) were the big recipients and led the festivities Sunday night in the 2017 Pirelli World Challenge Season-End Awards presentation at The Doubletree in Rohnert Park, Calif.

In addition, the duo of Michael Cooper and Jordan Taylor as well as James Sofronas, George Kurtz and Yuki Harata were honored as class champions before a large crowd in the Doubletree ballroom which concluded the racing doubleheader weekend — PWC Grand Prix of Sonoma — at the famed Sonoma Raceway. The GT/GTA/GT Cup, SprintX and GTS champions were awarded last Sunday evening in a gala hosted by TV commentators Greg Creamer and Jeff Lepper.

Next month (Oct. 14), the Touring Car divisions — TC, TCA and TCB — will be feted after their season-ending weekend at Mazda Raceway Laguna Seca.

“The 2017 Pirelli World Challenge tour again saw some of the best sports car competition in the world," said Greg Gill, president/CEO of WC Vision, producers of Pirelli World Challenge. “With the expansion of the SprintX format, we had top drivers from around the world coming to PWC to battle for the coveted titles as well as our traditional Sprint events. And the new GT4 class machinery continued to show that the GTS category holds a bright future. We want to thank all of our drivers, teams, sponsors and fans for their participation that made 2017 such a great year with Pirelli World Challenge. We are looking forward to the 2018 campaign already."

Long, the 35-year-old veteran from Manhattan Beach, Calif., captured the Overall GT point championship as well as the GT Sprint title in the potent No. 58 Wright Motorsports Porsche 911 GT3 R sports car with impressive consistency throughout all 19 GT Sprint and GT SprintX events.

With four wins, six runner-ups and three third-places, Long posted 365 points overall to better Cooper (338), with three 2017 victories including two at Sonoma, and 2016 GT champion Alvaro Parente (315), with four wins. In the GT Sprint division Long was stellar with podium finishes in eight of nine races and a point total of 202 to Parente’s 175 and Cooper’s 163.

“Saturday’s event was a different race for me, trying to close out the overall championship with one round remaining so I could run Sunday with gloves off," said Long. “I'm very proud to close out the Sprint Championship and the team championship Sunday. For the fans, with multiple championships, it was important to capitalize on trying to secure as many championships as possible to leave a stamp on 2017 after quite an eventful 2016. My second championship has been a bit of a long wait but certainly it's much sweeter because the PWC championship has a ton of factory teams and drivers in it. It really is evolving and it's a proud moment for me to race against some of these guys that have huge CVs and respect internationally in sportscars."

In the GT SprintX category, Cooper, the 28-year-old from Syosset, N.Y., and Taylor, the 27-year-old Orlando, Fla., teamed up to take Cadillac Racing to another PWC series title in the bright blue No. 8 Cadillac Racing Cadillac ATS-V.R. with consistent runs and one victory at Canadian Tire Motorsport Park. Cooper and Taylor topped the Mercedes pair of Ryan Dalziel and Daniel Morad in the No. 2 CRP Racing/DeVilbiss Mercedes-AMG GT3, 175-172. Third in SprintX went to Long at 163.

“Luckily, Jordan and I didn't have to make too many compromises together this year," said Cooper. “We're both pretty easy going and work well with each other. So, there was no fighting over who gets what in the car and we were also both pretty comfortable with similar setups on the car. The beauty of the SprintX championship was the guys that you beat — the factory drivers that have been around for so long and have competed and won in so many different championships. To be able to beat those guys is a nice badge of honor. As far as teaming up with Jordan (Taylor), he's a pretty plug-and-play kind of guy that can get it done on any given weekend."

“This is my first GT championship to go along with my Grand-Am Prototype type championship," Taylor said. "It was under tough circumstances at COTA, thankfully we built up enough points where it didn't matter. Michael and I, I think, drove very well together all year. We liked a similar set-up in the car and in this type of racing synergy that wins championships. We may have not had the fastest car, but the team's great preparation and the consistent results accomplished by no mistakes and failures makes it a great season. We are happy to win it for everyone at Cadillac."

“It was definitely a great year," said Sofronas. “I've been fortunate to be surrounded by an amazing team this year and we've been running 5 cars, 24 in our crew, and, somehow, I managed to put it together with a great staff. When I get in the car, that's my break from everything – I can just race – but it wouldn't have happened without a great crew. After I finished this weekend, I realized we ran every single lap of every single race this year. We didn't miss one single lap; no mechanical, no DNF, no contact that caused us to fall off. That's a testament to the prep level and these guys have a lot going on. I chuckle looking back at my first World Challenge start, I borrowed a U-haul van and an old trailer and ran down at Road America in an Oldsmobile Achieva and finished 9th back in 1994. and I knew that this is what I wanted to do and I've basically stayed in it a long time."

GMG Racing’s Neville Agass was awarded the prestigious Zimmerman Award, an annual award presented in the memory of multi-time Championship-winning crew chief Jerome Zimmermann (1967-2003) at season’s end to the crew chief that best exemplifies the similar passion, dedication and success Zimmermann had in the Pirelli World Challenge.

Aschenbach, the 33-year-old veteran from Palm Beach Gardens, Fla., was a master of consistency like Long in 2017 with his No. 10 Blackdog Speed Shop Chevrolet Camaro GT4.R machine with 12 podium finishes (top-three) including two wins, seven seconds and three thirds. It was Lawson’s third GTS title.

Aschenbach also was the recipient of the coveted Jim Cook Memorial Trophy, an annual award honoring the memory of James Edwin Cook (1939-1985) that is presented at season’s end to an entrant/driver who has made significant contributions to the overall success of the Pirelli World Challenge Championships through promotional activities and a consistent display of good character and sportsmanship.

“Anytime you get into a season, the first thing you think about is race wins," said Aschenbach. “As a driver, we want to win races and forget about the championship until the end of the year and hope that it works itself out, so this entire season was about winning races. It was frustrating since we were always running second or third. You can look at it as a bad thing or you can also look at it as the Chevrolet Camaro GT4.R is really strong at a variety of tracks. I'm really pleased with the season and to be able to wrap up Manufacturers’ championship is a huge feat. I would give up Drivers or Team championships to win the Manufacturers’ championship for Chevrolet because that's what's more important to us. So, I'm really happy with the season."

Kurtz, the cybersecurity entrepreneur from Arizona, competed in his first full PWC season this year with nine GTS Am wins in the No. 04 CrowdStrike/GMG McLaren 570S to capture the GTS Am class championship. George collected a stellar 360 points to second-place Tony Gaples (319) and third place Mark Klenin (314).

“I really have to give credit to the GMG boys," said Kurtz. “They consistently develop the car. It's a little bit finicky so we kept chipping away at each race. We just kept getting better and better and persistence pays off. Chris, Dave and Hector have done a great job the whole season with me and they know the car and they've done a great job."

Crews of the Year: