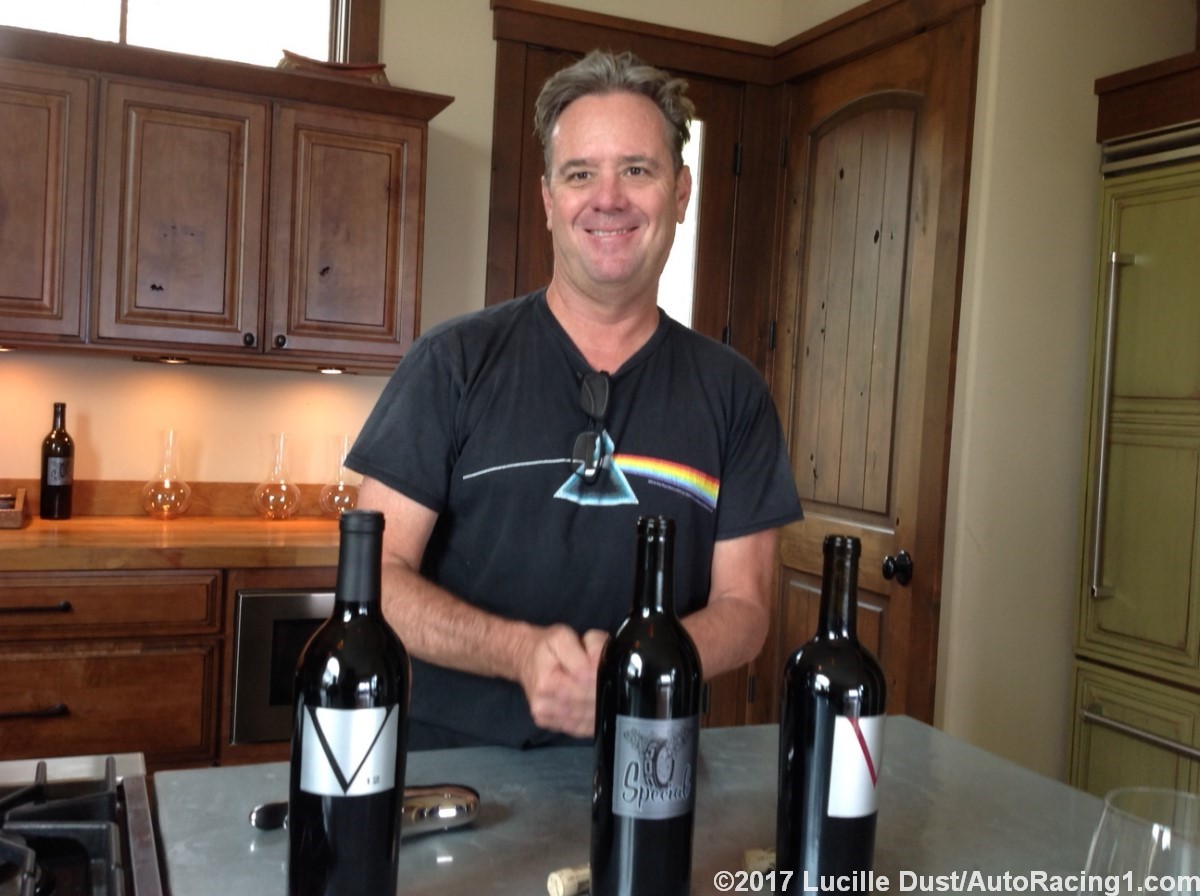 We are out in the beautiful hills of Napa Valley and Sonoma for the championship deciding final race for IndyCar series. Nearly 90 percent of American wines come out of California, four percent of which can claim roots in the fertile hills of Napa Valley. There are several hundred wineries in this area just an hour outside of San Francisco. AR1.com visited the V12 Winery in Napa and was quite surprised to see the owner, Jimmy Vasser, on property.

Vasser is a former accomplished IndyCar driver who won the 1996 Indy 500 and the Championship that year. During his IndyCar career, he drove for Chip Ganassi Racing, Patrick Racing, Team Rahal, American Spirit and for the team he co-owned with Kevin Kalkhoven and Dan Pettit, PKV Racing.

Vasser went on to become just a team owner, hanging up his driving shoes in 2006. The KV Racing team, co-owned with Kevin Kalkhoven, closed their doors early this year after a 14 year run in the IndyCar series.

[adinserter name="GOOGLE AD"]So the retired driver was hanging out at his winery when I arrived this morning. Expecting to meet his sister Vicki, who runs the day to day operations in the tasting room, I was pleased to see Vasser uncork some of his special wines for me to taste. I asked how he got into the wine business and he explained that he was a consumer. He then explained the real reason.

"I had two car dealerships in Napa and I wanted to get a place in Napa even though I still live in Las Vegas. So I bought this ranch in 2001. Then in 2005 I decided that I should grow grapes in wine country and see if it would be good wine. Then it was like having a pet alligator that only ate $1000 bills."

"After I bought the property, I had to dynamite the rock before planting the vines. The land here is all rock. I have 45 acres and 8 acres are planted with vines. It was over $100,000 an acre just to plant the vines. There are three wells on the property that I use to irrigate the vines. When it was hot last week, we dumped a lot of water to keep the vineyard from getting burnt. We keep the pesticides down to a minimum as we try to be as close to organic as we can without compromising the wine."

"Because we are above the fog line and the hot temperatures, the red wine grapes grow better here."

"I learned the wine business with every check I wrote. I would ask why am I writing this check, what is this for? The business is a lot more complex than I thought. A lot of science. I learned that you want to make the vine struggle. The more it struggles, the smaller, more concentrated the berries are. And that is what makes a good wine. In the San Joaquin Valley, the berries are big and fat but they don't make the best wine."

Vasser stated that he makes money on his wine. The cost of the glass bottle, cork and the labels are included in his study of cost for a bottle of his wine, which averages about $50. He used the services of two winemakers in the beginning to see what they would do with the grapes because he was so new to the business.

A crew of 50 of will come in to harvest the grapes in a few weeks, depending on the sugar content. Most of the process of making the wine is by hand. The grapes are picked early in the morning, around 4 am, when the temperatures are cooler and are processed and put right in the fermentation tanks in a cool warehouse, never over 60 degrees. The harvest produces about three tons per acre and that produces about 12,000 bottles for the year.

The wines are very good red wines. The V12 labels on the bottles are metal and the Special 500 label was designed by Troy Lee. Top quality wine from a former IndyCar driver. I preferred the Malbec and the Chardonnay. Although the Chardonnay grapes are not grown on Vasser's ranch.

I asked what his plan was for the 2018 IndyCar season. Vasser replied, "It is the first time in almost 30 years I have not gone to all the IndyCar races. We have tried to stay involved with sponsors for Seb (Sebastian Bourdais). Sully, one of his former team partners, James Sullivan, will be here this weekend. We have some people we have to take care of. We will be entertaining some new potential sponsors. Try to put something together to get back into the championship. We are polishing up the sponsors for Dale Coyne Racing."

I asked Vasser if he misses being a driver. "I can't pass the drug test anymore", Vasser joked. 'Of course I miss it. It was tough at first. I quit a little early, when I turned 40 I stopped. I had three podiums out of my last four races. You are thinking you can still do it. There were only 18 cars in the series and I wanted Oriol Servia to get a chance."

Vasser also commented that he looks so young for his age because he never got married. 'I was open to marriage but I did not want to be married while I was driving. I did not want to have a family at that time. Racing was such a fast paced life for me. We are on the road and traveling. I did not bring girlfriends to the track and worry . I have to go to the track and she is worried that she does not have enough makeup on. And I have to be in the car. And then they get pissed off. And then 15 years went by like that."

A special thanks for Jimmy for hosting us. We look forward to seeing you in the pits in next season as he continues his success as a business man.