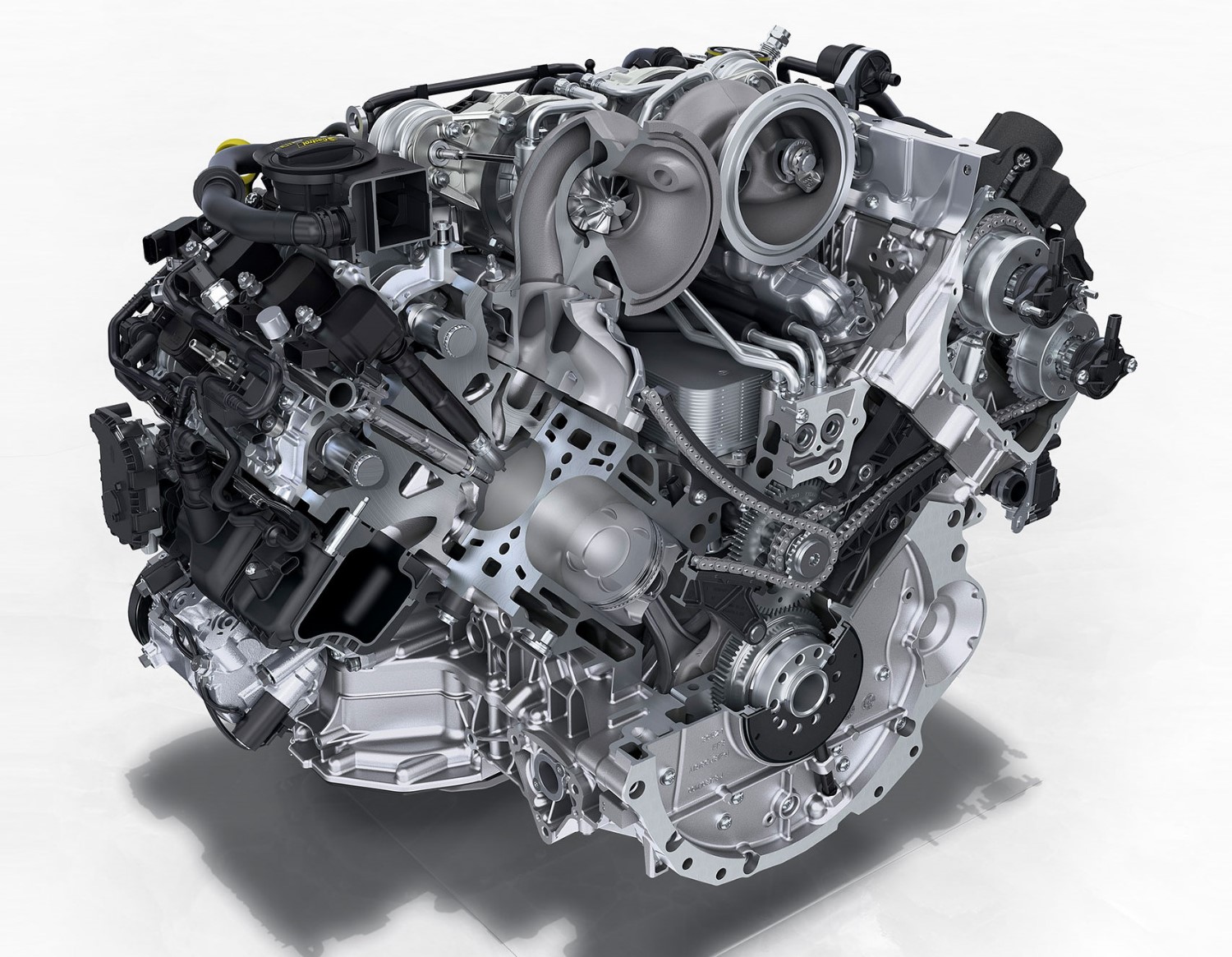 Luxury sedans and sports cars, SUVs and pickup trucks–in each of these vehicle categories, the eight-cylinder combustion engine in the V configuration enjoys an outstanding reputation. Depending on the use, it embodies either luxury and comfort or sportiness and emotion. The reason for the popularity of the V8 compared to other engine configurations is its fundamental advantages. The V8 is only slightly longer than an inline four-cylinder engine with the same cylinder spacing.

The slight increase in required structural length is due to the offset of the two cylinder banks. So the V8 is also a promising option for hybrid drivetrains with an additional electric motor on the crankshaft flange, as the Porsche 918 Spyder demonstrates.

The distribution of the total displacement among many cylinders results in uniform torque output and thus smooth running. So in a four-stroke V8, there are four power strokes per crank-shaft revolution. Larger numbers of cylinders offer smoother running and therefore greater comfort, but their greater structural length and higher weight are drawbacks in terms of the vehicle’s architecture and the axle-load distribution.

[adinserter name="GOOGLE AD"]In sports cars, for example, this can be compensated for through a midengine configuration or, in the case of front engines, by resolutely shifting the ten- or twelve-cylinder engine towards the center of the vehicle. For drivers and passengers, however, this results in space constraints–which is not a viable route for luxury sedans.

Here, the structural length of the engine is completely incorporated into the longitudinal geometry of the vehicle, which with a V12, for example, results in a longer wheelbase or overhang and thus disadvantages in terms of vehicle agility. Special designs such as the W12 compensate for this disadvantage of the classic V12, albeit with a higher degree of technical complexity.

The basics of V engines

Conventional V engines have a special characteristic: The two piston rods of the respective opposing cylinder pair connect to a shared crank pin of the crankshaft. The bank angle of the V is immaterial, because even with some engines with horizontal, opposing cylinders, two connecting rods connect to a shared crank pin. Engines such as that of the Porsche 917 are therefore grouped not with the at engines but with the V engines–albeit with a 180Â° bank angle. With the at engine characteristic of the Porsche 911, by contrast, the connecting rods of the opposing cylinder pairs run to separate crank pins offset from each other by 180Â°. For this reason, the at engine in modern architecture has more main crankshaft bearings than a comparable V engine. The usual number of main bearings today is:

This in turn results in a further difference in the offset of the two cylinder banks: in a V engine, the bank offset is determined by the width of the connecting rod, while in a at engine it amounts to half the distance between cylinders.

The bank angle of a V engine influences the engine height and width as well as the position of the center of gravity in the vertical axis. Ideally, in a V engine it is selected so as to produce an even ignition interval. For a four-stroke V8 engine, that means: 720-degree cycle angle, i.e. two crankshaft revolutions for a complete working cycle, divided by the number of cylinders (8) yield a 90Â° bank angle or a whole-number multiple thereof.

Derivative with a trick up its sleeve: V6 engine

The usable construction space, or when vehicle platforms are offered with V engines with different numbers of cylinders, can necessitate deviations from this rule. One example of this is the V6 engine: to achieve a regular firing order, this four-stroke, six-cylinder engine requires a bank angle of 120Â°, which is associated with an unfavorably large structural width. Moreover, in most cases the mounting space for a V8 variant with a 90Â° bank angle is predetermined. The V6 is then also implemented with a 90Â° bank angle. To compensate for the resulting irregular firing order, engineers fall back on a trick of sorts: the “incorrect" bank angle is compensated for through an additional crankpin offset on the crankshaft. This requires split-pin crankshafts or even flying arms (see figures to the right of page 50) with an angle offset making up the difference. For a V6 with a bank angle of 90Â°, the requisite angle offset is then 30Â° Design of the crankshaft

In the basic design of a V8 engine, designers have another important bit of room for maneuver: the configuration of the crank throws on the crankshaft. This has a crucial influence on the principal characteristics of the engine–whether sporty/aggressive or with comfort-focused smoothness and low vibrations.

The decision regarding the arrangement of the crank throws is shaped by the dichotomy between maximum power potential and optimal balancing of the free inertia forces and torques. Due to the kinematic coupling in the crankshaft drive, the inertial forces are produced by the oscillating motion of the piston and connecting rod masses. Depending on whether these inertial forces are produced one or two times per crankshaft revolution–for example through the upward or downward motion of the piston–we speak of primary and secondary forces in relation to the engine speed. If for the free inertial forces there is also a moment arm with respect to the engine center, this produces free inertia torques.

As the engine speed rises, free inertial forces and/or torques are felt in the form of increased vibration, which, particularly as primary and secondary forces, are perceived as unpleasant and can only be partially mitigated through the engine mounts. For the most part, conventional V8 engines feature one of two crank variants: the “ at-plane" crankshaft in which all crank pins are on a single plane, and the “cross- plane" crankshaft, in which the crank pins of the four cylinder pairs are arranged at 90Â° angles to each other. One typical feature of the cross-plane V8 engine is the characteristic sound, defined by the emotional sound often referred to as “burbling." What sounds pleasant for enthusiasts, however, impacts the gas exchange in the engine. However, an efficient gas cycle is a fundamental prerequisite for the optimal utilization of the displacement in terms of cylinder charge and volumetric efficiency and therefore the potential output. The gas cycle can be impeded by two effects:

In gasoline-powered engines, residual gas also promotes a tendency toward hard, explosive combustion after ignition–i.e. knocking. Persistent knocking leads inexorably to piston damage. In order to prevent this under any circumstances, a knock control system has to intervene–but then the ignition cannot take place at the thermodynamically optimal time, which in turn leads to compromised thermal efficiency. â€¨

A V8 engine with a cross-plane crankshaft experiences this problem in a particularly pronounced form. In spite of the generally even ring order in the engine as a whole, with a 90Â° bank angle there is still an uneven ring order in each cylinder bank. Two cylinders per bank always fire in direct succession (90Â° ignition interval). What that means in concrete terms is that the exhaust pressure pulse of the subsequent cylinder already occurs while the exhaust valves of the previously ignited cylinder are still open. As a result, exhaust is pushed back into these cylinders, which in turn adversely affects the quality of the gas cycle.

In practice, heretofore this disadvantage could only be countervailed through greater complexity: for example, through accordingly great lengths of the individual exhaust manifold pipes–although here the limits are generally defined by the vehicle package–or through cross-bank exhaust manifolds for V engines in which the exhaust side is in the V angle. As part of a current V8 engine project, Porsche Engineering has now broken new ground in this context. With specific control times for each individual cylinder, the residual gas problem can be eliminated with minimal effort. This was demonstrated in impressive fashion both in the simulation and on the engine test bench.

The cross-plane V8 engine typically earns high marks in two other important categories: smoothness and low vibrations. In terms of free inertial forces and torques, the cross-plane configuration is ideal. While there is a remaining primary free inertial torque, this can be relatively easily counteracted through balancing masses on the outer counterweights of the crankshaft. The result is perfect balance.

Differing ring orders depending on the manufacturer

While the firing order determines the crankshaft rotation angle traveled between the ignition of two cylinders, the firing order defines the unique sequence of the cylinders in succession. As fixed geometric variables, the bank and crank angles only allow certain orders. The respective configuration defines which pistons reach their top dead center. The firing orders of flat- and cross-plane engines therefore differ in principle. Nearly all modern flat-plane V8 engines fire in identical sequences; in cross-plane V8 engines, by contrast, one generally finds manufacturer-specific firing orders. This takes into account a circumstance that can lead to slight confusion: worldwide there are different definitions as to which cylinder is counted first and how the other combustion chambers are numbered. This would seem to result in different firing orders. Removing the effects from the different cylinder counting methods, the variance in firing orders drops markedly.

If one begins the cylinder count in each case with cylinder 1 according to DIN 73021, there are a total of eight theoretically possible ring orders for each rotational direction in a at-plane V8. With a cross-plane engine, the total is 16, as here the angle position of the center crank pin is interchangeable. However, not every theoretically possible ring order is implemented in reality. The objective is always the best-possible compromise between the following criteria:

Porsche Engineering carefully examined the question of the optimal ring order for both at-plane and cross-plane V8 engines. Nearly all at-plane engines reidentically, with alternation between banks always a possibility even with a deviating ring order. The result for cross-plane variants was likewise no surprise: particularly with a focus on maximum robustness of the crankshaft bearings, the ring order 1-3-7- 2-6-5-4-8 is the best choice in view of all characteristics — which is the ring order for all Porsche cross-plane V8 engines since the 928. Even so, the other implemented ring orders also have their justifications; here the objectives of the manufacturers in terms of their conceptual decision do vary. The results of the analysis also revealed another interesting point: There are certain ring orders that have never been implemented in reality but which also demonstrate exceptional balance in the fulfillment of the specified objective criteria. One thing is clear in any case: for all the competition between different drive technologies for future mobility concepts, the V8 will continue to have its place under the hoods of premium vehicles–not only as an icon of past glory, but due to the sum total of its technical characteristics.