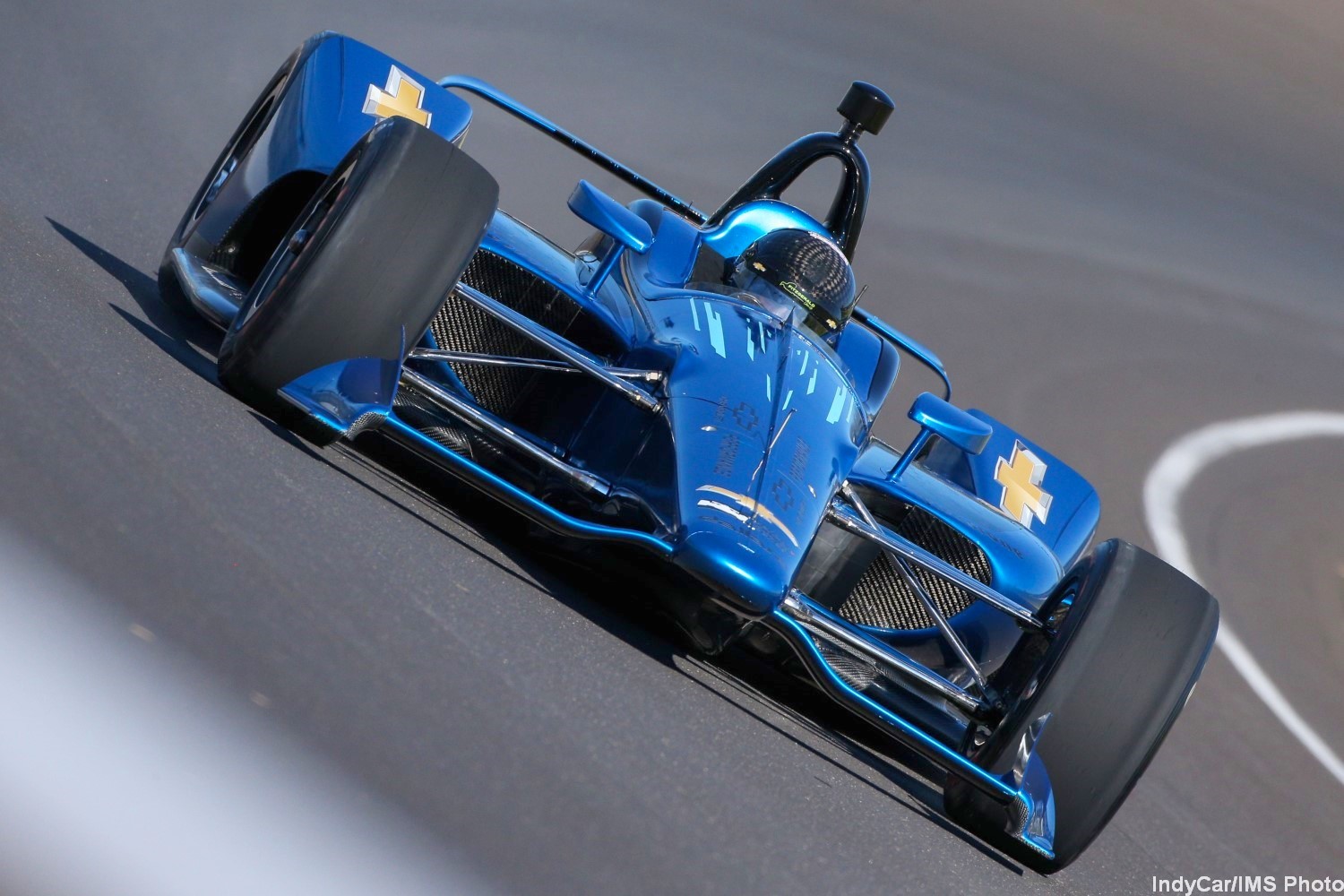 If the first day of on-track testing is any indication, the new Verizon IndyCar Series car is well on its way to making Indy car racing in 2018 even better.

Juan Pablo Montoya and Oriol Servia turned more than 100 laps each on the Indianapolis Motor Speedway oval in their respective Chevrolet- and Honda-powered Dallara IR-12s equipped with the universal aerodynamic bodywork kit making its public debut ahead of being used by all competitors next season.

Afterward, approval of the new car's bolder, sleeker look and performance was unanimous from everyone involved. Buy-in from the two test drivers – among the most veteran and respected around – was essential and secured from the outset.

"From Lap 1, it just felt at home," said the 43-year-old Servia, who has driven Indy cars since 2000. "The car felt great. I was flat on it out of the pits, which just says how good the car felt right away.

INDYCAR, sanctioning body for the Verizon IndyCar Series, announced in April 2016 its intent to move away from aero kit competition to a universally supplied kit in 2018. Dallara, a series chassis supplier since 1997, was named to produce and supply the universal kit.

[adinserter name="GOOGLE AD"]"It's exciting because, for the first time in the car, it drives really, really well," said Montoya, 41 and a two-time Indianapolis 500 winner. "I think they addressed a lot of the things and the car looks great. I think having one aero kit for everybody is great for the sport. The car looks good and it drives really good."

Montoya's car was prepared by Team Penske and Servia's by Schmidt Peterson Motorsports, though INDYCAR is retaining control of the cars until testing is complete in late September. INDYCAR officials watched with nervous excitement as the two cars took to the track for the first time shortly after 9 a.m. ET and methodically worked through the test checklist. By 5 p.m., the checklist had been completed and a potential second day of testing Wednesday was deemed unnecessary.

"We were pleased," said Bill Pappas, INDYCAR's vice president of competition/race engineering who headed up the technical development of the universal kit. "It matched up with our numbers that we predicted in the wind tunnel and CFD (computational fluid dynamics), so we were very happy for that."

Pappas said the test list included short runs by each car to "ensure that there weren't any surprises," followed by longer runs on the 2.5-mile oval to check for durability issues. Everyone at INDYCAR and Dallara felt confident the test would be a success, but there are never givens in racing.

"This is my first experience being part of a car being designed," Pappas said. "Obviously, Dallara did a great job helping us, but you hold your breath until the first competitive laps are run."

Mission accomplished, at least for the first phase of testing. Additional tests for the two cars are scheduled for Mid-Ohio Sports Car Course (Aug. 1), Iowa Speedway (Aug. 10) and Sebring International Raceway (Sept. 26). But the fact that this opening test was completed in half the allotted time is reason to celebrate, if only for a short time.

"Everything we had planned to do in two days, we already accomplished in the first day," Servia said. "We did lots of laps, long runs, and the car feels good. The car feels very benign.

"It just feels right and we're not having any issues or moments out there. Very consistent. My second long run, I think, was one of my most consistent runs I've done at this track in all of my years."