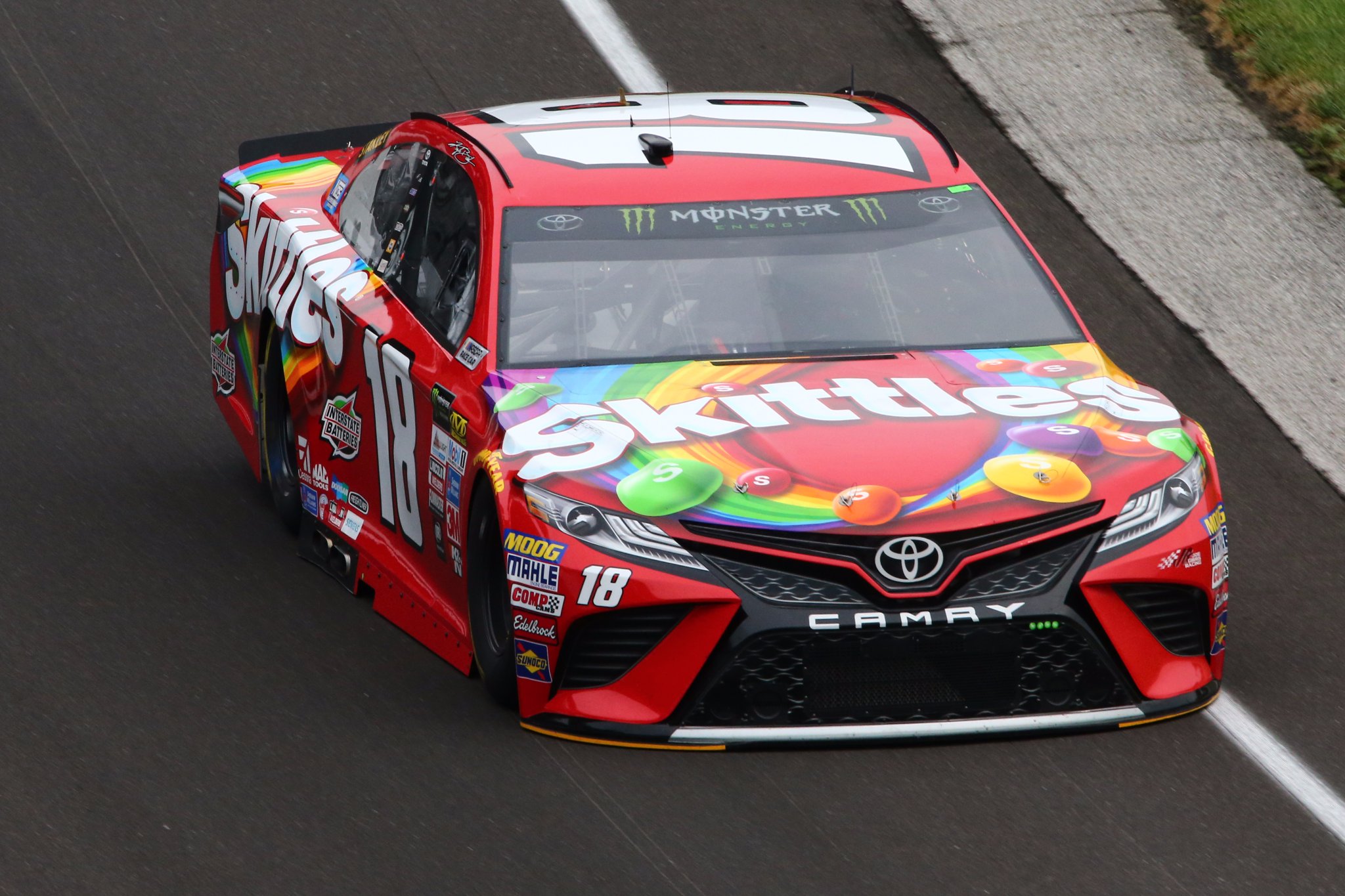 Kevin Harvick will start on the outside of the front row in his #4 Ford.

The Coors Light Pole Award was Busch’s second at the Brickyard, his fourth of the season (all within the last eight races) and the 23rd of his career. And it gives the driver of the No. 18 Joe Gibbs Racing Toyota, who won from the pole last year, a leg up on a record third straight Indianapolis victory.

Busch and Jimmie Johnson, who won at the Brickyard during his 2008 and 2009 championship seasons, are the only two Cup series drivers to have won consecutive races at the track.

[adinserter name="GOOGLE AD"]“We’ve obviously had a really fast Skittles Camry here this weekend," said Busch, who also hopes to break a 35-race winless streak. “We only focused on race trim in those two abbreviated practices (on Saturday), and the guys did a great job. We were just trying to work on the handle for what the race is going to be like (on Sunday), and I wasn’t sure about anything for qualifying.

“So obviously the guys did a great job listening to what our teammates had and what setup they had and what they were able to do. So they put that in our car, and it was pretty fast."

A slight bobble in Turn 1 cost Harvick a chance at the pole.

“I got a little bit sideways coming off of (Turn) 1, and I couldn’t put the throttle down like I needed to," Harvick said. “And then I was probably just a little over-cautious on the entry to 2, because I didn’t want to miss that corner and keep stacking time up.

“Our goal was to run the same speed every time out, and we accomplished that."

Dale Earnhardt Jr. failed to advance to the final round by 0.021 seconds and will start 13th in his last race at Indianapolis Motor Speedway as a full-time Monster Energy NASCAR Cup Series driver.

“The car is a little bit better than that," Earnhardt said. “I got tight into (Turn) 1 and thought, ‘Man, I’d better back (Turn) 2 up, but I didn’t need to back 2 up. So I under drove the second corner and that probably cost us down the back straightaway, or we would have made it into that next round if I had driven the car right.

“But we’ve had good speed all day, and hopefully that’s going to carry on into the race. So we’ll see how it works out."

What made your lap so strong?

“Just felt good. Just felt like I was able to hit all my marks and hit all my marks relatively close to the run before and normally, you know, the laps times fall off as you go here through the stages, but this really overcast today, so that – I think that helped an awful lot and gave our car a lot of grip, a lot of speed and felt really good to put that Skittles Camry on the pole here today. Hopefully we can do a little bit more of that tomorrow."

So what will you be thinking about tonight?

“Absolutely nothing. I’m done thinking about things. I’m just going to go and let everything come to you as it does and when things happen you just kind of got to figure out what you’re going to do after that, so, you know, it’s just a matter of being able to execute and do the things that you know how to do and the marks that you know how to hit and those things are painted in my mind from the last two years here, so certainly looking to go at it here tomorrow."

How was your Camry in qualifying?

“It was good. We obviously have had a really fast Skittles Camry here this weekend. We only focused on race trim stuff there in that abbreviated practices we had this morning and so guys did a great job though. We were just trying to work on the handle for what the race is going to be like later on tomorrow. Felt like we did a pretty good job of that, but wasn’t sure anything about qualifying. So obviously the guys did a good job of listening to what our teammates had and what setup they had and of course just what they were able to do and so they put that in our car and it was pretty fast. It worked pretty good."

What do you think has kept you out of a Cup victory lane the last year?

“You name it, it’s happened. There’s been stuff from me that I’ve messed up on and failed on – speeding on pit road last week was one of them. You know, we’ve had circumstances where cautions have come out while we’ve been leading the race looking at the white flag and it’s going to be a green-white-checker finish and we come in and pit for two right side tires and a couple guys stay out and they win the race. There’s been times where we just got tires – maybe six laps on them – and the rest of the field is under the same circumstances and the yellow comes out and there’s 10 laps to go and everybody comes in and pits and we stay out and get cycled to the back under the green flag. You name it and it’s happened, so I think I’ve counted five or six – there might be more – second-place finishes in that time frame, so that’s obviously frustrating as well too to know that you’re that close and you have that chance to win, but you just can’t close the deal."

Did you intend to have the last lap during the session so no one else could go?

“No, not at all. I mean, when you’re in such a short session anyways with only five minutes, you can’t – even if you were the first guy on the race track and made a lap and came back around, you couldn’t get it cooled down enough and your tires cool enough to go make another run, so pretty much everybody has what they have in that respect. You’re just waiting for a clean race track and, you know, whether or not you go first out or whether you just kind of let it wait and cycle through, we were just kind of waiting on setting our air pressures and everything from the previous run, so that’s why we didn’t get out there and jump out there right away. But all in all just, you know, making sure to hit your marks and have a good fast lap."

Do you like your chances at three in a row better now?

“You know, I certainly would like to think so. I feel like, you know, there’s probably about four or five guys that are right in the same group and were one of those guys, so it’s just a matter or not whether or not, you know, one of those or two of those or any of those guys can distance themselves from the rest of them tomorrow and with their race changes and what they’re going to do and what the weather is going to do for us for tomorrow. So, you know, I’m certainly optimistic about it. I do feel like we’ve got a great shot. I didn’t know what we had at all going into qualifying, but obviously our car’s got some pretty decent speed, so we’ve just got to keep it there and stay up front and lead some laps and of course lead the last one."

Will the stages change the one-car dominance we’ve seen here in the past?

“I think stages will scramble things around a little bit. You’re going to have to play the game where you’re going to be in the right position at the right time to win the race and if that means throwing away some stage points then you’re going to have to do that and if a caution comes out right at the wrong point when you pit or something like that and you’re back in 16th and people are staying out for the stage points, you’re going to be in traffic for much of that run and its basically going to cycle those guys to the lead and you to the back and you’re going to have to work your way through the rest of the day and trying to pass people to get back to the front, so, you know, anything can happen. There’s certainly a lot of different instances that can happen and none that you can predict, so you just have to race the race as it comes to you and, you know, change your strategy or analyze your strategy as the race goes on."