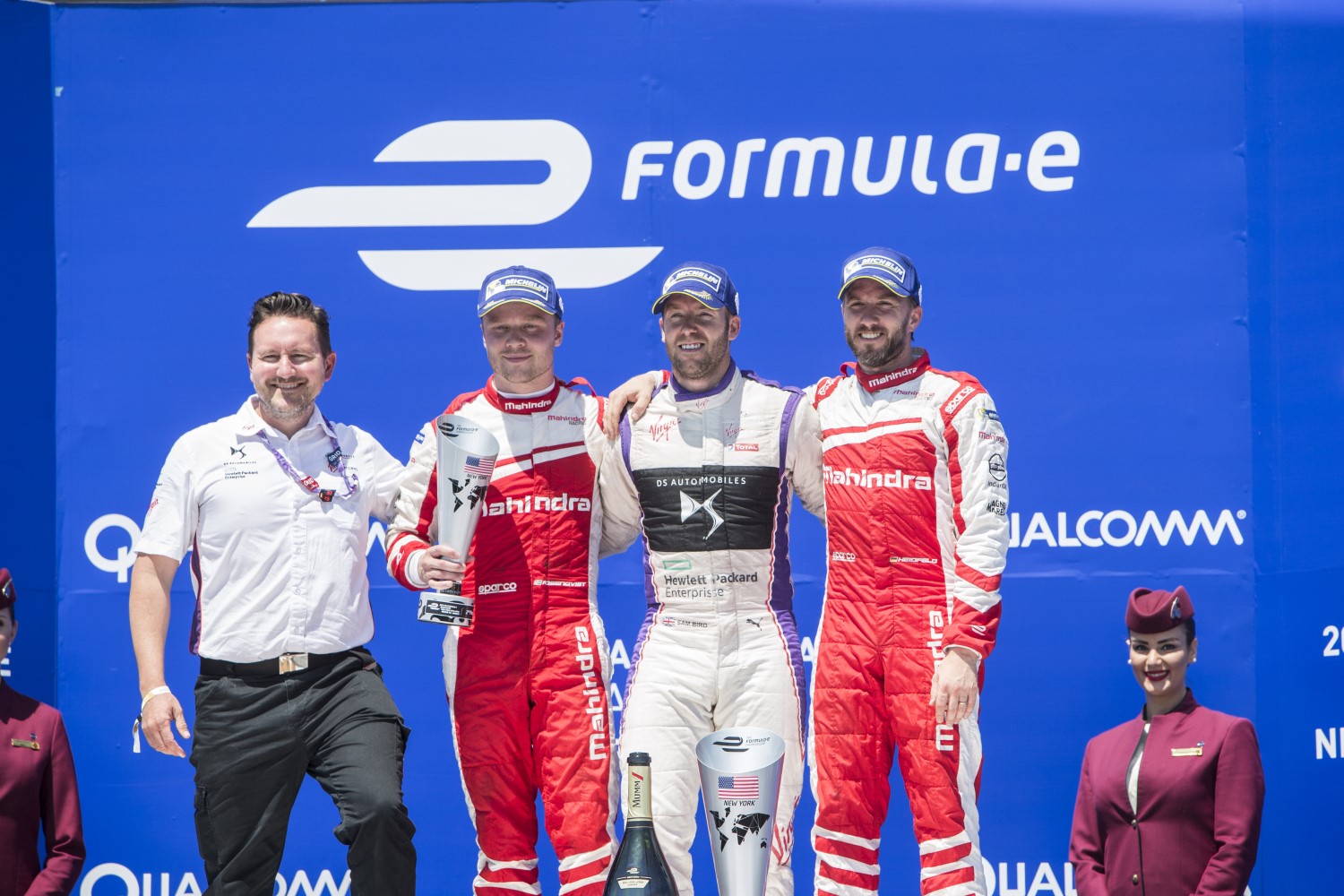 Sam Bird followed up his win in the inaugural FIA Formula E Qualcomm New York City ePrix with an emphatic victory in the second race of the double-header event held on the Brooklyn Circuit.

The DS Virgin Racing star produced a faultless lap to record his first pole position of the season, but he was beaten off the line by the Mahindra of Felix Rosenqvist, and the Swede held on out front during the opening stages.

Bird treated the fans who packed the grandstands to a masterclass in overtaking, executing a perfectly-judged move under braking for the hairpin at Turn 6. Once he was ahead, he simply drove away from the field. Even two Full Course Yellow periods – one of which was brought out when his DS Virgin team-mate Alex Lynn stopped on track – could deter him, and by the finish he was over 11 seconds clear.

“What a weekend, not only for myself but for the team!" exclaimed Bird. “What a car I was given this weekend – it was flying in qualifying, sensational energy management in the race – so hats off to DS Virgin Racing for giving me the best car they have ever given me. It feels incredible to win here – this was an historic weekend, not only for Formula E, but for motorsport in general. There’s never been a race in New York before and this has been a long time coming, and to be the first person to win the first and second races here is really special."

Mid-way through the race Rosenqvist and his team detected an issue with the energy read-out on the car and the decision was made to allow his team-mate Nick Heidfeld to pass to see if he could chase down the leader.

However, the German was unable to make any inroads into Bird’s advantage, and the positions were reversed once more. Second place for Rosenqvist means he maintains a mathematical chance of taking the title when the series concludes in Montreal in two weekend’s time.

“I wasn’t expecting DS Virgin Racing to be as strong as they were, Sam also drove fantastically – he looked pretty on it," said Rosenqvist. “During the second stint, we started to get a few problems with my energy calculations, so we decided to let Nick past and try to solve these issues in a slightly calmer environment. When we got our heads around it, I was able to concentrate and focus again and Nick was kind enough to let me back through for P2."

In the closing stages Pierre Gasly (Renault e.dams) found himself with more energy than the Mahindras ahead of him and started to rapidly close them down. Such was his pace that heading into the final corner of the last lap, he caught both of the red and white cars. In a frantic finale, the series debutant made contact with Heidfeld and bounced off both walls as he crossed the line a valiant fourth to cap an impressive weekend.

“Gasly was obviously closing very quickly on the last two laps and he got beside me before the last corner, luckily on the outside," said Heidfeld. “I didn’t encourage him to go up the inside, and I just tried to stay as close as possible to Felix so that there wasn’t a big gap in front of me where he could have turned in. I did try to give him enough room and we made contact. For sure I didn’t touch him on purpose, and it’s a pity to finish like this, but at least we both made it over the line."

Gasly was racing because championship leader Sebastien Buemi was absent due to a clashing commitment. Buemi held a 32-point lead pre-weekend and the only driver who could topple him was Lucas di Grassi.

After clipping the wall in qualifying the ABT Schaeffler Audi man started the race from ninth. He worked his way up the order, pulling off some strong passes to finish fifth, which means that combined – with his result from the first race – he is now only 10 points behind Buemi with 58 still to play for in Montreal.

Nico Prost was sixth for Renault e.dams, while after a difficult weekend Tom Dillmann was pleased to score some points for Venturi in seventh. The battle for the final top-10 positions had the crowd enthralled throughout with places changing lap-by-lap. In fact, it was only on the last lap that Jean-Eric Vergne worked his way back into the points following an early unplanned pitstop to remove some damaged bodywork, yet he finished eighth!

Robin Frijns ran an incredibly long first stint for Andretti, staying out for at least three more laps than any of his rivals. This meant he had way more energy at his disposal over the closing stages and he overtook four cars on the last lap to finish ninth.

Jerome D’Ambrosio had been in the thick of a wheel-to-wheel battle with his Faraday Future Dragon Racing team-mate Loic Duval, and ultimately it was the Belgian who came out on top to get the final point for 10th. Daniel Abt suffered a technical glitch that caused his first car to grind to a halt on the opening lap, but he at least bagged the consolation of the bonus point for setting the Visa fastest lap.

The challenge of staging a race in New York City had eluded some of the finest people in motorsport, but Formula E’s unique brand of all-electric racing succeeded – and pulled it off. The sold-out event provided exciting racing, the track was challenging and the 18,000 fans who came to Brooklyn over the weekend went away having been thoroughly entertained.

Now the season is poised for a thrilling conclusion with Buemi and di Grassi going head-to-head for the title in Montreal on July 29 & 30. It’s going to be electric.