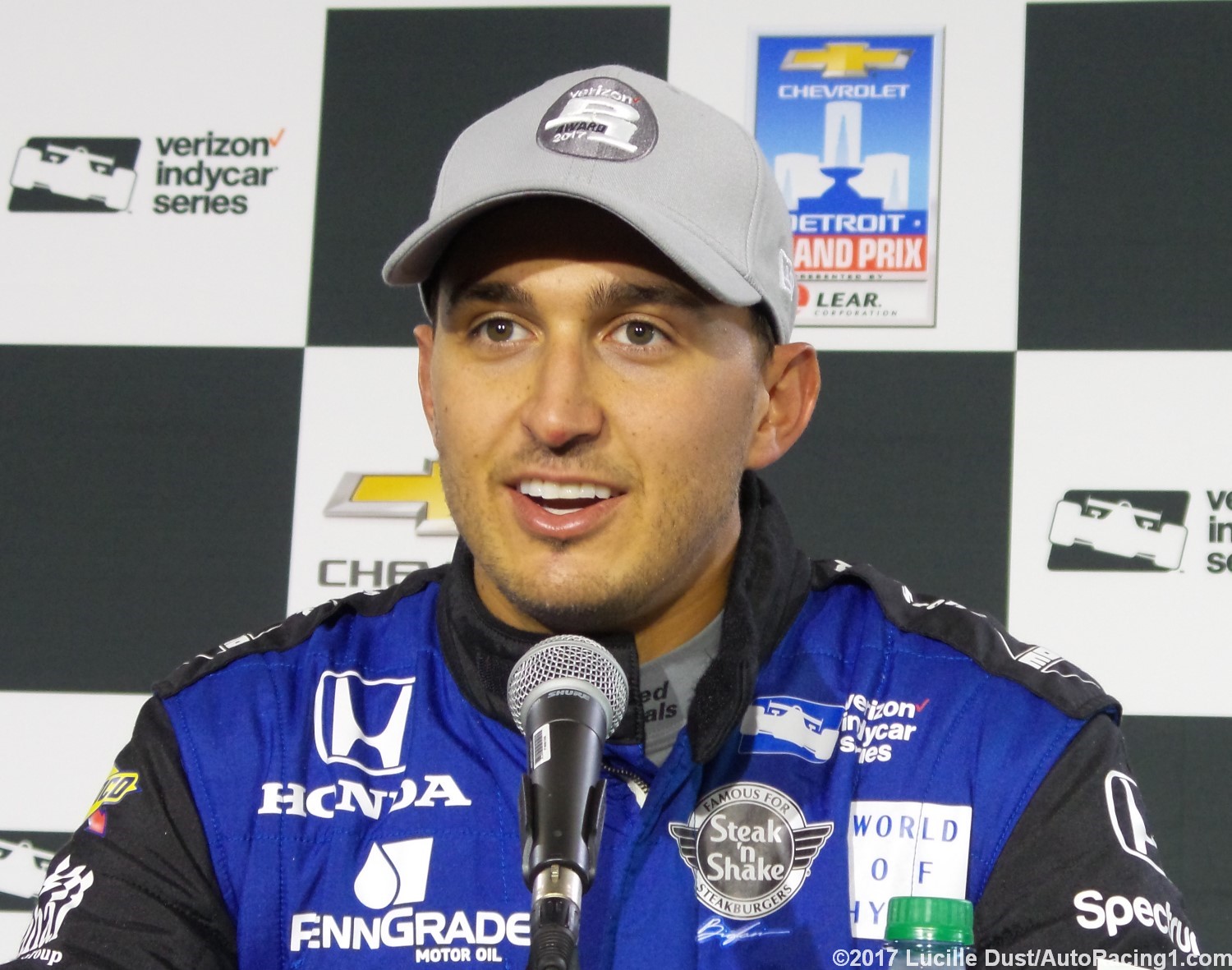 THE MODERATOR: We'll go ahead and get started with our Verizon IndyCar Series qualifying press conference for race one of the Chevrolet Detroit Grand Prix presented by Lear. We are joined by the driver of the No. 15 Soldier Strong / TurnsForTroops.com Honda, Graham Rahal.

Graham, it's been a little while since you've been starting first for an IndyCar race event. I'm sure it's a good relief for you in such a challenging track to be starting up front.

GRAHAM RAHAL: For sure, yeah. It's a little uncharted territory for me the last handful of years. We're used to having to charge from the back. This is a pretty welcomed sight.

Obviously Helio has been a great competitor. This weekend, gone back and forth, traded blows. I thought group two would get us just due to having some rubber down and stuff. Looking at the times from last year, there was a bigger spread, I think. I was hopeful that wasn't the case.

But in the end, it was very, very, very close. We were fortunate obviously that he had a little penalty there. No matter what, he's going to start next to us. We all know he's going to be a fierce competitor out there.

As I said yesterday, I feel strongly about my racecar. I feel really good about our performance here this weekend. We're going to go out there and try to control the pace, hit our fuel targets, if that's something we need to do. We're going to look at strategy here in a couple hours.

THE MODERATOR: Like you said, your car has been very strong from yesterday to today. Did you have a feeling going into the qualifying session, with all of the challenges of your competitors around you, you would have a shot at pole?

GRAHAM RAHAL: I felt like I would. I definitely felt like I would last night. I felt for the first time in a long time I had a legitimate shot, that it wasn't going to — that if I did my job, and I did my best, I felt we would be on pole or we would start on the front row.

Rarely does that actually work to plan, but today it did. Pretty pleased with that.

THE MODERATOR: I think I remember you saying you knew your car was going to be a great racecar. That's been consistently the way for your team. What do you think changed this weekend?

GRAHAM RAHAL: I just think we found a fairly good balance 'cause I actually do think our racecar will be better than our qualifying car, or at least I'm hopeful of that. The sense it gives me, I typically set up a car more for race day than qualifying day. But I feel pretty strong about where we're at.

Again, I don't want to put any extra pressure on myself or my team. But if we go out there and do our job today, yellows don't play a huge role in strategy, things like that, where alternate strategies could pay off, I feel pretty good about where we're at, without a doubt.

THE MODERATOR: Questions for Graham.

Q. A lot of times drivers will say in this series it doesn't really matter where you qualify. Here it really does matter where you qualify. How important is it? This is a really tough place to get around.
GRAHAM RAHAL: It is and it isn't. It is tough. At the same time, tire degradation, things like that have played a role in recent times. There's been quite a lot of passing anyway. I hope today it's hard as hell to pass, so…

But as you guys know, I mean, I'll say this, on the start, I've gotten wide in turn one a couple times. There's enough grip to muscle your way through. I have no doubt that Helio is going to push for everything he can on the first lap or two to try to get by.

He's going to give it everything he can. It is a hard place to pass. At the same time it's a physical place. The straightaways being smoother now I think into seven is going to create a much better passing zone than it has before. There should be plenty of action.

It's nice now they give us a set of reds to use yesterday. Some guys were able to do a couple of runs on them. Unfortunately we had a little gearbox issue in practice two yesterday. We had to change the entire box overnight. I didn't get to do a second run on them. A little bit hard for me to say.

You know, hopefully they don't wear for us at all, and they wear for everybody else a lot. But typically our car's good on tires. I don't know why, my driving style, normally we're better on tire deg than others. I don't know why that is, but it seems to be the case.

Fingers crossed, today is one of those days. As we've seen here in the past, it's thrown strategies completely out the window. I remember a couple years ago we finished second, but when we went to use reds in the middle of race, we only did eight laps and pitted because the deg was so bad. We'll see.

Q. Graham, yesterday you said you felt like you had a good starting spot, you can pull away. Do you still feel that way? Yesterday you said in the afternoon session your handling kind of changed. Did you debrief with Oriol at all? Will you make any changes between now and the race?
GRAHAM RAHAL: We made just one or two changes overnight, pretty small stuff. I don't see us making any changes going into the afternoon.

Obviously this afternoon we're not going to be doing 73.9s. Race pace I think is 76, something like that. Physically there's know way you can actually do a 73 and keep up. We'll have to see how it plays out.

Do I feel like if we can get up front, we can control it? I do. So we'll see.

I'll say this. I'm very hopeful now. Who knows what will actually happen. But if everything goes smooth and we can lead through the first couple of laps, I'll be pretty pleased because Helio is probably the hardest guy to pass on the planet. I was nervous about that. I'm not going to lie to you. Hopefully we can get out front, get clean air and go.

Q. Graham, thanks for talking about tires. My readers know a lot less about them than I do, which is not much. Can you tell us which tires you used today, kind of in a Tires 101 kind of way, how that is going to affect what you use in the race.
GRAHAM RAHAL: Obviously you have the blacks, which is the primary compound. The reds are the alternates. We ran both blacks to start the session. Then we finished on alternates. The alternates are a little bit quicker for me. With my car, the way it's balanced right now, the reds are a little bit more lose, which is not normal. Normally when you put the reds on, it grips up the rear of the car. I've kind of gone the opposite way this weekend.

We'll start the race on reds. Obviously we have to run blacks. We'll go to blacks next stint. I haven't used very many sets of blacks this weekend on purpose, saving them up. I think we'll be able to go to blacks and carry that on through.

Q. Have you thought about taking the car 7 driver Mikhail to Steak 'N Shake?
GRAHAM RAHAL: It was close no matter what. It was close. I mean, Helio still gets a point. It's not like it's the end of the world, right? You get a point for being fastest in both groups. He already had six thousand poles, he doesn't mean six thousand and one. Nice of him to share one.

He's still going to start right next to me. Like I said, we all know Helio. He's aggressive, very aggressive. He's going to be right there. I mean, I'm not sitting here believing that there's not going to be a threat when it comes into turn one and everything else.

See how it plays out.

It seems to be very, very, very close, very competitive. It's hard to differentiate the two. I was saying this a second ago, I haven't looked at fuel mileage yet. I've been so focused on just pounding out good laps, I haven't looked yet. So we'll see how that plays a role.

What could play the biggest role in this race, which is sad but true, is our pit box is pretty far back. If it comes to an everybody-pitting-under-yellow scenario, we're probably going to be in trouble because by the time we pit and we're ready to go, it's going to be about 10 cars deep. All those guys are going to still be coming down pit lane. That's not ideal at all.

But that's what we get for qualifying 20th at Indy, right, or Indy GP. That's the way it goes.

Q. On the track there's a lot of cement. I don't see how much is cement, how much is asphalt. Is the cement good for the red tires?
GRAHAM RAHAL: Cement is a little abrasive because of the grinding and everything else, but it has a pretty good level of grip right now, the brake zones and stuff. It's probably better.

In theory, it would wear it more, but it's also slipping less. Sometimes that will help. Again, you know, it's hard to say. Remember last year, a lot of guys started on reds and couldn't make them last a stint. So strategies kind of went all over the board. Pag in race one was able to make them last. That's got to be our goal.

THE MODERATOR: Graham, thank you very much.

THE MODERATOR: Helio Castroneves will not be joining us in the teleconference room. He will start second next to Graham Rahal.