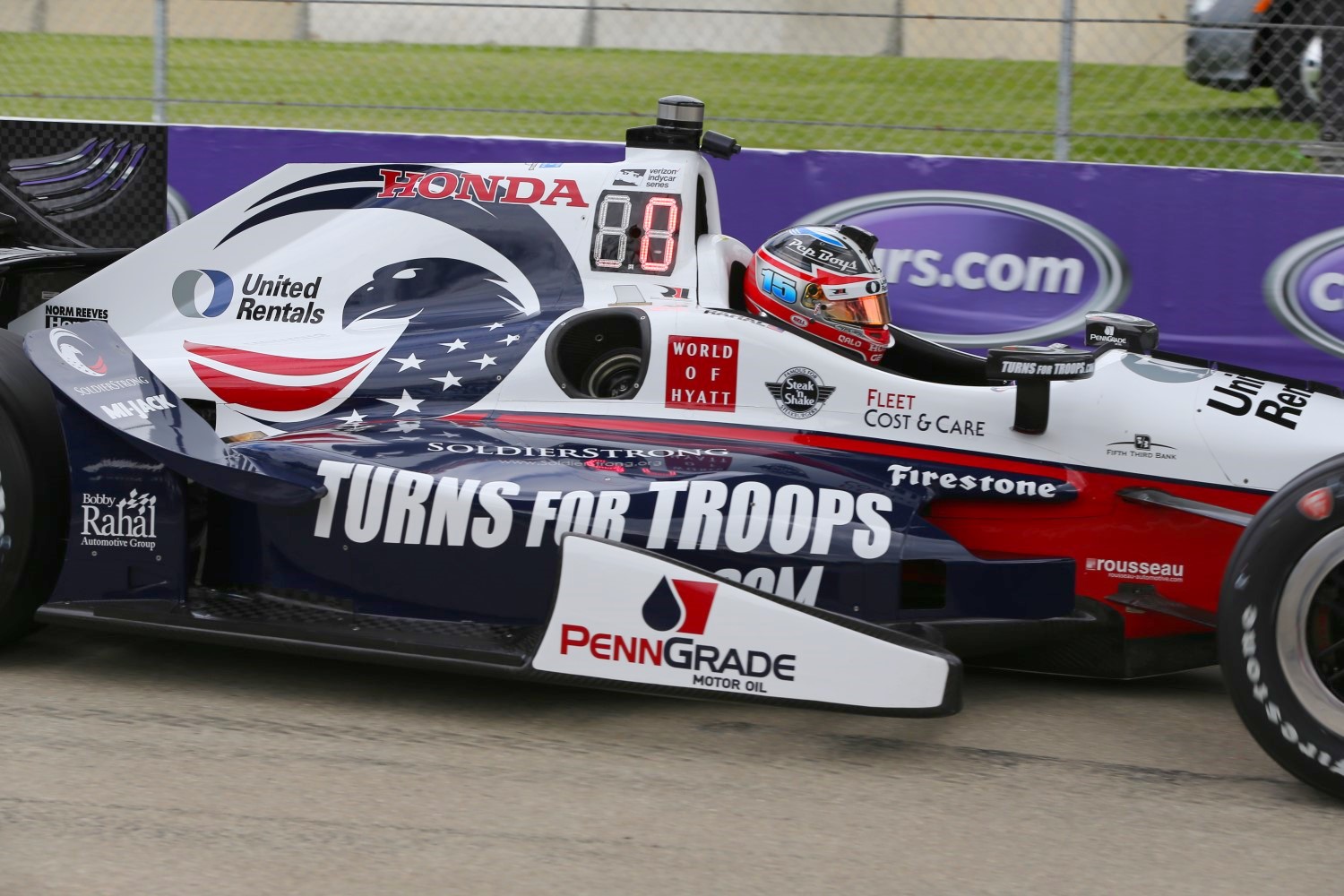 Helio Castroneves lost his fastest lap for not slowing down for a yellow flag, and will now start on the outside of the front row beside polesitter Graham Rahal. They were the only two drivers to break into the 1m13sec bracket. Castroneves' 2nd fastest lap was good enough to still give him the 2nd quickest time. Indy 500 winners Takuma Sato and Alexander Rossi will start 3rd and 4th with James Hinchcliffe rounding out the top-5.

It marks the third pole position in Rahal’s 11-year Indy car career and first since he was the top qualifier at Kansas Speedway in April 2009.

Honda powered cars took 5 of the top-6 positions, something you would never see in recent years but the Honda engines have more power this year, enough to compensate for the extra drag produced by their closed Butt Bumpers.

"It's a little uncharted territory for me the last handful of years," Rahal said. "We're used to having to charge from the back. This is a pretty welcomed sight."

Qualifying consisted of two groups receiving 12 minutes of track time each instead of the typical three rounds of knockout qualifying seen at Verizon IndyCar Series street- and road-course events. Rahal established the standard in Group 1.

Helio Castroneves clocked a lap of 1:13.8901 (114.494 mph) in the second group that would have won the pole, but was penalized by INDYCAR for not reducing his speed in the area of a local yellow and had his fast lap negated. Mikhail Aleshin (No. 7 SMP Racing Schmidt Peterson Motorsports Honda) brought out the local caution in the Turn 7 area of the 14-turn, 2.35-mile temporary street course. Per Rule 7.1.3.2 of the 2017 Verizon IndyCar Series Rule Book, other drivers must decrease their speed by at least 15 percent when traveling through a local yellow area. INDYCAR stewards ruled that Castroneves did not obey the rule.

Castroneves' next-best lap in the No. 3 Hitachi Team Penske Chevrolet of 1:14.0414 was still good enough to be fastest in his group, so he will start outside Rahal on Row 1 in this afternoon's race. Rahal and Castroneves each earned a championship point for being fastest in their groups.

Coverage of this afternoon's 70-lap race begins at 3:30 p.m. ET on ABC, WatchESPN and the Advance Auto Parts INDYCAR Radio Network. The second race of the weekend doubleheader airs on the same outlets at 3:30 p.m. ET Sunday.