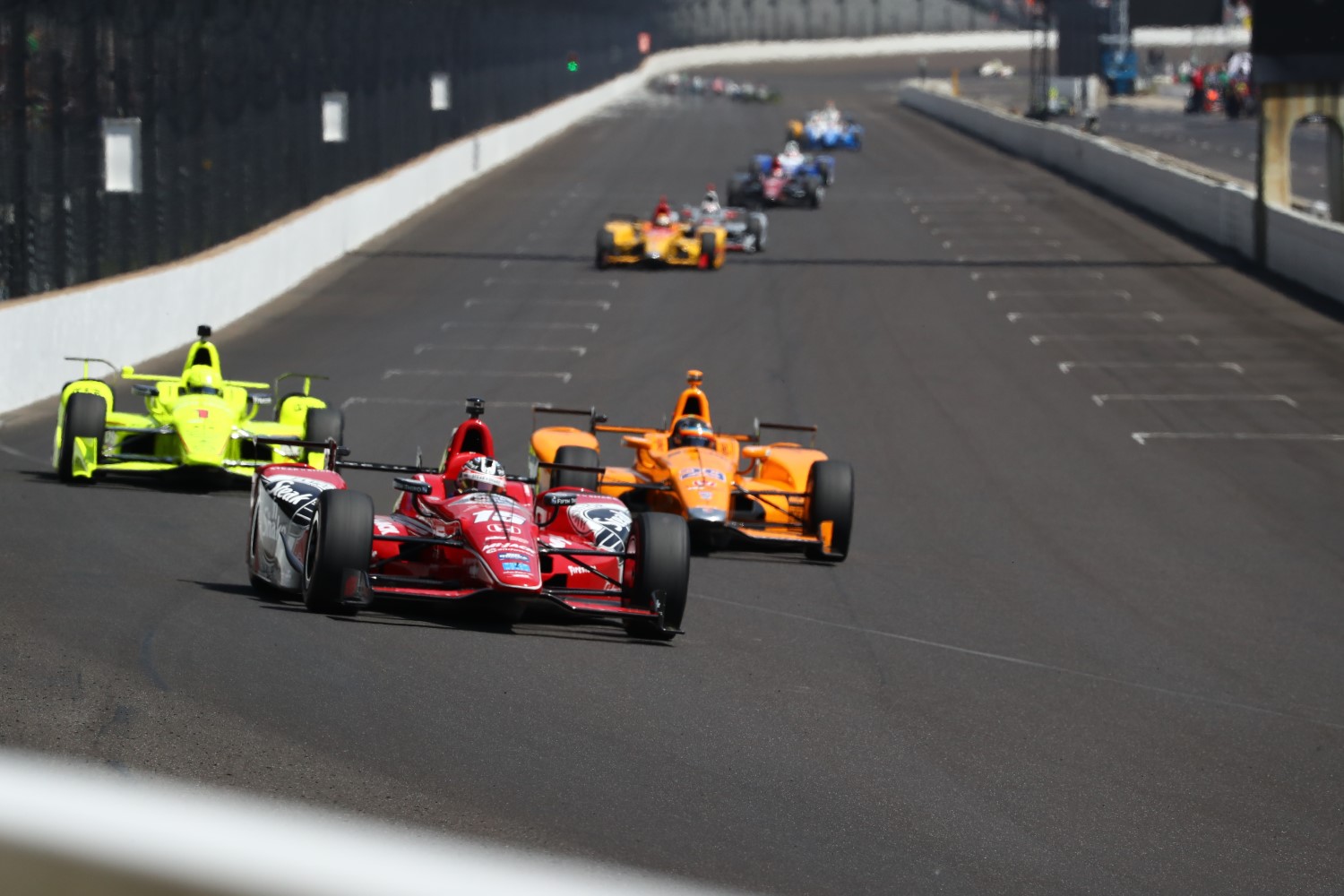 The drivers had a busy day yesterday meeting with the media before the greatest spectacle in racing. This is part of their job and the media is heavier than normal this year with the Formula One two time champion, Fernando Alonso, driving for his first time in the 500 this weekend. Alonso is confident about his upcoming rookie drive and commented on the changes he has been experiencing in IndyCar. "In F1, it is only the mechanics and the race car on the grid. No journalists. Here there are a lot of people on the grid. Having the support from the fans that close before starting the race is a unique thing."

Alonso was asked how he will handle being in the car for 3 1/2 hours. He responded, "I think, depending how tough is the race, meaning if everything goes well and we have no big issues, it will be a pleasure to be there and it will feel short because you love driving a race car. Things don't always go as planned. There are six drivers on our team and we are a big team and we share a lot of things. I think I can trust that we will have the best conditions out there in the race. The problem will be executing well all the procedures that they will review with me."

He also is not worried about all the Honda engine blowups either.

"As long as [the problem is] in practice, it's OK," he said. "If you put it in another way, if the practice today was 10 minutes shorter, that [failure] could happen on the parade lap. So I think it's a good thing that these things happen in practice. We can make sure that we learn, and we save engines for the race. So no concerns, not thinking [about] that problem, and I'm 100 percent [sure] will be OK."

"We had some yellow flags; we had some laps to test different things on the car. And even very normal things that for everyone else will be straightforward. I don't know where… if we change something on the car, where to find it on the steering wheel, and things like that. So simple things that, I am still running behind a little bit, but today I think we put all the ticks in all the boxes, and I am extremely happy.

Scott Dixon, the pole sitter for Sunday and winner of the 2008 Race, was asked about how he thought the race will run. " You can see from many drivers over the years at the laps led during the race and somehow the win just gets taken away from you. This place owes nobody nothing. If you keep knocking on the door, eventually it might open up. It's a tough place. It is almost impossible to get thing right for a three and a half hour period."

When asked about what having the pole means to him, The humble Dixon replied, "It gives me bragging rights for a couple of days. That's about it. I think the only advantage is staying out of trouble for the first few laps. We have seen many first lap incidents here."

"It is always nice to have speed here, but we don't have the ability to trim out the race car like we did when we won in 2008 and that gave us a chance to break away from the pack. Right now I don't see that happening. With the weather looking cooler for race day, it will make it more of a pack race."

And just a few days after being robbed at gunpoint, Dixon is happy to be able to have a good distraction by focusing on the month of May and the race. Chip Ganassi Racing is back with Honda engines this year, after having the Chevy engine for three years. When asked about the reliability of the Honda engine, Dixon responded, "I think Honda has done a great job. This is the circuit that we thought we would be best matched for, this and the other super speedways. We have not gotten to the end of the race, so you can't take anything for granted. It is definitely a concern after seeing other teams with issues, it is not a short race. It is on everyone's mind."

[adinserter name="GOOGLE AD"]Juan Pablo Montoya, making his fifth run, with Team Penske this year, does not know what the secret is to winning this race. Even though in his last four runs, he has won it two times and finished in the top five another time. "There is no secret. That is the secret. You just have to execute well on race day. Everyone needs to do his part. And if we all do our part and give ourselves a chance, that is all you can ask for. I don't overthink it or over analyze it or anything. We do what we need to do and honestly hope that what we do is good enough to get us the trophy. Some people are going to have a great car and others are going to be terrible. On race day, you have to try and manage what ever is dealt to you."

James Hinchcliffe, driving the number 5 Arrow entry for Schmidt Peterson Motorsports, says it never gets old doing driver intros on race day with 32 of your colleges and 350,000 of your closest friends. Hinchcliffe continued, "To win the Indy 500 is a career defining moment. It stays with you the rest of your life. It is like immortality. Your face is on that trophy forever. Every time your name is mentioned afterwards, you are the Indy 500 winner so and so. "

" Carb day is shockingly valuable. This my seventh attempt at the 500. I have seen it here a couple of times where you will have a certain kind of track condition and weather condition all practice week and then Carb day will be completely different. And that is what it ends up being on race day. This year, we are not going to be having the conditions on Carb day that we had on Monday through Friday last week, even Monday this week. The track is very sensitive to the temperature, the changes in temperature And so it going to be a lot of guys trying to figure out driving in cooler conditions compared to all the heat."

AR1 talked with Ed Jones, one of the 4 rookies in the race, but the only one that drives the full season for Dale Coyne Racing. I asked Jones about his feelings for the race. "Yes, I am feeling really good. I think we have a really strong race car, probably better than what we had in qualifying even. I felt pretty good on the past Monday. But we don't know because the conditions are changing a lot here in the last few days, it's been up and down. I think it is still going to be a lottery. Some guys cars work better in the cool than others in the heat. I feel comfortable but at the same time, a lot could change."

We asked about the Honda engine. Jones replied, "I know that Honda is doing everything they can to keep the issue under control. But you can't be sure of what is going to happen. We know that the Honda is the strongest engine out there at the moment. That is always the risk when you are performing that much better than your competitors."

Jones went to visit Sebastien Bourdais, his teammate that had a terrifying accident in qualifying last Saturday that landed him in hospital. Jones continued, "Seb has made such a big difference for my season so far this year. Every race, a lot of people have been surprised how strong I have been as a rookie. A lot of that is due to Seb's help. In a selfish way it is going to be very annoying to not have him around."

The logo for the 102nd Indianapolis 500 presented by PennGrade Motor Oil blends evolution and continuity with styling cues from the popular logos for the 100th and 101st editions of "The Greatest Spectacle in Racing."

The sleek, colorful logo was designed by the IMS Creative Services team and Indianapolis advertising agency Mortenson Safar Kim. The 102nd Indianapolis 500 is scheduled for Sunday, May 27, 2018 at the Indianapolis Motor Speedway.

"The design of the 102nd Indianapolis 500 logo is a perfect mix of the tradition that everyone holds so dearly about this great race and its exciting future," said IMS President J. Douglas Boles. "The color scheme also is a salute to the patriotism and sacrifice that we cherish every Memorial Day Weekend at IMS."

In an evolution from the logo for the 100th Indianapolis 500, the design for the 102nd "500" includes the iconic IMS "Wing and Wheel" logo and its spirit of speed. The "500" is underlined with a segment of the world-famous 2.5-mile oval, designed to represent the exit of Turn 4 down the main straightaway and into Turn 1.

The typeface represents the athleticism, competition and cutting-edge technology that are hallmarks of "The Greatest Spectacle in Racing."

Every part of the logo leans with a 20-degree shear, symbolizing the relentless forward motion of the race's competitors and the Indianapolis 500's second century of competition.

The color scheme features red, white, blue and steel, which together represent the American spirit and tenacity that has formed the core of the Indianapolis 500 since the inaugural race in 1911. These colors also were included in the logo for the 101st Indianapolis 500 that is taking place this Sunday, May 28, maintaining continuity between the two events.

Fans can renew their tickets now for the 102nd Indianapolis 500 presented by PennGrade Motor Oil – at 2017 prices – as the Indianapolis Motor Speedway is offering pre-race renewal to its loyal customers for the first time. Renew or upgrade tickets at www.ims.com/renew. The renewal window will continue through 8 p.m. (ET) Sunday, June 18, 500 hours from the anticipated finish time of this year's race.

Visit IMS.com to purchase tickets for the 101st Indianapolis 500 Presented by PennGrade Motor Oil on Sunday, May 28, and for more information on the complete Race Weekend schedule at IMS.