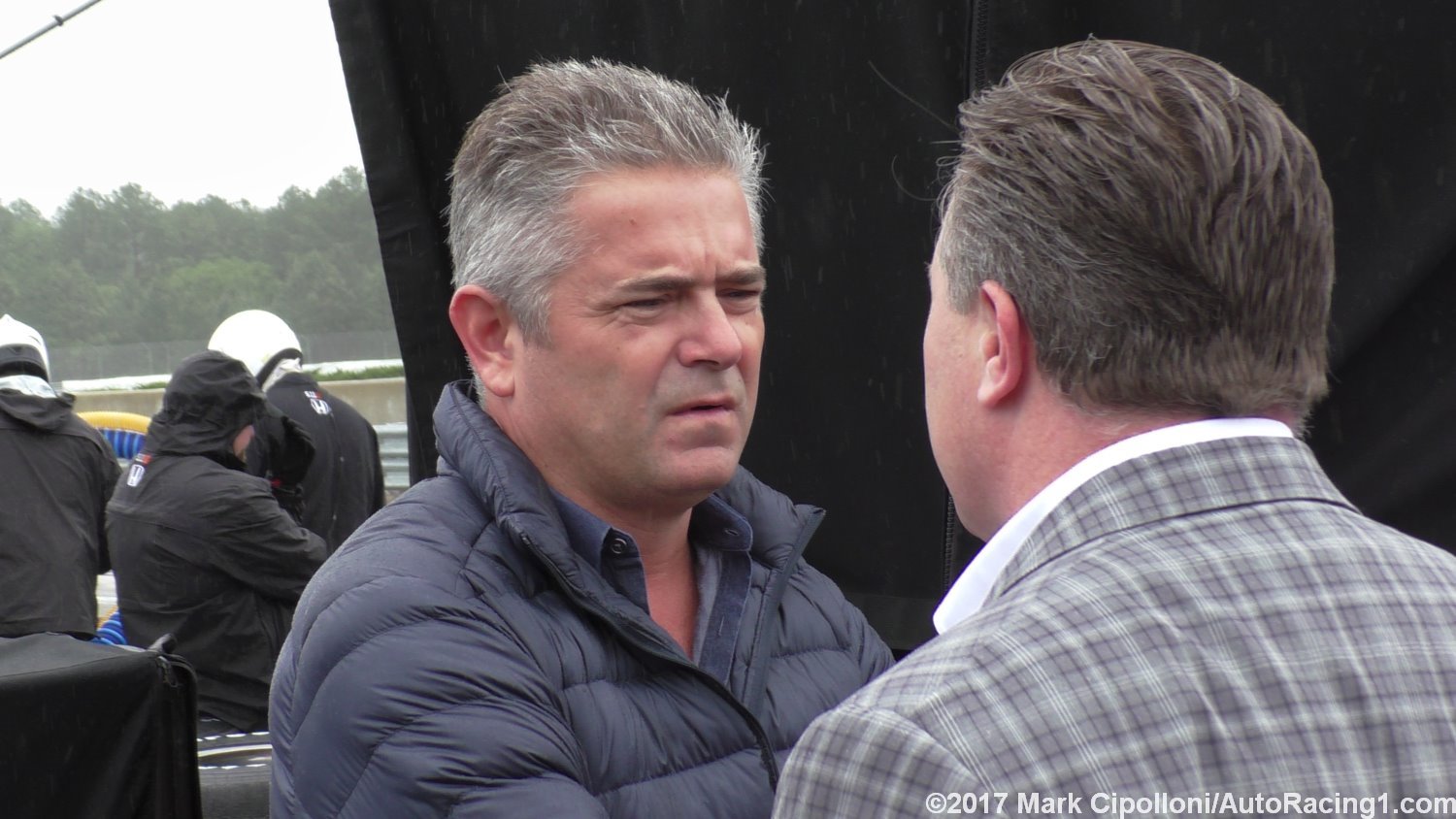 THE MODERATOR: Two-time driving champion, one of our favorite people, one of the classiest drivers to ever compete here, Gil de Ferran. It's nice to have you back at Indianapolis. Tell us how you've been.

GIL de FERRAN: Thank you. It's a great pleasure to be here. I'm sorry for everyone that it's raining a little bit. But, yeah, I wanted to be here, so I planned it all (laughter).

Joking aside, it's very nice to be back in Indy.

THE MODERATOR: It's interesting. Obviously we know that you're working with Fernando. One of the things that's always interesting when we have drivers who have had Formula One experience who come here, all the way back to Eddie Cheever would talk about this, all of a sudden there's this thing called team, all of a sudden there's this thing about sharing information. There's cameras and pictures being taken in the car. They've come from a world where there seems to be a gate you have to swipe at every turn. There's high interest in protecting the technology, a lot of proprietary things.

THE MODERATOR: It's a different world. How have you helped him negotiate that?

GIL de FERRAN: First of all, every team is a little different, both in IndyCar and in Formula One, you know. I am not a hundred percent familiar with what the culture is at McLaren, but I can tell you that interestingly enough, when I was helping run the Honda F1 operation, we had a lot of exchange between the two teammates, which at the time was Rubens and Jenson. I made a point of that because I thought it was beneficial to both of them.

To be honest, I think Fernando has slotted very well into the Andretti camp and the whole Andretti team culture. Really fit right in. There's been a lot of exchange between all the drivers. Everything has been very positive.

THE MODERATOR: That's been the report from him, as well.

GIL de FERRAN: There you go.

THE MODERATOR: It seems from the outside he's having a good time with it.

[adinserter name="GOOGLE AD"]GIL de FERRAN: Yeah, I mean, that's certainly my impression. To be honest, I'm not spending that much time thinking about that. I'm more thinking about what needs to happen next and trying to think what's going to be the next challenge ahead, both for Fernando and for the team, trying to think forward and see what is the best plan to tackle the different situations.

So far it's going good.

THE MODERATOR: Questions for Gil.

So you're not trying to bring somebody on that has very little experience driving very high-performance cars, being in different racing situations, so on and so forth. You're really trying to bring to his awareness some of the nuances about what he's about to encounter so he can think about it ahead of time.

I suppose that would be a little bit different if you were dealing with a younger, much less experienced person, which perhaps I would have to be a little more prescriptive in my role.

So in many ways, there's a big difference there on how you deal with one and the other.

Q. Looking at the time sheets, it's quite impressive. Fernando is fifth so far. Talking about your own career, can you remember what was your biggest problem when you raced the very first time yourself on an oval?
GIL de FERRAN: It was difficult to really understand, when I first came over, how complex setting up a car for the oval actually was. I was able to be relatively competitive at the time. But really understanding what I needed out of the car and what changes needed to happen in the car for me to be competitive over a stint, over a race, and what will happen in the end of the race, so on and so forth, was a little more complex.

It took me a little bit of time to understand how not to destroy the tires, so on and so forth.

Q. Fernando said yesterday that you prepared him that qualifying is going to be 'some horrible laps' is the term he keeps using. Is that what you see as his biggest challenge that's going to be a bit different? Is there anything that's taken him a little bit longer to pick up and get comfortable with?
GIL de FERRAN: Well, to be honest, knock on wood, everything has been going quite smoothly. We had a couple of small issues that delayed us a little bit earlier in the week. But honestly, I can't really point out to anything that really set us back a huge amount.

So far, you know, the preparations are going well. Obviously tomorrow is going to be a new challenge. It really depends on what the weather does, so on and so forth, as to how difficult or easy those laps are going to be.

But nevertheless, qualifying here is always a challenge because the car is right on the edge. That's how you get the most speed out of it, by reducing downforce, and therefore drag with it, but still maintaining enough grip and balance to be able to do four laps. So necessarily the car feels very, very edgy.

But, like I said, everything that we could do to prepare for the situation, what will come over the weekend, has gone well. But we'll see what happens tomorrow and over the race weekend.

Q. Something that's always stayed with me is a comment that Emerson Fittipaldi made when he said it took him about five years to figure out this race. Can you talk about personally how long it took you to figure it out and where you think Alonso is in his learning curve.
GIL de FERRAN: Well, it's hard to make comparisons. There are different eras and different cars. So it's really hard to be specific about that, to be honest with you. All I can tell you is I can talk about myself in greater detail than I can talk about others because I was there myself.

I came here in '95 for the first time. I found it quite difficult. The cars were very powerful back then, didn't have a lot of downforce. It was even hard to go flat at the time. Even though we had a lot of practice, believe me, I needed all the practice.

Unfortunately in the race, I got caught in some debris. I hit some debris from the first corner incident, so the race lasted all but half a straight for me.

When we came back in 2001, I was with Team Penske, which I considered to be the best team at the time. Probably still one of the best. I was a more experienced driver. I understood IndyCar racing a lot better than I did in 1995.

Quite frankly, I didn't feel uncomfortable at all. In fact, quite the opposite. I felt very much in control to everything that I was doing. We had a very good race. We had a chance to win. Ended up finishing second.

Q. How much are you enjoying your role this month?
GIL de FERRAN: Very much actually. You know, I said it before, but to work with a guy like Fernando is really an honor I think for me, and I think to some extent for the team. I can't speak on their behalf, but you can somewhat feel that.

I know that I'm working with someone that is, like I said, one of the best drivers that I certainly have seen. And frankly, he's a really nice person. It's going great.

Q. The situation that Fernando landed being over there with Andretti, how it came about, how critical was it for him to be at a place that had two former drivers that were in F1?
GIL de FERRAN: What do you mean?

Q. With Rossi being in F1, with Takuma back in the day.
GIL de FERRAN: I don't know if I can strip that out of the whole equation of the dynamic between the drivers in the Andretti team. I think I would stick back to my original answer about how well all the group is working together.

For me, it's hard to pinpoint whether a couple of the guys, to your point, Rossi and Sato, had extensive Formula One and European experience or not. But I think the whole dynamic inside the Andretti camp is working very well.

Q. Can you tell us how this all came about. Did he contact you? Did you contact him? Was it a phone call? Was there a point in time where you found out and you jumped up and down or…
GIL de FERRAN: Well, when they announced that Fernando was going to do the 500, you know, I still have a lot of relationships in, call it, European motorsports, including Formula One. One of them is Zak. I sent an email to Zak and said, Hey, fantastic initiative, great job. I said, If I can help you, then just tell me. It was more like a congratulatory note, because I really think that what they did to bring Fernando over here is fantastic for motorsports. I think it's clearly fantastic for IndyCar. That's easy for everyone to see. But I think it's also great for Fernando and great for Formula One because he will make, he's already making, new fans here in North America. These people will follow him wherever he goes. I think the same goes for McLaren. Having them back in the Speedway is a great reminder of the heritage of the team.

Anyway, that's how I felt about it. I wrote him a little note, you know, couple paragraphs, then the next thing I know they contacted me. I said, Yeah, it will be an honor. I would love to do that, so…

Q. Pole Day is almost upon us. Is Fernando to the point now where if he makes the Fast 9, he has to do that bonsai run on Sunday, can he go the 10 10ths with confidence, or does he have a little bit left?
GIL de FERRAN: I'm not so sure I understood you.

Q. Is he ready to make a qualifying run for the pole?
GIL de FERRAN: It's hard for me to judge that. I mean, everything is going well, like I said. Today we had another good hour and whatever it was. I think we're as prepared as we're going to be.

Q. Besides you, is there also some assistance from Dallara to give him more understanding?
GIL de FERRAN: Say again.

Q. Besides you and Team Andretti, the staff, engineering, is there also some technical assistance from Dallara to give Fernando a better understanding?
GIL de FERRAN: Not that I know of. I think, you know, Andretti and McLaren have done a lot I think to feed Fernando with as much information about the race, about the car. And the Andretti engineers, frankly, are fantastic.

THE MODERATOR: Gil, it's really great to see you and have you in this role. Thanks for coming in.

GIL de FERRAN: Thank you. It was great to be here. I'm really enjoying it.