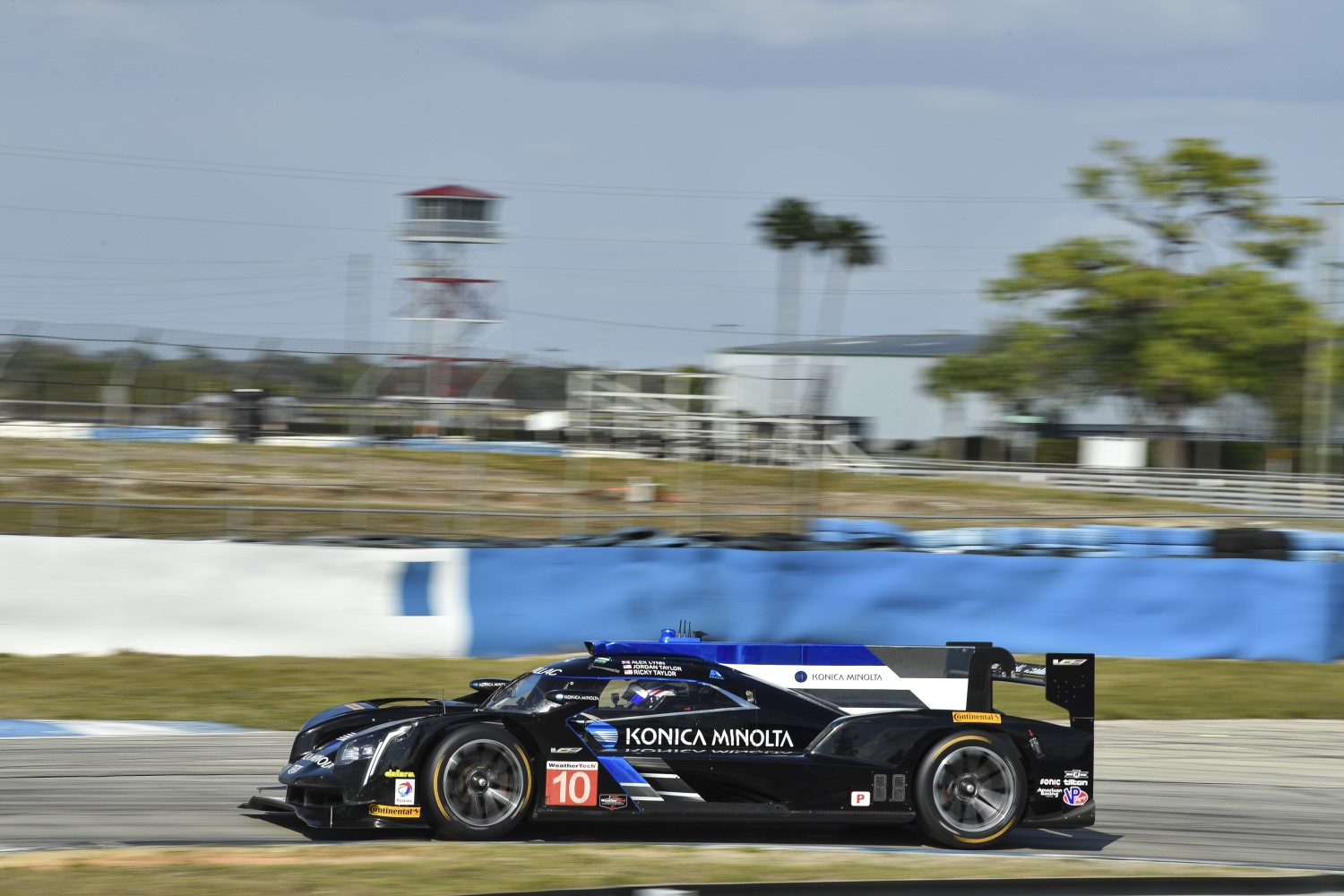 AUSTIN, Texas. – Continuing a perfect to start the IMSA WeatherTech SportsCar Championship season, brothers Jordan and Ricky Taylor continued to show the speed Friday at Circuit of The Americas that led to season-opening wins at Daytona, Sebring and Long Beach. The No. 10 Konica Minolta Cadillac DPi-V.R finished each of the day’s two practice sessions at the top of the leaderboard, with Ricky leading the first session and Jordan topping the charts in the second session with the fastest lap of the day, 1:56.595.

The No. 5 Mustang Sampling Cadillac DPi of Christian Fittipaldi and Joao Barbosa, meanwhile, was second in the two sessions. The No. 2 Tequila PatrÃ³n ESM Nissan DPi of Ryan Dalziel was third in the opening practice and the No. 85 JDC-Miller Motorsports ORECA with Stephen Simpson at the wheel finished third in the afternoon session.

While the Prototype Challenge (PC) class was not at Long Beach, the No. 38 Performance Tech ORECA FLM09 also is undefeated this season with wins at Daytona and Sebring. And like the Taylor brothers, co-drivers James French and Pato O’Ward each led a session on Friday at COTA.

The fastest lap of the day in GT Le Mans (GTLM) went to Alexander Sims in the No. 25 BMW Team RLL BMW M6, while Tristan Vautier led both sessions in GT Daytona (GTD) in the No. 75 SunEnergy1 Mercedes-AMG GT3.

In the IMSA Continental Tire SportsCar Challenge, the first practice saw McLaren and Porsche swapping the top spot in the Grand Sport (GS) class, with Matt Plumb in the No. 76 C360R McLaren GT4 posting the final fastest lap at 2:19.832. Porsches took the next four of five positions on the leaderboard and Dillon Machavern in the No. 28 RS1 Porsche Cayman GT4 MR was fastest of them all in second place.

[adinserter name="GOOGLE AD"]In the Street Tuner (ST) class, Nick Galante and Spencer Pumpelly picked up right where they left off from their Sebring victory by posting the fastest time of 2:29.369. Murillo Racing rounded out the top three with the No. 34 Mazda MX-5 of Christian Szymczak and Christopher Stone, followed by Texas residents and 2016 class winners Eric Foss and Jeff Mosing in the No. 56 Porsche Cayman.

In the afternoon practice, Guy Cosmo surprised the field by posting the fastest lap in GS at 2:19.966 in the No. 4 Team TGM Porsche Cayman GT4 MR. Team TGM is still looking to find its stride in the class this season after poor finishes at Daytona and Sebring, so a quick car at the Circuit of The Americas 120 on Saturday afternoon could be exactly what the team needs. McLaren was right on their tails though with the No. 77 C360R McLaren GT4 of Mathew Keegan and Nico Rondet in second place.

In ST, the Daytona-winning No. 73 MINI JCW Team with Derek Jones and Mat Pombo stood atop the leaderboard at 2:30.511, 81.3 mph right above the Sebring pole-winning No. 44 CRG-I Do Borrow Nissan Altima of Sarah Cattaneo and Owen Trinkler.

NEW CAMARO TURNS FIRST OFFICIAL LAPS ON THURSDAY: The highly anticipated Chevrolet Camaro GT4.R made its official debut with the IMSA Continental Tire SportsCar Challenge on Thursday. Stevenson Motorsports, which previously ran the Camaro Z/28.R in the Grand Sport (GS) class in 2014 and 2015, has enlisted veteran drivers Robin Liddell and Matt Bell to co-drive the car for the rest of the 2017 season, beginning this weekend at Circuit of The Americas (COTA).

“It’s exciting to be a part of any new program," Liddell said. “We’ve had so much success with the various Camaro platforms in the past, and this new GT4 car is the latest generation. It’s an exciting chapter in the history of the whole Camaro program. We’re really happy to be a part of that and it feels like a homecoming for the team. I know that Johnny and Susan (Stevenson, team owners) are really excited about it."

Liddell, who won the GS championship in 2015 with fellow Stevenson Motorsports driver Andrew Davis, feels that COTA is one of the best places for the new Camaro to make its debut.

“The layout of the circuit is obviously tricky," explained Liddell, who enters his 10th season with Stevenson Motorsports. “You’ve got a large combination of different corners – high speed change of direction, slow corners, heavy braking and power down – so many parts go into making a lap around here, so it’s a big compromise.

“But we had our last win with the Z/28.R here in 2015 and all but secured the championship at that point, so that was a huge win for us and a really special day for us against the competition we had. Of course, we’d like to replicate that but realistically we’ve still got some work to do and we’re looking to the future with it."

Bell agrees with his teammate and believes if any team can find quick success with a new program, it’s Stevenson.

“This team really does act like a family and I think it’s one of their strengths," said Bell, who has been with Stevenson for eight years. “I think the fact that everybody knows everyone’s personality and we know how everyone works, I think that suits them quite well to new programs better than maybe some other teams can handle. I think that’s an advantage to this team going to this brand-new car that’s relatively unproven.

“I think the fact they have so much experience with the Camaro platform in the past, they already have a head up on sorting things out. I don’t think it’s going to be very long for us to find some pace and start doing good things with this new car."

SUNENERGY1 RACING SHINES AT COTA: After the first day of practice for the Advance Auto Parts Sportscar Showdown, it’s looking like SunEnergy1 Racing’s turn in the spotlight if the pattern of recent Mercedes-AMG GT3 success continues in the GT Daytona (GTD) class.

The No. 33 Riley Motorsports-Team AMG team scored the manufacturer’s first WeatherTech Championship victory in March’s Mobil 1 Twelve Hours of Sebring Fueled by Fresh From Florida. Last time out – the BUBBA burger Sports Car Grand Prix at Long Beach – the No. 50 WeatherTech Racing team broke through with a victory.

Today at COTA, Tristan Vautier – who earned Mercedes’ first IMSA pole in March at Sebring – led both practice sessions, including a best lap posted in the morning of 2 minutes, 6.491 seconds (96.7 mph) in the No. 75 SunEnergy1 Mercedes-AMG GT3.

“It is always good to finish the day at the top of the time sheets, but it is only early in the," said Vautier, who is sharing the No. 75 machine this weekend with team owner Kenny Habul. “It is pleasing to be flying the Mercedes-AMG flag out front, but I think we can continue to improve our overall package for both qualifying and the race – which are two very different preparations at this circuit. We have set the early pace, but now we have the challenge of staying out front."

Both practice sessions featured potent Mercedes-AMG GT3s in the top-two positions, with Jeroen Bleekemolen second in the morning session driving the No. 33 Riley Motorsports-Team AMG machine and the No. 80 Lone Star Racing Mercedes shared by Dan Knox and Mike Skeen second in the afternoon. This weekend marks the WeatherTech Championship season debut for the Lone Star team, which competed last season in a Dodge Viper.

BMW TOPS GTLM TIME CHARTS AT COTA: After a struggle to find speed dating back to last season, things are starting to look up for BMW Team RLL.

The team started off 2017 with finishes in the lower half of the GT Le Mans(GTLM) rankings, experiencing a mix of mechanical and setup difficulties. The last IMSA WeatherTech SportsCar Championship race at Long Beach saw BMW leading overall and earning its highest finish of the year, with Alexander Sims and Bill Auberlen finishing fourth.

At the conclusion of today’s second WeatherTech Championship practice at Circuit of The Americas (COTA), Sims found himself sitting at the top of the timing charts. Though optimistic, Sims is keeping a focused and professional outlook on the No. 25 BMW M6’s speed.

“It’s just practice, but it’s going in the right direction it seems," said Sims. “I’m not sure what everyone else is working on running, and come qualifying there’s a chance we won’t be in this position, but the car is working quite well around here. I wouldn’t put it down to any one thing, so we’ll just keep working."

At last year’s race at COTA, Sims’ co-driver Auberlen finished fourth in class. The entire team believes they are capable of a win, but the work needs to be completed first.

“We’ll just keep our heads down and keep plugging on, try to do the same job tomorrow," said Sims. “Then we’ll see where we end up on race day, when it matters."