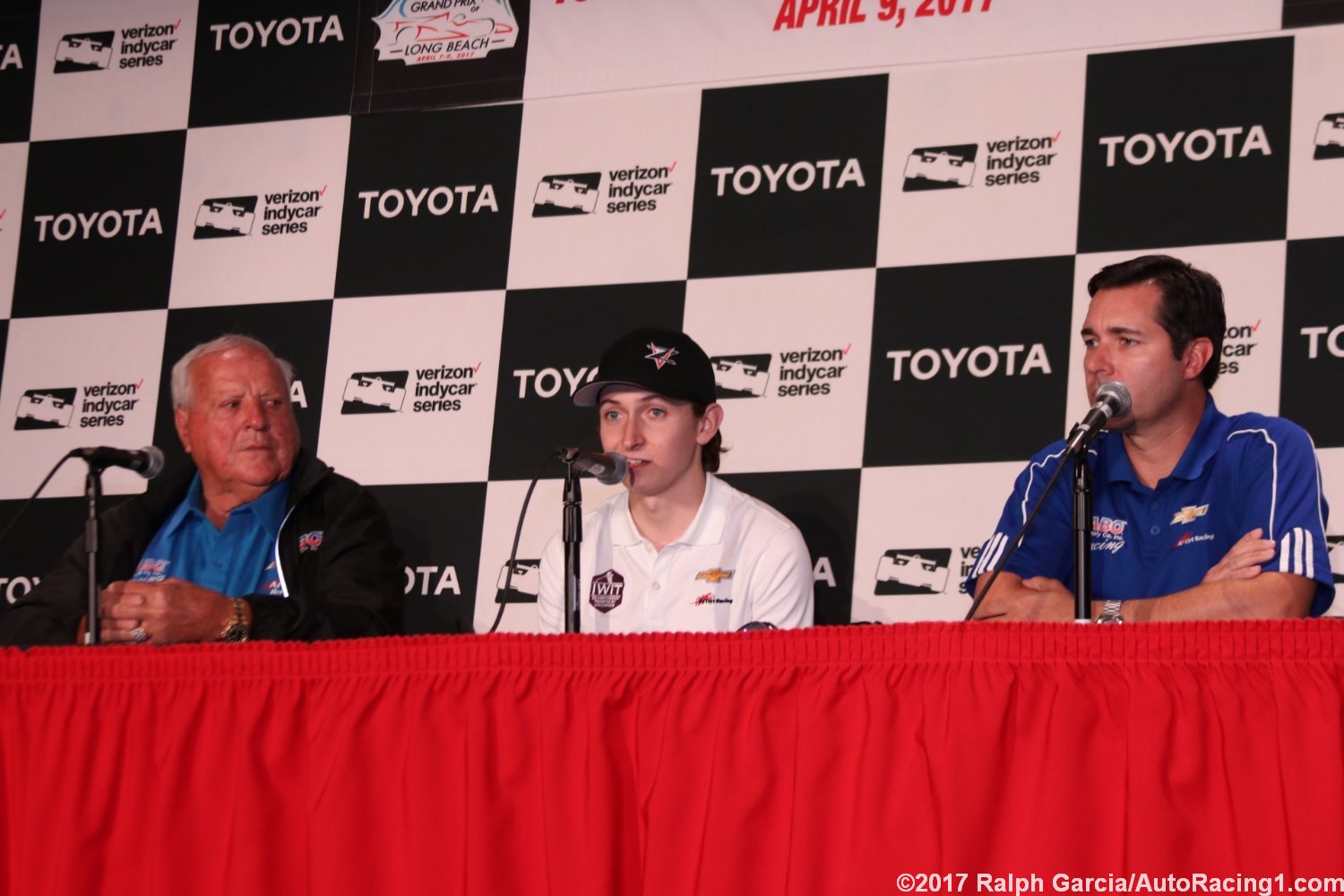 THE MODERATOR: We are joined by representatives from A.J. Foyt Racing, and as you can see, former Indy Lights driver Zach Veach for an exciting announcement.

Zach Veach has been announced to drive the No. 40 Chevrolet in this year's 101st running of the Indianapolis 500, presented by PennGrade Motor Oil. His primary sponsor will be the Indy Women in Tech Championship presented by Guggenheim, which is also the sponsor of the LPGA event that will be happening at Indianapolis Motor Speedway September 4th through the 10th.

Zach, we'll go ahead and start with you. This is obviously a goal that you've worked up to for many seasons now. To finally get this done has to be very rewarding.

ZACH VEACH: Yeah, I mean, I think for me, this is getting closer to hopefully completing an 18-year-old dream that I've had. I think as any young American driver, you always think about Indianapolis. Of course, you always relate the name A.J. Foyt with Indy. That's something you strive to be like.

To be able to say I'm going to run my first Indianapolis 500 with a team like his, it's very exciting for me. This has been a goal we've been actively working on for 10 years. This will be my 10th anniversary since I started racing.

We've had a lot of luck there in an Indy Lights car. It's going to be a big transition to get into the Verizon IndyCar Series, one I look forward to and one I think I'm ready for.

I definitely want to thank A.J. Foyt Racing, and then of course the Indy Women in Tech Championship presented by Guggenheim, because without them, none of this would be possible.

THE MODERATOR: Speaking of that luck, as you called it, I would call it success, six wins and six poles in three seasons in Indy Lights. Obviously your very illustrious career up the Mazda Road to Indy ladder.

Also joined by Larry Foyt, the president of A.J. Foyt Racing. Larry, to run three cars at the Indianapolis 500 is a task, for sure. But to have the Chevrolet power behind you this season, and to have Zach onboard, what do you feel the goals for the Indy 500 will be with those three cars?

LARRY FOYT: Well, obviously, we want to win. We feel like we've got a guy in Carlos Munoz that has shown he definitely can be there at the end of that race. Conor has some more experience now. We think he'll be tough. Zach's got a lot of experience, even in the Lights car around that track.

So for us, we know Zach's a rookie. We want to win Rookie of the Year, for sure. But we've been running three cars, and we felt like this year at first we weren't going to do it unless the right opportunity came together. When Zach became available, a great sponsor came up, we've been able to line up some good people for the crew and engineering. When that all came together, it was a no-brainer.

[adinserter name="GOOGLE AD"]THE MODERATOR: A.J., four Indianapolis 500 wins to your name. The No. 40 being chosen because it is the 40th anniversary of your fourth Indy 500 win. With Zach as a driver, what do you feel he can bring to the team this May?

A.J. FOYT: I've always been the type of owner that loved to give the young boys a break. I was young at one time, not any more, but one time. Of course, Mother Superior told me we had to put 40 on the car because it's been 40 years since I won the '77 race. That's how we come up with the number.

Larry is doing a great job on the team. I still kind of overrule him every now and then, but most of the time he calls the shots, good or bad. When he calls 'em bad, I get kind of mad (laughter).

All in all, he's doing a great job for the team. I'm having to step back more every day. Larry likes to work with young people, like I said. Reminded me it was 40 years since I won a race at Indy, so…

I wasn't supposed to be here this long, but I'm still hanging around. I think he'll do a good job for A.J. Foyt Racing. We're looking forward to having him.

Q. Larry, you have a really young lineup, three guys 25 or less. How are the young guys going to work together to help push the team forward since they're in all similar stages of their career?
LARRY FOYT: They are young. Even as young as Carlos is, being 25, he's been at the Speedway, what, four years, this will be his fifth year. He has a few races under his belt.

So it's definitely a big thing for the young guys. But I think we have enough experience around the team to really help accelerate their learning curve.

Q. Zach, not your Indy 500 debut but your IndyCar debut. Since your test last fall, this is what you've been working for. How surreal is it that your first race will be the Indy 500?
ZACH VEACH: It's going to be kind of special. I was lost for words when I first knew this was going to be coming together. We had such a strong showing in IndyCar last fall, it's made a lot of these conversations a lot easier. It still comes down to finding funding. Luckily we were able to do that in such a short period in the last couple of weeks. Very thankful for that.

To be starting things off at Indianapolis, that's the most important race in the world to me. Being from a small town in Ohio, it's always been my dream to make the name 'Veach' one of the names around Indianapolis history.

I think this is the best starting foot to be able to hopefully do that one day. I've just got to learn from everybody around me. I'm really ecstatic to have the team that I do, with A.J.'s experience, Larry's, Carlos and Conor. I worked with Carlos the first year of Indy Lights. He's what made me be able to go into Indy Lights in 2014 and almost win that title. Really looking forward to that because he is so fast at Indy. I don't have to tell you guys that he's definitely going to be one of the guys to win it in a few years.

But hopefully, you know, one of us three can charge to the front and go for a win this year 'cause Rookie of the Year is definitely on my agenda for something I want to do. But as we could see last year, it's not out of the question for a rookie to run up front and win it.

We just got to make sure we make smart decisions all month, learn as much as we can so we're prepared on race day, then go for it when the time comes.

Q. Zach, your first time in the car will be at the rookie orientation, I assume?
ZACH VEACH: That's the plan right now, yes.

Q. Larry or A.J., last year the Hondas seemed to have a little bit of an advantage at Indy. Are you looking forward to the standard body kits next year so everybody is on a level playing field?
LARRY FOYT: Well, sure, we definitely like the direction IndyCar is headed. I think the aero kits made for a lot of good conversations and some engineering exercises, but at the end of the day it probably wasn't the best way for the series to go. So we're excited about that.

I think we'll be fine. Really looking forward to just getting to Indy and getting Zach going.