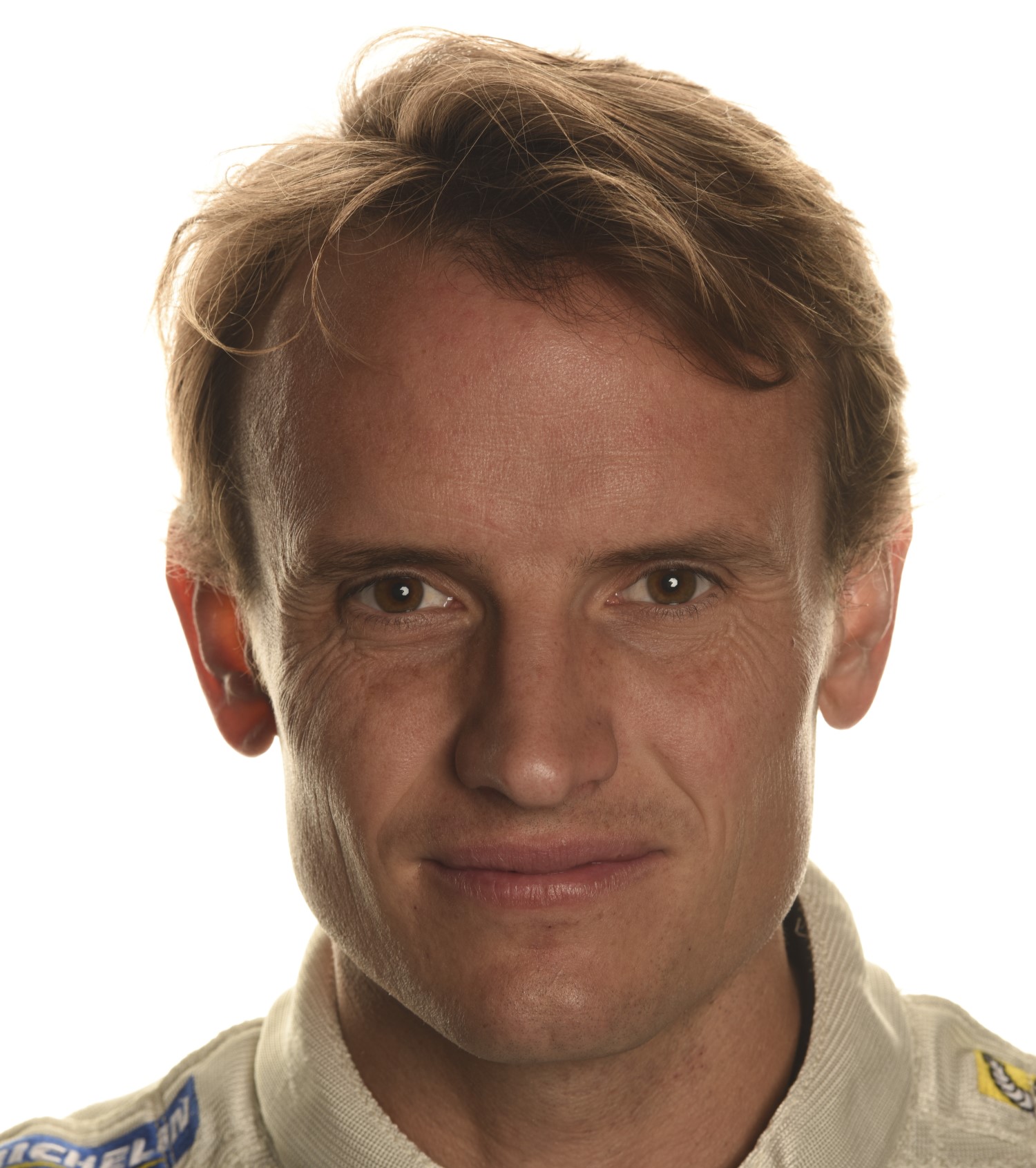 DAYTONA BEACH, Fla. — When Jan Magnussen, certainly no slouch at sports car endurance racing, called him "Superman" in a post-race interview, it's a safe bet that teammate Antonio Garcia must have put in a long day, and most of a long night, behind the wheel of the No. 3 Corvette Racing Chevrolet Corvette C7.R that Garcia drove to the checkered flag at the 65th Mobil 1 Twelve Hours of Sebring Fueled by Fresh From Florida.

"I have to give most of the credit to Antonio. That was a Superman drive," said Magnussen. "It was a lot longer in the car than any one of us would want!"

That's taking nothing away from Magnussen and Mike Rockenfeller, the German driver, DTM champion and class winner at the 24 Hours of Le Mans who helped the team out at Sebring. But Garcia's final stint of two hours and 53 minutes behind the wheel was stellar.

"If you aren't watching Antonio Garcia right now," tweeted Tommy Milner, co-driver of the defending-champion No. 4 Corvette, which fell out early with overheating issues, "you're missing out on what could be the greatest drive of his career. Unreal."

As for Garcia, the 36-year-old Spaniard looked and sounded absolutely whipped after the race.

He had climbed into the car in fifth place, behind the Risi Competizione Ferrari 488 GTE — generally considered the hardest car in the series to pass — and all three Ford GTs, including the No. 66, driven by the same trio that took a class win at the 2016 24 Hours of Le Mans and the 2017 Rolex 24 At Daytona, and was now looking to score a hat trick at the three most prestigious endurance races in the world.

Garcia passed everybody but the No. 66 on the track, and then stellar pit work got him out in front of that car, and driver Joey Hand. Afterwards it was a matter of staying out of trouble and keeping his competitors behind him, including the fast-approaching Patrick Pilet in the new mid-engine No. 911 Porsche GT Team 911 RSR. Garcia crossed the finish line 4.453 seconds ahead of the second-place No. 66 Ford GT.

"You definitely feel it," he said. "I do a lot of training — especially a lot of running, usually 50 or 60 miles a week. But a race on a track like Sebring, as rough as it is, will wear you out. The next morning, I only ran for a half an hour with Ollie Gavin [his teammate on the No. 4 Corvette] because I just felt like I needed to clean my body out." The interior of the Corvette "is very cramped," he said. "It's good to go for a slow run and stretch your body out."

Of course, winning does tend to make those muscles feel a bit less sore. "For sure," Garcia said. "If I had been running at the back, I probably would have asked my team for a driver change!"

Also different depending on how you are running, Garcia added, "is how the time goes by. When you are up front, time just flies. It went by super-fast." Except for caution periods, that is — "They can let you think too much. And if you are tired, you think about that. But you just have to stay focused."

Next up for Garcia, the Corvettes and the IMSA WeatherTech SportsCar Championship is the BUBBA burger Sports Car Grand Prix at Long Beach April 7-8, run on the extremely tight 1.968-mile street course, after two races at Daytona International Speedway (3.56 miles) and Sebring International Raceway (3.74 miles). Last year, Garcia and Magnussen finished 10th in class, while the No. 4 team Corvette finished second.

"Long Beach is very intense," Garcia said. "It's only 100 minutes long — very short, but a lot is going on. Qualifying is very important, as are pit stops — if you catch a yellow flag in the wrong spot, you can quickly go from the lead, to halfway down in the field. It's a very tricky race."

The GT Le Mans points lead is still held by Joey Hand, Dirk Mueller and Sebastien Bourdais, drivers of the No. 66 Ford GT, who lead Garcia, Magnussen and Rockenfeller by four points.

Actually, Bourdais heads to Long Beach leading two different championships. He won the season-opening Verizon IndyCar Series race at St. Petersburg the week before Sebring. He returns to his full-time job of driving the No. 18 Dale Coyne Racing IndyCar in the Toyota Grand Prix of Long Beach.

CADILLACS RULE: Just two races into the 2017 season, the new Cadillac DPi-V.R prototypes are dominating — the three Cadillacs took all three of the podium spots at Sebring, and two of the three at the Rolex 24 At Daytona, with the No. 10 Konica Minolta car winning both races.

Long Beach, though, is a different animal, especially since the No. 10 car seems to come alive late in the race. Since Long Beach is only one hour and 40 minutes long, drivers Ricky Taylor and Jordan Taylor will have to come out of the box strong.

Not that they can't do that — the No. 10 Taylor car won Long Beach last year, just ahead of the No. 5 and No. 31 Cadillac teammates.

Then, all three were Chevrolet Corvette DPs, and now all three are Cadillac DPi-V-Rs. Has anything changed? We'll find out April 8.

But don't count on it. "We're looking to be really strong at Long Beach," said Eric Curran, driver of the No. 31 Whelen Engineering Cadillac DPi-V.R.

PERFORMANCE TECH CONTINUES PERFECT SEASON WITH WIN AT HOME: It was Performance Tech Motorsports' second win of the season but first win at the Mobil 1 Twelve Hours of Sebring Fueled by Fresh from Florida at their home track, Sebring International Raceway.

The young driver lineup of James French, Patricio O'Ward and Kyle Masson started on the front row of Prototype Challenge (PC) after French qualified the No. 38 car second. Within the first hour, he passed Gustavo Yacaman for the PC lead and the team never looked back.

The Brent O'Neill-led team held the lead through all 12 hours of the race and finished a lap ahead of second place, finishing fifth overall.

"They're three just great drivers," O'Neill said. "They all could have big careers in the racing industry. It was pretty exciting for all of us and we had a great time."

"To have won the two biggest races you'd ever want to win in this series back to back is really special," said French. "It's a great way to start the championship, having pretty much all the points possible at this point. It's awesome, an amazing job by everyone on the team, especially by Pato (O'Ward) and Kyle. They're driving is way beyond their years."

A STRONG START FOR MERCEDES: The Rolex 24 At Daytona season opener saw three new manufacturers in the GT Daytona field — Mercedes-AMG, Acura and Lexus. Of the three, Mercedes-AMG has been the strongest, but that's no surprise — the Lexus and Acura cars are brand-new, while the Mercedes-AMG has been raced with success elsewhere, mostly in Europe.

The No. 33 Riley Motorsports team of Ben Keating, Jeroen Bleekemolen and Mario Farnbacher was third at Daytona, and first in GTD at Sebring, and take the points lead to Long Beach.

Those first two races "are a pretty hard act to follow," Keating said, "and we're facing pretty high expectations. But if we keep having flawless races, who knows what can happen for the rest of the season?"