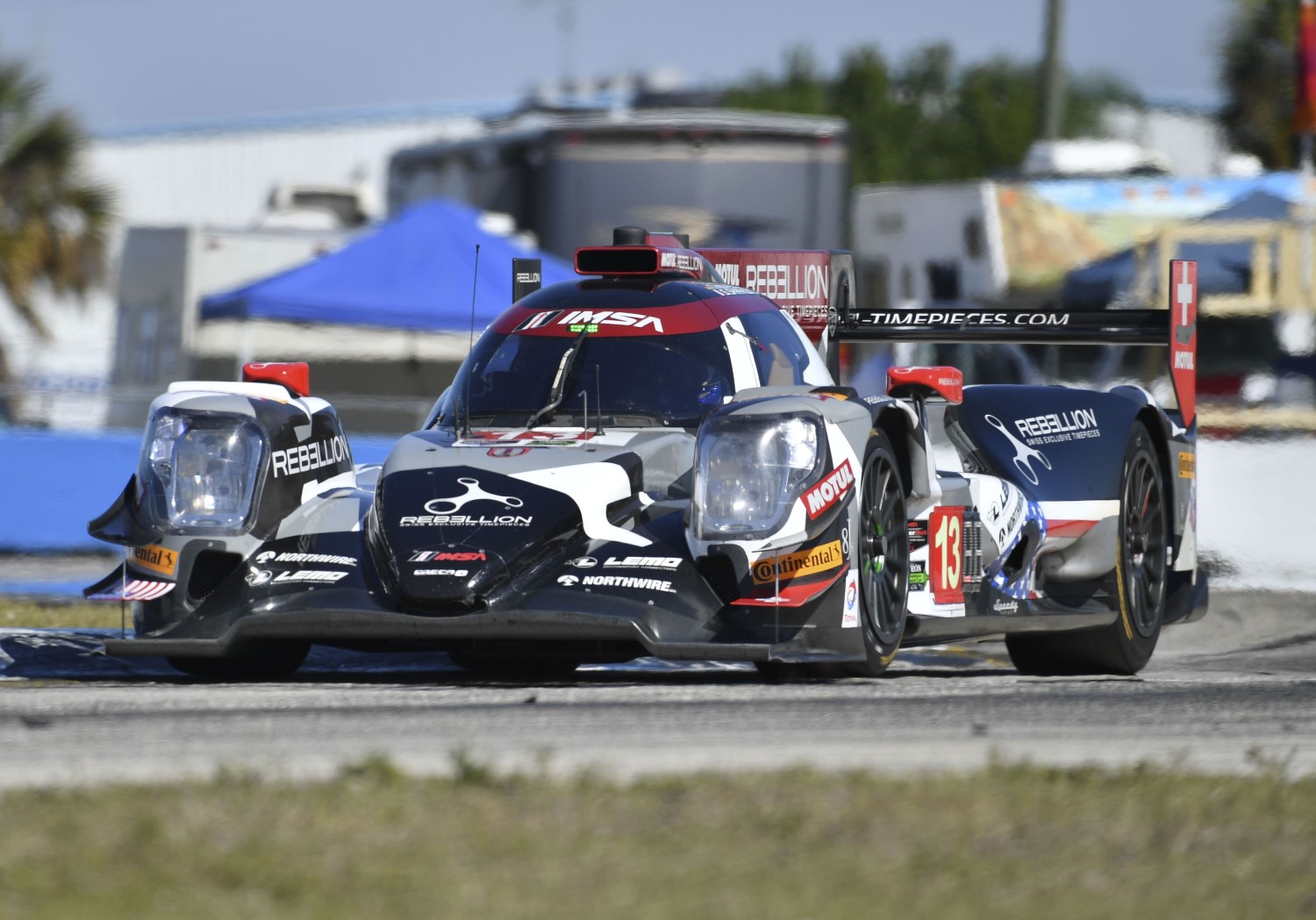 So far in this young IMSA WeatherTech SportsCar Championship season, it’s been all Cadillac. The three new Cadillac DPi cars have dominated the Prototype class, first winning the season-opening Rolex 24 at Daytona after qualifying on the pole.

When the Prototype cars arrived in Sebring, it appeared Cadillac would dominate again after posting the fastest lap in three of the four pre-qualifying practice sessions.

However, Cadillac didn’t capture the pole for tomorrow’s 65th Annual Mobil 1 Twelve Hours of Sebring Fueled by Fresh From Florida. The qualifying session on Friday afternoon saw record-breaking speeds in three of the four WeatherTech Championship classes, including Prototype, with the fastest lap of 1 minute, 48.178 seconds, set by Neel Jani, driving the No. 13 Rebellion Racing Gibson-powered ORECA P2.

The Rebellion team comes to Sebring hoping to erase the memory of Daytona, which was “a disaster," Jani said. The team started third but ended up eighth in class and 50 laps off the lead after suffering from a variety of problems.

Jani’s lap at Sebring was just slightly ahead of the fastest Cadillac, the No. 5 Mustang Sampling Racing Cadillac DPi-V.R. Driver Christian Fittipaldi’s best lap was 1:48.273, and he was followed by teammate Eric Curran in the No. 31 Whelen Engineering Cadillac DPi, with a lap of 1:48.314.

The third Cadillac, the No. 10 Konica Minolta DPi, qualified sixth. That’s the car that won at Daytona, with driver Ricky Taylor squeezing past Filipe Albuquerque in the closing stages, making a full-contact pass that caused the No. 5 to spin out in Turn 1. It will be interesting to watch when Albuquerque and Ricky Taylor are on the track at the same time on Saturday.

[adinserter name="GOOGLE AD"]Qualifying in fourth was Jose Gutierrez in the No. 52 PR1/Mathiasen Ligier P2 car, and fifth was Brendon Hartley aboard the No. 22 Tequila Patron ESM Nissan DPi. The two Mazda DPi cars, after some promising results in pre-qualifying practice sessions, ended up eighth and 10th in the 11-car Prototype field. JDC-Miller Motorsports’ ORECA, the only non-Cadillac to finish atop a practice leaderboard this week, qualified seventh with Stephen Simpson at the wheel.

Perhaps the biggest surprise was that the No. 2 Tequila Patron ESM DPi – with a driver lineup that includes Pipo Derani, the hero of last year’s Rolex 24 and Mobil 1 Twelve Hours of Sebring, as he drove that car to a win in both races last year – encountered issues in qualifying and subsequently lost all times after the team worked on the car in the pits after the qualifying session had begun, which is against IMSA rules.

“We didn’t expect it, to be honest," he said, due to some issues they’ve had with the car. Jani said Sebring’s unique character – mostly defined by the bumpiest, most abrasive surface on the WeatherTech Championship schedule – means that a driver has to “improvise every lap. There is no ideal lap at Sebring. It’s too bumpy."

Clearly, Jani improvised Rebellion’s way onto the pole, but there may be no track where qualifying is less important than at the historic, 3.74-mile, 17-turn track. All that matters is the last lap.

And that’s clearly at the top of the mind of Gustavo Yacaman, who was the fastest qualifier in the Prototype Challenge (PC) class, which is running its last race at Sebring as the class is being retired at the end of the season. That has resulted in a smaller field, but there are four PC cars at Sebring that qualified closely and should put on their own show.

Yacaman, driving the No. 26 BAR1 Motorsports Chevrolet-powered ORECA, had a best lap of 1:53.506, edging out the No. 38 Performance Tech Motorsports car qualified by James French, whose best lap was 1:53.575. The No. 38 car won the Rolex 24 by 22 laps, and Yacaman and the BAR1 team know they have their work cut out for them.

“We’re just going to try to stay out of trouble," he said. Sebring is “one of the toughest races, especially at night. It’s pitch black out there." This race, he said. “is a lot harder to win than Daytona."

Neel Jani – #13 REBELLION Racing Oreca 07 : "It was a good Qualifying session, we didn’t expected to be P1. We had a few issues in free practice and we had to play a lot of catch up. There is no ideal lap here at Sebring, you have to improvise as it’s so bumpy, it’s always a nice and challenging track. We saw in Daytona that we were close in qualifying, but in the race the Cadillacs were really fast. I think that tomorrow it will be an other game to translate this Pole into a win. For sure we will try to stay at the front as long as possible !"

BAR1 will start first and third on the Prototype Challenge class grid in tomorrow’s 65th running of the Mobil 1 12 Hours of Sebring Fueled by Fresh From Florida. Gustavo Yucaman has been quick all week and today was no exception. He put the No. 26 Southwest Realty Advisors / Merchant Services car on the pole with a 1:53.056. Gustavo will share the car with Marc Drumwright, Chapman Ducote and Colin Thompson.

The No. 20 Gas Monkey Energy / Southwest Funding car will start third on the grid in the hands of Buddy Rice, Don Yount, Daniel Burkett and Mark Kvamme.

"Gustavo was definitely hitting his marks," said team owner, Brian Alder. “He’s been fast all week. I think we’ve got a good line up for tomorrow’s race. All the drivers are on the pace and the cars are fast. The crew guys have done a great job getting us here."

One of Ganassi’s Ford GTs, won its class at the 2016 24 Hours of Le Mans on the 50th anniversary of the original Ford GT’s overall victory there. The same car, wearing its familiar No. 66 in WeatherTech Championship competition rather than the No. 68 it sported at Le Mans, also won the 2017 Rolex 24 At Daytona with the same driver lineup – regulars Joey Hand and Dirk Mueller, helped on the longer races by IndyCar driver Sebastien Bourdais.

While that winning driver lineup returns at Sebring, it was the No. 67 Ford GT driven by Ryan Briscoe, that won the GTLM pole with a lap of 1 minute, 55.939 seconds. Both GT Le Mans and GT Daytona set records for qualifying times at Sebring.

Briscoe was just a little quicker than teammate Mueller in the No. 66 – Mueller’s best lap was 1:56.175. The third Ford GT, the No. 68, qualified by Stefan Mucke, was less than a half-second off Briscoe’s pace, but that put him back in fifth. Ford Chip Ganassi Racing brought four Ford GTs to Le Mans and Daytona, but there are only three at Sebring.

“The track was so fast in qualifying," Briscoe said. “I don’t think anyone was expecting those lap times." Briscoe – who shares the car with Richard Westbrook and, for longer races like Sebring, IndyCar champ Scott Dixon – said Sebring is one of his favorite races. “I love the challenges that come with it." The key to winning? “You have to keep your nose clean."

Qualifying third, with a lap time of 1:56.252, was the No. 4 Corvette Racing C7.R driven by Tommy Milner. But the car was found to have an illegal ride height in post-qualifying inspection, and will have to start last in the GT category behind all GTLM and GT Daytona (GTD) cars. That elevates the fourth-fastest car, the No. 912 Porsche 911 RSR qualified by Kevin Estre at 1:56.319, to third. Surprisingly uncompetitive was the No. 62 Risi Competizione Ferrari 488 qualified by Giancarlo Fisichella with the best lap of 1:57.175, the slowest in the field.

As in the GTLM class, the top qualifiers in GTD also set a Sebring record. The polesitter may be a surprise: Tristan Vautier, the former IndyCar driver, set a fast lap of 1:59.738 and was the only GTD car to qualify under two minutes. A bigger surprise: Vautier drives the No. 75 SunEnergy1 Racing Mercedes-AMG GT3, a brand-new team headed by owner and co-driver Kenny Habul, teamed with veteran racer Boris Said.

The team’s debut at the Rolex 24 At Daytona resulted in a finish of 18th in class, so this pole has to be a shot in the arm for the SunEnergy1 team.

Vautier was very pleased with his qualifying performance, but he knows the SunEnergy1 Racing team will need some luck to turn the front-row start into a GTD class win.

“Pit stops could be a challenge," he said, “because our team is less experienced than some. It’s all about execution, and not making mistakes, and be there for the last two hours."

“We made a big step forward for today, so that was good," Mucke said. “We missed the testing sessions earlier this year, so I think we’ve made good progress for the short time we have. P6 isn’t ideal. We worked mainly on balance for the race and we’re looking forward to the race now.

"It’s a 12-hour race, so our main focus really wasn’t just to get a good car for qualifying, but to make the car good to drive for the 12 hours. Also, the spread of temperature will be quite high, quite hot in the daytime and quite cold in the nighttime, so we tried to make a setup which will be good for the end of the race. I hope that will be the case."