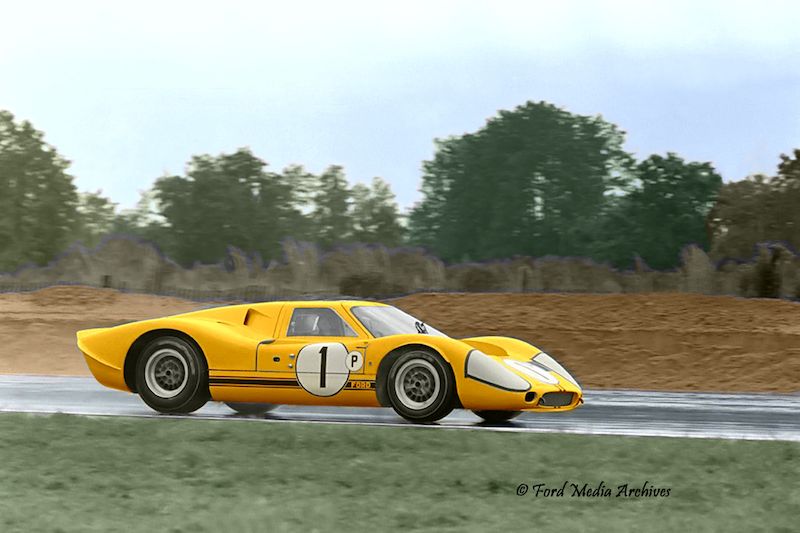 C.J. Wilson, the just-retired Major League Baseball pitcher, was prohibited by his contracts to participate in any serious auto racing, but it didn’t prevent him from investing in car dealerships and owning some race teams. Two of those teams, under the team name CJ Wilson Racing, finished second and third in the Continental Tire SportsCar Championship season opener at Daytona International Speedway, a four-hour endurance race.

But now that he has hung up his glove, the restrictions are off. The 36-year-old left-hander, a former All-Star who pitched in the 2006 and 2011 World Series, has traded the baseball for a racing helmet and he is going professional auto racing starting – well, right now.

In a promotional video for Porsche, Wilson once said: “The ultimate goal of any endurance racer is to go to France and win the 24 Hours of Le Mans. Why would my goal be any different?"

Wilson took that first step toward Le Mans late Thursday afternoon, at the wheel of the No. 33 CJ Wilson Racing entry, a 2017 Porsche 991, racing in the IMSA Porsche GT3 Cup Challenge USA by Yokohama. The cars in Wilson’s class, which is the fastest one, are all identically-prepared Porsches, meaning your performance depends on how good your crew is, and how good your driver is.

Wilson’s crew is excellent, but he admits he has some work to do.

“I knew the race was going to be a mess. I qualified bad – I’m not on good terms with the car or the track yet," he said. “My only goal was to get through the race and not crash the car. I really didn’t have any expectations beyond that."

He did a little better than that: He finished 20th overall. Of course, some of the cars were in a different class – “Gold," as opposed to “Platinum," which Wilson was racing in – and the Gold Porsches are a year or two older, but not necessarily much slower. Bottom line: Wilson, in his first time out, was lapping the 3.74-mile track about five seconds later than the guys at the front, some of which do this for a living.

So, adrenalin-wise, is there any comparison between taking the green flag here, and stepping onto the mound in a pro baseball game?

“No," Wilson said. “It’s totally different. When I have the ball in my hand, I throw whenever I want. But when they throw the green flag – I wasn’t really ready for it."

Wilson races again on Friday, same car, same class, at 11:55 a.m. ET. He said he wants to make some changes in the car’s setup, and go easier on the tires, which start to give up on Sebring’s abrasive pavement when they get hot.

“You have to give the tires a chance to breathe a little," he said. “If you push too hard and overcook them, you have to slow down, or they just get worse."

At least he was able to drive the car back to his garage – a lot of his competitors were towed back after crashes.

“I guess I’m just a little more budget-conscious than they are," said the man who signed a $77.5 million deal in 2011 with the Los Angeles Angels.

Indeed, the aggressive racing in the Porsche GT3 Cup Challenge seemed to come as a bit of a surprise to Wilson, who apparently is a “Seinfeld" fan. He was surprised at how “little regard guys have for your personal space. There are a lot of close talkers on the grid."

And if you’re not a “Seinfeld fan: “Google “close talkers."

Said Mario: “We tested only briefly, and it was the first race for the Mk IV. The car was competitive right from the start because we had very good mechanical knowledge and they had used much of the chassis of the Mk II, with some mods, but with a new aerodynamic shape it proved to be quite good. With Bruce McLaren, we just pulled it off. It was a hard-fought race. The Chaparral was the favorite, but we were competitive.

“That yellow No. 1 Mk IV is now on display at Barber Motorsports Park in Alabama. Sebring was actually very important from the standpoint of Ford’s effort for the Le Mans 24. At Daytona earlier that year, we had some issues and Ford felt they needed to come up with a different model car, a little slicker and quicker in a straight line, especially for Le Mans, and Phil Remington was given the task of designing that car quickly. He did it and that car won Sebring and Le Mans."

Dirk Mueller is the co-driver of the No. 66 Ford GT, partnered with Joey Hand for the entire IMSA WeatherTech SportsCar Championship season, and with Sebastien Bourdais, fresh from his win last weekend in the season-opening IndyCar race at the Grand Prix of St. Petersburg, spoke about what it would mean to win Sebring:

“It would mean a hell of a lot, to be honest," said Mueller. “Just winning Le Mans last year was huge. I mean, it was unbelievable. We had pressure there because of the 50-year anniversary. It was the first time for the team and generally the first year of the whole program, and it ran so well.

“Chip always says he likes winners, and that’s what we like to achieve. If you see all the trophies at Chip Ganassi’s workshop, you know why they are there. They want to win races; we want to win races and that’s why we are here. That’s why we are looking forward to fighting for the Twelve Hours of Sebring. But we know how tough the competition is. It’s not just like, ‘Hey, we’re going to win it!’ We have to earn it and it starts today. It started when we had the official test here a few weeks ago, and here we are. We really want to have the triple."

A FASTER MERCEDES? Cooper MacNeil, co-driver of the No. 50 WeatherTech Racing Mercedes-AMG GT3, has spent most of his career in Porsches, but the team switched to the new Mercedes-AMG for 2017. The team is hoping for a better outing at Sebring than the their 21st-place class result at the Rolex 24 At Daytona.

“Our new Mercedes-AMG GT3 will be strong at Sebring and I'm looking forward to taking the green flag on Saturday morning," MacNeil said. “We had an extremely positive test here a few weeks ago and made strong improvements to the car. We were down a bit on top speed at Daytona and at the Sebring test, which was a bit frustrating, but with the latest BoP [Balance of Performance] change we were given a little larger air inlet. This will help our top speed, which is exactly what we needed."

MUSTANG VS. CAYMAN? The Continental Tires SportsCar Challenge race on Friday is shaping up to be a battle between the Porsche Cayman GT4, which took the top four spots at the season opener at Daytona, and the two Ford Mustangs, both fielded by KohR Motorsports. Dean Martin, co-driving the No. 59 car with Jack Roush, Jr., was fastest in the morning test session for the Visit Sebring 120.

Success, according to Martin, may well have to do with tire management.

“On old tires, [the car] feels terrible, and that’s where we were in the early session," Martin said. “We were dead last, we were the slowest car on the track. I came in to the pits towards the end, and on my out-lap, I spun the car. brought it back in and said to the guys that the car was just terrible – let’s put tires on it and figure it out.

“So, we put a fresh set of Continentals on it, and let the tires come up to temperature pretty gradually. I went for a flier, had a good clean lap, and then the car felt great. New tires do that, they tend to mask the negatives, but they felt fantastic. We’re still working on our long-run strategy because the car seems to fall off. We’re just trying to make our set-up match our Continentals."

The Visit Sebring 120 takes the green flag Friday at 3:40 p.m. ET. It will stream live on IMSA platforms. The 65th Mobil 1 Twelve Hours of Sebring Fueled by Fresh From Florida gets underway at 10:40 a.m. ET on Saturday.

Live coverage begins at 10:30 a.m. on FOX Sports GO, with television coverage on FS1 beginning at 12:30 p.m. Coverage from both platforms will continue uninterrupted through 11 p.m., including post-race interviews. A live international broadcast stream available on IMSA.tv and the IMSA mobile app.