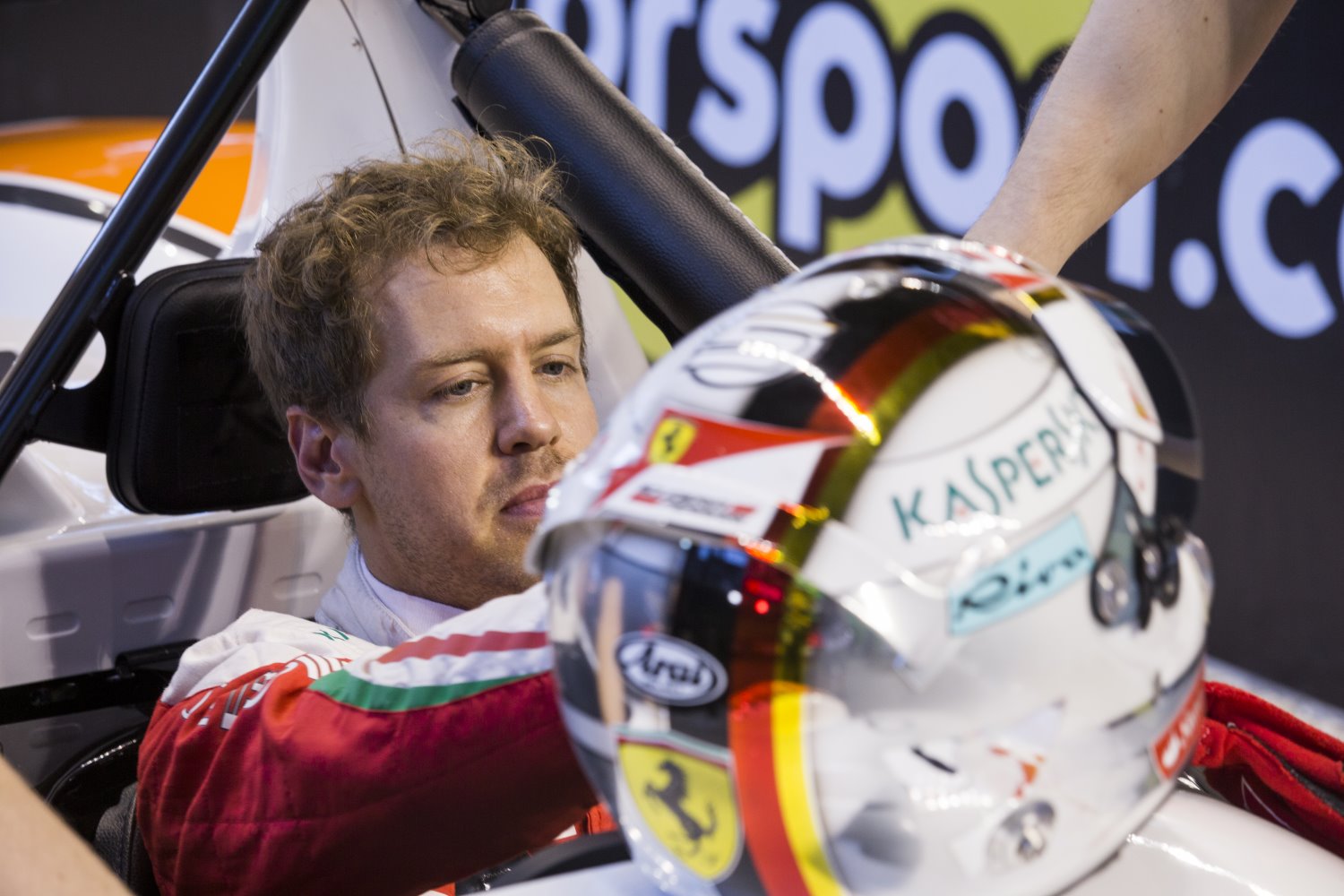 Team Germany are celebrating a record seventh win in the ROC Nations Cup after Sebastian Vettel took a stunning victory all by himself at Miami’s Marlins Park.

On a warm afternoon in Miami, legends from the world’s biggest motor sport series initially teamed up in pairs to battle for national and regional pride. They raced a mix of cars on a brand new figure-of-eight style track, providing a feast of action for the race fans in the grandstands and watching around the world on television.

Vettel represented Team Germany by himself due to Pascal Wehrlein’s withdrawal from today’s action following his accident yesterday. This was a similar situation to the ROC Nations Cup in Paris in 2006 when Travis Pastrana had to represent Team USA on his own. On that occasion Jimmie Johnson injured his wrist just three days before the event, then his replacement Scott Speed was injured in F1 testing at Spain's Jerez circuit the day before the race.

In the end Vettel went through the entire day’s action unbeaten, but he had to see off the might of Team USA NASCAR’s team of Kyle and Kurt Busch in the final. The two American brothers had a fantastic afternoon’s work too, winning a series of tight battles on the unique track twisting around Marlins Park but they couldn’t match the German.

Vettel said: “The Race Of Champions is a great competition, but yesterday I went out very early. So I wanted to make sure I didn’t leave the States empty-handed. I started on the wrong foot but it helped me to take it a bit more seriously. Today I just wanted to get some more time on the track. I found the rhythm straightaway and it felt pretty good. Unlike yesterday, I got along with all the cars today. But that’s the way it goes: sometimes you wake up and it works, sometimes it doesn’t. It obviously worked out well but of course it would have been nicer to share this victory with Pascal."

Kurt Busch added: “This was a fantastic day and I’ve thoroughly enjoyed it from the beginning to the end. As the NASCAR team we definitely wanted to advance out of our group ahead of the IndyCar guys and Rally X guys. So to win some rounds and advance was great. When you get into that rhythm, that’s when you start to feel the flow of ROC. It was a tremendous pleasure and an honour to go out there and race for the United States along with my little brother Kyle. It was a great atmosphere so thank you to Fredrik Johnsson and the ROC team."

Kyle Busch said: “This was a great treat. I had a super time, it was a lot of fun. To be teamed up with Kurt and beat some of these guys from around the world in different cars was very exciting for me. I got beaten up by Vettel and Coulthard – I guess those are two pretty good guys to lose to – but I think I beat everyone else I was up against. I had a lot of fun and I enjoyed the experience. So I’d love to be invited back and go to another Race Of Champions somewhere."

The other semi-final was a closer affair. Team USA NASCAR’s Kurt Busch and Team USA IndyCar’s Alexander Rossi had to have a third heat tie-break after they won one heat apiece. In the end it was Kurt who prevailed, sending Rossi and his fellow Indy 500 winner Ryan Hunter-Reay home.

On a night of match-ups between huge stars of world motor sport, many superstars fell by the wayside – and a host of champions were knocked out in the group stages.

Group A began in style as ROC Factor Canada’s James Hinchcliffe beat Kurt Busch by just two thousandths of a second. It was a pattern of exciting racing that would continue throughout. Team USA Rally X’s Travis Pastrana couldn’t repeat his heroic unbeaten group performance from yesterday and he and Scott Speed went out.

There was a stunning performance from ROC Factor Canada’s Stefan Rzadzinski, who won two of his three heats, defeating both Speed and reigning Indianapolis 500 winner Alexander Rossi. But it wasn’t enough to keep his team in the tournament as Team USA IndyCar and Team USA NASCAR went through with four wins each.
Vettel won the battle of the Formula 1 world champions in the first race in Group B, seeing off Team GB’s Jenson Button. David Coulthard later took one win but it wasn’t enough to save the British duo from elimination. The German kept up the wins to see of the challenge of Team Nordic’s Petter Solberg and Tom Kristensen – despite the Dane’s strong run to the individual Race Of Champions Grand Final yesterday.

Group C also had a stunning start as Helio Castroneves beat Team Brazil’s Tony Kanaan by just three thousandths of a second in the first heat. Helio’s ROC Factor Latin America team-mate Gabriel Glusman wasn’t so lucky, going into the barriers as he battled Felipe Massa. In the end all three teams ended up on two wins each but it was Team Colombia who progressed to the semi-finals on countback of fastest laps.

After the ROC Nations Cup finished it was time to raise the national pride stakes even further with the all-new Ryder Cup-style America vs The World. This time the six USA drivers took on all the other drivers in a head-to-head shootout, in a race to collect the magic eight points.

The scores were tied at 3-3 after the first round of races, with American wins for Kyle and Kurt Busch plus Alexander Rossi. The World responded with wins for Juan Pablo Montoya, Tom Kristensen and Felipe Massa.

There were double points on offer in the second round, when Scott Speed sent the home fans wild by defeating Helio Castroneves. The newly-crowned ROC Nations Cup winner Sebastian Vettel responded by beating Travis Pastrana before Kyle Busch took America to a 7-5 lead by defeating Jenson Button.

In the end it boiled down to a single winner-takes-all heat between Global Rallycross Champion Scott Speed and World Rallycross Chamion Petter Solberg in the RX Supercar Lite. Solberg prevailed to seal an 8-7 win for The World.

Solberg said: “It was a bit of pressure. But when Scott came up to me he said he was going to beat me. So I thought, okay you can try! I was focused so I went properly flat out, rally style, and it worked really well. I was very happy when I did it. These circuit drivers are so neat so it’s a different driving style, but I’m working on it… But coming from cold Norway here to Miami is great – and to drive in a baseball stadium has been fantastic. It was a great atmosphere. The ROC guys rocked again."

Together with the ROC drivers and Racing For Cancer, the Race Of Champions is running a charity auction. Unique items include the ROC Art Car painted by Miami artist Alex Mijares and raced by drivers including Juan Pablo Montoya and Tony Kanaan. There is also a limited edition ROC Watch by Louis Moinet (1 of only 29 pieces made) plus racing gear including overalls, gloves and shoes – all worn and autographed by the Race Of Champions drivers.

The Race Of Champions has joined forces with AutoNation and Racing For Cancer to help drive out cancer. To make a $10 donation please text ‘RFC’ to 20222. This is on behalf of all participating race drivers. All proceeds will go to the new Pediatric Cancer Care Unit at Nicklaus Children’s Hospital in Miami.

Today’s action at Miami’s Marlins Park in front of 13,500 fans marks the end of the Race Of Champions. We hope you enjoyed this annual festival of motor sport and entertainment and we look forward to seeing you back for the next ROC event. Keep up with all the latest news throughout the year at www.raceofchampions.com, Race Of Champions on Facebook and @raceofchampions on Twitter.