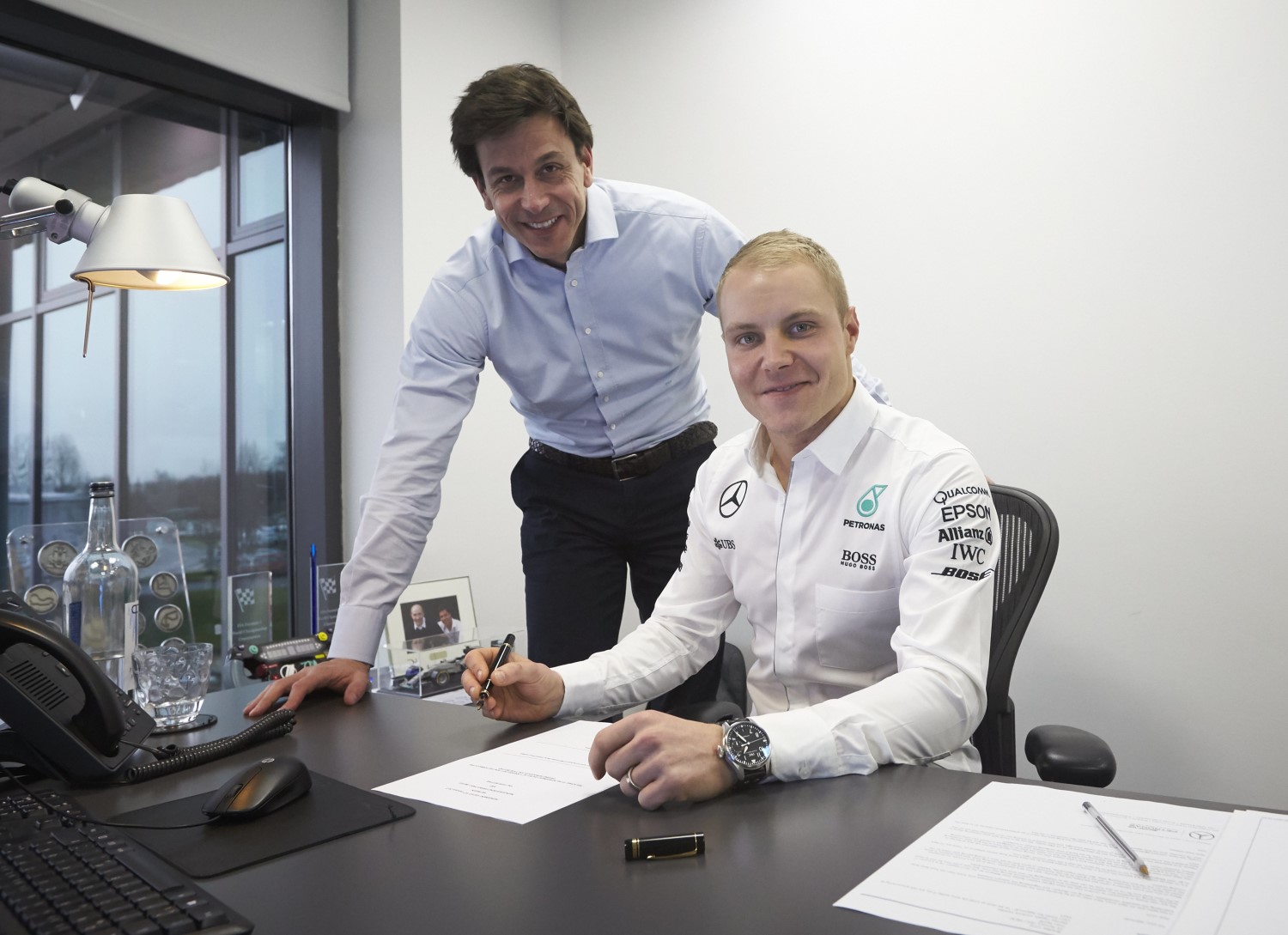 It's been 45 days since Nico Rosberg dropped the bombshell of his immediate retirement from Formula One. And it left the team with a conundrum: how to best fill the vacant seat alongside three-time champion Lewis Hamilton in order to defend the Constructors' Championship?

Following six weeks of detailed evaluation, deliberation and negotiation, the answer can now be confirmed officially: we signed Valtteri Bottas this morning. The 27-year-old native of Nastola, Finland has completed four seasons in Formula One with Williams, making 77 starts and scoring 9 career podiums so far.

"Sometimes in life, unexpected circumstances provide interesting opportunities. Nico's decision in December was a big surprise – certainly a challenging situation for the team to handle. But weathering the storm makes you more resilient and we see this as another opportunity for the team to grow," explained Toto Wolff as he introduced the fourth driver to race for the Silver Arrows in the modern era.

"Valtteri is a no-nonsense guy: down to earth, straightforward and very focused. Pretty Finnish, to be honest, and a great fit for us. He has an impressive track record in the junior categories and nine podiums in F1. But now it's time for the next level, to see how he can step up to challenge for race wins and for Championships. We know that we are already behind the curve in terms of preparations for the new season, so we've got a busy program to get him integrated into the team. One thing is for sure: as I know Valtteri, he will give it everything."

[adinserter name="GOOGLE AD"]Valtteri was cautiously optimistic when he met his new team-mates in the factory today. "It's very exciting times for me," he grinned. "I think it's going to take a while to understand that this is really happening. It's definitely another dream come true, to race in another team with such great history – especially in the recent years, which have been so impressive. I'm really proud to become a part of that and grateful to everyone at Mercedes for trusting my skills and giving me this opportunity.

"I've had a really warm welcome so far. Of course, I have a lot more people to meet and new faces to remember. But initially everything has felt very good. I'm really impressed with the facilities and I'm looking forward to getting to know everyone better. My first experience with Mercedes power was in F3 back in 2009 and, of course, I know the Power Unit well from the last three years with Williams. But there are a lot of new things to learn with the car and also with how the team operates at the factory, in testing and at the races."

The scale of the challenge ahead cannot be underestimated. New aerodynamic regulations mean a reset for the entire field and there is genuine uncertainty about which team will emerge on top; Valtteri is paired with probably the most ferociously fast team-mate in the sport, Lewis Hamilton; and there are just 70 days until the red lights go out at the start of the Australian Grand Prix in Melbourne.

"We have confidence in Valtteri's ability and it's one of the reasons that he is the driver we set our sights on this winter," continued Toto. "The next weeks will be busy as we work to build relationships so Valtteri understands the team and the car. But that's an exciting challenge that will bring us fresh energy and a new dynamic between the drivers. And, of course, we're working hard to give Lewis and Valtteri the car they need to do the job."

Valtteri is under no illusions about the task ahead: "I'm ready to work hard, to prove myself to the team and to prove my skills. It's going to be a challenging season and joining a new team makes it more work than normal. But I'm 100% ready for that. I'm training hard to be at my physical best because it will be much tougher with these new cars. I always set the bar really high, so my target is to perform from the first race. I'm full of energy and ready to get to work for this year and hopefully many more to come with Mercedes."

The agreement for Valtteri to join Mercedes has not happened in isolation. With today's announcements that Pascal Wehrlein will join Sauber for 2017, and that Felipe Massa will return to Williams, the final pieces of the puzzle have fallen into place for this year. And that has only been possible thanks to positive working relationships between all the teams involved in a complex chain of negotiations.

"On behalf of Mercedes, I must thank Williams for their cooperation in allowing Valtteri to make this move – and also Monisha and Sauber for their patience during the past weeks," concluded Toto. "It's been a busy day in the driver market and I am pleased to know that Pascal will be racing at Sauber to continue his development in F1. He had a good first season with Manor and we feel this is the right path for him in the sport. It's satisfying to have both of our Young Drivers taking on new challenges in F1 this year, with Esteban also racing at Force India. We'll be following their progress closely; I'm sure we've got an exciting season ahead of us."

From Valtteri, too, there were warm words for his friends and colleagues at Williams: "I had a great seven years there, starting as a test driver in 2010. I'm very proud of what we achieved together and I leave with some very good memories. My debut in F1, my first points and nine podiums all came with the guys and girls at Grove, so I must say a big thanks to everyone and I wish them all the very best for the future."

As Valtteri now begins a busy week of technical and physical preparations for the new season, Mercedes-AMG Petronas Motorsport is pleased to confirm that Nico has accepted an ambassadorial role with the team for 2017.

His first commitment will be tomorrow, in Geneva, alongside former team-mate Lewis Hamilton at the Salon International de la Haute Horlogerie (SIHH) on behalf of team partner IWC Schaffhausen.

Valtteri Bottas was born on 28th August 1989 in Nastola, Finland. He was entered for his very first kart race at the age of six. Over the ensuing decade, the karting circuits of Finland and Europe would become his home from home. He won numerous races and Championships and was a member of the Finnish national karting squad for seven years.

In 2009, as a member of the ART Grand Prix squad, Valtteri graduated to the Formula 3 Euro Series, driving a Mercedes-powered car for the first time in his career. The Finn adapted to the new format very successfully, finishing the 2009 and 2010 seasons in third place. In both years, he won the prestigious Formula 3 Masters in Zandvoort; he is still the only driver to win this event twice in succession. Other well-known winners of the F3 Masters with the three-pointed star are Lewis Hamilton (2005), Paul Di Resta (2006), Nico HÃ¼lkenberg (2007) and Jules Bianchi (2008), all of whom went on to compete in Formula One

In the following year (2011), Valtteri switched to the new GP3 Series, which was then in its second season as a support event to Formula One. This put Valtteri in the shop window for F1 teams and also gave him the chance to accumulate preliminary experience of Grand Prix circuits. He acquitted himself well, securing four victories on the last four weekends of the season to beat his team-mate James Calado to the GP3 title.

Valtteri was given his first Formula One test outing by Williams in 2010 and continued in this role in 2011 alongside his GP3 commitments. For the 2012 season, he decided to concentrate solely on his duties as a Formula One test driver and not to compete in any more races. In this capacity, he took a Williams car out in the first free practice session on 15 of the 20 Grand Prix weekends that year, thereby acquiring valuable experience of the top tier of motor racing. In November 2012, he at last received the long-awaited call from his management team: “Your time has come."

Valtteri made his Formula One debut at Albert Park, Melbourne, in the 2013 Australian Grand Prix, thereby becoming the ninth driver from his country to compete at this level. His debut season turned out to be a difficult one – but he at least outscored his team-mate Pastor Maldonado by four points to one. Valtteri’s moment of glory came in qualifying for the Canadian Grand Prix when, on a drying track, he gave a virtuoso performance to claim P3 on the grid. In the race itself, though, he stood no chance against the opposition on a dry track. He therefore had to wait until the penultimate race of the season before scoring his maiden World Championship points for an eighth-place finish in the United States Grand Prix.

The era of the Hybrid Power Units in Formula One began in 2014. After a change of engine supplier at Williams, Valtteri was back in a Mercedes-powered vehicle for the first time since his spell in Formula 3. He registered his best season so far in the highest echelon of the sport, making six podium appearances and scoring 186 championship points to finish the campaign in fourth position, behind the Silver Arrows duo of Lewis Hamilton and Nico Rosberg and three-time race winner Daniel Ricciardo. That year, Valtteri and his team-mate Felipe Massa secured third place for Williams in the Constructors’ Championship. His best results were two runner-up spots in the British and German Grands Prix.

In the 2015 season, Valtteri once again outscored his team-mate Felipe Massa, despite missing out on the start of the season due to a back injury. He made two podium appearances and finished the year with 136 points. In the 2016 season, his fourth in Formula One, Valtteri secured his team’s sole podium finish, which came in the Canadian Grand Prix. He again came out on top in the internal contest against team-mate Felipe Massa by a score of 85 to 53 points

For the 2017 season, Valtteri becomes the 11th driver to compete in Formula One with the Silver Arrows, following in the footsteps of the great Juan Manuel Fangio, Sir Stirling Moss, Michael Schumacher, Lewis Hamilton and Nico Rosberg.