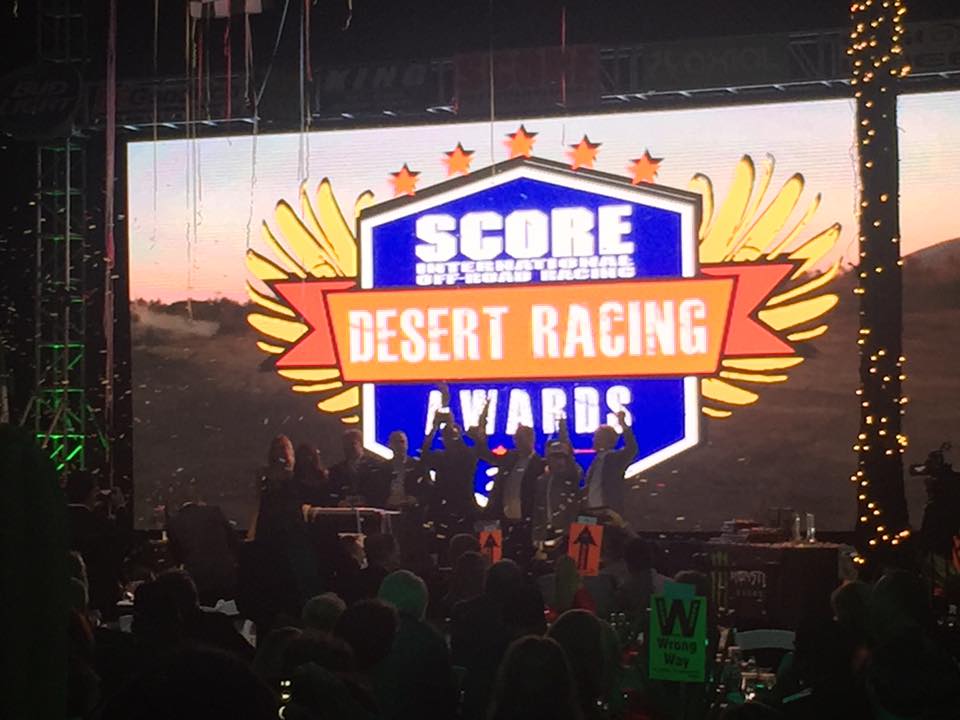 SCORE Off-Roadsman of the Year awards were presented in 14 categories along with the 31 winners of the Red Kap SCORE Milestone Awards as well as the overall and class point champions of the four-race 2016 SCORE World Desert Championship. Also honored for the first time were the nine winners of the SCORE Triple Crown of Baja, presented by BFGoodrich Tires.

In front of an enthusiastic crowd of over 400, the evening was also a celebration of 43 years of SCORE championship desert racing. Following the lengthy salute to the stars of the 2016 SCORE World Desert Championship, SCORE owner Roger Norman summarized his fourth year as SCORE's CEO and President.

“We want to sincerely acknowledge the support, assistance and sacrifices made by family members, friends and sponsors–because without their support, the accomplishments of our racers in the series would not have been possible," commented Norman. “Becoming a SCORE overall or class point champion, winning a coveted SCORE Off-Roadsman Award, SCORE Milestone Award or the SCORE Triple Crown of Baja is an achievement of the highest degree in our beloved sport."

SCORE PERSON OF THE YEAR

Helping SCORE celebrate the 50th anniversary of the iconic SCORE Baja 1000 in November, BFGoodrich Tires Director of Motorsports Chris Baker announced a special contingency prize of $50,000 to a BFGoodrich Tires driver that has the fastest overall time in the race. BFGoodrich Tires has been the choice of 28 over the 49 overall winners of the legendary Granddaddy of all Desert Races.

SCORE OFF-ROADSMAN OF THE YEAR AWARDS

The SCORE Off-Roadsman awards were determined by online vote of SCORE members as well as the general public. Among the other honorees were the top point leaders from the four-race 2016 SCORE World Desert Championship, the World's Foremost Desert Racing Series.

With very tight voting in most categories, Chad Broughton, Scotts Valley, Calif. was selected as the 2016 SCORE Rookie of the Year after his sterling first season in the Trophy Truck Spec division.

Broughton, just 21 years old, won the very-competitive Trophy Truck Spec. In his rookie season in the class, Broughton finished on the podium in all four races, winning his class in the season-opening SCORE San Felipe 250 while finishing second, third and second in the other three 2016 races.

Jeff Geiser, co-owner of Geiser Brothers of Phoenix with his brother Rick, was voted as the SCORE Mechanic of the Year for his work with RPM Racing, of Bristol, Tenn., which fields five vehicles in the SCORE World Desert Championship.

Rick Geiser was voted the SCORE Team Manager of the Year for his work helping coordinate the racing efforts of RPM Racing. This was the second straight year that Rick Geiser has won this award.

"The year of 2016 was another memorable year in the history of SCORE International," Norman added. “We witnessed a total of nearly 2,100 different drivers/co-drivers and riders/co-riders from 39 U.S. States and nearly 25 countries that participated in our four spectacular races in SCORE World Desert Championship. For my wife Elise and I, this was our fourth year as the caretakers of this amazing international treasure we all know as SCORE International. We are even more committed to work with our racers to expand the reach of SCORE even further than it has achieved so far."

Honored for the first time were the nine all-time winners of the SCORE Triple Crown of Baja, presented by BFGoodrich Tires. The award honors the individuals who have won the overall title at the three traditional SCORE Baja races–the SCORE San Felipe 250, the SCORE Baja 500 and the SCORE Baja 1000.

On hand to receive the newest SCORE award in person were Ashley, Gus Vildosola Sr and Stewart.

After another banner year in the SCORE World Desert Championship in 2016, Ray Field's Dougans Racing Engines of Riverside, Calif. captured the 2016 Engine Builder point championship for the second time.

Another element of the diverse awards program was the presentation of the 2016 Red Kap SCORE Milestone Awards. As it has for 31 years, the coveted SCORE Milestone Awards were presented to those drivers in who finished all required miles of the 2016 SCORE World Desert Championship. A total of 31 racers completed all 1,709.92 required miles in the four-race 2016 SCORE World Desert Championship.

Since 2014 motorcycle and quad classes were eligible for the award along with the pro car, truck and UTV classes.

The entire evening was recorded by to air on the SCORE website.

Armando Castaneda, Sports Editor of the El Mexicano newspaper in Baja California was voted for the first time as the SCORE Journalist of the Year, while GetSome Photo (Art Eugenio) earned the SCORE Photographer of the Year honors for the third straight year.

Winning the SCORE Videographer of the Year award for the first time was BCII TV, the award-winning SoCal company that produces all of the SCORE television shows and special features for the SCORE website.

Norman also introduced the two newest members of the SCORE management team-Mexico's Juan Tintos and Las Vegas' Edward Muncey. Tintos, a two-time former Baja California Secretary of Tourism, will be the SCORE Mexico Liaison and Muncey will oversee all facets of technology development for SCORE after spending the last 10 years as the Senior Vice-President of Technology for the Las Vegas-based Ulimate Fighting Championship (UFC),.

The original SCORE International was founded in 1973 by the late Mickey Thompson and headed by Sal Fish from 1974 until Fish transferred ownership of SCORE International to Roger Norman on Dec. 20, 2012. SCORE continues as the premier sanctioning body in the sport of desert racing. SCORE races feature class for Pro and Sportsman cars, trucks, UTVs, motorcycles and quads competing in the internationally-televised four-race SCORE World Desert Championship.

SCORE Videographer of the Year–BCII TV