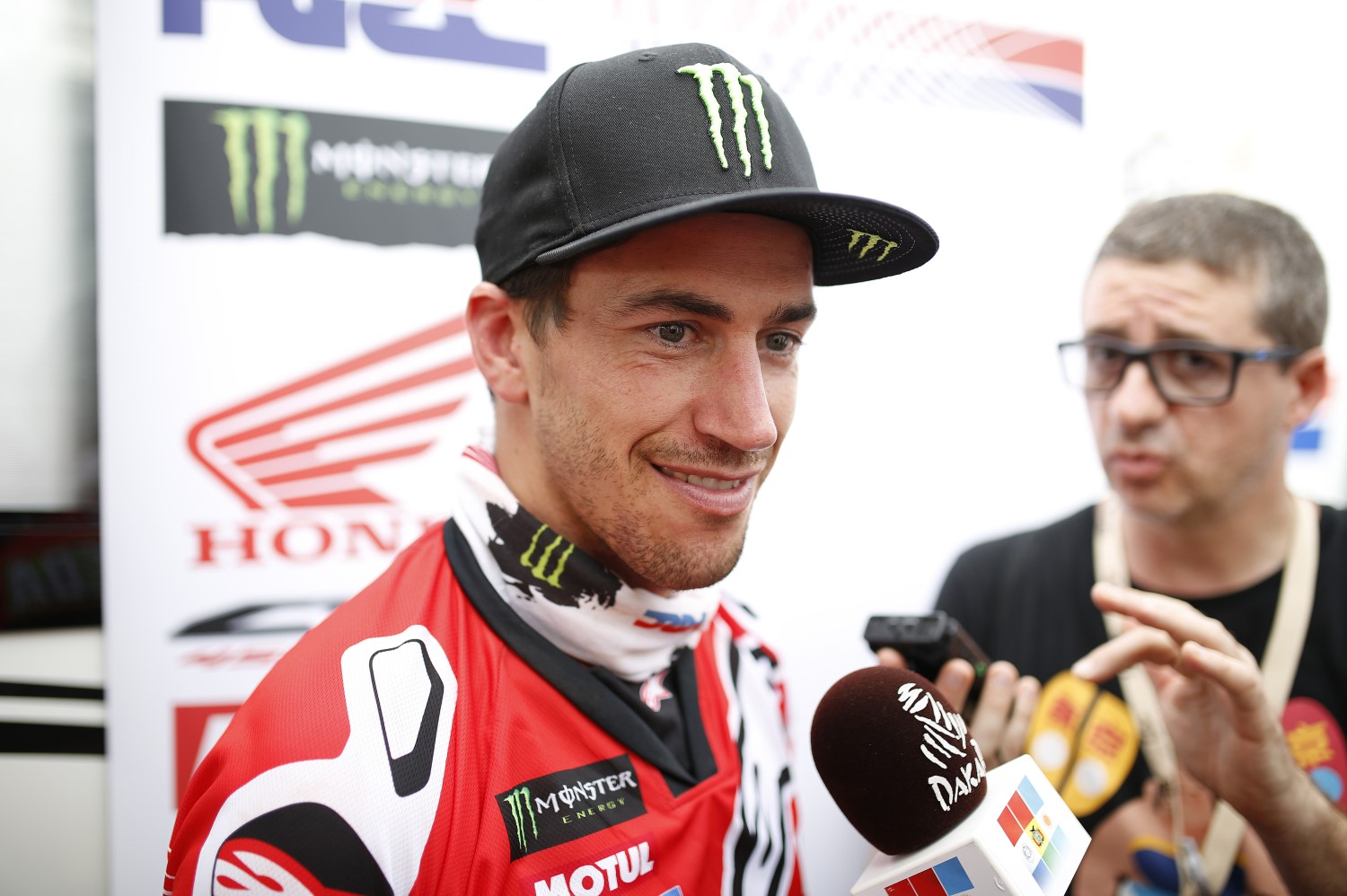 Joan Barreda obtained his third stage victory this year following a time penalty received by Michael Metge, but this change in the situation still leaves Sam Sunderland untroubled and more than ever leader of the bike category. Stephane Peterhansel also picked up his third stage win since the start and regained the lead in the general standings.

Focus
With 449 km of special stage between Chilecito and San Juan as well as only two stages to make the difference in the general standings, the tension ramped up another notch today; all the more so since the trial-like start to the stage really tested the physical capabilities of the competitors, at least as much as the hot weather, which made its return to the race after the cool temperatures at higher altitude. The end of the day was marked by much quicker tracks, but just as tricky navigation, which led to dramatic turns of events in the general standings…

The essentials
On his fourth Dakar, and after having demonstrated some fine capacities since the start in Asuncion, Michael Metge thought he had picked up his first stage victory, by a whisker in front of his team leader Joan Barreda. However, in the end, the stage victory finally went to the Spaniard due to his team-mate missing a way-point and incurring a penalty. The French duo of Adrien Van Beveren and Xavier de Soultrait suffered big time losses in the general standings. In the quad race, Sergey Karyakin grabbed his second stage victory and strengthened his place as general standings leader, ahead of the new second placed rider, Ignacio Casale. In the car category, Sebastien Loeb took advantage of the WRC character of the special stage’s end to catch up and overtake Cyril Despres who had initially distanced his rivals thanks to his navigational skills. Nonetheless, it was Stephane Peterhansel who, after having recovered the time spent with biker Simon Marcic awaiting the medical team, won stage 10 to return to the top of the general standings with a lead of almost 6 minutes. In the truck race, Eduard Nikolaev took his second stage victory with a lead of 7 minutes over his Kamaz team-mate Dmitry Sotnikov, leap-frogging him to become the new leader of the general standings.

[adinserter name="GOOGLE AD"]Performance of the day
Franco Caimi is one of the revelations of the Dakar 2017. On his very first participation, the Argentinean already obtained a fifth placed finish on the fifth stage. However, today he went one better with fourth position at the finishing line, in front of a good number of official factory team riders, thanks to excellent composure with the navigation as well as a great pace on the quicker tracks. This has enabled him to enter the top ten in the general standings, in spite of a one-hour penalty, without which he would quite simply be on the provisional podium.

A crushing blow
Pablo Quintanilla was counting on the tenth stage in order to put pressure on Sam Sunderland. In second place in the general standings, the Dakar 2017 could have been the rally which saw his riding mature and the one that may have brought victory for the Chilean. However, a catastrophic start to the stage during which the Husqvarna rider sought the correct direction for more than an hour, then a heavy fall on the second part of the special put an end to his dreams. Disorientated after a head injury, Quintanilla was finally forced to drop out of the rally for a third time.

Stat of the day
The smallest gap between a winner and the runner-up at the rally’s finish remains 2’12 between Carlos Sainz and Nasser Al-Attiyah in 2010. In light of the duel being fought between Sebastien Loeb and Stephane Peterhansel, it is quite likely that a new record may be set in 2017…

Quote of the day
Sebastien Loeb: “I pushed really hard from the first to the last meter of the second portion of the day, so I couldn’t do much better. I think it was impossible to go any faster. I tried all I could".

Stephane Peterhansel (PEUGEOT 3008DKR #300) Leg 10: 1st / Overall: 1st
It was tough today. The navigation was very difficult and everyone kept getting lost in the maze of dry river beds. At one point, we were lost, and so was a biker who we came across traveling in the opposite direction. He just appeared from behind a bush and I instantly braked as hard as I could. He did too but, in doing so, he fell and we collided with him and he ended up underneath the car. We got out and saw that he was conscious but he appeared to have a broken leg. We stayed with him until the arrival of the medical helicopter. Once we got going again, we had trouble focusing and finding a decent pace. Happily, we didn’t lose our way as much as the others and we ended up having a good run. The time we spent with the motorcyclist was taken into account at the finish and we were eventually accredited with the fastest time. We’re back in the lead now, so that’s a welcome development with just two more days to go.

Sebastien Loeb (PEUGEOT 3008DKR #309) Leg 10: 2nd / Overall: 2nd
We got lost three or four times. We dropped into a small valley but then realised it wasn’t the right route. We lost time in several places. It was quite hazardous and not much fun. Certain waypoints forced us to drive over terrain that wasn’t really suited to this type of car. It was even impossible in places. We went much better over the second part of the stage. We’re still in the fight and anything can still happen. Unless Stephane hits trouble, though, it won’t be easy, especially as tomorrow’s stage kicks off with some more off-road driving.

Cyril Despres (PEUGEOT 3008DKR #307) Leg 10: 3rd / Overall: 3rd
The cancellation of Wednesday’s stage upset our recent rhythm a little bit. Even so, we still managed to push reasonably hard to begin with today. We had a feeling it would be a complex job finding the right headings and spotting the correct places to climb out of certain dry river beds. David did a first-class job on the early part of the stage. After that, I didn’t push as hard as my team-mates and we ended up dropping a little ground to them.