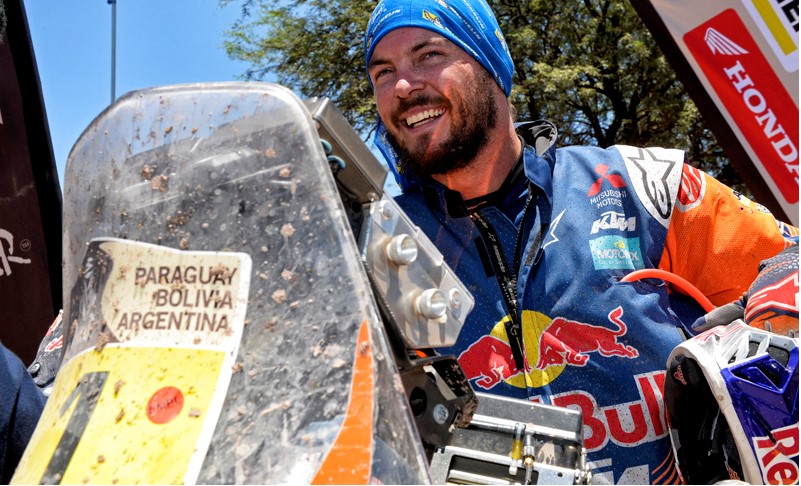 Toby Price took advantage of the 275-km long special to let his speed do the talking and pick up a very convincing win in San Miguel de Tucuman. With a lead of more than three minutes over his nearest pursuers, the winner in 2016 has a solid advantage in the general standings. Sebastien Loeb left his mark on the car category by dominating the second stage from start to finish. The Frenchman kept his most fierce rival Nasser Al-Attiyah at bay and picked up his first stage victory of the year as well as the lead in the general standings.

While the competitors are now in a country well known to the Dakar as they visit Argentina for the 9th consecutive year, the region of Chaco had not yet been explored by the rally. The participants discovered narrow tracks which kicked up plenty of dust in a setting reminiscent of the African Savannah. Special attention was required concerning the many wild animals and flooded fords. Furthermore, the heat sorely tested the competitors' bodies on this first long stage on the Dakar Dakar 2017.

[adinserter name="GOOGLE AD"]Toby Price gave a show of force and has not waited long to stamp his authority on the 2017 edition. The Australian won the stage with a lead of more than 3 minutes over his team-mate Matthias Walkner and almost four minutes over Paulo Goncalves. Xavier de Soultrait also put in a solid performance with the day's fourth best time. In the quad race, Pablo Copetti fought an impressive duel with Nelson Sanabria and triumphed over the Paraguayan at the end of the special. The Argentinean is the new category leader in his native territory. In the car race, Sebastien Loeb let rip with his Peugeot over a route on which the Frenchman was able to focus on speed rather than navigation, pushing Nasser-Al Attiyah, who opened the road today, to more than a minute behind him as well as taking the lead in the general standings from the Qatari. In third and fourth, Carlos Sainz and Giniel de Villiers lie in wait, but Stephane Peterhansel again lost precious minutes. In the truck category, Martin Van Den Brink put in the best performance with his first stage victory on the Dakar, which also sees him take command of the general standings in front of the day's runner up, Russian Dmitry Sotnikov driving for Kamaz.

Toby Price lived up to his race number 1 by dominating the battle on this second stage. The Australian, the first non-European to have won the Dakar, went on all-out attack to leave his team-mate Matthias Walkner and the leading Honda ridden by Paulo Goncalves trailing in his wake. His main rivals of 2016, Pablo Quintanilla and Stefan Svitko are even further back, whilst Joan Barreda has just managed to creep into the top 10.

Delighted yesterday after his wonderful second place at the finish of the first stage in his Ford Ranger, Xavier Pons switched from dream to nightmare after only several dozen kilometers of the day's special. The Spaniard left the tracks and, with a rear wheel missing, was forced to wait for his assistance team in order to finish the special. All his hopes of a good finish in the general standings were crushed on the way to San Miguel de Tucuman.

Thanks to the performance of Sebastien Loeb, Peugeot increases its total of stage victories on the Dakar to 59, the same amount as Volkswagen.

Sebastien Loeb: Sure, I like to be in this position but it's a bit early in the rally. But it's good to have a pace like that. Today was a stage that was really, really fast; a bit unusual. I hope tomorrow will be continue to be at the same rhythm for the fight. I think we did a good stage with no mistakes – that was the most important thing. It's okay for tomorrow. Daniel has learned a lot during this year and we'll have to do good work with the navigation, but I think he is able to do so.