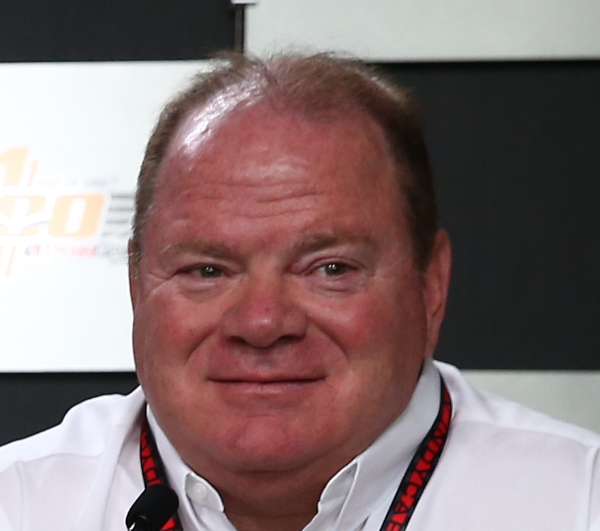 AUSTIN, Texas — There are professional trucking companies that have fewer rigs on the road than Chip Ganassi does this weekend. For the first time, every race car Ganassi has, almost every driver he employs, will be on track this weekend.

Whoever does logistics for Chip Ganassi Racing should be commended, assuming all 14 cars, and all 18 drivers, and all the crew, which has to number in the hundreds — show up on time. Can you imagine how embarrassing it would be if the Ganassi hauler rolled into Circuit of the Americas in Austin, Texas, and instead of unloading Ford GTs for the WeatherTech Championship race, out came a pair of Ford Fiesta Global Rally Cross cars?

Geographically, here's where Ganassi's teams are bound this weekend: NASCAR Sprint Cup and XFINITY are in Chicago (three drivers total); IndyCar is in Sonoma, California (five drivers); Global Rally Cross is in Seattle (two drivers), and the WeatherTech Championship and WEC (eight drivers total) are at COTA in Austin. There are actually 19 drivers in the Ganassi stable, but Justin Marks is sitting the Chicago Xfinity race out, so Kyle Larson can get some more track time.

The team's first race of the weekend is the two-hour, 40-minute WeatherTech Championship race at COTA on Saturday at 12:30 p.m. ET. No. 67 Ford GT co-drivers Richard Westbrook and Ryan Briscoe will be looking for their fourth victory of the season — and Ford Chip Ganassi Racing's third straight COTA win after taking Prototype victories in the last two IMSA races there — while No. 66 co-drivers Dirk Mueller and Joey Hand — who won last year at COTA — going for their first win of the season in Saturday's Lone Star Le Mans.

[adinserter name="GOOGLE AD"]Mueller and Hand were pretty successful the last time they raced in an event with "Le Mans" in the name. They won the GTE Pro class in June's 24 Hours of Le Mans co-driving with Sebastien Bourdais, who is racing an IndyCar for another team in Sonoma this weekend.

Where will Ganassi himself be? His handlers aren't positive — COTA, probably, then possibly Chicago or Sonoma on Sunday. Or both. Multi-series car owners like Ganassi and Roger Penske seem to have mastered the art of teleportation on race weekends.

Even Ganassi's drivers — or in this case, former driver — can scarcely believe the size of the racing empire 58-year-old Floyd "Chip" Ganassi, Jr., has built, with the foundation being his own relatively brief IndyCar driving career.

"When you look back to where Chip's business all started back in 1990 with a one-car Indy car operation, it's very impressive to see the racing empire he's built," said Dario Franchitti, who won three IndyCar series titles in four years, as well as three Indianapolis 500 victories, while driving for Ganassi.

"Running 14 cars in six series across the globe doesn't just happen overnight — you have to have strong partners and first-class team personal supporting you along the way. Decent drivers don't hurt either. It's one thing to just field that many cars, but I think Chip would be most proud of the fact that he's won this season in each of those series. That is no easy feat by any means."

Indeed, with Kyle Larson finally elevating Ganassi's NASCAR Sprint Cup team to the level everyone knew was possible this year, Chip Ganassi Racing is dominant at best, competitive at worst in all six series.

Of course, the highlight for 2016 so far was that historic win in Ganassi's first attempt to conquer Le Mans, which he and his team did with a brand-new car. The Ford GT's central mission all along was to try to repeat the 1966 Le Mans victory with the Ford GT, and against considerable odds, it did. Historic for Ford, historic for Ganassi: He became the only owner in history to win the Indianapolis 500, Daytona 500, Brickyard 400, Rolex 24 At Daytona, 12 Hours of Sebring and Le Mans 24 Hours.

So far in 2016 there have been a total of 10 wins in each of the six series in which Chip Ganassi Racing competes. To wit: WeatherTech Championship (three wins with Westbrook and Briscoe); FIA WEC (one, the Le Mans win with Hand, Mueller and Bourdais); Red Bull Global Rallycross (one, with Steve Arpin); NASCAR Sprint Cup Series (one, with Kyle Larson's first win); NASCAR Xfinity series (two, with Kyle Larson and Justin Marks), and the Verizon IndyCar Series (two, with Scott Dixon).

What's left? Drifting? Formula 1? World of Outlaws sprint cars? Rule nothing out — Ganassi, never a man to leave money on the table, has long told his sponsors: Bring us enough money to field a proper team, and we'll make you proud.