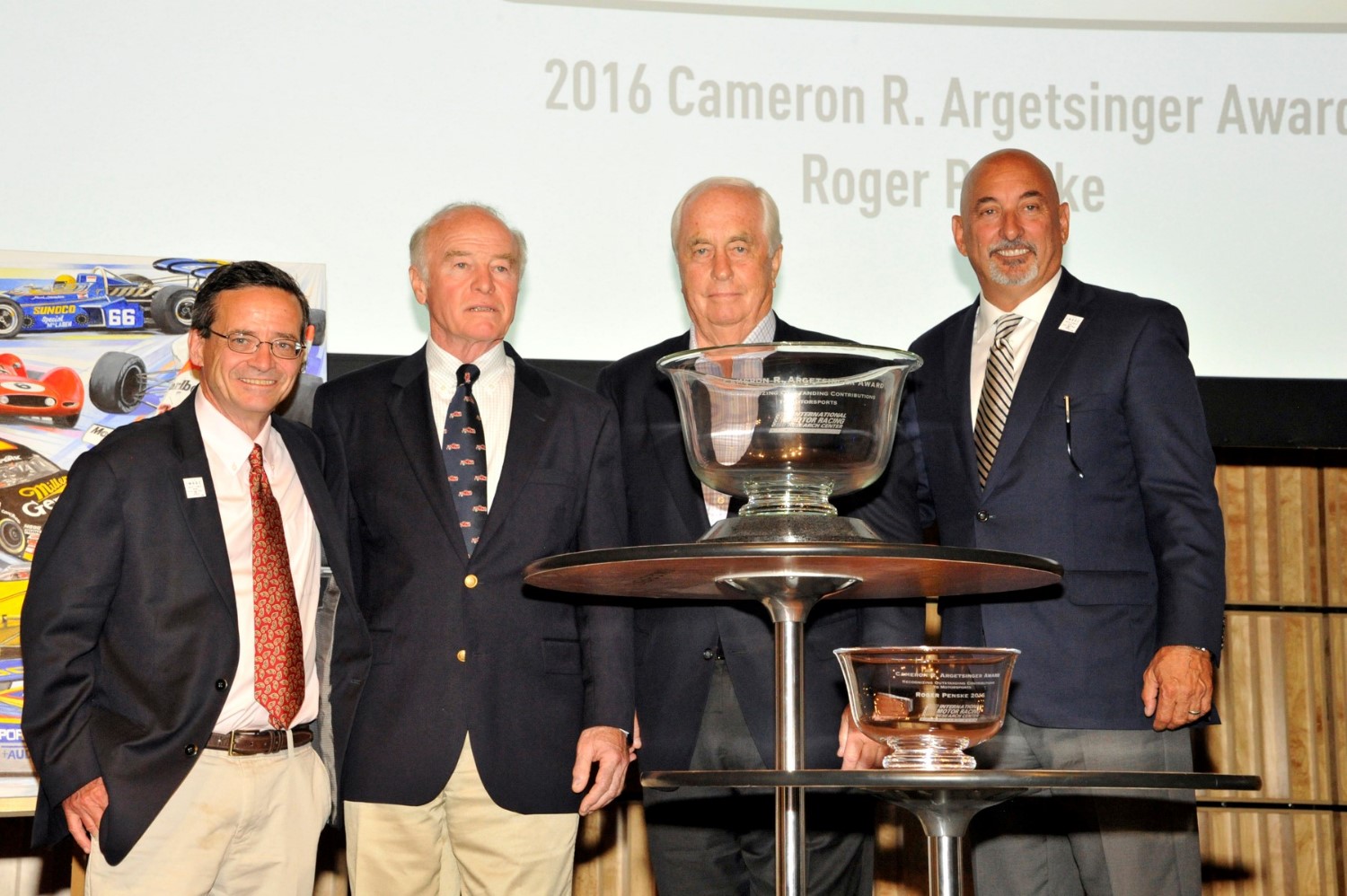 A capacity crowd at the Corning Museum of Glass was treated to a celebratory evening of tributes, shout-outs, slide shows and interviews on Thursday as the International Motor Racing Research Center presented the Cameron R. Argetsinger Award to racing icon Roger Penske.

The presenting sponsors of the evening and award were NASCAR, IMSA, International Speedway Corp. and Watkins Glen International. The sell-out event was supported by Sahlen's.

This was the IMRRC's third consecutive presentation of the award recognizing outstanding contributions to motorsports in the name of the founder and organizer of the first races at Watkins Glen, N.Y. Multi-team owner and former driver Chip Ganassi was the first recipient of the Argetsinger Award in 2014. NASCAR icon Richard Petty was the 2015 honoree.

Penske, whose Team Penske is celebrating 50 years in the sport this year, received the award from Argetsinger's sons J.C. and Duke, along with Bobby Rahal, four-time Indianapolis 500 winner and chairman of the IMRRC's Governing Council.

Racing dignitaries offered up personal memories of their experiences with the man who's known as "The Captain." Speakers included famed TV reporter Dr. Jerry Punch as the master of ceremonies; Scott Atherton, president and COO of IMSA; Michael Printup, president of WGI; Jay Frye, president of INDYCAR Competition and Operations; Lisa Noble, president of SCCA; and Walt Czarnecki, executive vice president of Penske Corp. and vice chairman of Team Penske.

His peers painted a portrait of Penske using accolades emphasizing his calm and effective leadership, respect for others, attention to detail and focus on getting a job done and getting it done well.

"You see his energy, and it builds energy in you," Printup said.

Ganassi spoke to Penske spontaneously from the audience.

"I never had a bitter rivalry with you, we had a great rivalry," he said. Then, speaking to the room, Ganassi related that Penske was the first to send congratulations after his team's recent historic victory at Le Mans.

The gathering viewed a number of video shout-outs from Penske's former and current team members as well as his competitors, all lauding his many successes over the 50 years of Team Penske's reign. The respect Penske has earned in that half-century was evidenced by the tributes from Dan Gurney, Jim Hall, Danny Sullivan, Al Unser Jr., Parnelli Jones and his current crop of team drivers Will Power, Simon Pagenaud, Juan Pablo Montoya, Ryan Blaney, Brad Keselowski and Joey Logano.

[adinserter name="GOOGLE AD"]Mears marveled at Penske's own championship record as a driver before he became a team owner, a record highlighted in remarks by Noble of SCCA and the dinner's slide show.

"I'm learning more tonight about how well he drove a race car. As a driver himself, he understood what it took," said Mears who earned three CART championships for Team Penske. "That understanding took a lot of pressure off of me as a driver."

Penske's driving experience, Castroneves agreed, is the well from which he pulls split-second decisions that lead to success.

"When he makes a decision, there is no way you're going to change it," Castroneves said. "He's the key to me winning my first championship."

Penske himself took the hot seat later in the evening, fielding questions from Punch about his career, personal family life and the time he had a $100 bet with fellow driver Augie Pabst that ended with a car in a hotel swimming pool.

Punch led him back to his early days, asking about the inspiration that would launch a career in motorsports. Penske said it was watching races as a youngster, including the Indianapolis 500 when he was 14.

More than 50 years later, Team Penske is one of the most successful teams in the history of racing.

"We're not in the racing business," Penske said. "We're racers, and there's a big difference. We want to deliver more than what's expected. That's what we try to do in racing, and I think that's why we have been so successful."

The laudatory evening was punctuated by the $27,500 auction bid for an original painting by famed motorsports artist Randy Owens depicting just a few of the championship-winning cars that represent Team Penske's remarkable 50 years in the sport.

The Racing Research Center is an archival library dedicated to the preservation and sharing of the history of motorsports, of all series and all venues, through its collections of books, periodicals, films, photographs, fine art and other materials. The Center is a 501 (c)(3) charitable organization.