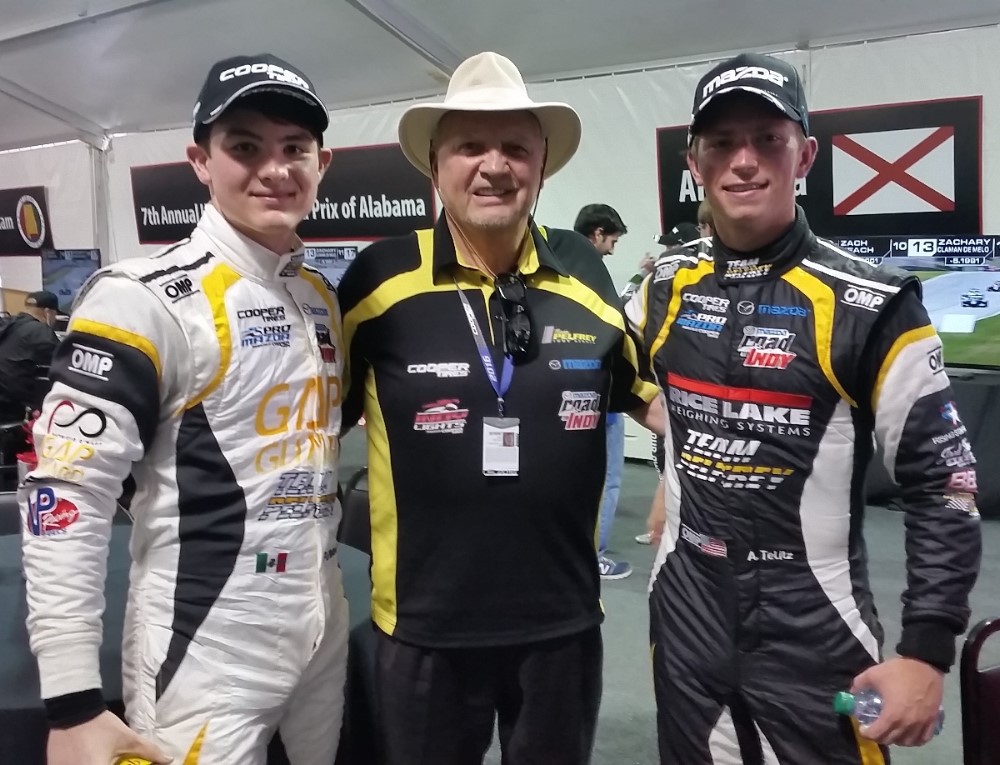 As a young man, Pelfrey followed a racing trajectory similar to the one his drivers are on, from karts through the Skip Barber Championship and beyond. After four years in the Air Force, Pelfrey worked in the aerospace industry before starting his own company. Enginetics Aerospace, based in Dayton, Ohio, has earned numerous industry awards, including the Outstanding Performance in Fulfilling Contractual Requirements Award – recognized in The Pentagon Ceremony by the Deputy Secretary of Defense – and many others from customers such as Lockheed Martin and Allied Signal.

Pelfrey made a brief foray into team ownership in the late 1990s, forming an IndyCar team for drivers such as John Paul Jr., Robby Unser and Sarah Fisher. Team Pelfrey joined the Mazda Road to Indy in 2010 and since that time has earned two Pro Mazda Championships (with Jack Hawksworth in 2012 and Santiago Urrutia in 2015) and two team titles.

What first got you interested in racing?
I grew up in southern Ohio, and at a young age I was fascinated with engines. I found a motorcycle, hopped up the engine and, with two friends, raced every summer on the flat track. It was fun.

The trajectory your drivers are on now is very familiar to you.
I moved from motorcycle racing to karting, and did that for 10 years. We went all over the country doing enduros. We even did nationals a few times. Then I did Skip Barber for five or six years and I think we went to every track they raced at in the country. We tried to move to the P1 Prototype class and go to the Daytona 24 with sports cars, but it was just too fast for me. So that was it for my racing. I loved the competition and trying to build a better engine, better chassis, find better handling. It was more about having fun than anything.

[adinserter name="GOOGLE AD"]You were a successful business owner when you entered the IndyCar series in 1998. You achieved notoriety as the team which first put Sarah Fisher into an IndyCar – how did that come about?

I started my own business, Enginetics Aerospace, building jet engine components, in the mid-1970s. By the late 1990s, it had become a very successful company – we built over 2,000 complex components for the world market and were on the New York Stock Exchange. At that point, I thought I would get back into racing, but this time as a car owner.

I had the IndyCar team from 1998 until 2000. We knew Sarah Fisher because she lived near us in Ohio, and she was one of the few women involved in racing at the time. Everyone has trouble finding sponsorship so I got together with her and her father just after she turned 18. She did a great job for us – Robby Unser was one of our drivers and he helped guide her. But in the course of having the team, we ate up a lot of hardware and crashed the cars pretty badly. I was not paying enough attention to my company, so I got out.

What made you decide to get back into racing in 2010?
I sold Enginetics Aerospace in 2006, so when Dan Andersen decided to close his race team in 2010, we bought the equipment and kept the team. Dan is one of the sincerest and most helpful guys to work with. He’s the right kind of leader for the Mazda Road to Indy. We worked hard on the Pro Mazda team, then under Nigel Tuckey’s guidance, the team expanded into F1600 and USF2000 the following year. We added the Indy Lights team late last year, which we bought from 8Star Motorsports. I went down to Pompano Beach and fell in love with the facility and really liked the key guys. I felt we could do something.

What is it about the Mazda Road to Indy that makes you want to have such an involvement?
I’ve always liked the open-wheel series and that’s what this is, all the way from karts. And it’s affordable, so a guy like me can get involved. It’s a wonderful ladder series, one that I think the Europeans are envious of. It’s a good program to work with.

You have a knack for finding young drivers who perhaps would not get the chance to compete otherwise.

Sam Schmidt is a good friend of mine – we raced against him before he had his crash – and we’ve been partners with him for eight or nine years. Sam used to tell me “it’s almost inverse: the more talent you have, the less money you have." So for the past five years, if there was a driver that I felt was sincere and committed but didn’t have the budget, I would help him. I’ve supplemented the budget for most of the good drivers we’ve had. They had all that skill and if they didn’t use it, they’d be too old, and I think a talented driver should have the opportunity. There’s Connor De Phillippi, who’s racing for Porsche in Europe, or Jack Hawksworth in IndyCar. Some of the guys who raced for us have done really well and that’s very gratifying.

[adinserter name="GOOGLE AD"]Look at someone like Scott Hargrove, who drives for us in Indy Lights. Scott may not be bringing money but he’s bringing talent, both in and out of the race car. He has developed a new web page and new graphics for Gap Guard [a product designed to keep objects from falling in between car seats], he’s worked on some of the race car equipment, and he redid the graphics on the back of the transporter. He’s working with us at Gap Guard in sales and that helps to fund his racing. And he’s a good salesman! We have a dealer network and our objective is to have the product sold as a new car option. Scott’s interaction with the dealers has been the best response we’ve had so far. He’s even worked on the product to make it more attractive!

Is there a return to IndyCar in the future?
The guys on the Indy Lights team are on a three-year contract, so this is a three-year program to get to IndyCar. With proper funding, we’d do it any time in those three years. We’ll be the primary sponsor on Stefan Wilson’s car for the Indianapolis 500 with KV Racing so that gets us back there. After that, we’ll see.