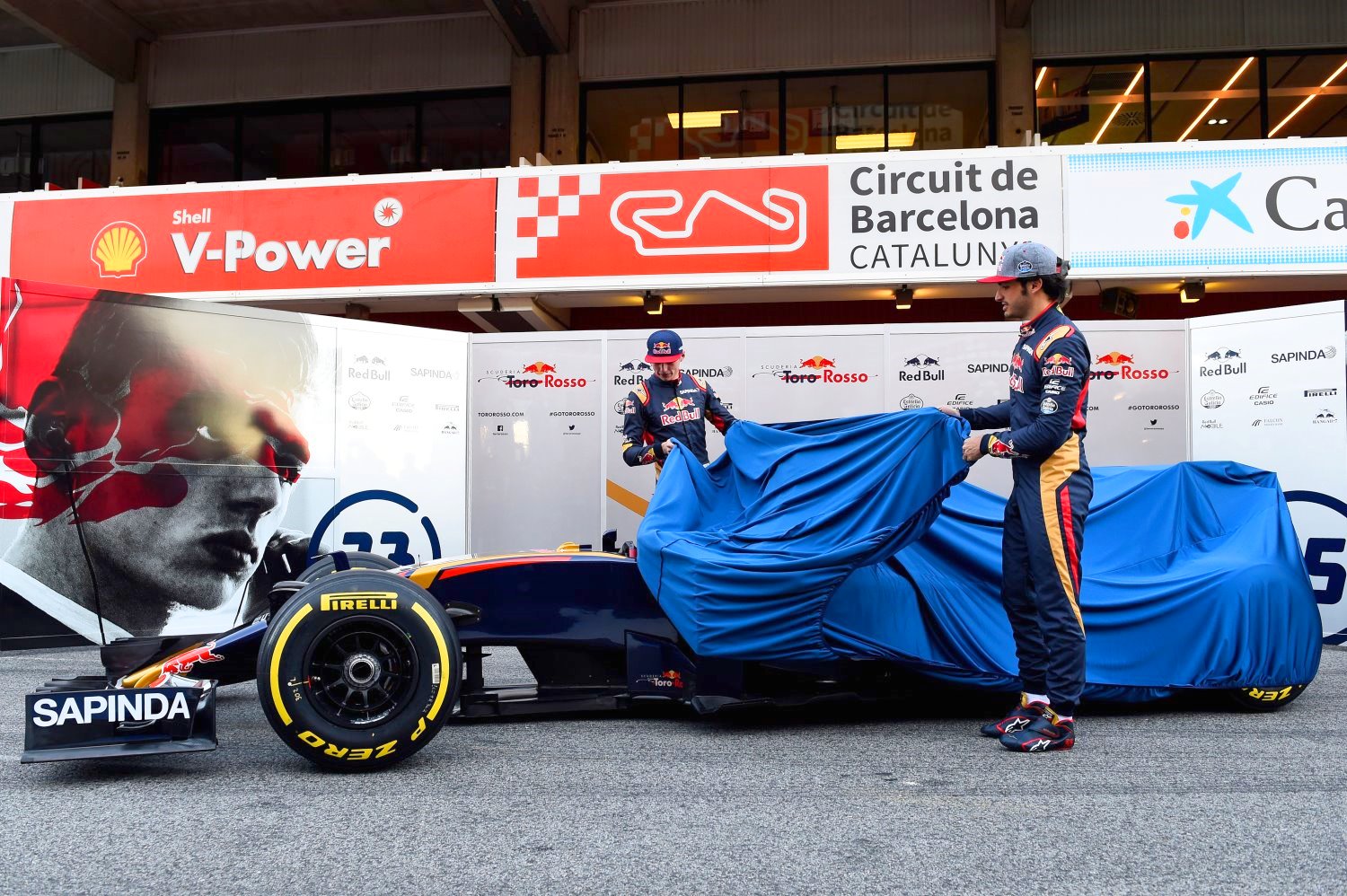 This will be the eleventh season in which Franz Tost has steered the Scuderia Toro Rosso ship through the waters of Formula 1. Team Principal Franz Tost is looking forward to seeing how our drivers progress with a season’s racing experience and is happy be teaming up with Ferrari as our power unit supplier once again.

Same drivers, but new car, new engine, new factory… What do you expect from the 2016 season?

"I expect a successful 2016 season because we are much better prepared in many different ways than the years before. I'm convinced that the new car, the STR11, which has quite a successful predecessor, will be another big step forward. In addition to this, we are back together with our friends from Maranello, with Ferrari, and as the past has already proven, we will certainly have a fruitful partnership. I'm really looking forward to this new season with the Prancing Horse.

"As for the drivers, Carlos and Max are very high-skilled and they already performed well last year, learning very quickly. I can now expect that the experience they gained in their first season will help them make another step forward. The team itself has evolved as well. We have changed some positions in the attempt to improve further and I hope this will end up with positive consequences. I'm really optimistic about the season ahead. In addition to this, now that we have got a new factory, all the people are under one roof. This will surely make communication and collaboration easier, and I'm sure our performance will consequently benefit from it as well."

In what way did the late decision to have the Ferrari power unit affect the team?

[adinserter name="GOOGLE AD"]"The late decision will inevitably have a small effect on car performance, because if you have more time for the design stage, then you can possibly come up with better solutions. I'm quite optimistic and I see the STR11 as another step forward. The STR10 was quite a competitive car last year and I think that we can continue improving."

In 2015, the power unit we are using this year proved very reliable. Is this year's main aim for Toro Rosso to have a reliable car?

"After the first test I must say that we have achieved all our goals. We were very much focused on reliability and the fact that we managed to do 447 laps/2080 km – which is the maximum amount we have ever done in a test session – proves that our engineers have done a good job. To be able to complete 161 laps in a day without any major problems is a brilliant result, which makes me look forward to the new season."

Does the fact that part of the team is based in our wind tunnel facility in Bicester (UK) make our team any less efficient?

"In England we have a fantastic infrastructure with highly skilled engineers. Last year they even won an award for the most efficient race car and they do a fantastic job. If we were to move the wind tunnel to Italy, it would take a lot of time and to build it up takes even more time, and to calibrate it, even more… So we would lose a minimum one and a half seasons, maybe even more. That is one good reason to leave it in the UK. However, thanks to all the communication technologies available today, it's not a problem to set up regular video conference meeting and work in a very efficient way."

What is a realistic target for Toro Rosso this year?

"Realistically, I expect that we can achieve a podium this year after getting so close to it last year in Budapest and Austin, where Max finished fourth. I hope that the new car works well and is reliable and that the team and drivers do a good job. Therefore a podium position should be possible. The target for us this year is to finish fifth in the Constructor's Championship."

Max ‘n Carlos, Carlos ‘n Max, whichever way you spin it, we have a pretty impressive driver line-up for 2016. Our two drivers talk about their expectations for the season and what’s changed now they are no longer rookies.

What is different from year one to year two?

Carlos:
The difference is that you already know most of the tracks, as well as the team, you're very familiar with the steering wheel and you know Formula 1 in general and how it works, so you can have a much more clear approach of it all.

Max:
It's a more relaxed environment. You know more what is coming because you've experienced it last year, so you can approach it being a bit more relaxed.

What does not being a rookie any more mean to you?

Max:
Exactly what it says – not being a rookie anymore! For me, it doesn't really change a lot. It's just that you have the experience you gained from the first year. Of course, you can't call yourself a rookie now, because you've driven the tracks and you've experienced one full year of Formula 1.

Carlos:
It means obviously a bit more pressure from everyone. They expect you to be a bit more consistent and make less rookie mistakes but it also means that you are a more mature driver.

What about driving the STR11 and working with Ferrari?

Carlos:
It's a little bit early to say but the feeling is already really good. Regarding Ferrari, I must say it's certainly a step forward in terms of power. You can clearly feel it as soon as you drive out of the box so that's a positive thing.

Max:
Everything is going very well so far. We've done a good amount of laps at the first test and with Ferrari it's all working very smoothly at the moment, so I'm very happy.

[adinserter name="GOOGLE AD"]How will knowing already the tracks help you?

Max:
It means you are better prepared for the first practice session at each circuit. You don't spend so much time learning the track because you've driven it before, so you can begin working on the set-up of the car earlier in the session.

Carlos:
Reliability was our most limiting factor last year and we certainly have to improve on this. I can't wait to get this season started!

The technical buck stops here: as Technical Director every aspect of the STR11 is James Key’s responsibility. It’s been a very busy winter in which he and the designers have worked to develop our 2016 challenger, coming up with new solutions and capitalizing on the strong points of last year’s car. They have also had to deal with an incredibly tight time frame when it came to handling the switch to Ferrari power.

"We have been through an incredibly busy 3 months, our directions for the STR 11 were well established in August last year but when the engine change decision was made we had to put a large part of the project effectively on hold. This did not stop us developing, but did increasingly constrain the flexibility we had to design-in what was at that stage an unknown Power Unit. When the agreement was finally given the go ahead in late October last year and we were able to discuss details with our partners at Ferrari it was clear that the task ahead was significant, we made life more difficult for ourselves too by specifically setting out a plan to fit the new Power Unit into the existing packaging space we had to minimize any installation performance deficit on the rest of the car as best we could."

"Power units form a very large part of current cars architecture as implications go well beyond the space between the chassis and gearbox. There are also the other critical systems – cooling circuits, electrical installation, gearbox internals design, exhaust systems and specification etc which all need to be covered and redesigned, and all of this affects everything from the cockpit to the rear suspension. I think the team has done an outstanding job to get the car complete in time for the first test, it has been a hard push to achieve this but we made it. We have some excellent people at STR and I think it shows what we can do by catching up and hitting the first test in just a few months.

The 2015 Ferrari power unit is already well-established and a really good step forward from their 2014 PU. It should be a good performance step for us and brings us closer to most other teams compared to last year. We look forward to good reliability too given that it has run an entire season already."

"Clearly, it will be very important to work on chassis development in the strongest way possible. We will be the only team with a year old spec power unit and it will not be further developed from what we have now, all other teams will have PU development so we will need to compensate as best as possible with chassis development.

When it comes to this year's chassis, we wanted to concentrate on improving the low-speed cornering capability of the car. Last year's car was a big step forward and particularly good in medium and high speed corners, but we have felt our lower speed performance was not as competitive as we would like. That has been one area which has led to a change in approach for our 2016 car. In other aspects we have an evolution of strong areas of development from 2015, or a completely new direction where better ideas have formed or we need to address other known weaknesses."

"All of our recent work on STR11 has been done with the benefits of our new state of the art facilities in Faenza. It's a great motivation to see this amount of investment going into the team, it's a really positive sign for everyone and gives us all a lot of confidence. We've been able to sit most of the technical group that's based in Faenza in the same office, which helps communications and visibility of what's going on. So we've got CFD people, the vehicle performance group, Design groups and others, all sitting in the same office.

"New R&D facilities and manufacturing capabilities have been built in too, making the team significantly more efficient than before. The IT infrastructure has also been improved, we have many meeting rooms now with video conference facilities which allow quick and easy communications with our technical office at Bicester in the UK. This has further improved communications which is essential over two sites in two different countries. Finally Bicester has also been through a similar process with a complete new office and manufacturing facility to support our wind tunnel and aerodynamics department. This all helps the team work to a better level and push our ideas and developments that little bit further. Taking everything into consideration, the target for 2016 will be the same as last year. It will not be easy, but we know that we had the chassis and drivers to achieve that in 2015 but too many problems stood in our way, so we will try again in 2016."

(from the left: the factory in Faenza and our Aero Department in Bicester, UK)