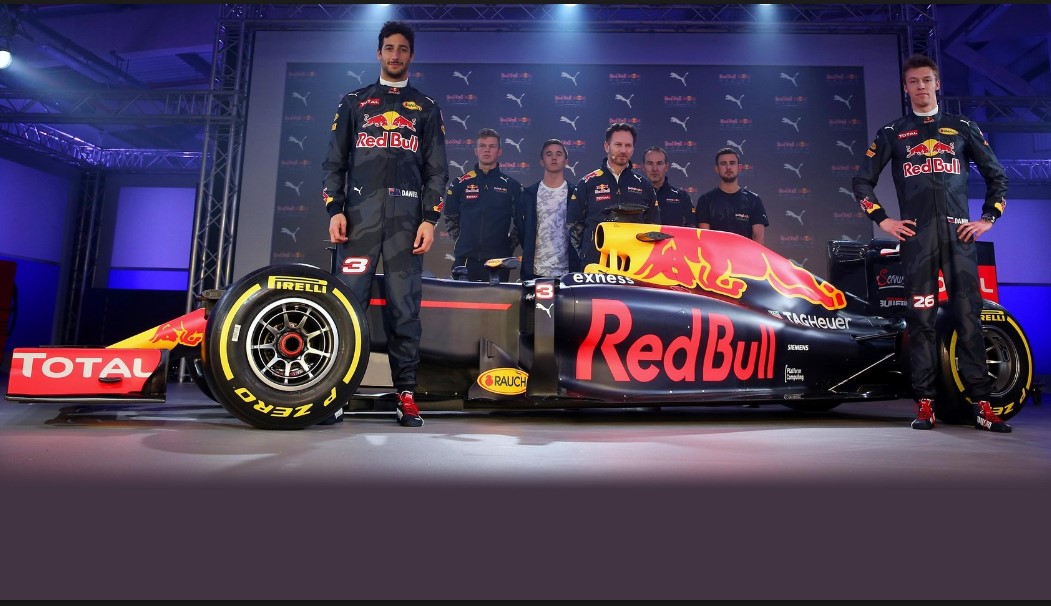 Ahead of the track debut of the team’s new RB12 car in Barcelona next week, Red Bull Racing drivers Daniel Ricciardo and Daniil Kvyat, along with Team Principal Christian Horner, were on hand to help reveal the team’s exciting new look as a concealed F1 car spectacularly morphed into a troupe of dancers who treated hundreds of guests to a thrilling routine before the team’s new colors and matte livery were unveiled.

The show, at a venue in East London also saw the debut of PUMA’s eye-catching and innovative new lines of team wear, the first collection of a multi-year partnership, which will see the two sporting powerhouses go #FasterTogether over the coming seasons.

[adinserter name="GOOGLE AD"]At the heart of the stylish new designs is The Stampede – a graphic illustration of charging bulls that features across the team’s race suits and team wear, as well as on replica styles and the lifestyle collection.

Red Bull Racing driver Daniel Ricciardo said: “There’s always a buzz in F1 at this time of year and launching the new car livery, race wear and a new team look, as we did today, gets the season started in a fun way. It’s pretty cool to be with PUMA, they’re a brand that gets who we are and you can see that in the product designs revealed today. It’s a bit of an understatement to say I’m excited to drive the new car next week – I can’t wait! We’ve got a pretty intense few weeks of testing ahead but I’m up for that and I’m definitely hungry to get racing in Melbourne."

Red Bull Racing driver Daniil Kvyat added: “We’re all looking forward to the new season and the launch today was a really good way to start. The new team kit and lifestyle look that PUMA has designed is great, and I think the fans will really like the replica wear. PUMA’s research into the performance and comfort of racewear is really impressive. We spend hours at a time in the car, often in very extreme conditions, so having gloves, suits and bodywear that protects you is really important. As for the next few weeks, I’m really looking forward to seeing how things progress. I think we finished last season in good shape and hopefully we can carry that through to the start of this season. It’s an exciting time for a driver and I can’t wait to get started."

Red Bull Racing Team Principal Christian Horner said: “Seeing our new livery for this year alongside our new team wear from PUMA was a proud moment for us. PUMA have done a very impressive job with the design of the team kit, replica and lifestyle product lines. There has been a lot of work behind the scenes to get ready for this, and it has all paid off with today’s event which I think has only built our excitement for the season ahead."

PUMA’s Global Marketing Director Adam Petrick said: “It’s fantastic to kick off our partnership with Red Bull Racing through an event that represents both brands so well. PUMA enjoys many synergies with Red Bull Racing, and there’s enormous energy and excitement in both teams to bring our partnership to life in unique and creative ways – through product design, marketing and fan engagement. Our aim was to reveal a new team kit and car livery in a way that breaks with tradition and we’ll continue to push the boundaries of this partnership through the years ahead."