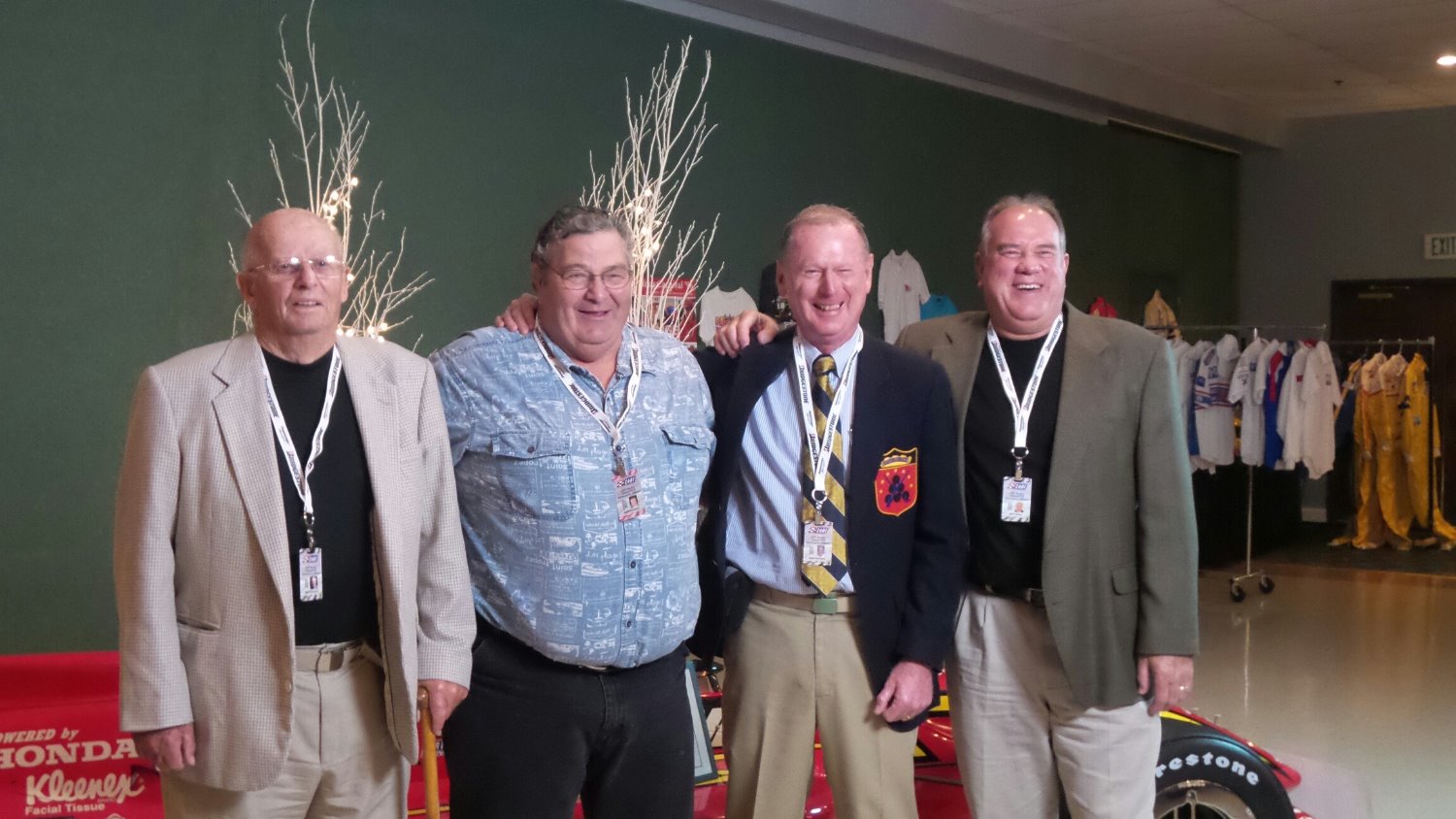 Recently, AutoRacing1's Lucille Dust caught up with former CART safety team director Steve Edwards. The Indianapolis native joined the nascent organization at its founding in 1979 and became one of the driving forces behind the group widely considered to have been a pioneering force in motorsports safety.

"I loved IndyCar racing as long as I could remember. My family and friends and neighbors took me to the Speedway. I listened to Sid Collins on the radio, read the newspaper, followed the series. The significant moment, and I did not know this at the time, was at the 1955 race. I was nine years old and I was in the infield just down from the second turn. Bill Vukovich had won the Indy 500 in 1953 and in 1954 and was leading this race. Vukovich had his horrible, fatal crash on lap 57 and went barrel rolling off the track. I remember it, I witnessed it , I saw it. Later when I got into IndyCar safety, my Mom said to me 'for you know that the people that were there at the 1955 race said that you ran over to the fence and you started to climb the fence? And you said I want to help that driver.' And that was obviously where the pilot light got lit that I just love IndyCar safety."

Steve graduated from Purdue with a degree in marketing and went on to get his master's degree in business at the University of Miami. Through a twist of fate, the company he went to work for in Florida was going to open an office in Indianapolis. They knew he was familiar with the city and they moved him back to his home town. One day in 1969, he went to the USAC office and applied to be an official. They put him on a waiting list and a few weeks later he got a call. He started working sprint car races, stock car races, dirt races and midget races.

"My real love was to get into IndyCar but that was kind of an elite group at the time. But God is good and I got called one day. They said you are doing a great job and we would like you to start working IndyCar races. The guy that was doing safety for IndyCar races for USAC was Jack Gilmore. Jack and I became really close friends. We ran some doubleheaders back then, stock cars and Indy cars. So as I started working more IndyCar races and I started to work at the Speedway.

[adinserter name="GOOGLE AD"]"One day, my phone rang and it was Roger Penske. Roger said they were forming this new group called CART. Roger had talked with his drivers and his drivers talked with the other drivers and they all said they wanted me to be the director of safety. I was humbled, flattered and honored. Roger flew me up to Detroit and we had an organizational meeting. Roger said to put a safety program together, tell me what you need and let's get back together soon. I have the greatest respect in the world for Mr. Penske. What an incredible businessman, incredible human being. He inspires you.

"Every track in the USAC days had their own safety crew, registration crew, technical crew and scoring crew. As the sport evolved, we built our own teams and they traveled to every race. Professionally we had to develop the CART crews. We had to have consistency week in and week out. I used to say the only thing I did once a year that I was any good at was open Christmas presents. You can't just do something once a year. The dedication of these people at the individual race tracks was incredible, except they only saw the cars and drivers once a year. We needed to know how is this car built if we need to take the car apart. You don't get that knowledge if you only do it once a year. We still utilized those workers but we brought our 20 some safety people. We brought our own mobile trauma center with doctors and nurses, firefighters, paramedics, our own safety trucks, our own cleanup trucks. everything from what is the best material to use to pick up oil off the racetrack. What is the best material to fight fires? We went through a whole evolution of that, AFFF, dry powder, purple k. Turns out it is water. But you cannot put too much water on the racetrack or you can't go racing."

I asked Steve what was the most common thing the safety crew dealt with at the track back in the 1980s.

"A blown engine would oil down the race track. We would go through the dynamic of what kind of oil dry to use and how do you get this cleaned up and get back to racing. You don't want to run 20-25 laps under yellow while you are cleaning up oil. That doesn't play well on television. The people in the grandstands want to see racing and not a bunch of guys with brooms."

Steve continues to answer my question. "Accident wise, that was an era of foot injuries and lower extremities injuries because the foot boxes were not as strong as today. Rick Mears severely damage his feet in an accident in Canada in 1984. Fires were more prevalent back then because they carried 60-70-80 gallons of fuel. The whole structure of the cars was not the same as today.

I asked Steve why he resigned as safety director after the 1989 season.

"That is an interesting story. I absolutely love the sport. I was watching a program on television one night with Bill Walsh, who had been the coach of the San Francisco 49ers. He was talking about his years. I have a lot of respect for him. What a great coach. He won all these championships, had great players like Joe Montana. He had just left coaching and he said it was his philosophy that once you have done something and done it really well for 10 years, you ought to move on for two reasons. You should take on a new challenge and you should let someone else have the opportunity to do what you've been doing. I had never thought about that. So as much as I loved the sport, I thought I just need to move on and do something else. Maybe give someone else the chance to do what I had been doing. Maybe have a new prospective on it.

"This decision was extremely painful for me. I was a child from a broken home and a very dysfunctional family. My Dad had left before I was born. We were very poor. And I had never forgotten that the good Lord got me through that. All my life I had felt this calling and desire to go do for kids what somebody had done for me. So I wanted to move on to do that. When I left IndyCar Racing, I did some event consulting for a while. I am a marathon runner so I put on some world class running events and that is how I met my wife, Joy. We did that for a while and then I became a youth pastor in our church. Now I am at a military school working with kids. I still love IndyCar and watch all the races."

[adinserter name="GOOGLE AD"]What is the one thing that you thinks stands out about the safety team over your term as director?

"I am not going to brag about myself because everything we did as a team. It is hard to pin it down to one thing. I think it was the recognition of the many components of what safety was. You have the Mears accident and you focus on the foot box. You have a bad fire and all the recognition goes on the fire. Or you have a lot of medicals. We realized the vulnerability in so many different areas and we kinda built a fence around that. We addressed each of those areas, realizing that on any given day or at any given track, one of those things can bite us. They are all important and we can't all of a sudden put all our attention on one thing."

With the loss of Justin Wilson this past season, I asked Steve what his thoughts were about closed cockpits.

"I can see both sides of this debate. Jackie Stewart once said that the IndyCar drivers are different than fighter pilots. Drivers need to have visibility on the track where pilots fly from an instrument panel. Other series, like Offshore Power Boats and World Endurance, have added the extra safety without much problem. One of my concerns is when the driver is upside down and there is fire, will it get too hot inside the car for them. I remember seeing Merle Bettenhausen's accident in Michigan in 1972. His car was on fire and his face shield on his helmet was melted. What If the mechanism to open the cover fails during an accident and the safety team cannot get to the driver. If it can be done and not compromise the extradition or fire fighting process, then it should be addressed."

Edwards has many funny recollections of race car drivers and incidents. He told me the story of Danny Sullivan at Michigan Speedway. An unnamed driver came out of the pits and crashed into Sullivan's car and ended up taking both cars out of the race. While Edwards was investigating the crash, Sullivan left his car and walked over to the other race car. Race control wanted to know if the drivers were OK. Edwards told them yes. Sullivan was speechless as he approached the stopped car that had ended his race. Then Sullivan removed both rear view mirrors from his opponent's car and threw them both into the cockpit. All Edwards heard was Sullivan remark "You weren't using those mirrors anyway."