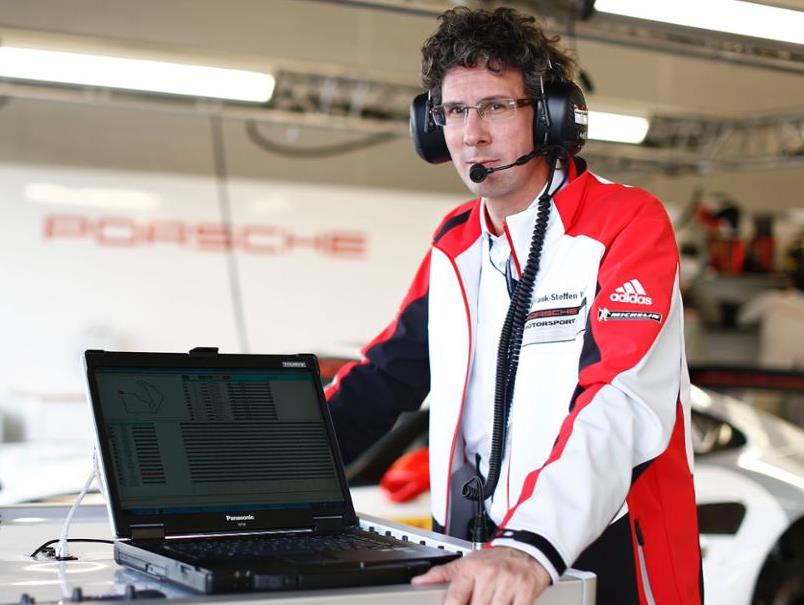 Before the next round of the Tudor United SportsCar Championship on Sunday: Interview with Porsche’s Head of Motorsport Dr Frank-Steffen Walliser on Motorsports as a driver of new technologies. The key argument is that technology takes driver skill out of the equation and motorsports no longer can be categorized as a sport, but an engineering exercise. Since engineering is not a sport, racing with technology is not a sport. Because engineers are running sportscar racing and F1, all they care about are new technologies. No mention of that topic in this interview.

Dr Walliser, how would you evaluate the success at the most difficult race of the season by now in the USA?

“Several factors came together at Watkins Glen. Falken Tire had a risky but clever strategy that worked. The freak weather with constantly changing conditions was in our favor. It’s not exactly a secret that our 911 RSR performs particularly well in the rain. Still, the drivers have to manage to keep the car on the track and not make any mistakes. But despite our victory, the race wasn’t entirely without mishap for us. Not every pit stop went perfectly. Although we’re very pleased, we certainly know we still have things to do."

This coming Sunday it’s Mosport. What improvement can you make until then?

“We can definitely focus on improving our pit stops and try to respond better to unexpected situations. That’s possible from race to race. Our drivers and teams are highly motivated after this double victory. I’m sure that they’ll do even better at Mosport."

After a first half of the season without any wins, is this the breakthrough?

“This win certainly helps with motivation. But at this stage it’s too early to talk about a turning point. The race was extreme. If we could win on a dry track at a race that isn’t constantly hampered by caution phases and interruptions, then I would say we’ve made a breakthrough."

As the Head of Motorsport at Porsche, you are also responsible for the GT road cars. Does this mean that during the week you build street cars and on the weekend you take them racing?

“Well actually we’re also busy working on race cars during the week. Racing and production run pretty much in tandem. After all, our 911 RSR, which we campaign in the Sports Car World Endurance Championship WEC and in the Tudor United SportsCar Championship, is based on the seventh generation of the iconic 911 sports car. Since assuming my role in October 2014, I’ve in fact concentrated very much on production development projects and have worked to get the 911 GT3 RS and the Cayman GT4 on the road. Production development is about complex technical processes. But here as well, it takes fast progress and concentration. The challenges we face are not that different. Taking responsibility for both road and track vehicles is an essential part of my job."

Which is the dream job?

“I have a left and a right heart chamber – one side is dedicated to racing, the other to production. It was always this way. Now to be responsible for both GT racing and production development is extremely appealing to me. There is no other job in the world like this one."

This constellation must surely help the technology transfer between motor racing and production.

“The transfer of technology is important and Porsche is one of the few sports car manufacturers that doesn’t do this for marketing reasons. Motorsport is an essential driving force behind new technologies. An example: We contest GT racing with restrictors, in other words the air intake of the engines is restricted. If I want a lot of power this can only be achieved through reducing internal friction and a high level of efficiency. We’ve gained a lot of experience over recent years, especially with the normally aspirated engine, and you notice this one-to-one with our road-going engine. A great deal of ideas flow from motor racing into our production cars. The lateral air intakes, for instance, was trialed in the GT race car and then transferred to the 911 GT3 RS. The same goes for the aerodynamic components like the position and size of the rear wing. The central front air vent and various efficiency measures in the engine, for example the high-rev concept, come from the race car. Because it’s the very same employees who build the road-going and race vehicles, a kind of natural technology transfer takes place. The colleagues do not forget what they did on the race car, but carry this know-how over to the street car and try out things they believe might also work." The Porsche 911 RSR in Watkins Glen

Does the technology transfer happen in the opposite direction – from production cars to motorsport?

“Of course. The technology transfer always flows in both directions. This, for instance, is how direct fuel injection from our current engine generation was taken from production and applied in motor racing. Up until that point we’d only used intake manifold injectors. In the 911 GT3 R, our new race vehicle for the FIA GT3 classes, we use the direct fuel injection that was first introduced in the boxer engines of the 911 GT3 road-going cars. From this we are hoping for advantages with efficiency. The intensive exchange between colleagues from motorsport and production development is everyday practice for us. In the motorsport department we have a great interest, of course, in ensuring that as many components as possible are realized in the basis car. In turn, the colleagues from production development are keen to participate in the experiences from motor racing and adopt appropriate measures into the production car. For example, motorsport was a very important driving force behind the extension of the wheelbase on the current 911."

What importance do you attach to hybridization in motorsport?

“We regard ourselves as pioneers. With the 911 GT3 R Hybrid, we fielded a hybrid GT race car back in 2010 already. It underlined its huge potential and as a result it was the source of ideas for the 918 Spyder and the Le Mans winning 919 Hybrid. Hybridization is also conceivable in GT racing. But if such a regulation was to be put into force now we wouldn’t have any competition. Our opponents have not yet reached this stage. So it’s not high on our list of priorities, particularly because the topic is completely covered at Porsche by the 919 Hybrid. In terms of GT racing, my prognosis is that something might happen in five to six years.

In general, how does Porsche benefit from motor racing?

[adinserter name="GOOGLE AD"]“Porsche stands for sports cars just like Scotch tape does for adhesive tape, if I can put it like that. Motorsport is a very important core brand value. The very first Porsche contested its first race after 14 days and won. Racing for us means high-tech, high stress, pitting ourselves in competition, and not avoiding challenges. We go out on the race track with good drivers and good cars and we say: Now let’s see who can do it the best. There are no excuses on the race track. The one who wins has done the best job. This is why winning Le Mans is so highly regarded. With road cars you also face competition, but it’s rarely as direct. In motorsport you’ve got to deliver the perfect performance. And you mustn’t forget, motorsport is also something with which all our employees and our customers identify, no matter which product they drive."

Sitting in the winning car at Le Mans were Earl Bamber and Nick Tandy, two drivers who were practically trained in the Porsche brand trophy series. Why does Porsche put so much emphasis on developing young drivers?

“Earl Bamber and Nick Tandy are the best answer to that question. Both of them received their finishing touches as race drivers in the Porsche one-make series. They are also competing for us this weekend at Mosport. Before they became works drivers, we knew them through the intensive support not only from their results on the race track but also as people. We teach our supported drivers more than just about racing and races. They also learn everything about fitness, media awareness, time management and all the things that make a perfect race driver. If they have competed in the makes cups, we get a very clear idea about talented youngsters, because racing series like the Porsche Carrera Cup and the Porsche Mobil 1 Supercup are true driver championships. The cars are almost identical and those who master them the best are good drivers. Our youth development program, which we launched in 1997 with the first Porsche Junior team, is consistent, long-term and successful: Many of our current works drivers came from here. This shows once again: Porsche opens all doors to those who are talented and really fast."

The winning 911 RSR at Watkins Glen was campaigned by the Falken Tire customer team. How important is customer racing at Porsche?

“Customer racing has a long tradition at Porsche. We believe it is very important to not only run works activities, but also offer our vehicles and expertise to our customers. Many successes in Porsche Motorsport were scored by customer squads, including important Le Mans victories and other outstanding successes at 24-hour races like at Daytona or the NÃ¼rburgring. Around 600 customers all over the world race our cars. We owe many important chapters in Porsche’s successful motorsport history to them."

What makes it so attractive for teams to put their trust in Porsche?

“First we offer good vehicles of course, which they can race successfully under their own direction. The latest motorsport product is now the 911 GT3 R. And then comes the service at the race track. We are on location with our trucks and help our customers with advice and assistance and, of course, with spare parts. At Le Mans, for example, the engine and body of an Asian customer team’s 911 had been badly damaged late Thursday evening. Of course they were eager to race, they’d travelled a long way, and Le Mans is run just once a year. So we helped them to get the car back on the track on Saturday morning for the warm-up. That was quite a feat which you can only accomplish if you are well prepared. Our customers know this and they trust us."

“Definitely. Our customers are intensively engaged with the product and hence have a wealth of experience. They race our cars each weekend somewhere around the globe. Many great ideas evolve, these flow back to us and we happily pick them up. This is a useful technological transfer for everyone – for us and our customers."