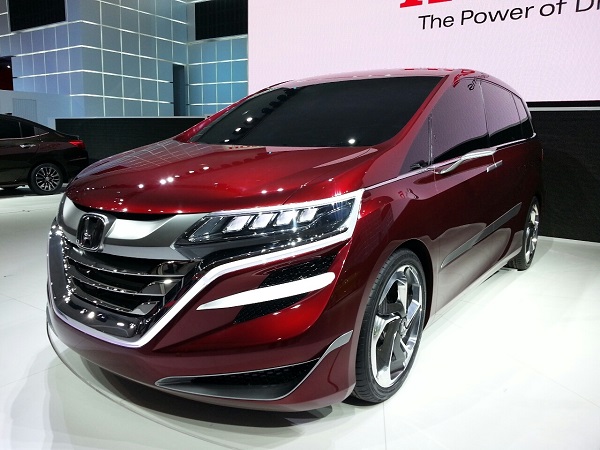 People tend to treat buying minivans like going to the dentist. They do it because they have to not because they want to. Minivans are just not cool and people prefer to buy a large SUV because you look rugged and tough rather than sensible and family oriented. But the fact is that a good minivan is a great choice for a family and for most people, it is actually a much better alternative over an SUV.

A minivan is tough to beat when it comes to carting your kids around or hauling a bunch of stuff. Vans have more room, lower floor, and offer better fuel economy than a similarly sized SUV.

One of the best choices when it comes to vans has been the Honda Odyssey – we drove the 2016 and also preview the 2017. We tend to choose the higher end Odysseys but this time we wanted to see how the lower end Odysseys are so we got our hands on an EX model and went driving.

The Odyssey comes in several different models starting out with the LX for $29,550. Our EX is next with a base price of $32,700 that adds keyless entry, 17 inch alloy wheels, second row sunshades, tri-zone climate control, and a 270 watt stereo system with 7 speakers and a subwoofer.

Next up is the SE at $33,650 that adds Honda’s built in vacuum cleaner, rear entertainment system with wireless headsets and a power inverter. The EX-L adds some technology with features such as Forward Collision Warning, Lane Departure Warning, automatic dimming mirror as well as leather seats for $36,200.

The Touring model gives you 18 inch wheels, third row sunshades, 10 way power driver’s seat and split third row easy folding seat which will take out $42,455 out of your bank account.

If you want to go all out, the top of the line Touring Elite gives you a wide screen rear entertainment system, blind spot monitoring and a 650 watt stereo system with 5.1 surround sound for a cool $45,025.

Our EX had every option that you need and did not have any of the extras that you don’t need. It was very well equipped and had tons of features. Most of us don’t care if we have 17 inch wheels or 18 inch wheels.

A 270 watt stereo sounds just as good as a 650 watt stereo when you can’t even turn it up because you have the family in the car. The only thing that we wish for is the leather seating that is not available in the EX. The stock cloth seats are very comfortable but if you have small children, leather seats are so much easier to clean.

All Honda Odysseys get the same engine and transmission for 2016. The standard engine is a 3.5 liter SOHC V6 that puts out 248 hp and is mated to a 6 speed automatic transmission.

The V6 is smooth and quiet and pulls the 4500 pound Odyssey with ease. It runs on regular unleaded and is rated at 19 mpg in the city and 28 mpg on the highway.

The Odyssey is a great family vehicle and the roomy interior is perfect for hauling people or goods. There are seats for up to 8 people and the easily folding seats make it a breeze to switch configurations.

There is plenty of room for everyone and nobody will complain on a long trip. While there is plenty of space inside, the great thing about the Odyssey is that it does not feel large when you are driving it.

We have always loved the Odyssey and the EX proves that you don’t have to spend a lot of money to get a good family vehicle. In fact, you really do not need most of the features in the higher end models of the Odyssey.

Unlike the majority of the specifics of the 2017 Honda Odyssey that are still unknown, we are virtually without a doubt when it has to do with engine. New version will be powered with 3.5 liter V6 Earth Dreams engine paired with 6-speed automated transmission. At 290 horsepower and 270 lb-ft of torque, the 2017 will be sporty yet deliver 21 mpg city as well as 34 mpg on the freeway – the ultimate transporter for every race crew. There are likewise rumors that new minivan will be offered with brand-new push button-actuated, ZF-sourced nine-speed automatic transmission, that was presented with 2016 Acura TLX.

A quick look and estimation price of 2017 Honda Odyssey, reveal that it will start around $40,000 for the version that has been given some extra trim and additions. Last but not least, it is estimated that the 2017 Honda Odyssey release date will be around November-December in 2016.