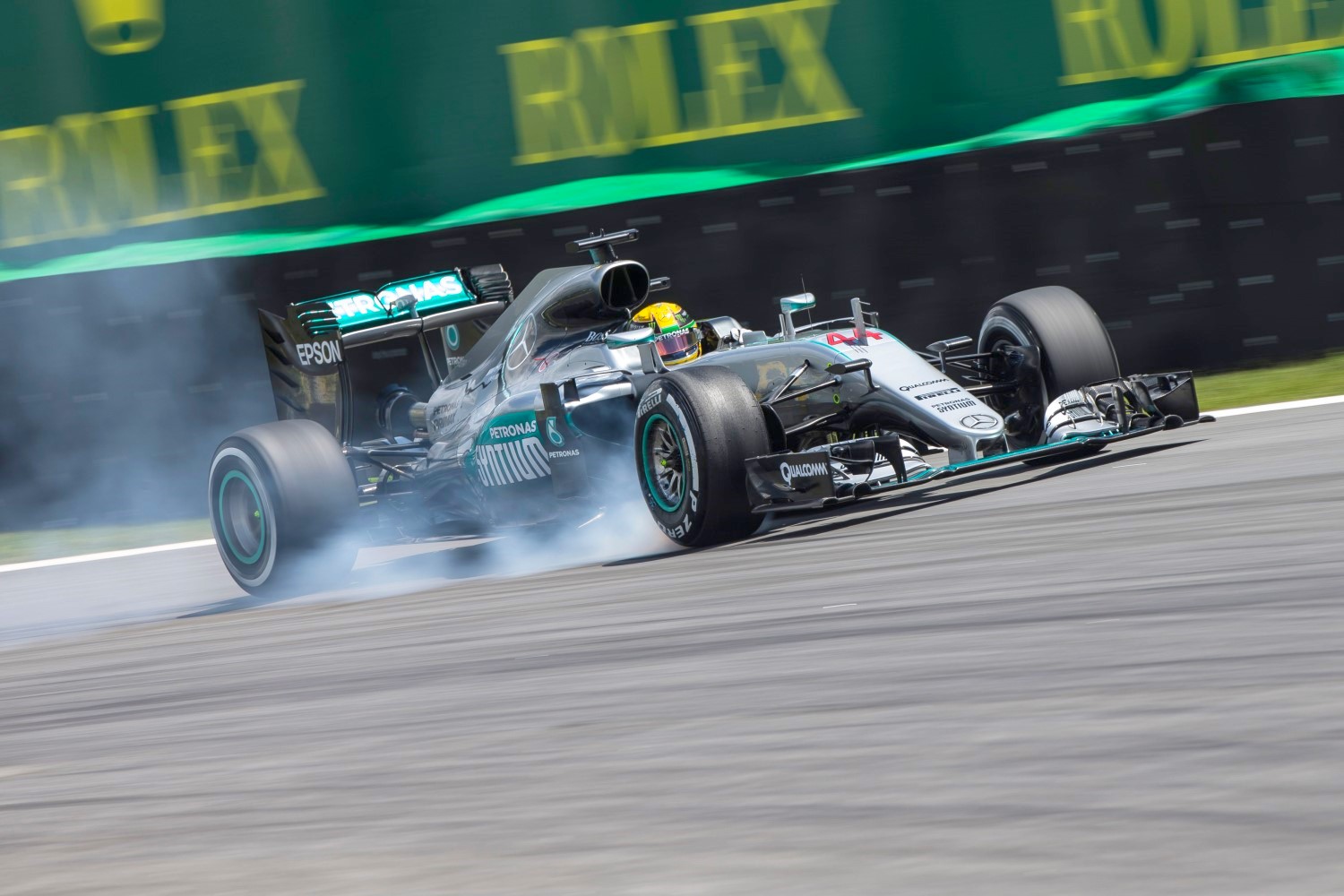 After two red-flag stoppages and several safety-car periods, it was Lewis Hamilton who rode out the Sao Paulo storm to win Sunday’s Formula 1 Grande Premio do Brasil 2016 from Mercedes team mate Nico Rosberg, thus taking their championship battle down to the wire in Abu Dhabi in two weeks’ time. The other star was Red Bull’s Max Verstappen, whose stunning late-race charge hauled him onto the Interlagos podium in the dying laps.

Hamilton led all the way at a sodden Autodromo Jose Carlos Pace in a race punctuated by big crashes for the likes of Sauber’s Marcus Ericsson, Ferrari’s Kimi Raikkonen and Williams’ Felipe Massa – and which witnessed some amazing racing in its closing stages, when conditions finally became truly drivable.

Afterward Hamilton said "it was his easiest win" – one says that when driving an Aldo Costa designed car that generates so much downforce it is like driving on rail, even in the rain. It was his first victory at Interlagos and he now moves into a sole 2nd place in F1 wins with 52, second only to Michael Schumacher. If he keeps driving an Aldo Costa designed car he might just catch him, but needs another 40 wins to do it.

Felipe Nasr finished ninth for Sauber’s first points of the year, lifting them above Manor at the bottom of the table, while Fernando Alonso completed the top ten for McLaren despite a late spin.

Lewis Hamilton
I've just won my first Brazilian Grand Prix! I remember watching Ayrton win back in 1991 and thinking "one day, that's what I want to do". I shared his emotion that day and now I can finally understand how he felt. It's the 44th Grand Prix here as well, so it's a really special one for me. To win on Senna's turn in front of that crowd… it's a moment I'll never forget and I genuinely can't believe it's finally come. It's crazy – all these years it's been so hard to win this race and then today was one of the easiest wins I've had. Of course, in those conditions I could easily have made a mistake at any point. But I was generally very relaxed out there today and felt completely in control. I love driving in the rain. It must come from years of racing around the UK as a kid! It's all in the mind – keeping your cool, not making mistakes, having great reactions and knowing where to put the car. It was one of those races where I was able to focus purely on driving. That one set of tires just kept going and going, I didn't have any problems at all and the car was really fantastic. I'd like to say a big thank you to everyone back at both factories who have worked so hard to give us such an incredible car. This result is all down to them. Every week we're making another piece of history and we've out-and-out proven that we're the best team by far, in every area. Our hospitality is the best, our food is the best, our guys in the garage are the best, the guys back in the factory are the best, our cars are the best… it's so rare to see every area so spot on and I'm proud to be a part of that. I'm glad that it's come down to the last race. All I can do is focus on being as strong as I have been in these past few races. If I can do that, I'll know in my heart what I've achieved this year.

Nico Rosberg
The conditions were really tricky out there today. Up the hill there was heavy aquaplaning and a lot of drivers went off the track. I had a bit of a moment when I spun at one point but luckily this wasn't at high speed, so I was able to catch the car again. Lewis did a better job today and deserved the win, so I must be happy with P2. Max also did a good job. We knew that the Red Bull would be very strong in the wet but he drive a great race. Thank you very much to my team for choosing the right strategy and letting me stay out on the full wet tires. Now I look forward to Abu Dhabi, where I have good memories from last year. I will be going all out for the win there.

Toto Wolff, Head of Mercedes-Benz Motorsport
To come away with such a result in a race like that is really quite something. You simply can't expect a 1-2 in such conditions. It's a rare achievement and the whole team is to be congratulated for that. I'm very happy with the result. When you consider the circumstances, it's maybe the best result of the season. It was a faultless drive from Lewis, with easily the best pace of the field, while Nico showed his strength to stand firm in P2. A word for Max too, who was very impressive today. It was the Verstappen show out there – really unbelievable driving and great entertainment. Also, for Charlie and the Stewards. It's very difficult in these conditions and, overall, they probably made the right calls. I probably wouldn't have stopped the race the last time around because the conditions hadn't changed. But if you have to sit up there, put your neck on the line and take responsibility for the drivers' safety, you might see it from a different perspective. Now, we have a showdown in Abu Dhabi – just as Bernie would have ordered it. Our job is simple – give both drivers the cars they need to fight to the flag on track.

Paddy Lowe, Executive Director (Technical)
Absolutely mind-blowing. To get a 1-2 from a day like that is really incredible. Most of the credit for that must go to the drivers, who kept their heads in very difficult conditions. It was great to see such a thrilling race in the end too for the crowd at this iconic circuit. Such difficult weather makes it tough to run a safe race and their dedication must be applauded. In the end we had a lot of exciting racing, so I'm happy for them. From a technical point of view, to us it was clearly a full wet race all afternoon. Twice, others gambled on the intermediate tire – but we resisted that temptation as the data simply didn't support it and neither did the drivers. On both the initial start and the two re-starts, that proved to be absolutely the right call. Credit to the team and the drivers for making those choices, which won the race for us today. Congratulations to Lewis on becoming the second most winning driver in Formula One history. We now take the Championship finale to the final race in Abu Dhabi, which is a perfect outcome for the sport.

Max Verstappen
I think the word for today is ‘Exciting’. I overtook Nico around the outside of turn 3 which was really fun to do, I just seemed to find a bit more grip out there. I then started chasing Lewis which resulted in me having a massive moment in the final sector, I was really lucky to keep it out of the guard rail. After that scare my pace was still good and I held onto P2. The rears then started to lose grip and I was told Daniel had pitted for Intermediates and was going fast so I followed that plan. For a lap or so it was really good but then more rain came which resulted in no grip in the last sector. There was no way we could carry on so had to pit again for wets. From there on the race was really good fun, plenty of overtakes around the outside because if you stay behind them there’s too much spray, I had to find another line. I just kept my head down and managed to get past quite a few cars in the remaining laps. I could hear the crowd going crazy when my engineer was on the radio, so I’m very thankful for the Brazilian fans for getting behind me. At the end when I crossed the line it felt like a victory, it was almost as beautiful as my race in Barcelona.