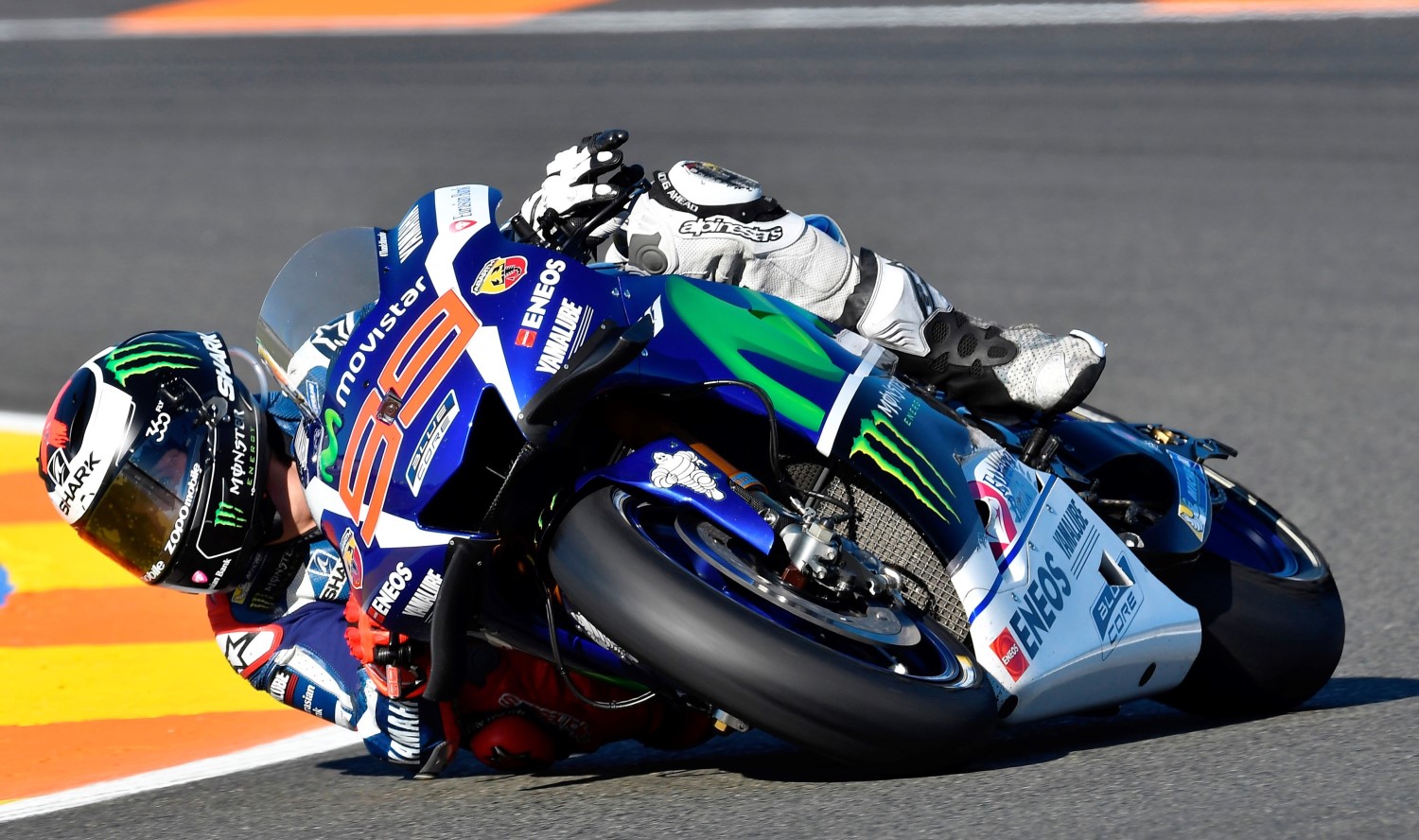 Jorge Lorenzo led from pole to win in his final race with Yamaha but he had to hold off a fast approaching Honda rider Marc Marquez who, after clearing a battle with Valentino Rossi, Vinales and Iannone for second, closed on Lorenzo but it was too late and Lorenzo crossed the line slightly over 1-sec. ahead of the 2016 champion.

Pol Espargaro managed to grab sixth on the line, beating Dovizioso's Ducati in a drag race to the line.

Lorenzo started from pole position after setting the best-ever lap around the 4,005m Valencian circuit, with a time of 1'29.401 yesterday. Using the latest edition MICHELIN Power Slick medium compound front tire, which has a new profile and is aimed for the 2017 season, the Spaniard got the holeshot from the start and led at the end of lap-one.

Lorenzo never came under any real threat at the front and held first place for the rest of the proceedings, setting the race lap record on the fifth circulation as he recorded a time of 1'31.171. He finished the 30-laps in 45'54.228 to set a new race record at Valencia, a feat which Lorenzo had also completed at Qatar during his – and the MotoGP field's – first outing on Michelin tires this season.

As the race progressed Marquez broke the shackles of the remaining quartet and tried to chase Lorenzo, he set many fast sectors as his new for 2017 MICHELIN Power Slick hard compound front tire worked perfectly in the latter stages of the race. Marquez managed to take a large amount of time out of what was now an unassailable lead for Lorenzo, and despite his late charge the five-time World Champion had to settle for second.

A huge and colorful crowd of 110,050 packed the grandstands around the circuit to witness Iannone secure the final rostrum position after a thrilling head-to-head with Rossi which saw the two change places many times. Rossi was fourth with Vinales following him over the line for fifth. Pol Espargaro (Monster Yamaha Tech 3) took sixth and the position of First Independent Team Rider, with Dovizioso a very close seventh.

Jorge Lorenzo
It has been an incredible weekend with a perfect first few laps, the pole position, the fastest lap, and the victory. I arrived here in MotoGP at 20 years old, taking my first pole position on my first race. After almost ten years I leave with a pole position and a victory, I think I couldn't have given Yamaha a better present than this for their support and their hard work during these years. We always had a competitive and winning bike. Now we will enjoy and celebrate these memories. Tonight at the party I will enjoy the last moments with my team. During the race you spend 45 minutes completely focused on what you are doing to dominate this bike, so when you cross the line you aren't very emotional yet and you don't think too much, because you need to recover. After two or three minutes I started remembering the best moments in my career and also the hard moments and in parc ferme it was very emotional with my team. For sure I will throw one of my biggest and craziest parties today because it's a good day. We have to enjoy all of these experiences and especially this last moment with Yamaha.

Marc Marquez
We're happy because we've managed to get on the podium and we've finished the season strongly. This is the most important thing. In the race, the start penalized us a lot as I had an issue with the clutch and lost several positions. Afterward I wasted a lot of time behind Rossi and Iannone. As Valentino said yesterday, overtaking is difficult on this track, so even if I was able to get close, to pass them was another story because I was losing under acceleration and was a bit on the limit under braking. I waited behind as the tires began to affect performance, and step-by-step I continued improving until I found the opportunity to pass them. From then on I was able to improve my speed, and maybe if the race had lasted a little longer I might have reached Lorenzo. Anyway, he had an incredible race and I was not able to catch him. Congrats to him for this result. It hasn't been an easy season but we were able to win the title in Japan and secure the Constructors Championship this weekend, which is great. Now we'll work hard starting from the next test to try and improve our bike even more.