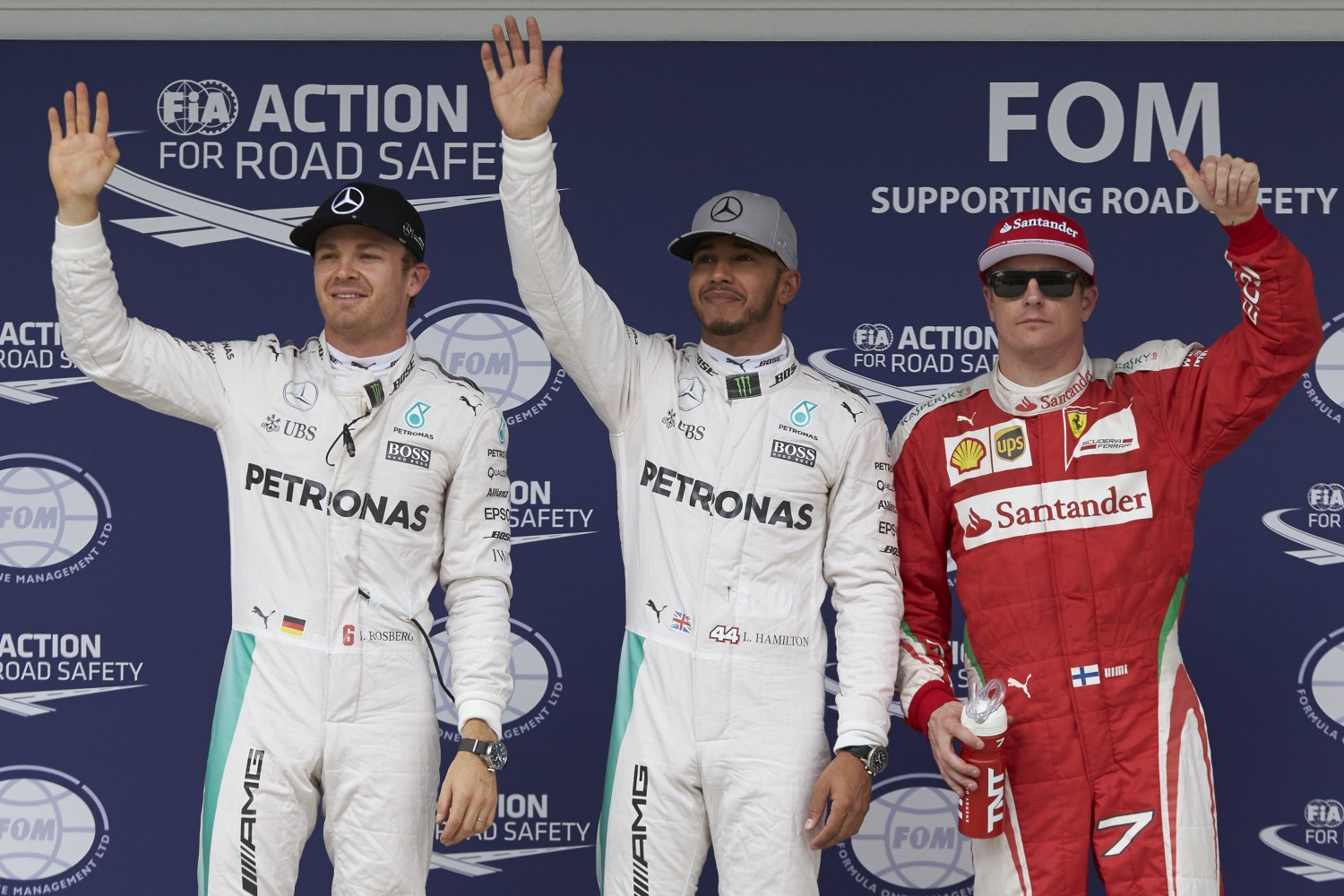 Q: Lewis, a record 19th pole in a Formula One season for Mercedes, but that was a really exciting qualifying session. Is it fair to say that's the hardest you two have pushed each other all season?

Lewis Hamilton: To be honest I don't remember every single qualifying session we've had, so honestly I felt quite comfortable in qualifying, as I have done all weekend to be honest. Nico has been getting quicker and quicker but I've generally had it covered throughout the weekend. But it's just remarkable when you think what this team has done and what we've done with this team. To have that many pole positions is a true showing of incredible teamwork from everyone. This is the best that I could have hoped for really coming to Brazil. I think this is only my second pole here. It's always a track that I've struggled at, so I'm really happy to be up at the front.

Q: Nico, you radioed “traction not great" but the margins were very small. Do you feel that's as hard as you have pushed each other?

Nico Rosberg: Yeah, exciting qualifying our there for sure, very close. Lewis was just marginally quicker in the end and my lap was good as well. Just not quick enough, missing that little bit out there. But it's OK and anyway as we've seen this year pole isn't always the guy who then wins the race, so still optimistic for tomorrow because of course I want to try to win the race tomorrow.

Q: Back to you again Lewis. Some rain forecast for tomorrow. Of course you'll have great memories of 2008 when it was a complete lottery. Would you like another lottery tomorrow?

LH: I don't really mind. I'm ready for whatever.

Q: And how about you Nico. Do you feel you have the most to lose if there's rain and a lottery in the race tomorrow?

NR: I don' think of anything in terms of most to lose at the moment. I just look forward to tomorrow's race and whatever comes comes. We have a great car in either condition, in the dry and in the wet, so it will be exciting.

Q: Thank you for that you two. And Kimi, nice to see you here. Max Verstappen had that third place bought and paid for for most of the qualifying session but you pulled it right out at the end. Where did that come from?

Kimi Raikkonen: I struggled the whole qualifying in a few places, in a few corners in the middle sector. To be honest the last lap it was pretty average from my viewpoint. Obviously it was enough to be in third place. The Mercedes seems to be a bit too far. I struggled the first two corners with the tire warm-up a bit. Even in the middle I wasn't really happy but I don't mind, it was good enough for this and we'll see what we can do.

Q: Back to our pole-sitter Lewis Hamilton. 60 poles, that a big, round number. Thoughts on that first of all and also the fact that you haven't won here and you've got a Senna tribute helmet this weekend. As he always used to say “Tomorrow it has to be my way." Tomorrow, are you going to make it your way?

LH: Of course that's the plan. It's what we've been working towards all weekend. But this is an incredible circuit, even though it's so short, it's incredibly technical and the smallest time makes the biggest difference. It feels a little bit like Donington, sorry Brands Hatch where you can be so close, it's such a short track. But tomorrow, I hope that, whatever the weather brings, we are prepared we are prepared as a team and I give it everything I've got.

Q: Nico, obviously you said earlier on that pole isn't everything. That's been proven several times throughout the course of this year. But the one thing about this race track that is always a bit risky is the start, isn't it? That Turn One, short run but all sorts happens there and through the Senna S. Presumably you'll breathe a sigh of relief once you're on that back straight tomorrow in reasonable shape.

NR: That's another very grim view of it! Not at all, no. I'm looking forward; I'm going to try and get Lewis into Turn One. That's the plan. Obviously it's not going to be easy and the run to Turn One is very short here so that doesn't help, of course but I'll try everything I can, definitely.

[adinserter name="GOOGLE AD"]Q: Kimi, just looking at the way you've performed today in particular, you were quickest in practice in Sector One and Sector Three, which was interesting. And then obviously it took a little while to get it all together but what is it about Sector Two that was causing you problems and Ferrari problems today that you managed, I guess, to finally put right.

KR: I think we're lacking a bit of downforce overall there, comparing maybe to the guys in front of us — but you know the car's been behaving today, pretty good and just been struggling on the tight corners to turn around the car and a bit of front-locking so obviously it's been a bit guessing whether we can turn or not. As I said, it was not ideal, the lap, but it was good enough for third place and even making a perfect lap it wouldn't be fast enough for Mercedes today. But, y'know, tomorrow is another day and we try to improve.

LH: Well, it's Brazil, it's a historic Grand Prix for me, growing up, watching the Grands Prix here. When I was playing computer games it was always the first Grand Prix on the calendar and now that's obviously a long time ago. Knowing that this was Ayrton's home, that always makes it a special event coming here. The track is fantastic, as I said, and the fans are incredibly passionate. It's quite humbling to see how many people come out for this Grand Prix and how much energy they bring with the music and all the beautiful colors. This is a special race which, as I've said, I have not won so that's my goal.

NR: I wish that the fans go crazy tomorrow at the race to wish Felipe a farewell here, and that we get an awesome atmosphere, that would be cool. He deserves that after all that he's achieved in his career and all that he's also done for the Brazilian people, the pleasure that he's given them over the years. Apart from that, for sure, yeah, it's going to be exciting, the battle at the front. Let's see.

KR: For me, it's another race. I've had some good memories here but also some not so good. It will be interesting to see how it goes tomorrow and obviously with Felipe, he's made his decision to do something else with his life and I'm sure he will enjoy it and all the best for whatever he does.

Q: (Leandro Alvares — Autosport Brazil) Tomorrow could be the last Formula One race in Brazil so what do you think about it and do want that this really happens?

LH: Of course not, after all we've just said. I don't know how it is for these guys but obviously I'm aware of the battle that people are having here with the economy and I'm hopeful that with the things that are going on in the world, that will pick up. This is a Grand Prix that must stay, it's a part of Formula One's heritage, I believe, and it's one of those original circuits which we can't lose. The fans are really what make a Grand Prix. There are some Grands Prix we go to and we don't have a third of the fans we get here so for me it's very important, I hope that it does stay but I also understand that there is a lot of money that it takes to put on this event and it could do a lot of great things for this country and for the people here.

KR: Obviously it's not up to us. I think if it was up to the drivers we would come back but this is how it seems to be in many places. The drivers like the places but there's always a question mark whether we're coming back or not. Sadly, it's all about money unfortunately. The best amount gets the race.

Q: (Silvia Arias — Parabrisas) Kimi, congratulations for this position. We are used to seeing Red Bull in this position. I would love to know what difference has been the factor that has made Ferrari much better this weekend, because so far it's really good?

KR: Yeah, but it's been very close. I think it's been very close most of the year and obviously sometimes we've been a bit behind, sometimes in front but I think we've done a very good job in the recent races as a team and improved in certain areas and trying new things. We've learned some positive things and as a team we've worked very well in recent months and I think it's helping us to get back to where we were at the start of the year so hopefully we can have a good strong race tomorrow. It's all about learning from what we've done and improving things. All of us have been pushing in the same direction and it seems to start paying off a little bit.