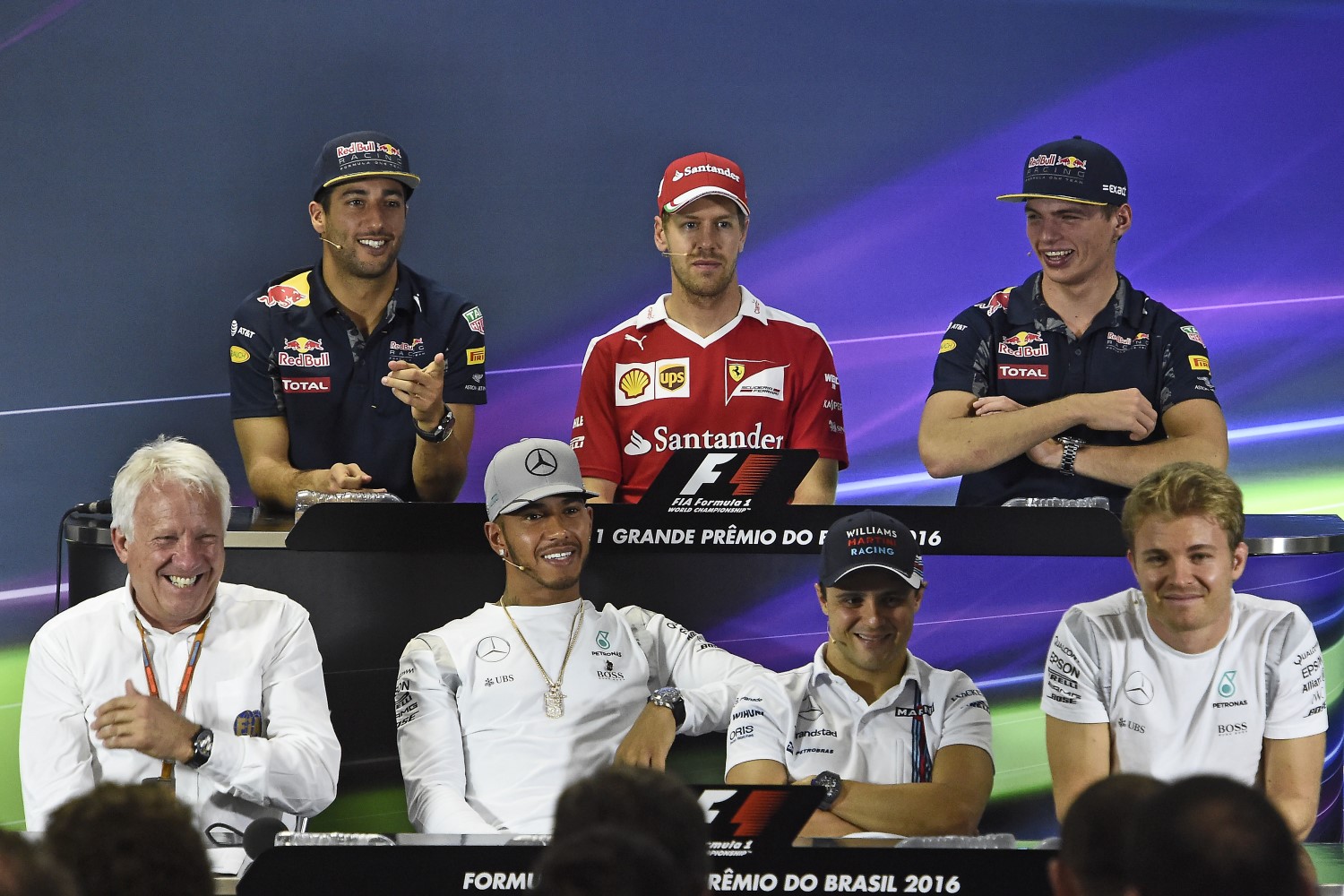 Q: Let's start with Felipe, your last Brazilian Grand Prix as a Formula One driver, what does this weekend, this occasion, mean to you?

Felipe Massa: Well, I think it will be a very special weekend for me, for my last home race, the place where I grew up, the place that I remember I was in the grandstand watching and supporting Ayrton Senna, Nelson Piquet, always dreaming to be here. And then I managed to get here and managed to win two races here in Interlagos, getting quite a lot of times on the podium, so it's definitely a fantastic place for me. I will miss, definitely, this race. When I see these guys racing next year, I will definitely miss to be here. But I am so happy and proud for everything I passed through these 15 years in Formula One, every people that I met — friends, drivers, the competition I had with these guys for quite a long time. So yeah, I will miss, definitely, this place, some nice races around the world but also some friends. It will be a very special moment for me.

Q: As you say, so many great memories from your own career here, especially the pole positions, the podiums and those two very special wins with Ferrari. What stands out, though, for you, and what were these guys like to race against?

FM: Difficult. We are talking about the best drivers in the world. Everybody who got here is here because of talent. They are here because of talent. The competition is really high, but I think I definitely learned a lot. I think it was an amazing life experience that I had. It's definitely not easy to be a Formula One driver I would say, but I had a fantastic time and so happy to achieve what I managed to achieve and to get here after very long and yeah, I will always remember them as tough drivers on track and I would say maybe the relationship maybe in the last years gets a little bit better outside the track and it will get even better when all of us stop I would say. Just expect the best for them and support them for the future.

Q: OK, thank you. Lewis, of course that 2008 memory is still very strong. You won the world championship, your first of three world championships, that day but Felipe showed great dignity on the podium, having won the race. What was he like as an adversary?

Lewis Hamilton: It's been great driving alongside Felipe and against him. We've had some great times. Even before I got to Formula One, when I was in GP2, we had already become friends back then and had some good experience. But yeah, to have those great, strong battles we had, even beyond 2008, for me was a privilege and something that I will always cherish. At some stage we'll be a bunch of oldies, replacing the older drivers that are hanging around today and we'll be coming along, looking at the other youngsters, but yeah I think Formula One is going to miss him for sure.

Q: OK, and the other drivers, your thoughts on Felipe's final race here as part of his Formula One career. What kind of atmosphere do we expect at this Brazilian Grand Prix this weekend?

Nico Rosberg: It will great. I'm sure the Brazilians will go crazy to support Felipe in his last race here. He's given a lot to F1 so it's going to be a loss for the sport, for us, for sure.

Max Verstappen: Of course, I mean the career he has had many want to achieve. That many years in Formula One as well, and being able to fight for four world championships. So I think it will definitely be a very special moment for him and I think, in general, the Brazilian Grand Prix is always very special and a great track and a great atmosphere to be at.

Sebastian Vettel: Yeah, I think… well, we don't need to talk about his talent. I think there's no doubt that he's one of the most talented drivers on the grid. But apart from that, he's a great person. He's the kind of person you look at and smile, because he's just smiling from the inside, so I think that will be missed a lot. So I hope he still comes around a couple of times and has a look and a laugh and in that regard I wish him the best. But for this weekend, I think it would be great to see hopefully a lot of Brazilian flags, support for him, because as everyone said, he has had a great career. So, yeah, it's hid weekend.

FM: Be careful what you say!

[adinserter name="GOOGLE AD"]Daniel Ricciardo: Yeah, I'm looking forward to the drivers' parade on Sunday. It's always very interesting. For as long as I've been doing it at least anyone who is Felipe's team-mate gets an absolute pounding on the drivers' parade. He's going to get some extra love this weekend and we'll probably get yelled some funny Brazilian names, but it's all in good humor. The atmosphere is awesome, so I think we are going to have a pretty amazing crowd this weekend.

Q: Thanks for that. Back to Lewis and Nico then. Two races to go and Nico a win for you on Sunday and you're world champion. Lewis, a great motivation for you to win a Brazilian Grand Prix you haven't won before. How are you both feeling going into this? Is the tension rising? Nico, first…

NR: Yeah, feeling great, of course, because it's awesome to be fighting for the world championship with two races to go and so, yeah, excited about the weekend, looking forward to it and of course going to try to go for the win.

LH: yeah, I've had lots of great, or mixed experiences here, so it's a real challenge to come here and try to win for the first time, something that Nico and Felipe have experienced in the past. That's my goal and nothing really to lose.

Q: For the drivers on the back row, with the nature of this track and also the weather forecast we have at the moment for this weekend, what's the scope for racing against these two guys at the front this? Daniel…

SV: I think this place for some reason has always delivered special races. I don't know what it is: I think the circuit is good fun, nice to drive, but I think it's the atmosphere, the weather, all that coming together that has created crazy races in the past. You mentioned the one in 2008, the last race in 2012 was pretty amazing as well. I'm sure we'll have a great race on Sunday. Obviously for all of us not fighting for the championship, we are fighting for the victory here, but yeah, we'll see. Weather conditions and so on, as I said, there's always room to do something.

Q: Max, a potentially winnable race for you?

MV: You always try, but I haven't really experience a lot of mixed conditions here in Brazil. Of course I've seen a lot on the TV. But it will be interesting like always. I really enjoyed it last year and hopefully with some rain coming in it would be even more interesting, so I'm looking forward to the weekend.

DR: Our meat feat yesterday was… very good. Fortunately it's no longer with me, otherwise I would still be sweating. But yes, how do you say… muito bon?

Q: (Kevin Eason — The Times) Seb, can you tell me, do you believe… You've had a pretty fruitless year with Ferrari and you started with bit of a dream. Do you believe you'll ever win a world championship with Ferrari.

SV: Because, generally I think I'm positive, looking forward. Obviously it was a big step when I decided to change, at the time when I did. It was clear that it would take some time. Obviously we had a great season last year, we got closer and closer to Mercedes, so the hopes and expectations for this year were high. I think it's normal when you finish second in the Constructors' you aim to finish first. We haven't achieved what we set out to achieve but nevertheless our main target is to win the championship, fight for the championship, and I think there is a lot of change that I see, a lot of change that is going on inside the team that will make us stronger, I'm pretty confident about that. I guess it's a question of time.

Q: (Livio Oricchio — GloboEsporte.com) To Nico and then to Lewis. You won the last two races here starting from the pole position and Lewis also I recognize that you were very strong both weekends. Can you explain if you find something special, some special way to win here. And Lewis, why you've said he's so fast and you could not reach him in the last two Brazilian Grands Prix?

NR: I love the track. It's a great track, feels good and I've always gone well here, so I'm looking forward to the weekend also. Great memories also from those two wins, those were very special. But at the same time, this year we all start from zero. Those past wins are not going to help me get the win this weekend. We all start from the same place and I just need to do a good job this weekend and that's it.

Q: (Dan Knutson — Auto Action and Speedsport) Felipe, there are going to be a lot emotions leading up to the red lights going out. How difficult will it be to switch off when the red lights go out?

FM: I think it's always the same. I think when you are in the car you don't think about other things, you just think about what you want to do in the best way that you can. I would say that maybe the whole race I will be concentrating on my job, trying to get the best race possible, the best result I can, for me, for my team, especially in this moment that it's quite important this fight with Force India for Williams Martini. But I think that maybe when I finish the race, after the checkered flag, I think it will be very special. It will be an amazing feeling to do the last lap in Interlagos of my career in Formula One, here, you know. I think during the race you just so much concentrate on everything you need to do but after it may be quite different.