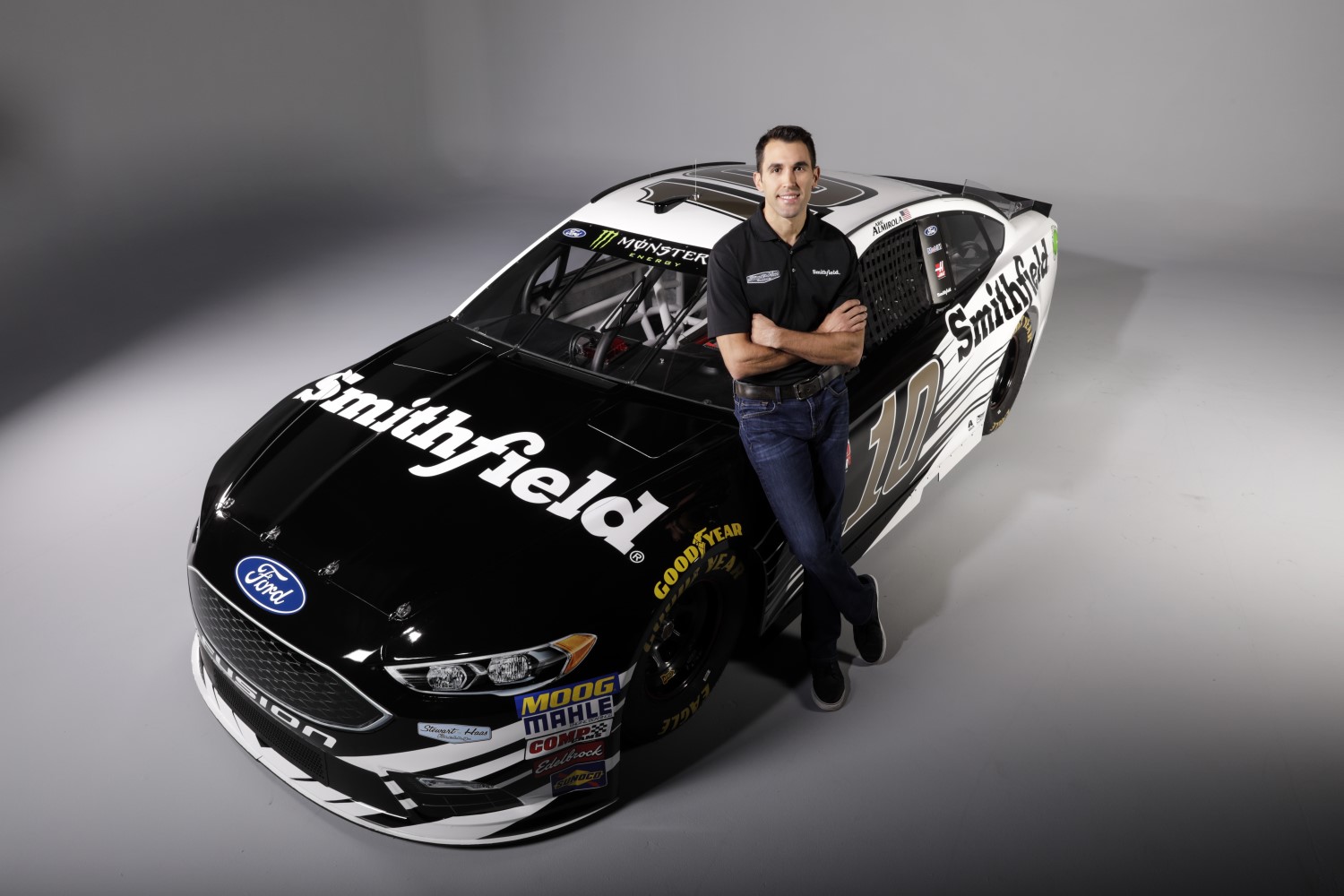 UPDATE This rumor is upgraded to 'fact' today. Stewart-Haas Racing has signed Aric Almirola to join its Monster Energy NASCAR Cup Series lineup in 2018. The 33-year-old from Tampa, Florida, will drive the team’s No. 10 Smithfield Ford Fusion – the #10 was Danica's car so she is definitely gone.

“I’ve known Aric since 2004 and have always been impressed with him on the racetrack," said Tony Stewart, who co-owns Stewart-Haas Racing with Haas Automation founder Gene Haas. “I’ve raced with him and seen him mature into a really good racecar driver. He can compete for wins here at Stewart-Haas Racing and help our other drivers compete for wins. He’s an excellent fit for this team and for Smithfield."

“This is the opportunity every racer wants," Almirola said. “Stewart-Haas Racing is an experienced organization with a lot of depth, great technical support from Ford, and staffed with racers from top to bottom. They lean on each other, challenge each other and make each other better. I’m really looking forward to being a part of that.

“I’ve known Tony Stewart since our time together at Joe Gibbs Racing. I know what he expects and he knows my commitment. I can’t thank him and Smithfield enough for believing in me and providing this opportunity."

“This is a great moment for Aric, and Smithfield is very happy to be a part of it because it’s a great opportunity for our company," said John Pauley, executive vice president of sales and marketing, Smithfield. “Obviously, we strongly believe in Aric’s ability and that of Stewart-Haas Racing, and those abilities transcend the racetrack. They want to consistently run up front and contend for wins, but they’re also very interested in helping us win in the marketplace. This is a strong partnership with outgoing personalities who are driven to succeed."

Almirola’s path to NASCAR started in his home state of Florida, beginning in karting in 1992 before advancing to open-wheel modifieds in 2000 and then late-model stock cars in 2002. In late 2003 at Hickory (N.C.) Motor Speedway, Almirola participated in a driver combine for Joe Gibbs Racing and was ultimately selected as one of the first two drivers for Gibbs’ diversity program, which launched in 2004. Almirola became a teammate of Stewart’s, who was in his sixth year as a NASCAR Cup Series driver and only two years removed from the first of his three NASCAR Cup Series championships.

Nine wins and 11 poles during the 2004-2005 seasons of the NASCAR Whelen All-American Series allowed Almirola to advance from local short tracks in the southeast to a fulltime, national schedule in the Camping World Truck Series in 2006. A handful of Xfinity Series starts also came in 2006, and Almirola’s NASCAR Cup Series debut took place on March 11, 2007 at Las Vegas Motor Speedway, three days shy of his 23rd birthday.

11/03/17 Aric Almirola is set to get the biggest opportunity yet of his NASCAR career.

Almirola, who is in his last season driving for Richard Petty Motorsports in the Monster Energy NASCAR Cup Series, will be the new driver of Stewart-Haas Racing’s No. 10 Ford team next season, Motorsport.com has learned.

Almirola, 33, would replace Danica Patrick, who announced in September she would not be returning to SHR next year in part due to lack of sponsorship.

SHR on Thursday issued a media advisory for a news conference next Wednesday at its headquarters in Kannapolis, N.C., in which it will unveil its newest Cup series driver. Sources familiar with the announcement confirmed Almirola would be the driver.

SHR officials did not immediately return a request for comment.

In recent interviews with multiple media outlets – some as recently as last weekend – Almirola has said his 2018 plans were not yet set. Motorsport