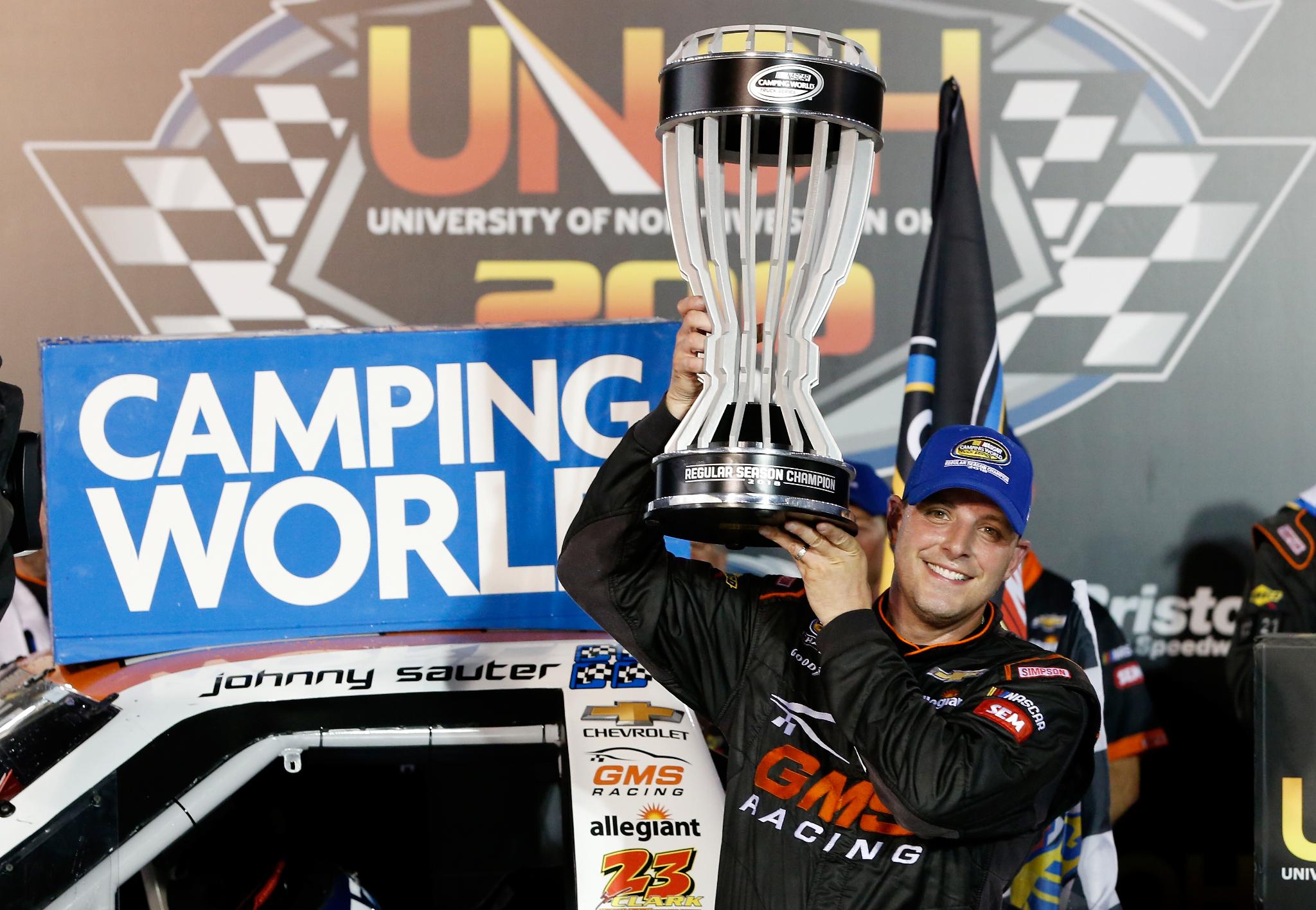 Johnny Sauter scored his fifth win of the season and secured the top seed in the NASCAR Camping World Truck Series playoffs with a victory in Thursday night’s UNOH 200 at Bristol Motor Speedway.

The 2016 truck series champion capped off the 2018 “regular season" by passing race leader John Hunter Nemechek with five laps to go and then held off Stewart Friesen to take the checkered flag for the 22nd time in his career. Friesen came home second while Nemechek held on to finish third.

Sauter’s victory was his first ever at Bristol and breaks a tie with Brett Moffitt for most wins in the truck series this season so far – putting him in the playoffs as the top seed.

“I’m so proud of this team," said Sauter. “I knew we had a great truck today. What a way to cap off the regular season with a win. I had to race really hard with the 52 (Friesen) there for a while, which was exciting.

[adinserter name="GOOGLE AD"] “I’ve never won at Bristol before, so I was pumped," Sauter said. “I’m so lucky I’ve got this group of guys. We won at Bristol—this is the ultimate. For a short track guy, and I consider myself a short-track guy, to get a win at a place like this is so special. I’m just pumped, and I can’t wait to start our championship run."

Moffitt claimed the second seed, while regular season race winners Noah Gragson and Ben Rhodes were already locked in and claimed the third and fourth seeds.

Nemechek had been the class of the field all night, leading a race-high 104 laps and winning both the first and second 55-lap stages before Sauter cycled to the front at the start of the third stage.

Sauter would hold the top spot for the better part of 45 laps before getting mired behind a pack of lapped cars that held him up just long enough for Nemechek to track him down and make the pass for the lead on the high side.

Back out in front, Nemechek started to pull away, but lapped traffic again became a factor and Sauter started reeling the leader back in.

On lap 196, Nemechek slowed dramatically on the backstretch and Sauter pulled even with the leader, making the final pass for the lead on the low side coming through turns three and four with Friesen right on his bumper.

Friesen looked to have a chance of getting to Sauter on the next lap but Sauter threw a block using a the lapped truck of Clay Greenfield as a pick, which gave him just enough of a cushion to hold on to make it to the finish ahead of Friesen, who finished runner-up for the third time this season but managed to race his way in the playoffs as the fifth seed.

“That was probably the most fun I’ve had all year," Friesen said. “Bumping and grinding, and no better guys to race with than John Hunter and Johnny. We’ll take it and move on."

Nemechek, who is running only a part-time schedule in the truck series, said a fuel pump issue cost him the race.

“At a loss for words. We put on a clinic tonight, led a ton of laps!" Nemechek tweeted after the race. “Had motor issues at the end of the race while leading and came home 3rd. Another one that slipped away! Learn from it and get better! Looking forward to the future."