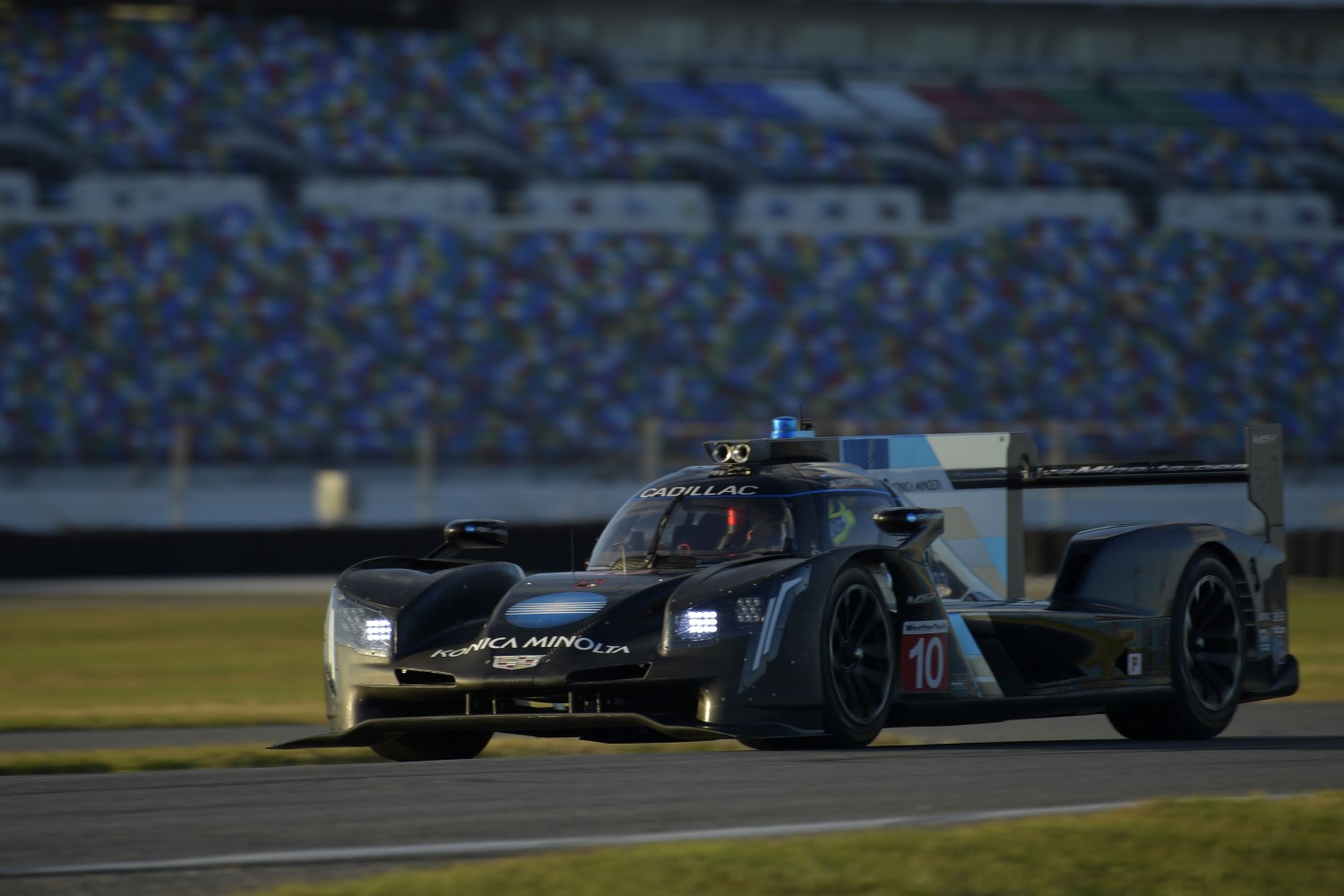 While some of its competition has been logging lots of test miles over the past couple of months, the No. 10 Konica Minolta Cadillac DPi-V.R from Wayne Taylor Racing returned to the racetrack for the first time since October’s 2017 IMSA WeatherTech SportsCar Championship season-ending Motul Petit Le Mans in this week’s test at Daytona International Speedway.

The team, which won the 2017 Prototype title with co-drivers Jordan and Ricky Taylor, is sporting a new look and new lineup for 2018, as Ricky Taylor joined the new Acura Team Penske program and Renger van der Zande moved over from VISIT FLORIDA Racing as Jordan Taylor’s new full-season teammate.

“It’s good to have Renger," said Jordan Taylor. “We haven’t had a ton of driving time together. Yesterday, he was in the car a little bit and right up to speed, as expected. He fits in really well with the team. He’s got a great personality and a good sense of humor. I think with our team, we’ve got a lot of guys that like to have a good time. We take things seriously, but at the same time, we can throw some jokes around. Renger fits in very well with that.

[adinserter name="GOOGLE AD"]“Driving-wise, he seems to fit right in. It’s still going to take some time to understand driving styles, how we fit together, and how the engineer works with us both in compromising the setup. It’s a good start, and I’m glad we could have this December test as a little prep heading into the Roar."

At least in terms of on-track activity, the workload has been somewhat lighter than it was a year ago as the team readied the new Cadillac DPi-V.R for its WeatherTech Championship debut. The hard work paid immediate dividends, as they won the first five races of the season on their way to the 2017 title. Jordan was eager to get back on track this week.

“Any time you can get out testing, especially here at Daytona, it’s valuable," he said. “We haven’t been on track since Petit, so it’s valuable for us to get the car back on track and get learning. Last year at Daytona, we had our brand-new Cadillac and we did a lot of testing, but no real development on the car. Over 2017, we developed it, obviously, so now is the time that we can put that all together and see how it translates to Daytona. We’re excited to be back. It’s great to be here in the run up to the Rolex and the Roar Before the 24.

The two-car Ford Chip Ganassi Racing team, which won the GT Le Mans (GTLM) class in the 2017 Rolex 24 At Daytona, will return with the same driver lineup it has used for the past two WeatherTech Championship seasons.

Sharing the No. 66 Ford GT on a full-time basis will be Dirk Mueller and Joey Hand, while Richard Westbrook and Ryan Briscoe are slated to again co-drive the No. 67 Ford GT. IndyCar stars Sebastien Bourdais and Scott Dixon will complete the respective driver lineups in the No. 66 and 67 for endurance races.

The most notable difference heading into the season is a revised paint scheme for the two cars, which broke cover this week at the Daytona test. While still red, white and blue, the shades of each correspond to the colors available on Ford GT production models. So, it’s now “Liquid Red," “Lightning Blue," and “Frozen White."

And while the new colors are flashy, they may not offer much assistance in the speed of the race car.

“It would be easy to tell the engineer, ‘I need more blue,’ and then we go a second faster," Mueller said. “Unfortunately, it doesn’t work that way."

The continuity within the team, however, likely does have benefits.

“It’s really good," Mueller said. “It’s one big family, it’s one big crew, and everybody knows what the other one is doing. That really helps the whole program, being up on top. Everybody on the team is high level. Ford Chip Ganassi Racing is operating on such a high level. Like our boss, Chip, says, he likes winners, so we need to make that happen so that he likes us."

It was a mix of familiar faces and newcomers on Wednesday at the IMSA Continental Tire SportsCar Challenge December test at Daytona International Speedway.

The single-day test offered an opportunity for GS and TCR teams to experiment ahead of January’s Roar Before the Rolex 24 weekend and season-opening BMW Endurance Challenge at Daytona.

On hand was 2017 GS class champion Dillon Machavern, co-driver of the No. 18 YouRulz/Friction-One Porsche Cayman GT4 MR for RS1. At this time last year, Machavern and RS1 were preparing to compete in their first year of GS competition, but after a stellar championship-winning season – which included one win and three additional podium finishes – the team returns to Daytona in sync.

“Soaking in the championship probably lasted a couple days and we were right back to figuring out what we were doing for the season," said Machavern. “I think everybody deserved a break after working so hard last year. It was really nice to get to relax, but I’m excited to be back with the RS1 guys.

“It’s definitely great for everybody to be on the same page. We’re all coming back as a cohesive unit knowing what’s going on, which is pretty awesome, whereas last year, although RS1 had been ST champions, stepping up to GS was a big change for everybody. It was definitely a learning curve at every racetrack we showed up to. Coming back with some data and knowledge of what we’re getting into is extremely helpful."

One of the series’ new teams facing that learning curve in 2018 will be Winward Racing/HTP Motorsport. Team Manager Grant Barclay is confident that his lineup – with former CJ Wilson Racing co-drivers Damien Faulkner and Russell Ward – and the team’s experience with the new Mercedes-AMG GT4 in other series can combat potential issues.

“I think it’s going to give us, I wouldn’t say huge advantage, but it should equalize a lot of stuff for us," said Barclay. “For Russell in 2017, most of the tracks were the first time he had ever been there, with an exception of some of the west coast events. We’ve seen a huge improvement for him as he goes back to a track, learning to become familiar with it. He and Damien work great as a partnership, and Damien is such a great coach and an awesome driver to boot.

“Winward was contracted with HTP to provide support, transport, crew, and as much effort as we could, so we just wanted to do a good job for the AMG guys… If I had to summarize the test today, it went really well. Anytime you load the car under its own power at the end of the day’s testing is a good day."

A wealth of TCR cars also took to the track for the first time under an IMSA-sanctioned event. After moving up its ST program to the TCR ranks, C360R brought two Audi RS3 LMS cars to test at Daytona. Shortly, additional driver lineup information will be available for C360R, which also plans to compete in GS.

The Continental Tire Challenge returns to competition at the Roar Before the Rolex 24 test weekend on Jan. 5-7, 2018. The first race of the season, the four-hour BMW Endurance Challenge at Daytona, is scheduled for Jan. 26. Tickets for both events are available at www.daytonainternationalspeedway.com.