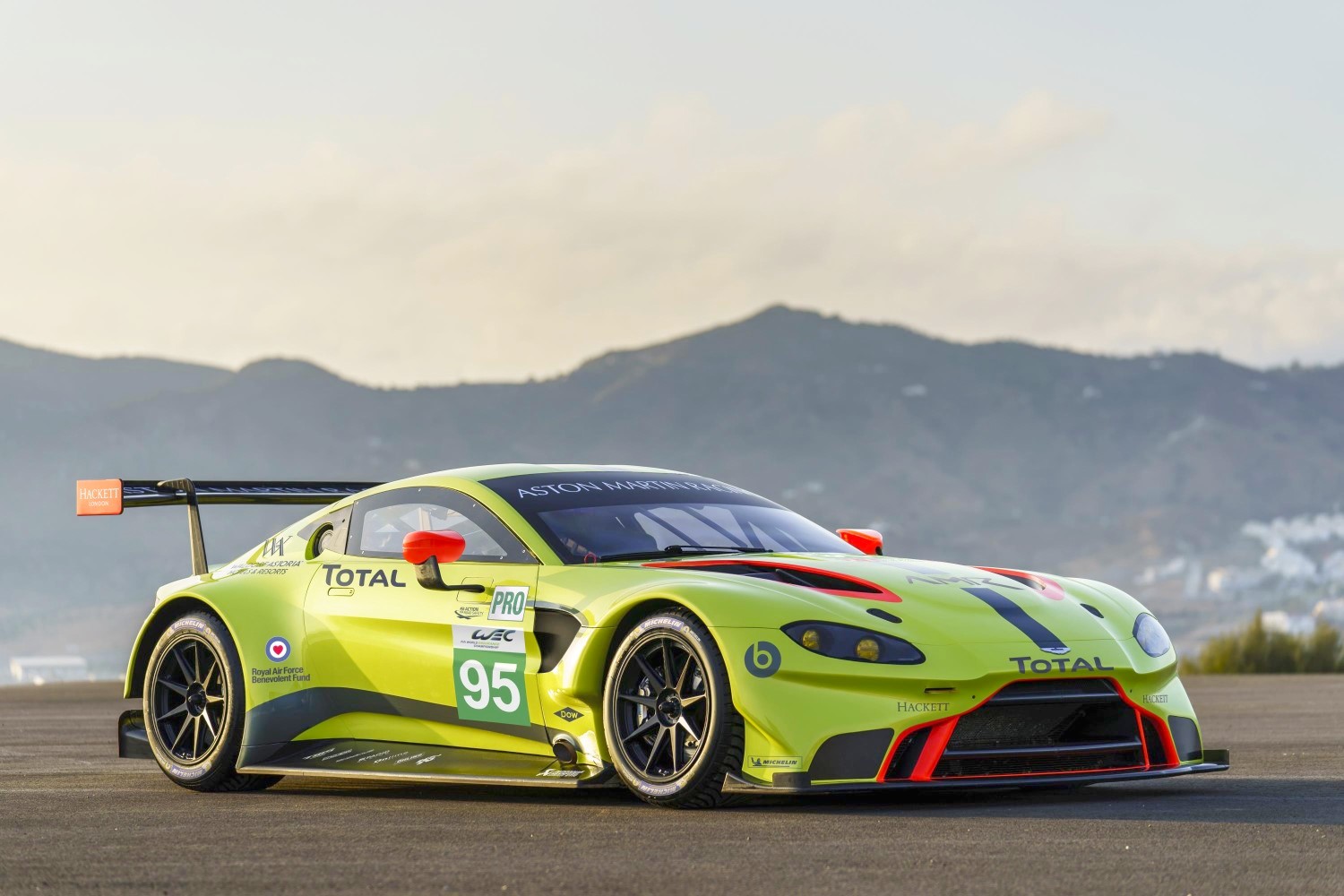 Built to comply with the FIA’s strict GTE class regulations, the new Vantage GTE takes the road car’s core design and dynamic capabilities to a whole new level through extensive optimization of the powertrain, chassis and aerodynamics. Designed and engineered in-house at Aston Martin Racing’s headquarters in Banbury, the project is led by Technical Director Dan Sayers, who also guided the design and development of the current V8 Vantage GTE – the car credited with 37 of the team’s 51 international race victories, including two Le Mans 24 Hour class wins.

Though the new Vantage road car has only just been launched, development of the new Vantage GTE race car is well advanced, with more than 13,000km of testing completed, including a successful 30-hour run at the Spanish circuit of Navarra. The car has also been through a rigorous durability program at the notoriously rough Sebring circuit in Florida. All of Aston Martin Racing’s current drivers have contributed to the test program.

[adinserter name="GOOGLE AD"]Reliability has been exceptional straight out of the box, while the drivers have reported the car is easier to control on the limit than its predecessor – something that will make the Vantage GTE especially attractive to competitors in the GTE Am class, where top-level amateurs race alongside professional teammates. Together with Aston Martin Racing’s engineers, the factory drivers have worked hard to optimize the drivability and performance of the base Mercedes-AMG 4.0-litre turbocharged V8 engine, that has been developed for use in the Vantage GTE application by Aston Martin Racing.

Aston Martin Racing is working with new technical partners: Alcon for the braking system, Ã-hlins for the suspension and Michelin for a bespoke tire program to maximize the performance of the Vantage GTE. Also, the in-house Aston Martin Design team, led by Chief Creative Officer Marek Reichman have taken their intimate knowledge of the road Vantage styling and amplified it for the WEC version. The result is an extreme and exciting evolution of an already aggressive road car design – a lesson in Aston Martin’s ethos of pure form and function.

Aston Martin Racing is also proud to announce a range of partners who will support the team throughout the 2018/19 season.

The team are also proud to confirm that Total will continue as Official Lubricant Partner. After joining the team at the beginning of 2016, Aston Martin Racing and Total have together delivered two world championships and a win at the 24 Hours of Le Mans, underlining the success of the relationship.

Aston Martin Racing is also proud to announce a range of new partners to the fold. One of the world’s most prestigious hotel brands, Waldorf Astoria, becomes the team’s Official Hotel Partner, whilst Beats by Dr. Dre, the leader in premium consumer headphones, earphones and speakers, joins as Official Audio Partner.

Aston Martin Racing Technical Director, Dan Sayers said of the 2018 Vantage GTE: “Designing and developing this new car has been an extremely satisfying process. We’ve collaborated closely with Aston Martin’s Gaydon headquarters to develop the road and race cars in parallel. Attention to detail has been a priority at every step of this process and we’ve made big improvements in each area of the car. We’ve spent every second optimizing the design right until the build of our test car, which has paid dividends during our current testing schedule. This project has been one of the most intensive but also rewarding of my career so far".

John Gaw, Managing Director, Aston Martin Racing said, “It’s terrific to be involved in this exciting new chapter for Aston Martin Racing. The increasingly tough competition in the GTE class and the prospect of two visits to Le Mans and a return to Sebring within the 2018/19 super-season is thoroughly tantalizing. To conduct the development process of this car so closely with Aston Martin’s design and engineering teams was essential for both road and race car to retain the same underlying DNA. We believe the Vantage GTE will bring further success worldwide to Aston Martin Racing in the coming years".

President of Aston Martin Racing, David King said, “Motorsport is fundamental to the DNA of Aston Martin and our commitment to the FIA World Endurance Championship is stronger than ever. This is a golden era for GT racing and today’s launch of the new Vantage GTE will ensure that Aston Martin Racing remains at the forefront of the world’s greatest endurance series. The team has enjoyed incredible success over recent years with the outgoing V8 Vantage GTE and while this will hold fond memories for me, I can’t wait to see the new car race in anger at Spa next year and continue to write motorsport history".